Updated : January 24, 2020 02:58 PM IST
The designer, famous for his painstakingly crafted and impeccably tailored fashion, was on invite by Chambre Syndicale de la Haute Couture.
Mishra was in hallowed company with couture designers such as Valentino, Iris van Herpen, Zuhair Murad, Balmain, Chanel, Dior, Maison Margiela and Schiaparelli.
His nature-inspired minimal and beautifully structured collection was inspired by various influences — the movie Madagascar, Henri Rousseau’s painting The Dream and his recent travel to SonevaFushi in the Maldives.

On Thursday, January 23, 2020, when Rahul Mishra walked down the ramp on a cold Parisian evening, he created history by becoming the first Indian to be invited to showcase his haute couture at Paris Haute Couture Week January 2020 for spring couture. He was on an invite by Chambre Syndicale de la Haute Couture, a prestigious governing body of the French fashion industry that dictates the line-up at couture week.

A seminal moment not just for Mishra but also for Indian couture, which for a rather long time was considered synonymous with over-embroidered and bling-infused wedding couture. Over the last few years, designers such as Tarun Tahiliani and Sabyasachi have been infusing their aesthetics into couture creations (though, even they haven’t been able to break out of the wedding segment), raising it quite a few notches higher. Mishra’s this week showing at the Paris Haute Couture Week can be considered the cresting of the steady transformation of Indian fashion. The designer, a postgraduate of NID Ahmedabad, is not new to Paris. In 2014, he took his understated label to Paris for the spring/summer 2015 showcase at Paris Fashion Week. In the same year, Vogue’s international editor, Suzy Menkes called him India’s “national treasure” after he won the 2014 International Woolmark Prize. Incidentally, he was also the first Indian designer to win the title. But Paris Haute Couture Week is a completely different ball game. Considered among the top three fashion weeks in the world, he was in the hallowed company of global fashion czars such as Valentino, Iris van Herpen, Zuhair Murad, Balmain, Chanel, Dior, Maison Margiela and Schiaparelli. For recognition by the FHCM, a fashion house must show a consistent track record of being able to consistently create an original global voice. “It is important for the brand to showcase a mix of new technology, fresh aesthetics along with traditional value,” Mishra says. 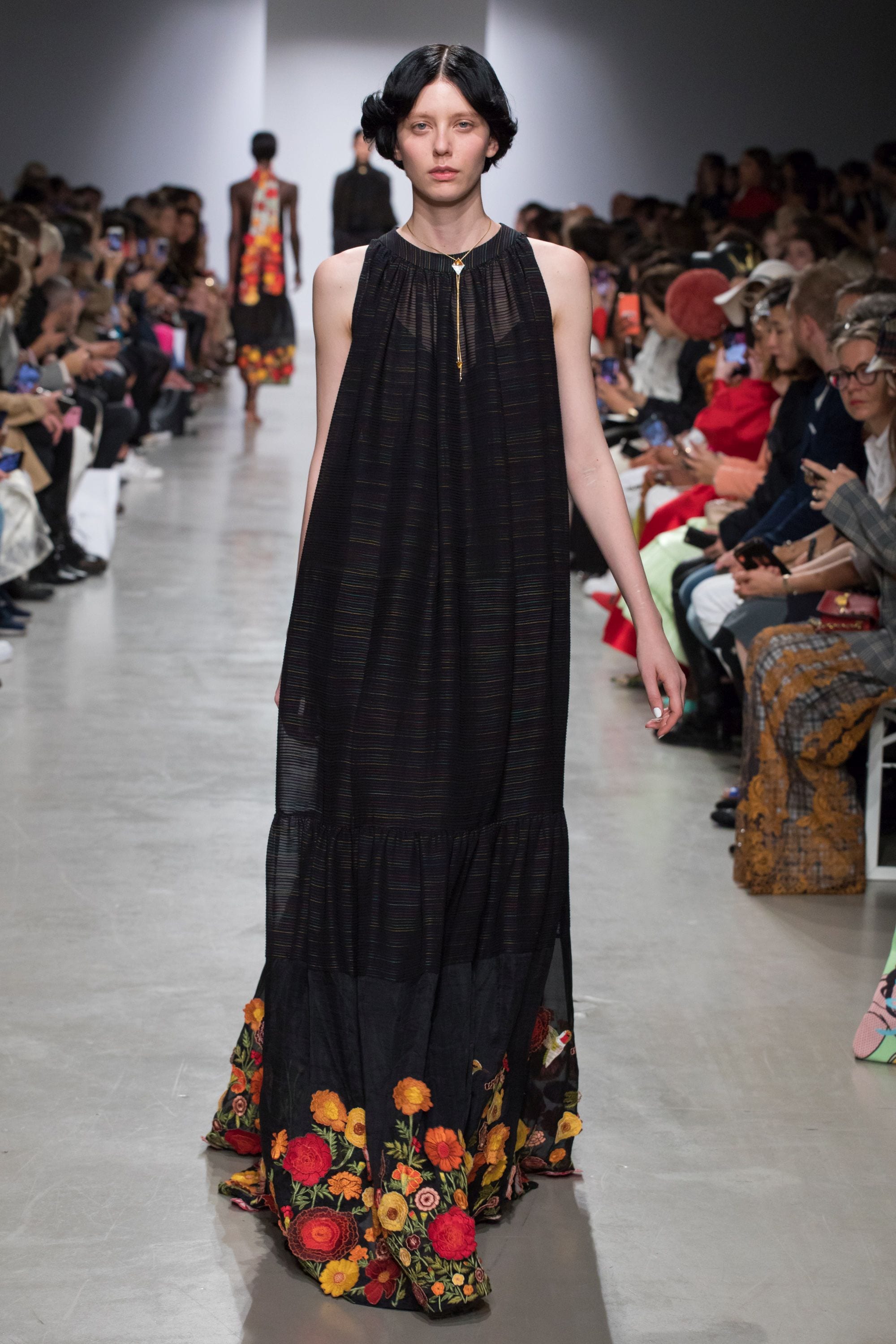 His jungle-themed collection was inspired by the 2005 DreamWorks animation Madagascar, a movie he’s watched 35 times, Henri Rousseau’s painting The Dream, medieval Indian paintings and his recent visit to sustainable luxury resort SonevaFushi in the Maldives. Mishra took inspiration from “underwater landscapes and tropical flora, marked by their contrast with the polluted landscape of New Delhi”, a city he calls home. Quoting Neil Armstrong (‘it suddenly struck me that that tiny pea, pretty and blue, was the earth. I put up my thumb and shut one eye, and my thumb blotted out the planet Earth. I didn't feel like a giant. I felt very very small’), Mishra says, “The privilege of travel enables the genesis of fresh perspectives. On a recent trip to Soneva Fushi, as I submerged myself quite literally into an unfamiliar world, a series of stark realisations dawned upon me. Mesmerised by the million shades of blue, the ever-changing abstract shapes made up of a diaspora of fish, the alienesque under-water foliage and the striking corals, it was a mammoth task to register the beauty unfolding before me — an experience that was equal parts surreal and humbling. I have explored the notions of a habitat enveloped in memories, the subtleties of nostalgia guiding my past collections. But the current reality of it all is daunting, to say the least. My four-year-old daughter, Aarna, longs for a clear blue sky as pollution levels in New Delhi are alarmingly high.” 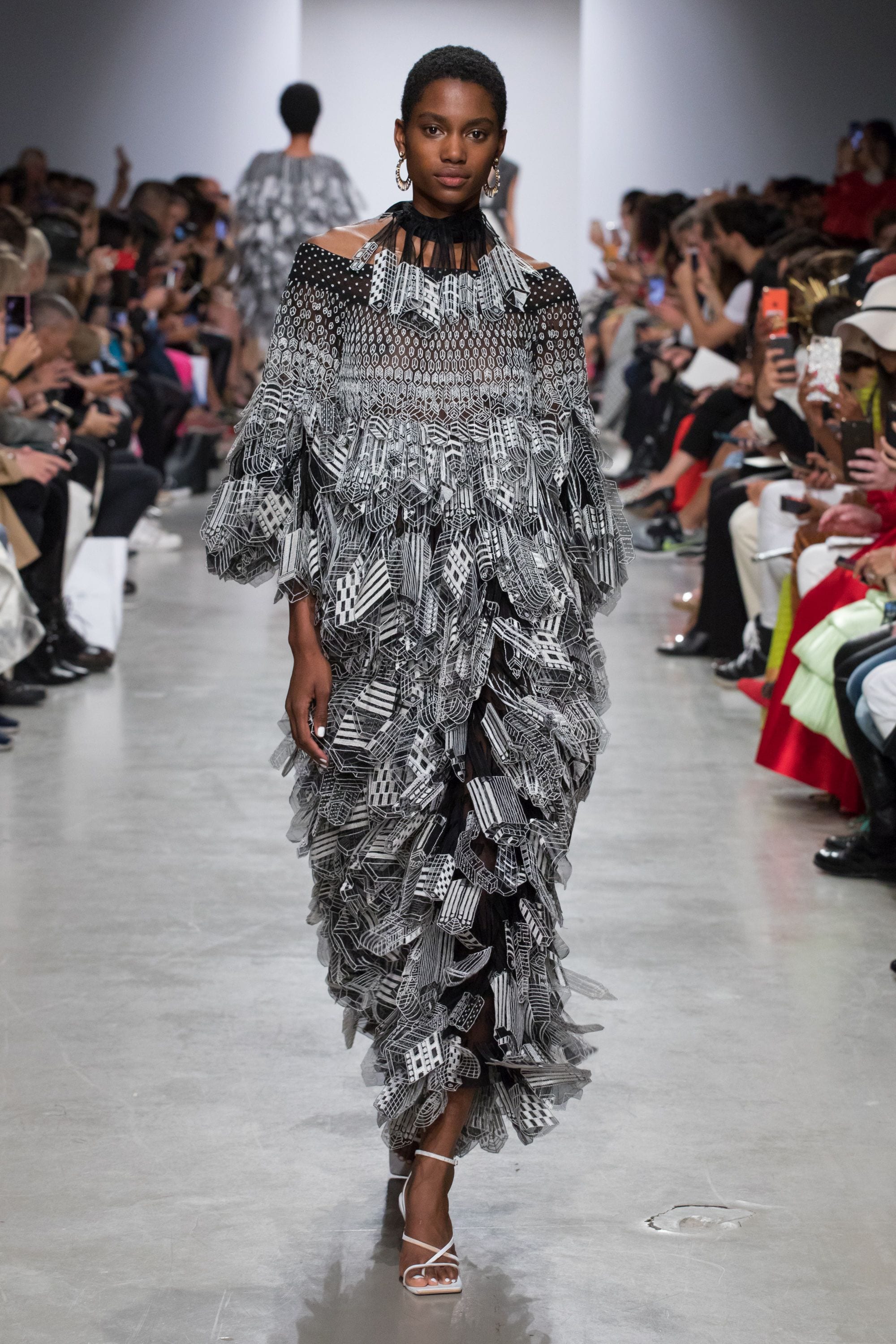 Unlike India, where couture is largely bridal, couture in Paris is often conceptual or artistic, with a huge emphasis on original ideas and handcrafting. The emphasis, Mishra says, is on tailoring and garments with interesting layers.

His minimal, faultlessly structured collection, luminescent as fern-like fronds of foliage, was in shades of off-white, yellow and other soothing shades. The leaves on the hems of the gowns appeared like teaming coral reefs in vivid shades of yellow and pink. He showcased dresses in long and voluminous shapes or as shifts, flecked by sequins and beads. They were teamed with long tailored coats with allover embroideries. Intricate, hand-cut appliquéd vines and birds unfolded across the dresses, the jackets and lehenga-inspired coats. The embroidery on the garments was almost fluid, seeming to originate from the fabric itself rather than lying flat on the surface. “Entire ecosystems have been crafted out of delicately hand-embroidered flora and fauna. We have pushed to discover new frontiers in our exploration of three-dimensional embroidery that lends a distinct shape-shifting essence to the silhouette,” he says.

In an ivory gown, two fronds enveloped the body in what seems to be a verdant Rousseau tableau. Over 6,000 hours of embroidery and intricate beadwork have gone into creating the stunning gown which, Mishra insists, is also imminently wearable. The designer teamed his delicate couture pieces with two fine jewellery brands — Mehta & Sons and Anjali Bhimrajka Fine Jewels. Mishra, who had announced the showcasing a while ago, said, “It is an opportunity of great creative freedom to be able to celebrate our definition of couture in liberation from the concept of trends. I find joy in the blurring of boundaries between fashion, art and poetry.” A favourite of actors such as Priyanka Chopra and Frieda Pinto, the designer champions functional fashion crafted out of traditional Indian textiles. A proponent of ‘Made in India’ couture, his label features the finest of hand-woven, hand-embroidered and handcrafted garments. His focus has been to push ancestral craft techniques in new directions. Each of his couture pieces takes almost 3,000 to 4,000 hours to handcraft, creating meaningful employment for artisans and embroiders. “With pieces that have taken more than 5,000 human hours to make, the collection marks a big leap for us as we establish our codes. The last seasons have witnessed a growth of 50 percent in business with a drop of 10 percent in production numbers. We are reducing the quantity of clothes we produce while growing as a business that employs more than a thousand artisans from the Indian craft community. The slowness enables us to incorporate a natural human pace to the process of creation, the biggest luxury of the moment.” Mishra’s artisans live in their own homes, in their villages, among their communities, helping them to retain their relationship with their craft and the environment that has nurtured it over centuries. He believes fashion is among the polluting industries in the world and couture, which involves slower artisanal processes, is perfect for times like these. “My objective is to create jobs which help people in their villages; I take work to them rather than calling them to work for me. If villages are stronger you will have a stronger country, a stronger nation, and a stronger world. My entire philosophy revolves around that. The product will go through evolution — it will change, improve — but the philosophy is constant.”