The main objective of this run is to nudge people to unleash their strengths and push their boundaries. While professional run clubs aim at covering the longest distance possible in the shortest amount of time, for beginners it’s more about achieving small milestones.

In 2012, co-founders of Bombay Running Deepak Oberoi and Tushar Motwani decided to run 10 km for 10 days without taking speed into consideration and at the same time challenging their ability to not give up. The first 2-3 days were boisterous and pleasant until it was the sixth day and it was nothing less than dreadful. Upon being asked how was the feeling after the sixth day, Deepak says, “At one point we really wanted to give up because it’s not easy to get up in wee hours, drive for more than 20 km to reach NCPA, Nariman Point, run 10 km and then head back to work. But we always reminded ourselves why we started this and how badly we want this”.
Tushar says: “We started this on December 11, 2012 and finished it on December 20. After the sixth day, we didn’t have the courage and avoided eye contact so that we wouldn’t give up. On the tenth day, we celebrated with Biryani and beer since it was my birthday too.”
It's a challenge
The second season of 10x10 challenge took place in October 2017 where more than 300 runners completed this challenge all over India. I have been running 10X10 for three years now (the last one was in October 2019) and it only gets difficult every year. I loved each and every moment of this challenge because it seemed unreal and I had to pinch myself to realise that everything is possible once you make up your mind.
The main objective of this run is to nudge people to unleash their strengths and push their boundaries. While professional run clubs aim at covering the longest distance possible in the shortest amount of time, for beginners it’s more about achieving small milestones.
It is the first base training for beginners and season runners to prepare them for a half marathon.
I asked two runners who have completed their 10x10 challenge during these three years:
Rohan Kulkarni
, Senior Manager at Coca Cola, Gurgaon started his running journey in January 2017 and since then has participated in a few 10 km timed runs. He has been inspired by Bombay Running posts on Social Media which seemed completely different and out of the world. He always wondered how these people could run with so much grace and have so much fun at the same time. 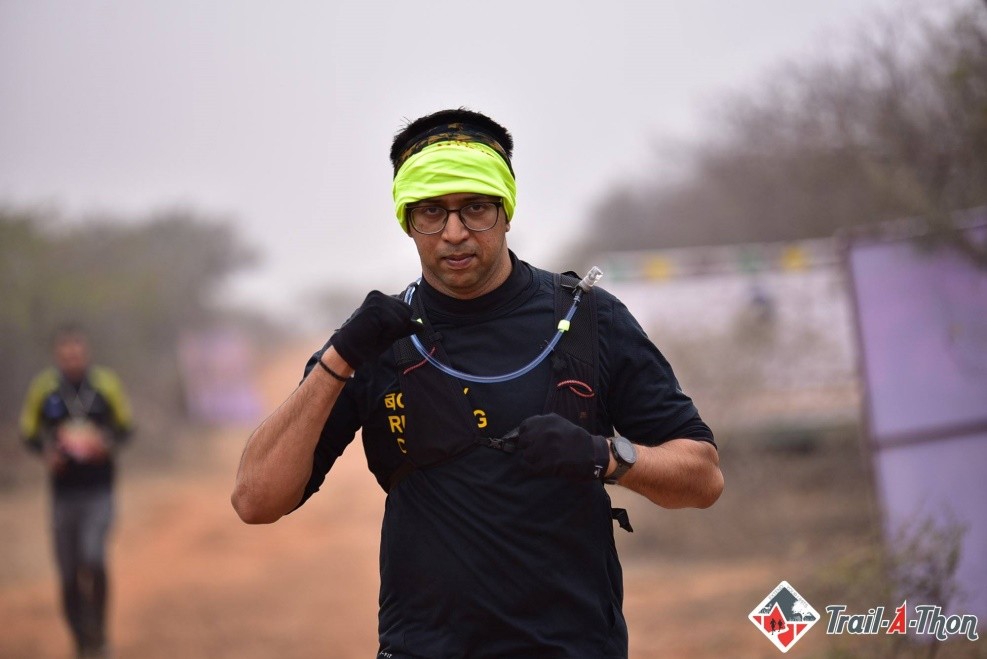 He says: “To see runners early morning on the roads was quite inspiring but not something I could imagine myself doing. To run with these groups required guts which I didn’t have, I could hardly run a few km at a stretch, it would be so embarrassing if I stop after 4 or 5 km. Most of my training runs were 5-6 km once or twice a week. There was no disciplined approach to training. Every time I set out for a 10 km run I wasn’t sure if I will finish the distance, in fact on most days I stopped at 7-8 km mark. Thinking of running 10 km for 10 days at a stretch seemed as unrealistic as possible. The best-case situation would have been to last halfway through and run for at least 5 days.”
Finally, he decided to take up the challenge.
Says Kulkarni: “Once I had made up my mind to take up the challenge there were two hurdles ahead:
Taking up the 10X10 challenge felt like ‘Now or Never’ to become a disciplined runner.
If I could do this then it would make sense to take up running seriously otherwise it seemed like a short term interest.”
Kulkarni’s life changed drastically as a runner and listed below are his accomplishments:
“It’s been three years since 10X10 but even when doing Ultras or Marathons when I struggle I think how I fought through those 10X10 days and the current challenge seems little. You get to know so much about yourself if you manage to run through the 10 days. It needs discipline, conviction, and mental strength but once you do it, it transforms the confidence in you,” says Kulkarni.
Jaai Pandit, is currently a PhD student at University of Toledo, the US. She completed her 10x10 challenge in 2018 with the crew in Mumbai. When asked about her thoughts before taking up this challenge, she said, “I was obviously very nervous about it.. Because running for 10 days that too 10 km each day is difficult. Also at the same time, I was juggling with my research work, my applications to study abroad, etc. But then I thought let's give it a chance. Also, Deepak Oberoi's motivation helped me and I signed up for the 10x10 challenge.”
She said the first 3 days were fine. “But then I could feel it I was constantly telling myself that I can do it. I can do it. But then at a point, the mind was also giving up. But then after the 6th day of the challenge, I could feel a different energy within me which led me to complete the challenge. I kept on telling myself – ‘Jaai, you are stronger than your excuses’. And that's what made me fight those negative thoughts and continue the challenge.”
What made her take up this challenge? “The reason behind this challenge was to train for half marathons. Before 10x10 I wasn't sure whether I could run any half marathons. Because I thought I wasn't fit enough for it. But I had to do the half marathons anyway because it was the only year I had in Mumbai because I was shifting to the US next year. So I decided to do it anyway. After the 10x10 challenge, I was able to do 6 half marathons back to back starting from November 2018-December 2018”.
What has changed after 10x10 for Pandit?
“Life after 10x10 challenge was different. Honestly running 10 km for 10 days continuously looks good to only to hear. But when you are actually doing the challenge that's when you realise what you have achieved. 10x10 helped me to get fit, it also helped me become strong headed because running is a physical exercise but you also require a lot of mental strength for it.
Now when I face other challenges in my professional life I always motivate myself by saying ‘Jaai, if you have completed 10x10 then you can achieve anything in your life’. I met some fabulous people in this 10x10 journey who have motivated me throughout...to keep running and not giving up. They supported me throughout my journey of 10x10 and hence they have become my close friends,” she adds.
Tanvi Kulkarni is a sales professional working with an insurance company and part of Bombay Running Crew.
Check out our in-depth Market Coverage, Business News & get real-time Stock Market Updates on CNBC-TV18. Also, Watch our channels CNBC-TV18, CNBC Awaaz and CNBC Bajar Live on-the-go!