Omega Speedmaster — the story of the moon watch

Updated : June 29, 2019 08:35 AM IST
Greenwich Mean Time does not mean anything to astronauts, they follow Ground Elapsed Time.
Like many iconic watches, the Speedmaster has also not changed much over time.

In less than a month from now, America — and the world — will mark the golden anniversary of the first Moon landing. On July 20, at the Smithsonian’s National Air and Space Museum in Washington, a countdown at 10:56pm will mark 50 years to the precise time Neil Armstrong set foot on the lunar surface.

Greenwich Mean Time does not mean anything to astronauts, they follow Ground Elapsed Time (the time from 00:00:00 at launch). In his memoir, Return to Earth, Buzz Aldrin, the second human on the moon, writes: “Few things are less necessary when walking around on the moon than knowing what time it is in Houston, Texas.” But since he was into watches Aldrin decided to strap the Omega Speedmaster “onto my right wrist around the outside of my bulky spacesuit.” (In case you are wondering about Armstrong’s Speedie on the Apollo 11 mission, he left his watch inside the lunar module as a back-up to an onboard timer.) That was how a legend was born, and deservedly so, and the Speedmaster, which has been part of six moon landings and every manned space flight undertaken by the USA since then, is as seminal a timepiece as, say, the Rolex Oyster or the Jaeger LeCoultre Reverso.

Like many iconic watches, the Speedmaster has also not changed much over time. Before it became the moon watch, though, it was a sports chronograph, and found favour with engineers and especially racing car drivers who loved the fixed bezel that showed the tachymetre scale. This innovation made it easier for them to read speed when at the wheel as opposed to other chronographs that displayed the tachymetre tracks on the dial. The Speedmaster’s association with space began long before John F Kennedy’s Apollo 11 mission. Five years earlier, in 1964, Nasa had put out word that it was looking for a watch – wrist-worn chronographs – it could bank on for space missions. Four watchmakers responded, among them were Longines, Hamilton, Rolex and Omega. The timepieces submitted by the watchmakers were put through punishing tests, and these included high and low temperature tests (from 93 degrees Centigrade to -18 degrees Centigrade) for extended periods of time; and shock tests, in which the watches were subjected to six shocks of 40 Gs, each of 11 milliseconds, in six different directions. The watches were also ‘accelerated’ linearly from 1G to 7.25Gs in 333 seconds; and also underwent an ‘oxygen atmosphere’ test, in which, according to Nasa, the watches would be “placed in an atmosphere of 100 percent oxygen at a pressure of 5.5 pound per square inch”. Nasa’s aerospace engineer James Ragan, who was in charge of the tests, later said, “Even I was surprised I could get any watches through those tests…It was the most extreme testing you could do to a piece of hardware.”

The only watch to emerge unscathed was the Speedmaster Professional, 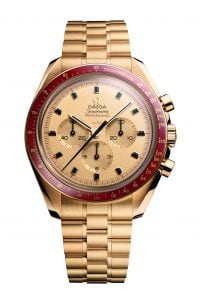 which was declared “Flight Qualified for All Manned Space Missions in March 1965.

This year, Omega has launched two timepieces to celebrate the golden anniversary of the Moon landing. The first is an 18K gold Speedmaster that is based on the watches presented by Omega to the Apollo 11 astronauts on their return to Earth. The watch is powered by the watchmaker’s Master Chronometer Calibre 3861, which, Omega says, is a descendant of the movement that went to the Moon. The other more recent release is a stainless steel edition, which features a laser-engraved image of Aldrin climbing down to the lunar surface on the the 9 o’clock subdial. The timepiece costs about Rs 6.6 lakh, and is limited to 6,969 watches.

The writer works on content strategy at Haymarket SAC