In late April this year, a video of a middle-aged Delhi woman went viral on social media. The video was recorded by a younger woman who was told she should be ‘raped’ for wearing a short dress. In the video, which got millions of views in a few hours before it was taken down by Instagram, the lady says, “Hello guys. These ladies want to wear short to short dresses to encourage all to see them. All these ladies wear short dresses or get naked to raped (sic)”.

Interestingly, while the younger woman – and her friends and passers-by who defended her – became overnight internet heroes for taking a stance against the moral policing of their clothes, the incident brought to light a devious undercurrent of misogyny in society that refuses to evolve.

Women, and what they wear, are still being held responsible for rape. Rape is still considered a suitable ‘punishment’ for women who step out of line. And making rape threats to strangers in public in full daylight is still okay.

Not only are rapists and men who threaten women with rape completely absolved of all responsibility for their criminal actions, the cruel irony is that such a problematic mindset is perpetuated not only by men, but women as well. 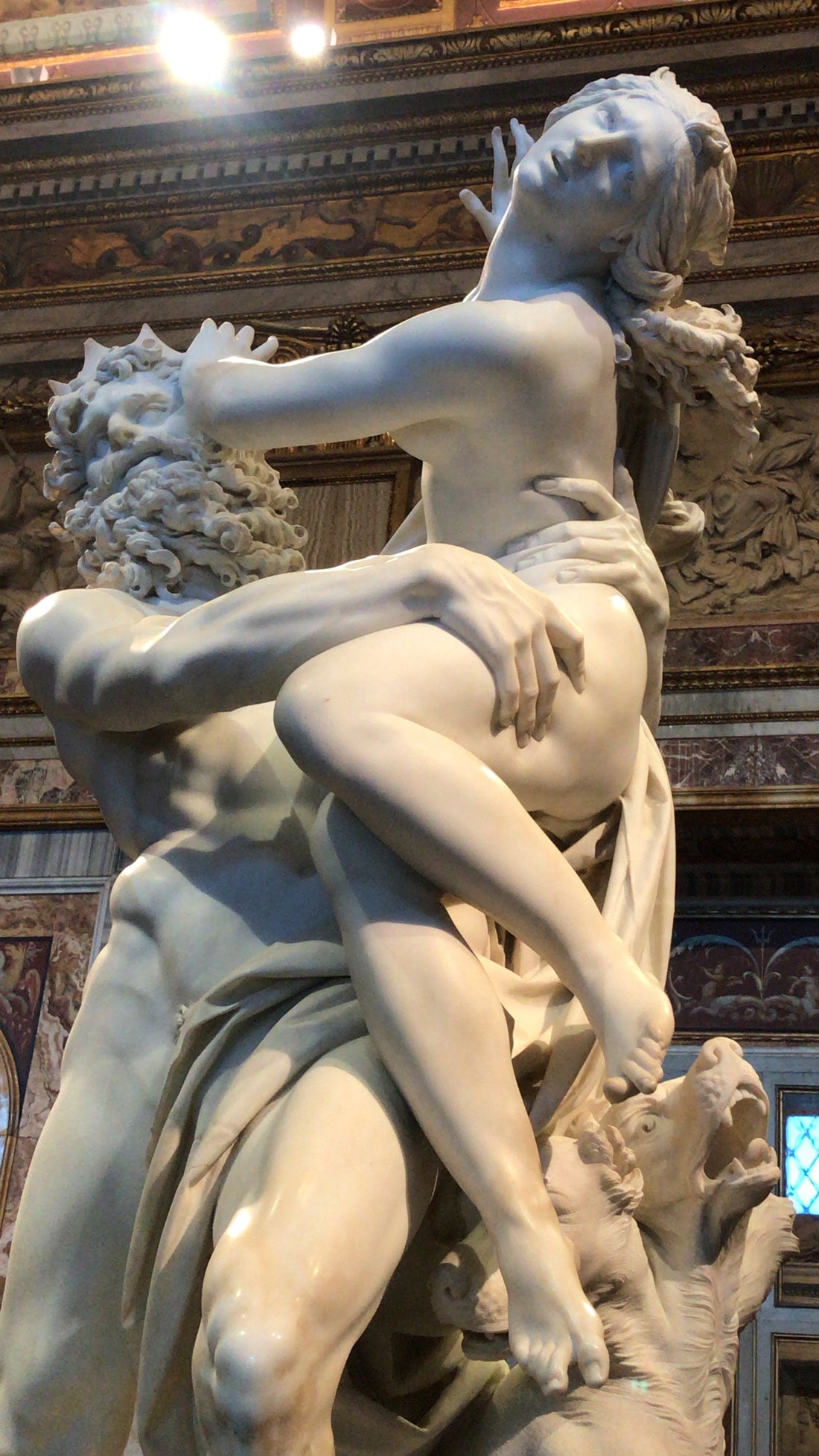 The Rape of Proserpina set in stone by Bernini (Photo: Ananya Jain)

From time immemorial, violence against women has been widely accepted, condoned and even in some cases legally sanctioned as a means of disciplining the ‘weaker’ sex, all across the world. In Roman and Greek mythology, the rape of Proserpina by the god of the underworld Hades was sanctioned by her father Zeus himself. If the gods did it and accepted it, it must be alright for mortals then, isn’t it?

Closer to home we have the infamous example from the sacred Mahabharata, the incident of the cheerharan, when Dusshasan disrobed Draupadi in a public forum after her own husband put her on stake in a game of dice and lost.

If mythology reflects life, then it is no surprise that Indian women have historically been treated as commodities, belonging to men and have always been subject to sexual humiliation, violence and rape at masculine whim. The disrobing or cheerharan of Draupadi

In times of warfare, it is women who are most brutally attacked, despite often being hapless non-participants. Argentinian writer Griselda Gambaro’s 1970s play Antigone Furiosa – an adaptation of the ancient Greek legend of Sophocles’ Antigone – highlights the female condition during the Dirty War in Argentina.

This phase was marked by immense political instability, multiple tyrannical military regimes, as well as human-rights violations. Civilians were killed and over 30,000 bodies completely vanished. In this time of crisis, women were the worst hit, molested, brutally raped and murdered, their young ones taken away from them. Even pregnant women weren’t spared.

In one scene, Garmbaro writes: “She falls to the ground, hitting her legs, rolling from one side to another in a rhythm that builds to a paroxysmic crescendo, as though she endures the suffering of battle in her own flesh.” Indeed, while all the people of Argentina suffered, it was women who endured ‘suffering of battle’ in their ‘own flesh’.

While these incidents provide a historic background into this entrenched inequality and history of sexual violence, it would be absurd to think that things like these are behind us. The newspapers are full of cases, day in and day out.

Whether it was the 276 schoolgirls kidnapped by the Boko Haram in Nigeria, the thousands who continue to exist only as ISIS sex slaves in the Middle East, or the civil violence in the Congo this June when hundreds of women were reported assaulted, rape continues to be a fact of life for women in conflict zones around the world.

In India, rape accounts for over 12 percent of all crimes against women. According to a 2016 report by the National Crime Records Bureau (NCRB), 38,947 cases of rape were filed solely where the victims were children. In 94.6 percent of these cases, the rapist was already known to the victim.

Despite the major agitation in 2012 and 2013, after the infamous Nirbhaya gang-rape of December 2012, circumstances haven’t changed and each case is more terrifying than the other; whether it is an eight-year-old girl being raped and murdered in an incident of religious hatred, or a class-five student gang-raped and subsequently burnt to death.

Kathua, Unnao, Surat, New Delhi, the list is unending. To think that these are only the reported incidents, with thousands others kept under wraps, unreported.

In the age of social media and internet, in fact, things have further worsened. Hiding behind screens, in the comfort of their anonymity, perpetrators have got further agency in making lewd remarks and leaving vulgar comments and messages for women.

Female journalists, politicians, celebrities and even common women who dare voice their opinions or display personal agency face such harassment and threats on an everyday basis all around the world on social media and blogging platforms.

It’s as if the internet has provided malefactors with a free pass to say anything and everything, with no repercussion whatsoever. In an absurd recent case, a Twitter handle by the name of @chowkidar_ramsanghi_ left an abusive comment for the daughter of renowned filmmaker Anurag Kashyap on her Instagram page.

Beginning his slur of vile abuses with a “Jai Shri Ram” (as if invoking a male god gave him legitimacy to voice his ugly thoughts), he threatened to rape her if she didn’t stop her father from speaking out against the government.

While Kashyap filed an FIR with the police and got the account blocked and taken down, most other such sick-minded individuals are able to get away scot-free. Technology cannot change mindsets: the war has moved from the battlefields to the phones but the female bystander remains the easiest victim.

The problem cannot be fixed unless the platforms themselves take a proactive and zero-tolerance stance against online sexual harassment and abuse. Erring accounts should not merely be disabled temporarily, but permanently taken down or banned.

The internet should be a safe space, representative of equality and opportunity, and not one filled with sexual predators, where women feel unsafe even looking at their screens.

Secondly, actions taken in the digital world must have real-life implications. A couple of years ago, a UAE-based company sacked an Indian expat who had attacked renowned journalist Rana Ayyub with offensive Islamophobic comments on Facebook messenger.

The man’s visa was cancelled after she put a screenshot of his comments online, and he was deported. We need more companies and stakeholders such as these. Perpetrators must realise that online threats do have offline repercussions.

Finally, mindsets have to change. After centuries of oppression, women should not be worried about being ‘too loud’ or ‘too much of a feminist’. Sexual education, cyber etiquette and digital safety should be a priority in educational institutions, workplaces, organisations, and government bodies.

In 2016, the sports-community group Just Not Sports became the talk of discussions across social media with its viral #MoreThatMean video, which was a simple yet extremely moving attack on misogynist culture, specifically in sports. Ordinary men were made to read out aloud the misogynist comments left on the social media pages of renowned ESPN sports reporters Sarah Spain and Julie Dicaro, face to face. The recorded comments reeked of sexism and violence, and the men reading them repeatedly apologised, even though they hadn’t made any of them personally.

After the video went viral and won multiple awards, Brad Burke from the Just Not Sports group said, “#MoreThanMean wasn’t the solution, it was a signal to think differently about the problem. Teachers used the video in class. High school coaches showed it to men’s teams. And scores of male sports fans told us they stopped scrolling past abuse, and started reporting it. It’s not the end. But it’s a step forward.”

Things change only when we take action. It is time.

Ananya Jain is a student of history and literature at University of St Andrews, Scotland.