Natural history notes from nature’s frontlines in India, for 2019

Updated : December 31, 2019 08:01 PM IST
Amidst discussions on elections and extreme weather events which dominated 2019, we brought to you little whiffs of fresh air with our stories on the wonderful creatures that we share our country with.
India’s unique geography and evolutionary history have wrought biogeographical relationships between India and her neighbours.
Before we move into 2020, here’s a roundup of the most interesting natural history notes we featured this year.

The 500 plus stories we carried in 2019 had two overarching themes – the national elections and the string of extreme weather events that left India reeling. Amidst discussions of people’s issues and electoral promises, like little whiffs of fresh air came our stories that brought before the public wonderful creatures with whom we share our country.

Knowing about these species, their unique behaviours and habitats will motivate all of us, we hope, to do what we can to conserve India’s biodiversity. Our stories go beyond the popular tigers and rhinos and talk of lesser known and perhaps more interesting creatures that make their home alongside us.

India’s unique geography and evolutionary history have wrought biogeographical relationships between India and her neighbours. The Western Ghats has more in common with neighbouring Sri Lanka than the rather remote Himalayas, as this story on lizard evolution demonstrates. The Eastern hog deer, a denizen of the Southeast Asia, was found in Manipur at the Keibul Lamjao National Park. The deer in this area was earlier assumed to be the Western hog deer.

Before we move into 2020, here’s a roundup of the most interesting natural history notes we featured this year.

The swimming camels of Kachchh

The camel is the ship of the desert, but do they swim? Azera Parveen Rahman writes about the Kharai camels of Kachchh, which are dependent on mangroves for food. During monsoons, herds of these camels swim to mangrove islands and stay there for days. This spectacular event is under threat from rapid industrialisation and mangrove destruction. The National Green Tribunal made a decision in September to protect Kachchh’s mangroves, an important step in conserving the unique ecosystem. Kharai camels, also known as the swimming camels, are only found in Gujarat in India. Photo courtesy Sahjeevan.

The Gharials of Gandak

The population of gharials (Gavialis gangeticus), a crocodilian endemic to the Indian subcontinent, has gone up in the Gandak river in Bihar, reports Gurvinder Singh. A successful captive breeding programme brought up numbers from 15 in 2010 to more than 200 in 2017-2018. 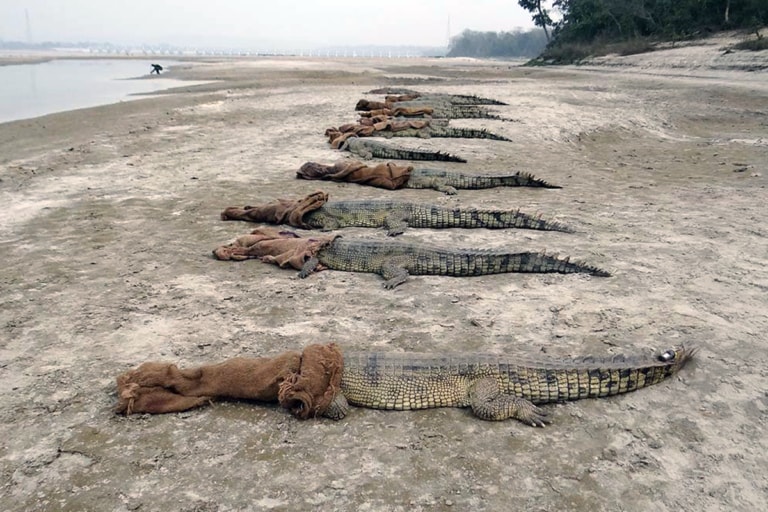 The grizzled giant squirrel is endemic to some parts of southern India and Sri Lanka. A survey in Chinnar wildlife sanctuary has revealed that the population of grizzled giant squirrel has fallen by 78-85 percent, writes Manupriya. The species is listed as a “near threatened” species in IUCN Red List and faces threat from habitat loss and predators. An SOS call for the ‘Tiger of Kaveri’

The orange-finned mahseer or hump-backed mahseer, believed to be endemic to the Kaveri river that flows through the states of Karnataka and Tamil Nadu, has been an enigma for anglers all over the world and a source of much debate among ichthyologists and environmentalists. The IUCN has red-listed the hump-backed mahseer, as critically endangered following a taxonomic evaluation and a scientific name, Tor remadevii. This has sparked differences of opinion among experts, writes Arathi Menon. Fish at Vahnipushkarani in Ramnathapura where mahseers congregate for food from pilgrims. Photo by Abhishek N. Chinnappa.

The Indian muntjac or barking deer, one of the most primitive deer groups in the world, is found in forests across most parts of India. The species is fascinating to scientists because of its abnormally low chromosome number, writes Bhanu Sridharan. Females have six and males have seven, the least among mammals. A muntjac or barking deer waits a while before disappearing into the foliage. Photo by Varun Warrier.

The four extant species of horseshoe crabs in the world are imperilled because of overfishing for use as food, bait, production of biomedical products derived from their blood, habitat loss or alteration due to shoreline development. In India, where two species of horseshoe crabs are found, bycatch in the fishery sector and habitat loss are some of the most pressing challenges. When Cyclone Gaja hit Tamil Nadu, it caused widespread destruction, but most of the palmyrah trees were unaffected and stood firm, writes Jency Samuel. Palmyrah is the state tree of Tamil Nadu and has ecological and economic value, aids biodiversity conservation and is climate resilient. 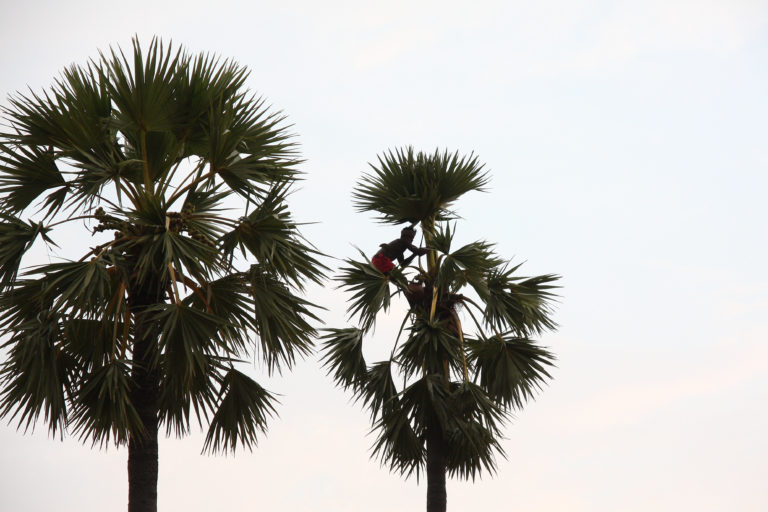 The Himalayan wolf is a distinct species of wolf and shows unique genetic adaptations to difficult conditions in the Asian high altitude ecosystems, a study has found. Mayank Aggarwal reports on the study that recommends conservation of the keystone predator for the welfare of the Himalayan ecosystem. A recent study has documented elaborate behaviour during pollination in the seagrass, Enhalus acoroides. In India, seagrasses abound in the southeast coast close to Gulf of Mannar, and on both archipelagos, Andaman and Nicobar Islands and Lakshadweep. Female flower of the tape seagrass. Photo by Vardhan Patankar.

The list won’t be complete without including our multiple stories on pangolin poaching: an interview with wildlife crime detective Samuel Wasser, how pangolin poaching to China is thriving as rhino poaching declines in Assam (by Anup Sharma), the illegal trade routes for trafficking (by Sahana Ghosh) and the status of the Indian pangolin in the Eastern Ghats.