Updated : October 22, 2019 04:09 PM IST
Several thousands of women and children scour mica for a pittance in illegal and abandoned mines in Jharkhand to add sparkle to the global cosmetics industry
llegal mica mining not only causes serious health hazards among the women and child workers but also leads to massive deforestation and loss of wildlife

Broken nails are possibly the least of all the horrors of mica scavenging in and around abandoned mines in the eastern Indian province of Jharkhand. Exploitative child labour, death by suffocation in mining shafts, severe health hazards such as tuberculosis for the impoverished workers who have nothing else to turn to for a living are issues that need more immediate attention.

But for Seeta Devi, who scrapes mica from the ground with her bare hands in an abandoned mine at Domchanch administrative block in Koderma district, daily injuries to her working hands are a clear and present danger. She says she coughed blood a few months ago but has no alternative other than returning to scavenging every day.

“We do not have any other alternative livelihood. We have to scrape for mica despite the risk. I feel breathless sometimes and even vomit blood,” says the 40-year-old woman, shying away from her photo being snapped because she fears being punished for working illegally. “But what options do I have? The dug up pits not only give us a livelihood but will also serve our graves.” 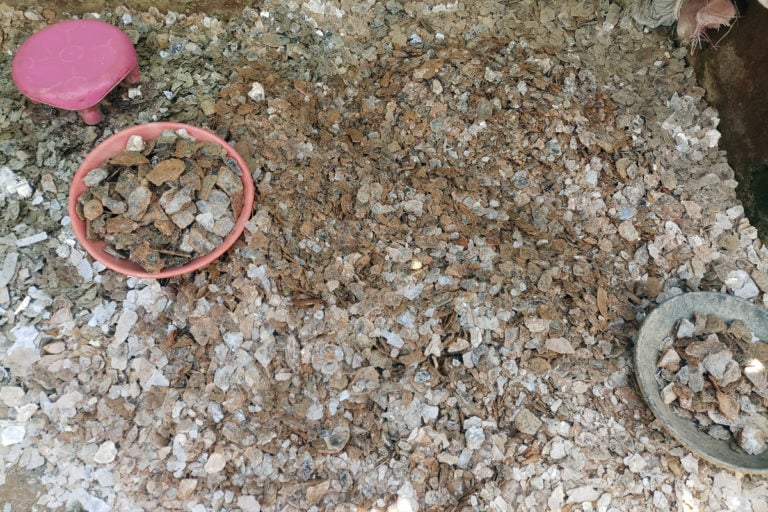 Mica is used in cosmetic products, paints and electronics. Photo by Gurvinder Singh

For all her troubles, Seeta Devi manages to earn meagre Rs 100-150 if she manages to scrape around 20 kilograms of mica and if she manages to find a buyer. She is but one among several thousands of poor women and children who are involved in illegally collecting mica from abandoned mines in Jharkhand.

The shiny mineral, much sought after around the world to add shimmer to eyeshadow, nail polish and lipstick, comes at a tremendous human cost. Besides cosmetics, mica is also used as an insulator in electronic chips and is found in lasers, radars and paint used in cars.

Koderma, some 170 kilometres from state capital Ranchi, is a hub for sourcing mica in the underdeveloped state of Jharkhand. Many thousands are involved in the mining as they see it as a viable livelihood in a state where 45 percent of the population lives in abject poverty, shows the Reserve Bank of India data.

India has large reserves of mica, mostly found under forests in central and eastern parts of the country. The South Asian nation was once one of the largest producers of mica, with over 700 mines and 20,000 workers employed in the sector. However, India enacted a forest law in 1980 to limit deforestation. At around the same time, some substitutes were found for natural mica. The combination of factors shuttered the mines.

Underground mining was legal in Jharkhand before the Forest Conservation Act came into effect in 1980. Mining companies began to wind-up as the government stopped issuing fresh leases. By 2000, mica mining ground to a complete halt. And that is when the illegal scavenging started.

“The abandoned mines were illegally taken up by local contractors, who began to dig pits to find mica and employed children and women not only because of cheap labour but their supple hands were perfect for the job,” says Indrajeet Samanta, an environmentalist whose family once owned a mica mine in Koderma. “The work is hazardous because children go deep inside the caves where there is little oxygen, which often puts their lives at risk. As the job is illegal, accidents are not compensated.” Illegal mica mining still continues in Jharkhand and employs several women and children to scavenge for the mineral. Photo by Gurvinder Singh.
Rampant child labour As many as 5,000 children between the ages of six and 14 have dropped out of school in three mica mining districts of Jharkhand and adjoining state of Bihar to work as scavengers, according to a recent survey by India’s National Commission for Protection of Child Rights (NCPCR).

NCPCR reported that 4,545 children from Jharkhand’s Koderma and neighbouring Giridih district are not attending schools. Similarly, 649 children have been reported to have abandoned schools in Nawada district of Bihar. This came after international child rights organisation Terre Des Hommes reported in 2018 that there were more than 22,000 children employed as labourers in the mica sector.

The scavenging of mica is an extremely hazardous occupation. For instance, the Koderma district hospital has to contend with a high incidence of tuberculosis patients. “We get around 40-50 fresh cases every month of TB and 15-20 regular patients,” says Prakash Kumar, lab supervisor, Sadar Hospital, Koderma. “The numbers could be more, but most of the patients do not come for treatment, thinking that it might affect their work. Others come too late when they become multi-drug resistant and there is nothing much left to be done.” The mining also leads to further deforestation as large stretches of forests in the area are illegally cleared. “Illegal mining serves the dual purpose by extracting mica and providing timber. Trees are cleared routinely to bring new land under mica mining,” says Samanta. “But everybody is quiet and hardly any action is taken about it.”

Koderma boasts of a forest area of 820 square kilometres and officials claim that action is being taken to curb illegal activities. “A district mining task force has been formed to stop illegal mica mining,” says Suraj Kumar Singh, Divisional Forest Officer, Koderma. “We conduct routine raids and nab those involved in nefarious activities. We seized 50 vehicles carrying mica a few months ago. We also try to reclaim mining areas and bring it under the forest.” Singh, however, concedes that a shortage of staff comes in the way of curbing the illegal mica trade.

Local residents say mining has destroyed wildlife. “Earlier, elephants and wild boars often trespassed into our villages. Some species of rare birds were also spotted but nowadays they are hardly seen,” says Shivshankar Ray, a resident of Bangakhlar village in Koderma. “Mining has ruined everything.” India’s large reserves of mica are mostly found under forests in central and eastern parts of the country. Illegal mica mining also leads to massive deforestation and loss of wildlife. Photo by Gurvinder Singh.

As the horrors of illegal mica mining grab global attention, there is pressure against cosmetic and other companies who procure mica from Jharkhand. Established in January 2017, the Paris-based Responsible Mica Initiative (RMI) is now trying to safeguard the environment and eliminate unacceptable working conditions, along with eradication of child labour by 2022 in mica mining in Jharkhand.

RMI had 55 members, mainly from cosmetics and paint industries, and representing the entire supply chain from mica processors in India to end-product manufacturers and brands. In 2018, it raised euro 815,625 as membership fees, which would be mostly utilized for bettering the lives of Jharkhand’s mica workers.

“We aim to increase livelihood schemes, access to quality education, improved health and nutrition and access to governmental schemes,” Fanny Fremont, executive director of RMI, said over email. “We are also working with the Jharkhand government, pushing and supporting for formalization of a sustainable mica industry, which includes respect to all environmental topics.”

Dreams of a better life

Amidst the rubble and dust of mica mining, the children have not stopped dreaming of a better life. Deepika Kumari, who was a mica mine labourer till a few years ago, now goes to school because of an initiative of Kailash Satyarthi Children Foundation (KSCF), which takes care of her education. Satyarthi received the Nobel Peace Prize in 2014 for his work on children’s rights.

The scars of mining remain with Deepika Kumari. She is anaemic and suffers from chronic skin problems. Constant exposure to dust has ruined her health. But all this doesn’t deter to gutsy 15-year-old. “I want to become a police officer and punish those who employ children in hazardous work,” she vows.

The teenager is a member of a bal panchayat (children’s council), a village-level body comprising 11 children who create awareness against sending children for mining and stopping child marriages, among other social issues. An initiative of KSCF, there are 171 such councils in 150 villages of Jharkhand.

“We constantly try to rescue children from mining and send them to schools for their better life,” says Govind Khanal, a KSCF activist. “We regularly distribute saplings and ask children to plant them with an aim to create awareness on the environment.”

Indramani Sahu, the founder of Samarpan, a non-profit working for women’s empowerment and child rights, claims to have connected over 700 families to the mainstream by offering alternative livelihoods. “Mica mining not only causes health hazards but is also destroying the environment,” says Sahu. “We are trying to connect them to various government schemes and providing them with financial support so that they can do farming or livestock rearing for their livelihood and reduce their dependency on the forest.”

It is encouraging that there are now efforts to wean women and children away from the hazards of mica scavenging in Jharkhand, but given the widespread poverty of the people in Koderma and neighbouring areas, there is a lot that remains to be done.
Tags child labour Environment health hazard Jharkhand Mica scavenging