Updated : July 12, 2019 09:46 AM IST
Like many Indian immigrants, Suketu Mehta’s father and grandfather crossed the oceans, struggled and settled in countries far from their homeland.
‘Maximum City: Bombay Lost and Found,’ the wonderful first book of Suketu Mehta had won a plethora of awards and was a finalist for the Pulitzer Prize.

At a time when refugees, asylum-seekers, migrants and illegal immigrants are regarded as trouble-makers, scum, inconvenient and expendable in America and immigration is itself the new four-letter word, there comes a powerful protest from award-winning author Suketu Mehta, himself the son of immigrants.

Like many Indian immigrants, Suketu Mehta’s father and grandfather crossed the oceans, struggled and settled in countries far from their homeland. In his stunning new book, ‘This Land is Our Land – An Immigrant’s Manifesto’, Mehta recounts how in the 1980s his maternal grandfather in London was accosted by an elderly British man who lashed out: “Why are you here? Why are you in my country?” 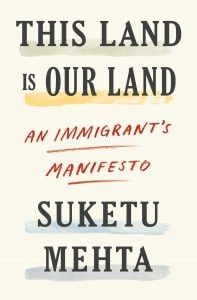 ‘“Because we are the creditors,” calmly responded his grandfather, who was born in India, worked all his life in colonial Kenya and was now retired in London. “You took all our wealth, our diamonds. Now we have come to collect.”

As Suketu Mehta writes, “We are here, my grandfather was saying because you were there.”

It is indeed almost a karmic tale of epic proportions, the end result of hundreds of years of colonial exploitation and abuse by the Masters which stripped the home countries of wealth and jobs - and now the exploited are once again on their doorstep, looking for justice, for retribution. As Mehta writes, “This book is being written in sorrow and rage - as well as hope. I am angry: about the staggering global hypocrisy of the rich nations, having robbed the poor ones of their future, now arguing against a reverse movement of peoples – not to invade and conquer and steal, but to work.”

Recently American audiences got a chance to meet Suketu Mehta face to face at the New York Public Library for a no-holds-barred discussion with artist and writer Molly Crabapple. It was a packed auditorium and right in the front row were his immigrant parents, Ramesh and Usha Mehta, to whom he has dedicated this book, as well as his son. Three generations of the Mehtas from Gujarat in America.

‘Maximum City: Bombay Lost and Found,’ the wonderful first book of Suketu Mehta had won a plethora of awards and was a finalist for the Pulitzer Prize. Mehta, who is a professor of journalism at New York University, has for the last decade been writing a book about New York, a deep delve into another Maximum City. However, with the recent chaos about borders and walls in a surreal new world – he turned his passion and evocative prose instead to the difficult realm of immigration, a cause denigrated by the powers that be in many affluent Western nations, especially Trump’s America. However, as Mehta points out, migration is a constant of human history – in fact, between 1960 and 2017 the overall number of migrants tripled: “If all the migrants were a nation by themselves, we would constitute the fourth-largest country in the world, equal to the size of Indonesia,” he writes. “By mid-century, migration will account for 72 percent of the population growth in the USA; and up to 78 percent in Australia and the UK. This is changing elections, culture, cities, everything. Mass migration is the defining human phenomenon of the 21st century.”

“The rich countries have always claimed the freedom to move around the planet, not just to sightsee or seek employment, but to invade, conquer,” he writes. “At airports around the world, the holders of Indian and African passports line up miserable in hours-long lines while their fellow passengers holding American and European passports, gilded passports, swan through immigration.”

Even the terms differ for the rich and poor: brown people, often working in menial or service jobs are called ‘migrants’ while white people, often working as executives or professionals get the exalted title of ‘expats’.  Worth reading is his description of today’s migrants, many of whom are women and who are given a horrendous treatment, especially if they are poor and in lowly jobs. It is a brutal world out there.

Indeed, Mehta’s book is must-reading both for the skeptics and the believers – for he tells you why the migrants are coming and why they are feared and why they must be welcomed to safeguard the future of the world in the long term.

As he points out, New York City demonstrates that immigration works, that people can live together in peace and harmony. Mayor Bloomberg went to Capitol Hill and testified that after 911 if it had not been for immigration, both legal and illegal, the economy of the city would have collapsed.

To those who write-off immigrants, he says: “Migrants are the creators of some of the biggest and most liquid capital flows anywhere. They send back some $600 billion in remittances every year, which amounts to three times more than the direct gains from abolishing all trade barriers, four times more than all the foreign aid and 100 times the amount of all debt relief.”

In fact, he says that between 2015 and 2030, remittances sent to the developing countries are projected to be over $6.5 trillion. For those who think that migrants are a drain on the social services and the host country, Mehta point out that total migrant earnings are estimated at $3 trillion annually, of which 85 percent stays in the host countries, with the money sent home averaging out to less than 1 percent of the host countries’ GDP.

In fact, migrants are 3 percent of the world’s population but contribute 9 percent of its GDP. Mehta has a piece of advice for the powers that be, the ones that rule the borders: “To avoid paying the migration tax, and not to be swamped by migrants from the countries they’ve ruined, the rich countries should, for their own good, be nicer to other countries.”

What action can immigrants take? Mehta gave the example of his Bengali-American brother-in-law Jay Chaudhury who is now the Democratic whip in the North Carolina Senate. He personally knocked on 10,000 doors and won over an American community to become the first Indian American senator in North Carolina history. He ran with a focus on good public school education and won by a landslide. As Suketu Mehta explained, “All politics is local, all politics is personal. So this is how we claim this land. We fight for our rights, and we run for office. And we say loudly, proudly, this land is ours.”