Updated : June 07, 2019 02:16 PM IST
For the Dasari family, spelling bees have been a great unifier and have brought the family closer.
SpellPundit’s e-learning technology allows saving information of the most commonly misspelled words for later review.

Unless you’re living on another planet, you are bound to have heard about the big success of the Indian-American children in the Scripps National Spelling Bee -- the news of which has been blanketing all the news media. For the past decade or so, children of Indian origin have had a very strong showing in the spelling bees, and books have been written and films made about this recurring phenomenon -- but this year these students outdid themselves: they practically claimed victory over the English language. Hard to believe but they actually defeated the dictionary which ran out of difficult words to test them on and the organisers had to crown not one but eight champions!

The eight co-champions are Erin Howard, Rishik Gandhasri, Abhijay Kodali, Shruthika Padhy, Rohan Raja, Saketh Sundar, Sohum Sukhatankar, and Christopher Serrao, winning with such tongue-twisters as  erysipelas, aiguillette and cernuous. They became the first group to actually share the championship in the 92 years of the Scripp National Spelling Bee. “This is a night to celebrate the remarkable academic achievement of a group of the world’s most talented spellers,” said Paige Kimble, executive director of the Scripps National Spelling Bee. “These spellers have conquered the dictionary unequivocally with their ability, skill and command of the English language.”

Adam Symson, president and CEO of the EW Scripps Company (NASDAQ: SSP) noted: “Once again, the Bee was a thrilling competition that showcased the young spellers’ vast knowledge of vocabulary alongside their poise and composure.” Each champion got the full amount of $50,000 and a personal trophy.

It is noteworthy that seven of the eight winners were of Indian origin. So how did these teens pull off such a coup of the English language? It was certainly due to their own grit and hard work, their discipline and work habits and the commitment of their families, but there may have been a secret sauce too called SpellPundit – a coaching company which six of the eight champions and actually thousands more had used, who all made it to the finals. The Dasari Family -- Ganesh and Usha with their children Shobha and Shourav -- the people behind SpellPundit. Photo: SpellPundit.

So if you think SpellPundit is some slick kind of artificial intelligence gizmo, think again – it is actually an e-learning system created by an old-fashioned ‘desi’ family unit -- parents and two children -- who have mastered the many nooks and crannies of the spelling bee challenge. It is a start-up in the literal sense, a home-grown enterprise started by two teens who participated in various Spelling Bee contests themselves – Shobha Dasari and her younger brother Shourav, who finished fourth in 2017 and won many of the bees he competed in.

As Time magazine wrote: “For an annual subscription price of $600, SpellPundit provides a curated list of more than 100,000 words and online study tools, and the Dasaris offer a money-back guarantee that any word used in this year’s bee will be included in their guides.”

Based in Houston, TX, it is very much a family business and the siblings are assisted by their parents, Usha and Ganesh Dasari. The business already has over 2000 students on its roster even though the founders are so young: Shobha is 18 and headed to Stanford in the fall where she plans to study bio-engineering. Shourav is in the eleventh grade in high school and devotes several hours to SpellPundit a week. He says most of their clients are from around the US, though they also have some from Jamaica and China. 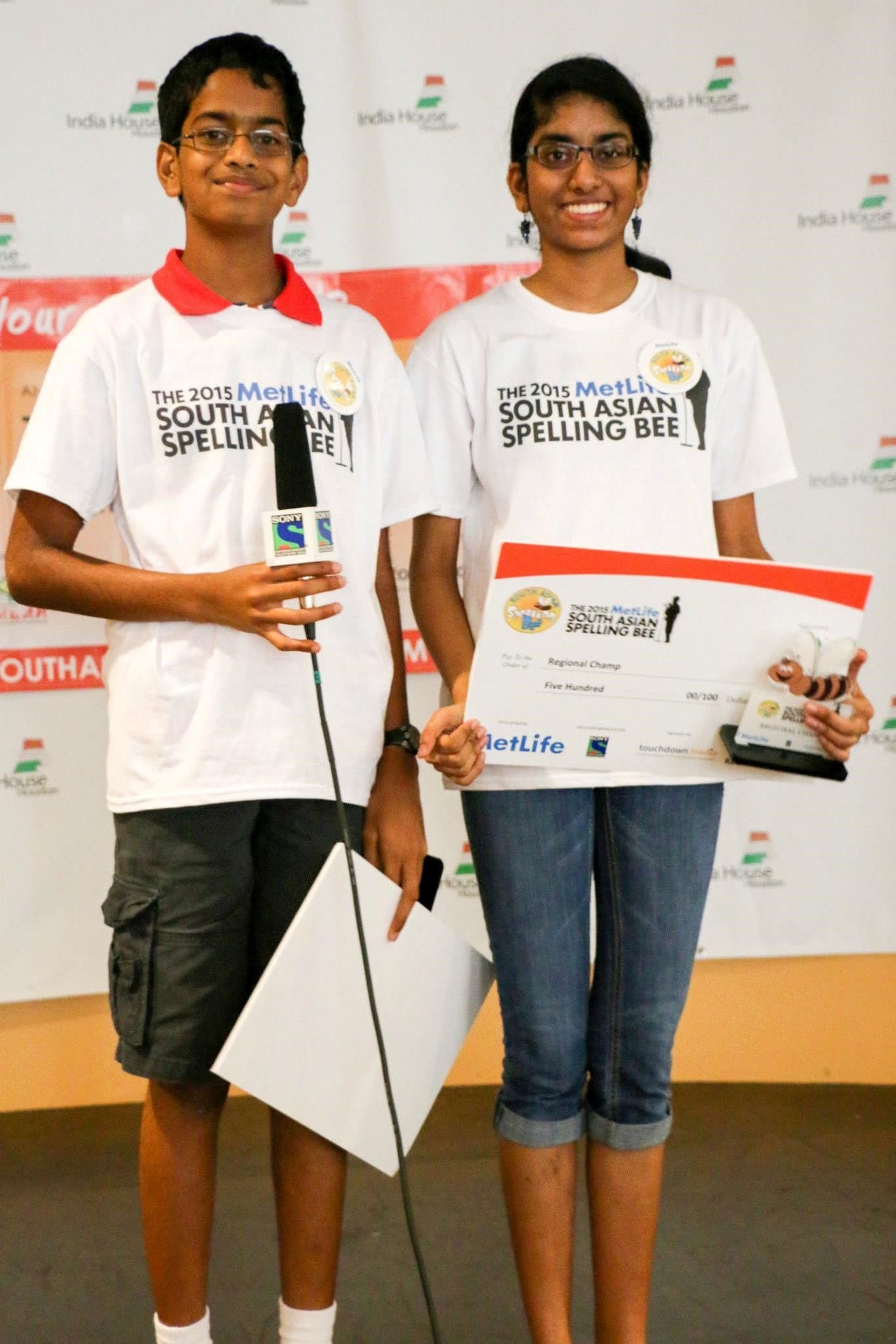 As Shobha explains, she and her brother both competed for 7 years in spelling bees, both national and south Asian ones, and during that period they had compiled an enormous amount of material and comprehensive word lists which they thought they would use for the benefit of the spelling community after they left competing: “We thought we would give that back to the spelling community so that all the future spellers could spend more time learning the words and less time looking for them.”

The online unabridged Merriam-Webster dictionary has about 475,000 words, and SpellPundit has identified the most important words and arranged them in a number of modules that are convenient to prepare. Each word in the modules has all the information such as the part of speech, language of origin, pronunciation, definition, and even a hint to remember a word. The words are further arranged systematically which allows identification of the modules that are required for each level of competition -- School, District/County, Regional, State, and National Spelling Bee.

As Usha points out, traditionally spelling and vocabulary are learned by studying a list of words and being quizzed on them. She says: “Though this method works, it is slow, inefficient and time consuming. The SpellPundit’s e-learning technology allows saving information of the most commonly misspelled spelling/vocabulary words for later review. The spellers first learn the words using the Learning Module and take tests on the words using the Testing Module.”

For the Dasari family, spelling bees have been a great unifier and have brought the family closer. Shobha says it bonded her with her brother as they worked together in various bees. Once they started SpellPundit, the siblings took on recording audio pronunciations of words and interactions with clients, offering support to the spellers while their parents handled the marketing, website and social media.

The saga began when the family migrated from Andhra Pradesh to America. Both Ganesh and Usha had earned STEM degrees in India. Ganesh is a scientist and works with Exxon Mobil, while Usha has a masters in engineering and has worked extensively in software engineering. The Spelling bee became a strong passion for the family so she took a break from work and now SpellPundit has become a full time activity for her, and it is her background experience which helps create the technical prowess of SpellPundit which is a learning method suited to the changing times.

“We started SpellPundit to give back to the spelling community – that was our main goal,” says Usha. “We also donate part of our revenues to the North South Foundation, a non-profit organisation which conducts spelling bees, and also supports poor children in India achieve higher education. So we are giving back to the spelling community and underprivileged children, and that is the most rewarding part.”

The triumph of the young Indian-American students at the Scripps National Spelling Bee and the innovations created by SpellPundit all go to show that immigrants are indeed America’s strongest and richest asset and may be the way the country spells success and prosperity.