Shinji Fukuyo, the fourth master blender at the 120-year-old Japanese distiller Suntory, is responsible for every bottle of whisky that is released by Suntory’s three distilleries in Japan. Fukuyo talks to CNBCTV18.com about the crisis of supply and demand faced by Japanese distilleries, his daily routine, and visiting 'thekhas' in India.

In 2009, Shinji Fukuyo became only the fourth master blender at the 120-year-old Japanese distiller Suntory. That means he is responsible for every bottle of whisky that is released by Suntory’s three distilleries in Japan. These include some of the most popular Japanese brands such as Yamazaki, Hibiki and Hakushu. Fukuyo joined Suntory in 1984 and worked first at Hakushu before moving to Yamazaki as a blender. He spent time in Scotland between 1996 and 2002, conducting whisky-related research at Heriot-Watt University in Edinburgh, and working at Morrison Bowmore Distillery in Glasgow. The whisky industry legend was recently in India for the launch of Beam Suntory’s Indian whisky Oaksmith as well as whiskies from The House of Suntory portfolio, including Yamazaki and Roku gin. The Japanese company acquired American distiller Jim Beam in 2014 and its stable of spirits includes, apart from the abovementioned brands, Maker’s Mark, Laphroaig, and Bowmore. Fukuyo talks to CNBCTV18.com about the crisis of supply and demand faced by Japanese distilleries, on applying Japanese blending artistry to a Bourbon whisky, and visiting thekhas in India.

Japanese whisky is increasingly in short supply. What kind of steps is Suntory, as one of the big producers, taking to remedy it?
In Japan, we are still focusing on ensuring the highest quality blends are made and not on increasing production volumes to make larger amounts. Hence, the focus has been to make smaller amounts of the highest quality whisky possible. In the last 10 years, we finally got the recognition we deserved, but we continued challenging ourselves to increase the quality of our whisky. While our main target was the domestic market in Japan, our quality and purity helped us in getting recognised globally. Our distilleries in Japan are distilling spirits at their maximum capacity and we are steadily growing the same. We have also made investments in our warehouse capacities to meet future demands of production. It’s about balancing supply and demand as we try our best to create and mature more whisky, but it will take time. We can just do our best.
Despite working and living in Scotland for a long time, you have always said that Japanese whisky is different and should not be called Scotch. What is the essential difference?
While Japanese whisky finds its origins in Scotland, it is quite different from whiskies from other parts of the world. Today, in spite of having a similar production process, the taste, blend and quality are completely different. Of late, Scotch makers are focusing on scaling up production of the best-tasting whiskies and developing streamlined production units for the same while Japanese people are still more detailed focused, and very careful. We are where Scotland was several years ago. Hence, while we have the same process, the purpose is different.
You recently worked on Legent Bourbon with Fred Noe (master distiller at Jim Beam and grandson of whiskey producer Jim Beam). How was it working on something so fundamentally different, and what were your learnings from it?
Legent brings together the best of the east and west, melding Kentucky distilling tradition with Japanese blending excellence. While Fred Noe and I have known each other for years, I finally got a chance to work with a legend like him and also got exposure to his tremendous expertise. Since 2014 we were aiming to integrate the legacy of both Beam and Suntory. This is how the Legent idea emerged. We collaborated to create this new product which also gave me immense learning about Bourbon whisky, as I did not really know much about it earlier. While our accents might be different, Fred and I both speak the language of whisky, so the merger was an opportunity for us to grow our knowledge while having fun.  We wanted to take the whiskey lover’s palate to another place on the flavour map, to explore areas that have never been explored before. Legent begins with a historic Kentucky Straight Bourbon recipe that was created by Fred Noe’s family. I’m not familiar with the climate required for Bourbon. As opposed to the far more temperate climate of Japan, Kentucky’s extreme climate leads to speedier maturation. While continuing my sampling process, I was able to discern the way that Kentucky bourbon interacts within barrels over the years. We worked together to deliver a unique bourbon rich in Kentucky tradition and Japanese craftsmanship. 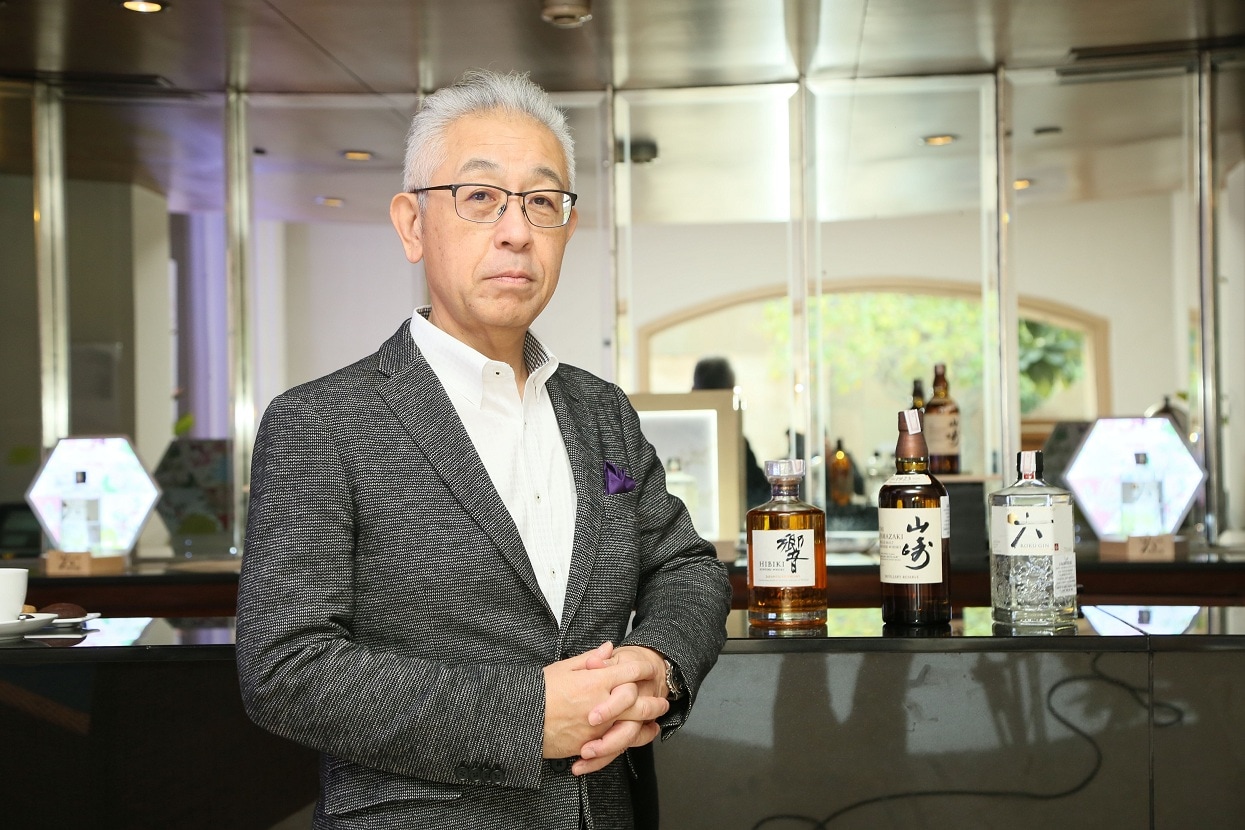 You travelled across India while working on the Oaksmith, "tasting, hearing and seeing" things. What was that experience like?
I visited India six times in the last year and travelled across the country to study how Indians like to drink whisky and what they enjoy. In Japan, we have a practice called Gemba, which basically means ‘the real place’. The idea is you go to the source to do your research and understand consumer behaviour. We visited small and big joints, including bars and thekas, to see how Indians are consuming whisky and what they are consuming it with. This helped us in understanding the nuances of Indian food and flavours and what could match perfectly with it. From these visits, I also got to experience what Indian bar food tastes like and what flavors would go well with it. I made the blend for Oaksmith using traditional Japanese craftsmanship, blended with Scotch Malt whiskies and American Bourbons. Oaksmith will be available at the price of an Indian whisky and the flavourful palate will be well suited to both beginners and connoisseurs alike.
Several countries apart from Japan -- that includes India -- make some exceptional single malts these days. How do you think the Scots view the popularity of these whiskies?
Indian whiskies are often examples of youthful exuberance, are quite enjoyable and have a defined style in their own right. I cannot comment on how the Scots see them, though.
What is your daily routine like?
I start the day with an early breakfast and usually avoid strong tasting food, especially for breakfast, to keep my taste buds pure. My job consists mostly of spending all day tasting whisky, hundreds of blends with the team. I do 100 such tastings a day, sometimes more than 200.
Murali K Menon works on content strategy at HaymarketSAC.
Read his columns here.
Check out our in-depth Market Coverage, Business News & get real-time Stock Market Updates on CNBC-TV18. Also, Watch our channels CNBC-TV18, CNBC Awaaz and CNBC Bajar Live on-the-go!