Updated : November 13, 2019 09:44 AM IST
She plays the role of Hitori, a Japanese-Malayali girl who is the love interest of Subramaniam, a character in the movie essayed by popular actor Soubin Shahir.
Directed by Ratheesh Balakrishnan Poduval, Android Kunjappan version 5.25 is the story of a father and son, and how it changes when the technology hits the human mind.
It was released in Kerala on November 8 and is set to be released in rest of South India this Friday.

Hailing from the quaint little town of Basar in Arunachal Pradesh, Kendy Zirdo never thought she would get to relish Idiyappam with curry in Kerala, her place of destiny.

Kendy who belongs to the Galo community of Arunachal had also never watched a South Indian movie before bagging a role in the sci-fi Malayalam comedy Android Kunjappan version 5.25. She plays the role of Hitori, a Japanese-Malayali girl who is the love interest of Subramaniam, a character in the movie essayed by popular actor Soubin Shahir. Recalling some details from her audition, the 25-year-old theatre student said she did a two-and-a-half-hour audition in Kochi and was asked to deliver lines in Malayalam.

"I got to know about this film through filmmaker Partha Borgohain and thought of giving it a try. I appeared for my very first audition in two different locations – one in an empty space, and another in a room that had a table and chair. I had to tell my lines in Malayalam, walk around and act. I got lucky, and ended up with my first film," said Kendy. 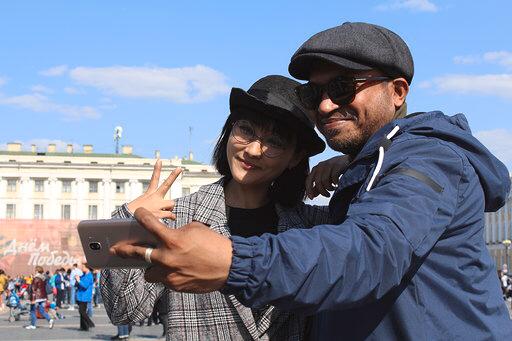 Kendy eventually developed the ability to understand Malayalam, and worked on her expressions while speaking the language.

"Even as I learned my lines, I found that some of the words in Malayalam are not pronounced the way they are written. For an actor, when you listen to your co-actor, and if you don’t understand the language, the expressions are hard to come – that was my biggest challenge. But I worked day and night for it, sat in front of the mirror, observed how my lips and tongue move for certain words…It was not at all easy."

Working with Soubin Shahir was a learning opportunity for Kendy, who initially had no idea of his stardom in the Malayalam film industry.

"I feel so lucky to know Soubin - thanks to AKV 5.25. It is my first movie, and I was very nervous about everything. I first met Soubin at the airport when we were travelling to Russia. From that very moment, he made me so comfortable - the way he treats and respect people, you will never feel he is already a big name in the industry…Must say, he has an amazing personality,” said Kendy, also narrating how Soubin would crack jokes on her high-heeled sandals. “It was so much fun at the sets every day – I would never know what they were all laughing at, cracking up over something,” she added.

Kendy’s parents had made it clear they did not approve of her joining theatre, but she is happy to see them sharing her promotional posts of the film in social media. Her father is a policeman and her mother is a Child Development Officer in Arunachal Pradesh. Kendy is the third child in a family of five siblings, and her sisters are in government service.

“There is no theatre in my state, and when I left Arunachal to study Theatre and Performing Arts in Hyderabad, my parents were naturally worried about my career. It’s their love and concern like any other parent, but I believe that somewhere deep down, they have faith in me. When this film happened, they did not say much but kept sharing my posts. That means a lot to me,” Kendy smiled.

Directed by Ratheesh Balakrishnan Poduval, Android Kunjappan version 5.25 is the story of a father and son, and how it changes when the technology hits the human mind. It was released in Kerala on November 8 and is set to be released in rest of South India this Friday.
Tags Android Kunjappan version 5.25 Arunachal Pradesh Kendy Zirdo Kerala Malayalam Soubin Shahir unwind