Joy in the time of coronavirus: Indian-Americans make place for the arts in a pandemic

Who would have thought you would be able to watch a festival of regional Indian theater live as you ate your breakfast in New York and your extended family in New Delhi could see the same plays in real time over dinner?

Recently the Indian Consulate in New York presented Vibrations, a Diaspora Theater Festival and this was not held in any theater or arts space but virtually right in your own home. It showcased three new plays, all created during the Covid-19 pandemic, uniquely woven together with actors each performing their own part in self-quarantine.

Shown via live streaming on Facebook and Youtube, these videos combined to become short, intriguing plays. It was a creative alternative for Dr. Ashok Choudhary,  founder and president, Indian Heritage and Cultural Association of New Jersey which does a Natya Darpan festival every year.

As Consul General Sandeep Chakravorty pointed out, “This is not really a theatre friendly platform, and I think we're one of the first in the world, perhaps, who have attempted this experiment. So, let us see how it succeeds, and I think we will be setting a trend for theater lovers all over the world.”

The chief guests were Dr Mohan Agashe, the noted Marathi actor who lives in  New Jersey, and Rahul Bedi, and was dedicated to Diaspora theater personality Usha Ganguly. The plays had an enthusiastic diasporic audience and there is already a plan for more such plays made by quarantined actors, for quarantined audiences. The next virtual series is set for May 30. Indeed, when the coronavirus pandemic hit New York, the health services, the schools and colleges, the businesses and normal life were all devastated. In the first shocks of the crisis, thoughts were just about survival and nobody had the bandwidth to think of the terrible blows to the social and cultural life of the city.

The lights were dimmed on Broadway, the home of American plays and dramas; iconic museums, art institutions, music halls, galleries and dance and music schools all were shut down and the creative life of the city had came to a halt.

The pandemic confined New Yorkers within four walls but bit by bit the art institutions and the artistes have come right into living rooms and bedrooms to entertain and educate them, from mainstream American organizations to ethnic music and dance events.

“The decision to cancel our concerts was particularly painful: music is a powerful source of comfort and healing, and we know that this closing is as profound a loss for our audiences as it is to our musicians and, indeed, the institution,” said President Deborah Borda of the New York Philharmonic Orchestra and now every week there are virtual concerts, including a much anticipated Mahler’s New York. As she noted, “In our 178-year history, the New York Philharmonic has weathered the US Civil War and two World Wars and survived the 1918 Spanish flu pandemic. We will be back!”

All the major museums and arts institutions now have a virtual footprint to reach the audiences in their own environment. It is now possible to take a virtual tour of The Metropolitan Museum of Art with The Met 360° Project. The Met offers web-based highlights, including 360-degree views of iconic spaces; behind-the-scenes videos; and explorations of exhibitions.

At the Sundaram Tagore Gallery, homebound art-lovers can visit a wonderful virtual exhibition of the late tantric artist Sohan Qadri and Detroit based artist Neha Pathak who is from Pune – without stepping out of the four walls of the home. ‘You can’t come to us so we are coming to you’ seems the mantra with virtual exhibitions which allows the audience to get up close to the art.

Cell phones and computers have become virtual classrooms and theaters during the pandemic. Many Indian-American artists have embraced the new virtual stage where they have been offering dance performances, music recitals and even comedy shows to entertain the housebound and acquire a whole new audience.

But while South Asian artistes have taken their performances online, they are truly struggling as so many were part of the gig economy where their income depended on constant live concerts and shows. According to Americans for the Arts there is a loss of nearly $90 million as of March 27, 2020. In New York alone, 50,337 arts-related businesses employ 396,666 people, and many jobs are in jeopardy.  While they wait for relief from the federal government, they still have many expenses to meet.

“Like many other industries, the arts field has been badly affected by the pandemic, and social distancing, while important to keep the virus from spreading, has forced the performances of the arts to be postponed or canceled,” says Raoul Bhavnani, founder of India Center Foundation, a nonprofit organization dedicated to the arts and culture of the Indian subcontinent,

He points out, “Millions of tickets have been refunded, tens of thousands of shows rescheduled, and with them, the careers of countless artists have been put on hold. While in the US there are some emergency funds from government and other private sources, the need far outstrips the availability of support.”

It is to help these artists who have lost income and audiences, the ICF has created The South Asian Arts Resiliency Fund (SAARF), a grant program for South Asian-American artists and arts workers who have been impacted by the economic fallout of COVID-19. Twelve artists from multiple disciplines, ethnic backgrounds and geographic diversity have received the first round of funding. 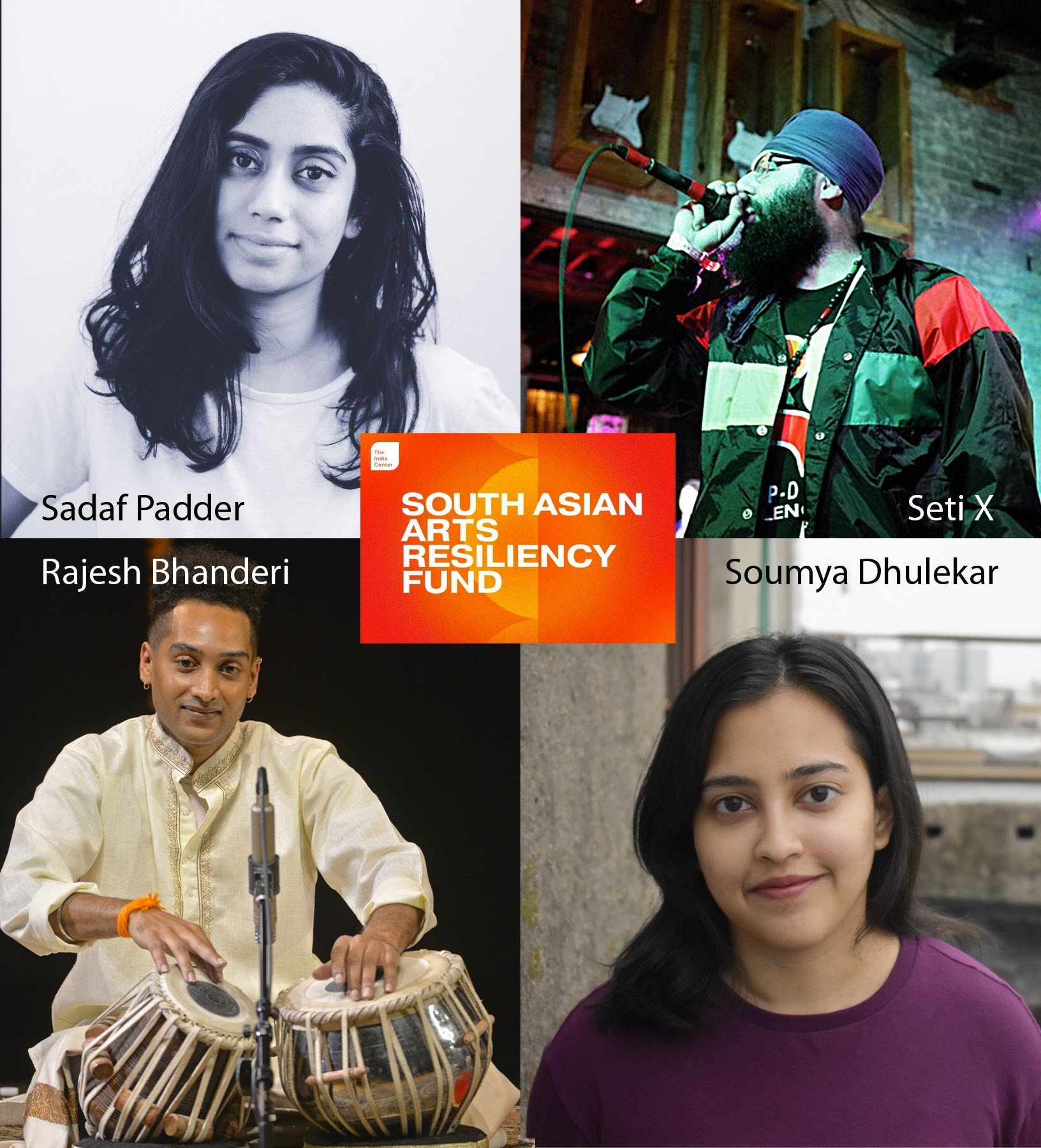 The initiative is open to any artists of South Asian descent working in the US to apply for funding to continue working on a project while the country is on pause. Seeded with initial funding of $20,000 from ICF, the fund has also begun to raise donations from the public.

The first grantees are an eclectic group of artistes which includes LA-based MC Seti X (aka Mandeep Sethi), curator, painter, educator and advocate Sadaf Padder, who is serving her community of Brooklyn as an Artists-in-Masks Resident with COPE NYC by designing PPE for essential workers along with NYC youth; Rajesh Bhandari whose 20-year career has seen him perform with Ustad Zakir Hussain, Falu Shah and Shakira. Soumya Dhulekar who also received a grant is a cartoonist whose work has been seen in anthologies and national exhibitions. “We have closed our first round of grants, and are in the midst of evaluating our second round. Our ability to continue to a third, fourth and subsequent rounds will be entirely based on our success in raising further funding,” says Bhavnani.

He adds, “Artists have seen their incomes decimated from the inability to perform live for paying audiences, make films, and rehearse music and the like.  Hundreds of artists have applied to the fund many of whom have told gut-wrenching stories of having to forgo critical expenses, struggle to make rent and put the most important projects of their careers on hold.”

"We want to encourage South Asian voices in the arts at all levels and make sure that our growing representation in all sectors of creative fields does not diminish because of this pandemic," says ICF Co-Founder Priya Giri Desai. 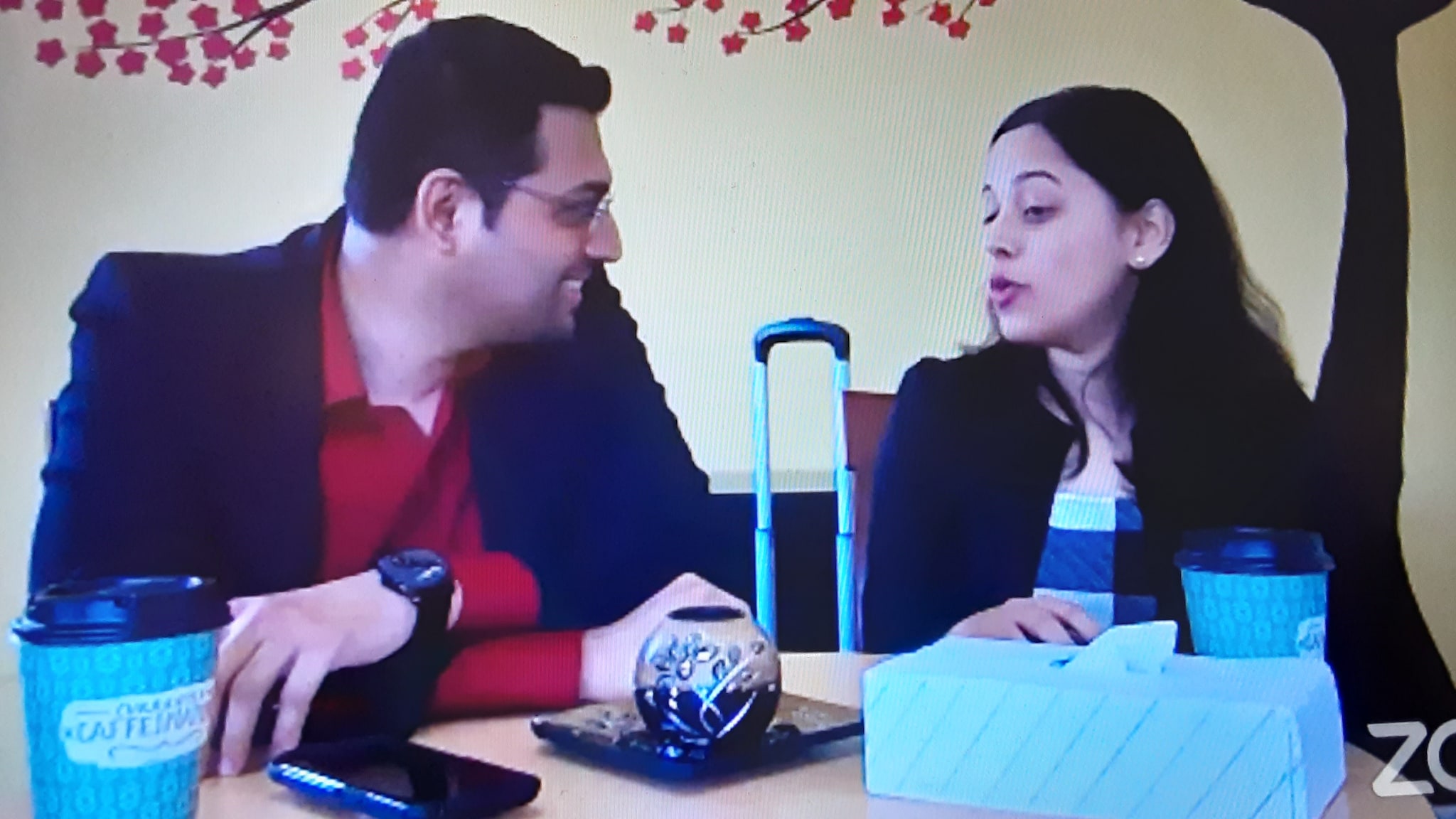 A scene from the Natya Darpan play 'Better Late than Never'.

“We have stipulated that the funds go towards a project that each grantee can do short-term while in lockdown.  The proposals have been impressive and wide-ranging from working on film scripts to developing new choreography to recording new music.” Details on 3rd round of applications will be released in early June.

As audiences and artistes meet in the virtual world, there are hopes for once again the joy of real live physical performances and engaged audiences in the real world.

As  New Yorkers start the slow journey to healing and recovery, there is hope for the arts. Says Bhavnani, “As with all aspects of life, there will be changes in the arts from coronavirus, but the arts are potentially the most adaptive and resilient form of human expression there is.  Artists are already adapting to the virus and they will evolve to meet the needs and desires of audiences as the virus abates.”