Jaipur Literature Festival 2020: Ten sessions you must not miss

Jaipur Literature Festival 2020: Ten sessions you must not miss

The 'Kumbh Mela of Literature' has an impressive line-up of authors from across the world in the 13th edition beginning on January 23.

From the 70th anniversary of the adoption of the Constitution of India to the climate change threatening the planet, the Jaipur Literature Festival this year has a wide array of weighty issues on the table.

The 13th edition of the Jaipur Literature Festival will be held from January 23 to 27.
The speakers include one Nobel laureate, economist Abhijit V. Banerjee, and several Pulitzer winners. Non-fiction and poetry have been given pride of place at the 13th edition of JLF to be held from January 23 to 27. There are 202 sessions spread over five days in the six venues of the Diggi Palace. While you hop from one venue to the other negotiating the nearly 40 sessions in a day, there are some not to be missed.
1. The Arts, Sciences and Creativity: Keynote address by Marcus du Sautoy and Shubha Mudgal
Oxford University's famous mathematics professor Marcus du Sautoy will team up with musician Shubha Mudgal to deliver the keynote address of JLF 2020. The topic is The Arts, Sciences and Creativity. Du Sautoy, the author of The Creativity Code, will delve into Artificial Intelligence and present his case about how algorithms are going to shape creativity. Mudgal, who published her first collection of short stories, Looking for Miss Sargam: Stories of Music and Misadventure, last year, is certain to have her own words of caution.
January 23, 10 am-11 am. Front Lawn.
2. Sanskrit as Living Language: Rachel Dwyer, Oscar Pujol, Madhura Godbole In conversation with Makarand R. Paranjape
It took seven years for Oscar Pujol, the Director of Cervantes Institute in New Delhi, to complete his Sanskrit-Spanish dictionary. It follows his Sanskrit-Catalan dictionary published earlier. Pujol will be joined in discussing the role of Sanskrit in the 21st century by SOAS professor of Indian Cultures, Rachel Dwyer, Sanskrit scholar and American Institute of Indian Studies professor Madhura Godbole, acclaimed for teaching of Sanskrit to western PhD students, and Makarand R. Paranjape, Director, Indian Institute of Advanced Study, Shimla.
January 23, 2:30 pm to 3:30 pm. Durbar Hall. 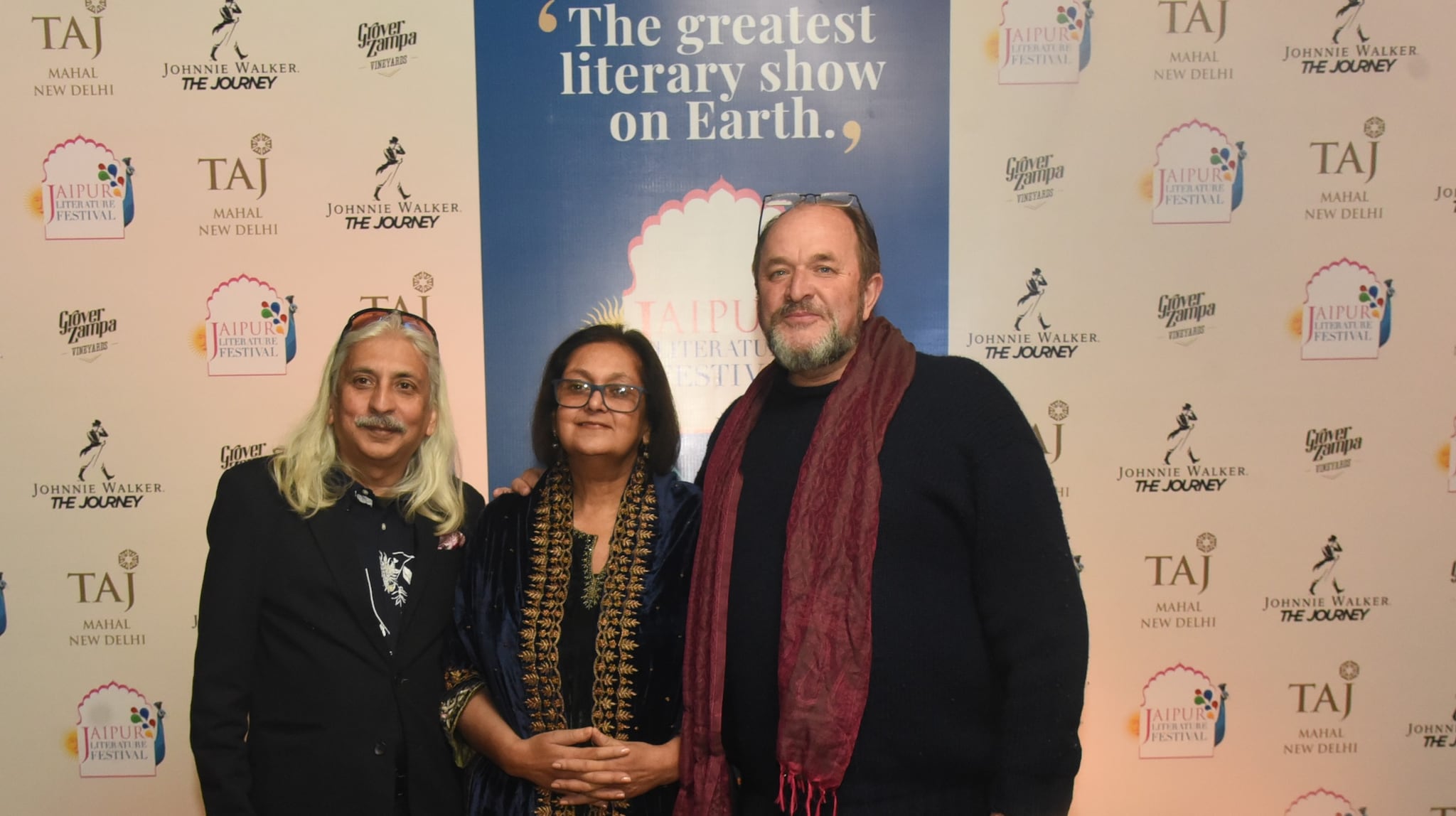 Festival producer Sanjoy K. Roy (left) with founder-directors Namita Gokhale (centre) and William Dalrymple.
3. Challenges for the new decade: Keynote address of Jaipur BookMark by Charlie Redmayne
Jaipur BookMark, the trading platform that runs parallel to JLF, is in its sixth edition this year. The keynote address of JBM on the challenges for the publishing industry in the new decade will be delivered by Charlie Redmayne, CEO of HarperCollins UK. Redmayne, the brother of Oscar-winning actor Eddie Redmayne, looks after HarperCollins operations in the UK, Ireland, India and Australia. Redmayne set up Pottermore, J K Rowling’s digital publishing business in 2011. Expect Redmayne to talk about big data on consumer behaviour and direction of digital publishing. JBM starts on January 22.
January 23, 11:15 am to 12:15 pm. JBM Haveli.
4. Jaipur Journals: The Writing Life: Namita Gokhale and Shashi Tharoor in conversation with Shunali Khullar Shroff
Author Namita Gokhale, one of the founder-directors of JLF, has just completed her 18th book, which will be released at the festival. Called Jaipur Journals, it is part satire and part ode to inspirations and heartbreaks of the writing life. Set against the backdrop of JLF, Jaipur Journals is a broad canvas of colourful characters like an icon of queer literature who receives a malevolent anonymous letter, a septuagenarian who carries her unpublished novel in a canvas tote bag, a burglar who is also a passionate poet, an American writer searching the vanished India of her hippie youth.
January 24, 11:15 am to 12:15 pm. Front Lawn. Cervantes Institute, New Delhi's Director Oscar Pujol, who recently published a new Sanskrit-Spanish dictionary, will speak on the role of Sanskrit in modern life.
5. Client Earth: Jairam Ramesh, Martin Goodman and David Wallace-Wells in conversation with Jeffrey Gettleman
Climate change litigation is going to be a much-talked-about subject in a world that has just seen devastating fires in the Amazon forests and Australia. US-based environmental law firm Client Earth has sued several big polluters across the world. James Thornton, the founder of Client Earth, co-wrote a book of the same title with his partner and author Martin Goodman. The book cites examples from around the world about citizens using public interest law to protect the planet.
January 24, 3:45 pm to 4:45 pm. Charbagh. Author Namita Gokhale will release her new novel, Jaipur Journals, which is set against the backdrop of JLF.
6. Of the People, By the People: The Indian Constitution: Navin Chawla, Madhav Khosla and Margaret Alva in conversation with Saif Mahmood
This year marks the 70th anniversary of the adoption of the Indian Constitution that came into force on January 26, 1950. The origins of the Constitution of India, the world’s longest, and its democratic ethos are going to be discussed along with the challenges. The backdrop of abrogation of Article 370 and the new citizenship law provides the stage for an impassioned debate. Among the speakers are former Chief Election Commissioner Navin Chawla, Madhav Khosla, who is Ambedkar Visiting Associate Professor at Columbia Law School, and politician Margaret Alva.
January 25, 11:15 am to 12:15 pm. Front Lawn.
7. The Rivers, The Sky, The Self: Easterine Kire, Arambam Ongbi Memchoubi and Mridul Haloi in conversation with Urvashi Butalia
A focus on women writers from the northeast will be filling a gap long felt about the representation of literature from the region. Among the writers from the northeast at the session presented by the Sahitya Akademi is poet Easterine Kire, whose writings represent the history and culture and Naga tribes, poet Arambam Ongbi Memchoubi from Manipur, and Assamese poet Mridul Haloi. Kire, who lives in Norway, recently published her non-fiction work, Walking the Roadless Road, which talks about the yearning for a peaceful future among the Naga tribes.
January 25, 12:30 pm to 1:130 pm. Samvad. Poet Easterine Kire will be among the women writers from the northeast speaking at the festival.
8. Tyrant: Shakespeare on Politics: Stephen Greenblatt introduced by Vishal Bhardwaj
Shakespearean and Harvard University don Stephen Jay Greenblatt, who won a Pulitzer for The Swerve: How The World Became Modern, about the origins of renaissance, will be at the Front Lawn of the Diggi Palace to talk about contemporary politics. Greenblatt's 2018 book, Tyrant: Shakespeare on Politics, was inspired by the election of Donald Trump in 2016. He will be sure to invoke Macbeth and King Lear to explain global politics today.
January 26, 10 am to 11 am. Front Lawn
9. Poor Economics: Fighting Global Poverty: Abhijit V. Banerjee in conversation with Sreenivasan Jain
Economist Abhijit V. Banerjee, who won the Nobel Prize for Economics last year, will be returning to JLF after eight years. Banerjee will keep his focus on the world's poorest, arguing that the economics of poverty gets mistaken for poor economics. His years of research through the Abdul Latif Jameel Poverty Action Lab founded by him in 2003 will be heard through stories and data. And how the world could defeat poverty.
January 26, 12:30 pm to 1:30 pm. Front Lawn. Hallie Rubenhold, author of The Five: The Untold Story of the Women Killed by Jack the Ripper.
10. The Five: The Untold Story of the Women Killed by Jack the Ripper: Hallie Rubenhold in conversation with Bee Rowlatt
The JLF audience will be hearing the moving tales of the victims of the mysterious serial killer in London in the late 19th century but in an entirely different way. The victims of Jack the Ripper were all women and portrayed in the media as sex workers. The Los Angeles-born British social historian and author Hallie Rubenhold will retell the real stories of Polly, Annie, Elizabeth, Catherine and Mary-Jane, exposing the misogyny surrounding the gruesome murders.
January 27, 3:45 pm to 4:45 pm. Front Lawn.
Faizal Khan curated India’s first football films festival with artist Riyas Komu at the 2011 International Film Festival of India, Goa. He was the curator of a football films programme in the Artists Cinema section of the second Kochi-Muziris Biennale in 2014.
Check out our in-depth Market Coverage, Business News & get real-time Stock Market Updates on CNBC-TV18. Also, Watch our channels CNBC-TV18, CNBC Awaaz and CNBC Bajar Live on-the-go!