Updated : July 06, 2019 11:06 AM IST
2019 marks the 50th anniversary of the Stonewall riots and for the LGBTQ community, it was a watershed moment.
For Indian gays with their vivid memories of homophobia and Article 377 in India, this 50th anniversary has been particularly sweet coupled as it is with World Pride Month and the Gay Pride Parade.

There was boisterous Bhangra and Bollywood music on the streets of New York– and no, it wasn’t Navratri, Baisakhi or even Holi – it was the annual Gay Pride March, and Indian gays, lesbians, bisexuals, queers and transexuals were coming out in the open and celebrating their sexual orientation and their community.  No beating about the bush – they were out there, marching in solidarity with the larger American LGBTQ  community and happy to be counted. 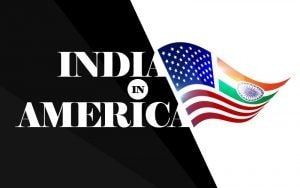 2019 marks the 50th anniversary of the Stonewall riots and for the LGBTQ community, it was a watershed moment when they stood up to hate and intolerance, the beginning of the gay rights movement.

“For many who marched or jammed the sidelines, it was hard to understand just how much prejudice was once directed at gay men, lesbians and transgender people. In 1969, laws in 49 states made gay sex between consenting adults a crime. In New York, it was illegal for two men to dance together until 1971,” wrote The New York Times.

For Indian gays with their vivid memories of homophobia and Article 377 in India, this 50th anniversary has been particularly sweet coupled as it is with World Pride Month and the Gay Pride Parade. The last weekend of June saw national celebration across many parts of the US.

“As I walked down Fifth Avenue during World Pride yesterday and wearing a pride flag as a cape, I felt visible, I felt heard, I felt moved and I felt like a superhero,” says Vaibhav Jain, a global public health researcher.  “I was so happy to walk hand in hand with my husband and show the world how proud I am of my sexual orientation and how far I’ve come from the days when I was bullied as a child in India.”

Earlier this year, Vaibhav Jain and Parag V. Mehta had got married in a traditional Jain ceremony in Central Texas, a big desi wedding with 500 guests. Mehta, who is the Executive Director for Mastercard’s Center for Inclusive Growth, believes that “the Stonewall riots in the summer of ‘69 signalled the end of victimhood and the beginning of acting up and fighting back. That night marked the beginning of the end of police brutality and violent hate crimes which disproportionately target transgender people of colour. It was the beginning of the end of stigma.” Vaibhav Jain and Parag Mehta in the Pride Parade in NYC.

As Joshua Patel, a young activist in New York says: “I feel strongly that in movements, we tend to take many steps forward and many backwards. It's the nature of the beast.” Patel has worked closely with the Lakshya Trust, an organization founded by  Prince Manvendra Singh Gohil, which strives to provide equal rights to LGBTQ people all over India.  He is now working on starting a similar organization here.

Neeral Sheth of Chicago knows well of the benefits that have come to the gay community in recent years - In 2016 he and his partner Anu Hazra had a full-fledged big fat Indian wedding in Chicago officiated by a Hindu priestess, surrounded by family members from both sides. Sheth, who works on LGBTQ mental health and Hazra who works with marginalized communities with AIDS prevention, both marched in the parade with Trikone, one of the oldest gay advocacy groups in the US. 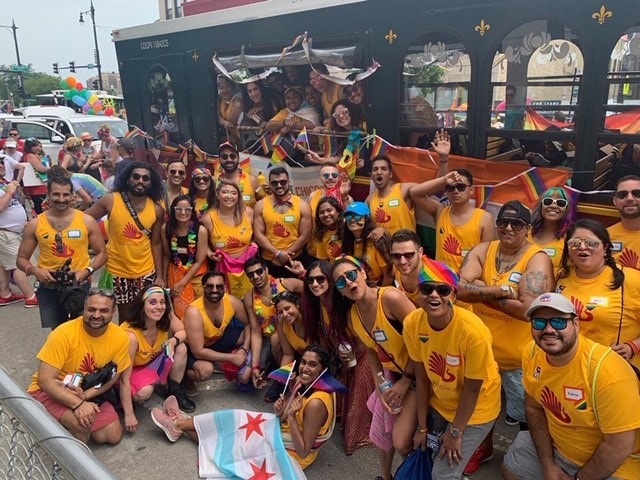 Neeral Sheth, Anu Hazra and others at the Pride Parade in Chicago

“Pride was so powerful for many of us. We Bhangra’d and garba’d our way through the gay district of Chicago, Boystown.  Not only has it been 50 years since the riots at Stonewall, but it is the first pride for me after IPC 377 was overturned,” says Sheth. “ It feels like the LGBTQ+ South Asian community that I'm surrounded by has a greater sense of freedom and is energized by the progress that is being made in places like India and Bhutan in their decriminalization of homosexuality.   Lots more needs to be done to move towards equality, but this was a significant first barrier that was finally overcome.”

Sharmistha Ray, an artist and TED fellow, has memories of many Pride parades. “My family immigrated to America from Kuwait in 1997,” she recalls. “I was 18 and started college. I struggled with coming out publicly for many years. Being from an immigrant Indian family made it an exponential challenge. As Indians, we are raised to think about community first over our individual wants and needs.” 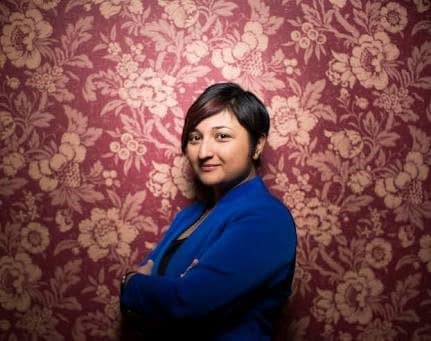 She discovered the parade was about a different kind of community, friendship and support and that gave her courage. As she says, “The parade is a remarkable symbol of authenticity and freedom. We live in a bubble in New York, so it’s easy to forget that so many people around the world still live in the closet, out of fear. My greatest triumph has been to fully embrace my identity and bring it into my art, working professionally in the creative field for almost 15 years in Mumbai and New York. I’ve done it while being a queer woman from the subcontinent, no less.”

Finally, what’s on the wish list of the Indian-American gay community? Says Joshua Patel: “I feel that we are just getting started. In the next 50 years, I would like to see the US ban conversion therapy in all states, provide more inclusive workplace programming for transgender citizens, and LGBTQ history curriculum added to elementary schools.

In India, I would like to see all these – with one critical addition - the right to marry the one you love. Marriage is not only a sacred union for families to provide blessings for, but it is a fundamental right for two consenting adults.”

Vaibhav Jain and Parag Mehta point out that many gains have been made since Stonewall – homosexuality has been decimalized in the US, same-sex marriages have been legalized and children can be adopted or conceived via surrogacy by same-sex couples who also enjoy federal benefits just as do heterosexual couples.

Still as they admit, it’s still a rocky road ahead: LGBTQ individuals still don’t have any federal protection in the workplace and can be fired for just being who they are, transgender individuals have been banned from enlisting in the military service, and a recent judgment by the U.S. Supreme Court gives any individual the right to refuse services to LGBTQ individuals based on religious exemption.

As  Neeral Sheth muses, “Right now is the time for people with privilege and in positions of power to make a difference by supporting the LGBTQ+ community in any way they can.  The good news is, just like what happened after Stonewall, the community is empowered, mobilized, and growing.  As more and more people demand equality, the other barriers will start to fall.”

Soham Chokshi, a transgender who goes by the name of Ishani, is an artist and is writing a book. She expresses the feelings of many in the LGBTQ community when she says: “The challenges for LGBTQ+ people in our current "age of diversity and inclusion" and especially for transgender people of colour, are morphing into new, unforeseen challenges. Desi communities are often very insular, orthodox, and patriarchal. In the next 50 years, I'd like to see - both here and in India - a cultural and political shift in which the gifts, skills, and magic of LGBTQ+ people are cherished and utilized.”