Yet in the time of coronavirus, they lie empty - a stark still life of empty chairs and tables, as millions of New Yorkers self-quarantine and practice social distancing in this strange new world.

Restaurants are some of our favourite places, our hideaways, our escape with friends. Yet in the time of coronavirus, they lie empty - a stark still life of empty chairs and tables, as millions of New Yorkers self-quarantine and practice social distancing in this strange new world.

New York was once the city which launched thousands of restaurants – The National Restaurant Association estimates that 15.6 million people work across 1 million restaurants in the United States and annual sales of $899 billion were projected for this year.
Now the industry stands decimated – at least for the moment – with shuttered doors, laid up workers, no clients and no income. The city has hundreds of Indian restaurants and all have been caught up in the whirlpool of the coronavirus. A few brave souls have opened for delivery but it’s not an easy task considering that homes have turned into self-created fortresses and many consumers are paranoid about the possibility of COVID infections even through contactless delivery. 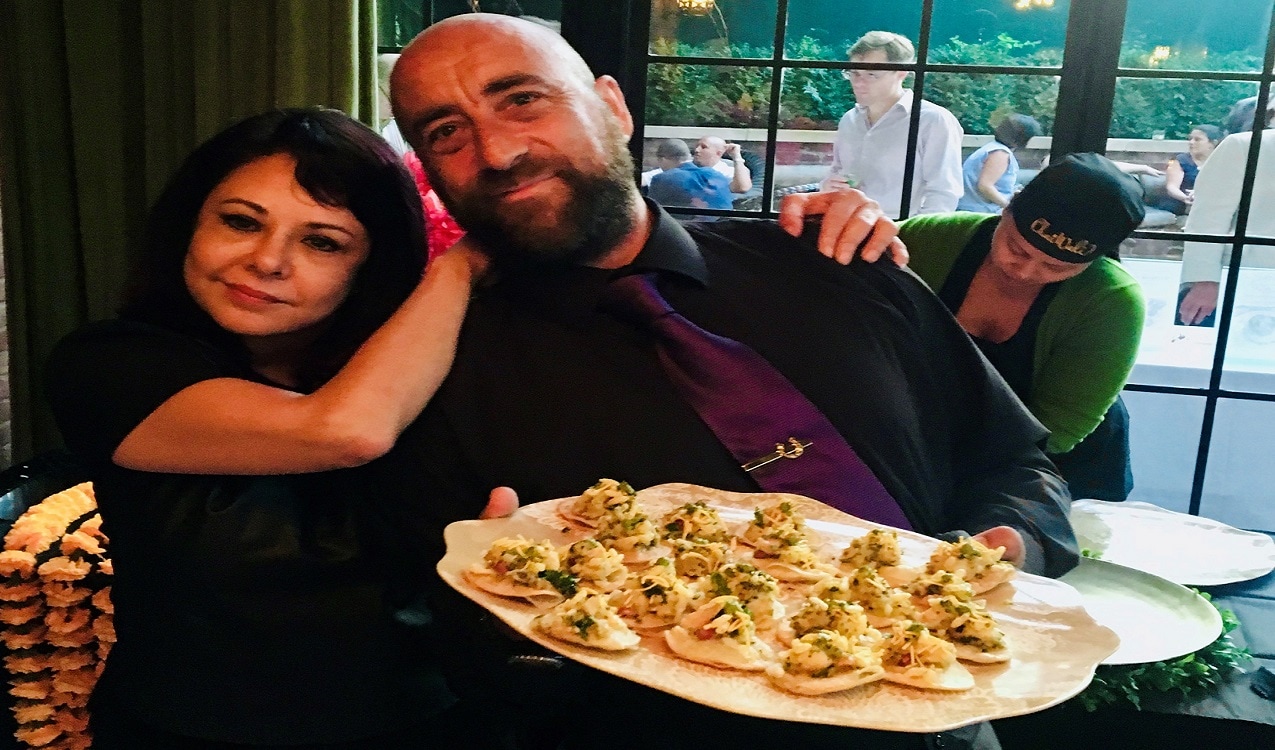 Anita Trehan with a team member from Chaiwali
It’s a painful time as restaurateurs wait for help from the federal government and try to find new ways of helping their workers and keeping their business afloat. In the future, the restaurant business will have to be about reinvention and persistence.
Anita Trehan is the chef and owner of the much loved Chaiwali in the Bronx, and she had only just reopened after a two-year shutdown due to city required renovations. As she says, “Laying of people who are hourly shift workers was probably the most difficult decision I had to make.” She started a GoFundMe for her workers, many of whom have not received government benefits as yet, and many of her customers contributed to that and it also helped her team with emotional bonding. Chaiwali has submitted for financial help and the application has been approved but the funds are still pending.
Trehan decided not to open for deliveries as she felt it would be impossible to keep a six-foot distance during food preparation. She says, “It is a model which did not work for us and I felt it was not worth putting the workers at risk.” Her restaurant is shut but as she waits, she says “During this time I am listening and learning and I have no doubt things will be different when we reopen.” Home-cooked food from Tagmo for detribution to elderly New Yorkers in collaboration with New York department of ageing.
Gaurav Anand, who owns Moti Mahal Delux, Bhatti Grill and Awadh is doing deliveries as they wait to restart the restaurants but is also spicing things up with innovations. He recently introduced Manchurian Club – a new Indo-Chinese concept from his restaurants for takeout and delivery. In the meantime, he is keeping food lovers engaged by sharing the secret sauce that goes into his best signature dishes with videos and recipes on Instagram. So until fans can get to eat the real thing they are making the home versions of Moti Mahal’s butter chicken, kali daal and hara-bhara kebabs!
Surbhi Sahni, who owns Saar Bar and several other restaurants with her husband Chef Hemant Mathur has transformed the way she works by starting a new home food business called Tagmo in which she offers a meal plan and delivers perfect homemade Rajastani, Punjabi, Bengali meals, along with desserts. Last year she had launched Tagmo as a sweets company with all South Asian women employees but seeing the need of the hour, she transformed it into a meal delivery program.
Sahni says, "We love feeding people the foods of India and our weekly meals reflect how nutritious and diverse Indian food is. Each week, we feature a different regional cuisine and also offer gluten-free and vegetarian food. ”
It is also about helping in the COVID crisis: She says, “Our community is our lifeline, so we offer a pay-it-forward meal donation to people in need and frontline medical workers. We're also partnering with NYC Department for the Aging to bring nourishing meals to elderly New Yorkers.”
Indeed, several restaurateurs are teaming up with nonprofit organizations to feed the needy as well as health care workers. Chef Chintan Pandya and owner
Rony Mazumdar of Adda Indian Canteen and Rahi, have linked up with World Central Kitchen and  Off Their Platet to provide hot Indian meals to hundreds of hungry people. Recently the two also joined the Food Council of @cityharvestnyc, which helps to feed nearly 1.2 million New Yorkers who are facing food insecurity. Says Mazumdar of their new role, “As restaurant entrepreneurs, our passion is feeding people.”
Someone who is feeding the hungry in India during the pandemic is Vikas Khanna, the noted Michelin chef and host of MasterChef. He has had a two decades relationship with New York City with many ups and downs. He started by helping his chef friends with dishwashing, cooking and service at banquets and later started his own catering company which has done several events at the UN including the Modi dinner for global dignitaries. Khanna has been a chef at several NY restaurants including Junoon and is currently the chef of Kinara in Dubai.
Now quarantined in New York during the pandemic, his 24-hour job and passion has become feeding the thousands of migrants in India and anyone who needs a meal, be it in an age-old home or orphanage. He has used Twitter to connect people from different walks of life to feed the hungry. Working with his enormous food industry contacts, the government, and well-wishers he estimates he has crossed distribution of over 3 million dry rations meals in over 75 cities in India during the lockdown. As he says, “We are getting stronger and better in solidarity.” Jimmy Rizvi (centre), with the late Rishi Kapoor and his wife Neetu Kapoor.
In the last two months so much has changed with the world and with people’s lives. Jimmy Rizvi is the owner of Gupshup, a happening restaurant in Manhattan. Rishi Kapoor and Neetu Singh became regulars at his restaurant, and Rizvi even got his mother to make haleem and pavas which Rishi craved and had them delivered to his apartment. Rishi had told him he would be returning to New York by March 2020 for his follow-up medical checkups. We all know what happened after that – we lost Rishi Kapoor and New York City lost its groove.
Gupshup is now temporarily closed and offers contactless deliveries. Rizvi is also sending out care packages to clients’ favourite charities or hospitals – in that way they can support both the essential workers and the staff of Gupshup, which is a small business.
As Rizvi points out, the future hours of operation will have to be cut down and so will the staff and the whole operation will have to be much leaner. Since they banked so heavily on the office crowd coming in for lunch as well as tourists from around the world, opening for lunch may not be an option since many people may continue to work from home remotely. He adds, “Some people have said that 2020 is all about survival and I’m not going to be positive until we actually see some breakthrough in cure. It’s not going to be life as usual – we are going to be living in a different world, even a year later.”
Indeed, reinvention may be the order of the day as we move into a new world where social distancing may become the new normal and a fact of life.
As they prepare for the future, restaurateurs are continuing to prepare food for New Yorkers through delivery as well as for nonprofit organisations to feed the hungry in this time of crisis. Let’s hope for better days, for normalcy to return to New York, and for restaurants to once again become the centre of camaraderie and celebrations.
Lavina Melwani is a New York-based journalist who blogs at Lassi with Lavina.
Read her columns here.
Check out our in-depth Market Coverage, Business News & get real-time Stock Market Updates on CNBC-TV18. Also, Watch our channels CNBC-TV18, CNBC Awaaz and CNBC Bajar Live on-the-go!