In the spirit of survival

A slanting bookshelf, floating laptop, an upturned television and a chair glued to the roof. Bangladeshi artist Marzia Farhana's installation at the Kochi-Muziris Biennale is a menagerie of memories from the massive floods that wreaked havoc in Kerala four months ago. Titled Ecocide and the Rise of Free Fall, the Dhaka-based artist's work uses furniture, books and material collected from flood-hit areas. The objects in mid-air poke the viewers into a world trapped in human exploitation and destruction of nature. "We spoke to many artists and asked if they would like to respond to the floods," says Anita Dube, curator of the fourth edition of the biennale, which began on December 12. "Some said we don't move from disaster to disaster," adds Dube, the first woman curator of the contemporary art show held across venues in Fort Kochi in Ernakulam district, one of the worst-affected in the deluge. Farhana's work at the biennale pointing to disasters triggered by human-nature conflict is among the many responses of artists participating in the influential event to social, economic and political issues confronting the world. Coming in the aftermath of the protests against the Supreme Court verdict on allowing entry of women to the famous Sabarimala temple and #MeToo movement in India, several art works address gender equality, sexual harassment, refugee crisis and racism. 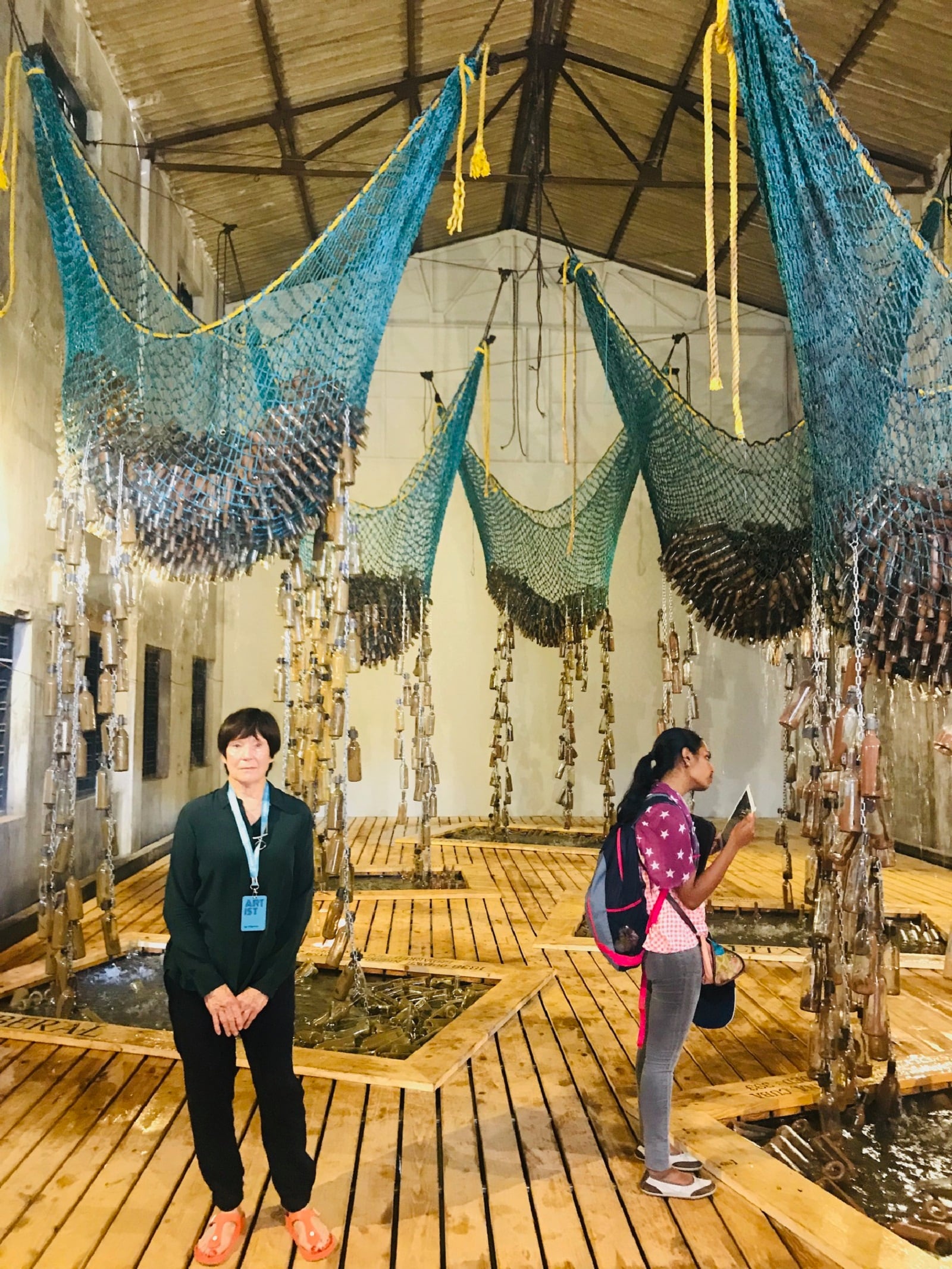 South African artist Sue Williamson (left) illuminates the dark and dirty corners of history with her installations, Messages from the Atlantic Passage (above) and One Hundred and Nineteen Deeds of Sale.

South African artist Sue Williamson's installations at the Aspinwall House venue of the biennale is a retelling of the movement of people for slave trade. An artistic mediation of history, Williamson's two installations act as a memorial to the people who were treated like cheap commodity. Titled One Hundred and Nineteen Deeds of Sale, one of the installations specially commissioned by the biennale reveals the sale of people from Malabar in North Kerala by the Dutch East India Company in Fort Cochin to work in its properties in Cape Town.

"The Dutch recorded everybody who came into Cape Town," says Williamson, part of a pioneering generation of South African artists whose works addressed social change during apartheid. The work, based on the deeds of sale she found in Cape Town archives, shows shirts with names of each slave, name given by the master, their age, sex, place of birth with names of buyers and sellers, prices paid and date of transaction. One hundred and Nineteen Deeds of Sale follows an exhibition by Williamson in Cape Town in September in a symbolic "return journey to Fort Cochin". 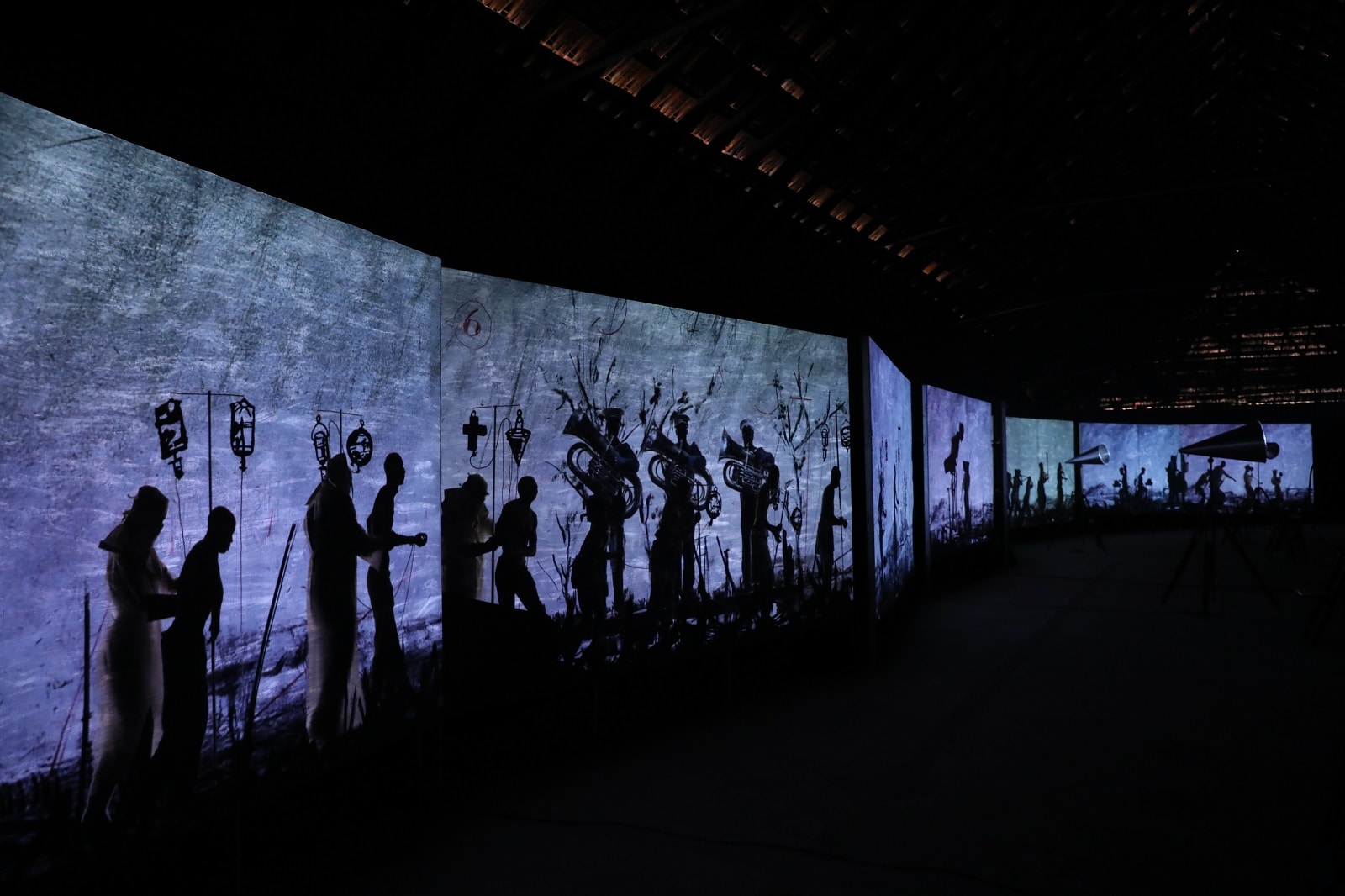 More Sweetly Play the Dance, an eight-screen, ten-channel audio-visual installation by South African artist William Kentridge on migration is a highlight of the biennale.

Messages from the Atlantic Passage, the second installation by Williamson, is a magical world built from archival records and materials like fishing nets and glass bottles. Created from months of painstaking research in American and British universities where she found database of old shipping records, Williamson's work reflects on the 32,000 voyages that took place between 1525 and 1866 moving 12.5 million African people to the New World. Some 10.7 million survived the dreaded Middle Passage, disembarking in North America, the Caribbean, and South America. Fiery feminist Mexican artist Monica Mayer's participatory installation, The Clothesline, has people writing their experiences of sexual harassment, and trauma from Kerala's floods to be hung on a clothesline. Reads a note:  "When was the first time you were sexually harassed? How did you feel? When I was 5, my father." The work, a continuation of gathering of women's experiences Mayer started in 1978 in Mexico City, replicates the domestic act of hanging laundry that many women share. Kochi-based Malayali sculptor Vinu V V assembles naked bodies in wood to talk of the travails of migrant workers and gay men. Titled Ocha, which in Malayalam means sound, the work has masked men with farming tools and men impaled on coconut tree trunks, in a replacement of gender about a ritual in Kerala where women suspected of possession of spirts were forced to drive nails on temple walls with their foreheads. 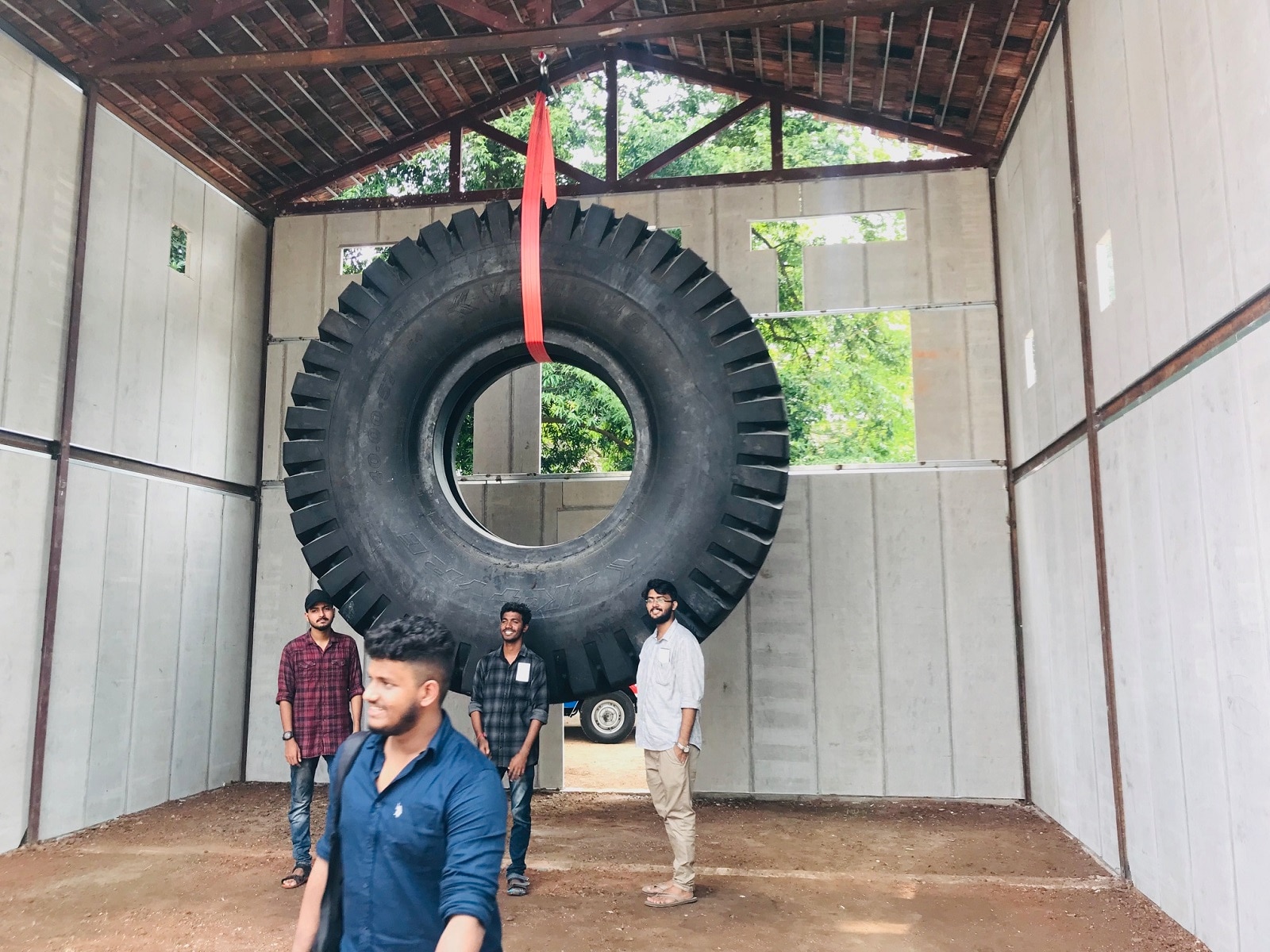 Danish subversive artist known by the ficitious name E B Itso has hung a three-tonne tyre at the Aspinwall House to depict the burden of development.

Mr. Sun by Danish subversive artist known by the fictitious name, E B Itso, shows a gigantic tyre hung in mid-air to trace the journey of rubber in Kerala. Itso's installation, also related to Kerala's floods, evokes the burden of development. "I found this giant tyre weighing three tonnes in Kerala and ordered it online," says the artist, who went to plantations in the state to witness the process of making rubber. Itso, who is always chased by authorities for living in abandoned underground spaces in Amsterdam, often films his life that questions established order to create art works. Oorali, a group of travelling musicians from Kerala, is participating in the biennale to sing in honour of the fisher community that helped flood victims in Kerala.

The first biennale anywhere in the world to have the largest share of women artists - 62 in 95 art projects this year - Kochi-Muziris Biennale is already influencing the art world. The International Biennial Association (IBA), the umbrella body of biennales around the world, is meeting in Kochi for its fifth general assembly this weekend and charting future direction for art events. "Kochi has become a critically important biennale," says artist Bose Krishnamachari, Kochi Biennale Foundation president and co-curator of the first edition of biennale. "The IBA was supposed to hold its general assembly in Buenos Aires, Argentina, but moved it to Kochi," adds Krishnamachari.

The Guerrilla Girls, the American feminist group against gender discrimination in art participating in the biennale, cheered the gender representation at the event. "Here it is to the first woman to curate the Kochi-Muziris Biennale and the first biennale to have 50 per cent women artists," beamed the two founding members of the group, known for their anonymity behind gorilla masks. Dube, who has demolished many barriers in her curation, however, hasn't broken one ritual of Kochi-Muziris Biennale---its fetish for a 12PM moment on 12/12 to begin every new edition. While this year's biennale remarkably combines art with activism and chooses artists from the fringes of society, it will be holding public discussions in a newly-built pavillion, an architectural monstrosity that hides symbolic stripes of of wood under ugly steel girders. The good news is the pavilion is designed to dismantle, for building 12 homes for flood survivors once the biennale is over.