“I feel very blessed to be part of a story that needs to be told” – Swara Bhaskar on Bollywood, #MeToo and speaking out

Updated : November 09, 2018 09:36:42 IST
Swara has been hailed for her eloquent interviews in which she slams misogynists, and has been just as hated for her Twitter tirades against the RSS and affiliates, who troll her mercilessly.
She’s been vocal in her support of actor Tanushree Dutta, who accused co-actor Nana Patekar of sexual harassment on the sets of a film 10 years ago, and who raised the subject again this year sparking off India’s #MeToo movement.

In Anaarkali of Aarah, which released in March 2017, Swara Bhaskar played the role of a stage performer who is famous in her Bihar village for her bawdy songs. Based on true-life events, her character Anaarkali’s confident interactions with men undergo a dark transformation when the vice chancellor of the local university molests her during a performance, and then uses his clout with the police to malign her and ensure she can’t file a complaint.

He taunts her that she is “just a little less than a prostitute”. Determined to restore her self-respect after long months of suffering social ignominy and homelessness, Anaarkali shrewdly exposes the VC’s actions at a gathering of senior police officials, his college students and family.

In the film’s climax, after dancing a wild taandav (victory dance) in front of him, she spits, “Randi ho, randi se thoda kam ho, ya biwi ho, ainda marzi pooch ke haath lagayiyega (Whether prostitute, little less than a prostitute, or wife, ask for consent before you touch).” The poster for Anaarkali of Aarah, in which Swara plays a feisty stage performer who is up against a powerful man.

The vindication in her stance, the shame on the man’s face, and the horror of the audience are gooseflesh-inducing in their prescience: 18 months later, India would erupt in #MeToo, and women would call out sexual harassers at their workplaces, shaming them in the very society that had enabled their predatory behaviour.

Even more impressive than her on-screen talent is her outspoken off-screen persona: Feisty, articulate and unafraid to speak out, Swara has walked her talk, doing things her own way. She’s been hailed for her eloquent interviews in which she slams misogynists, and has been just as hated for her Twitter tirades against the RSS and affiliates, who troll her mercilessly. But Swara makes it elegantly clear: censure only emboldens her further.

Daughter of Ira Bhaskar, a professor of cinema studies at Jawaharlal Nehru University (JNU), and Chitrapu Uday Bhaskar, a naval commodore (now retired) and famed defence analyst, Swara admits that she gets her independent attitude from the liberal upbringing her parents gave both her and her brother, Ishaan. It is no wonder then that the freedom she experienced from a young age has given her the conviction of her beliefs, and she does not hesitate in voicing them on issues she feels strongly about.

A student of English literature from Miranda House in Delhi University, Swara pursued her Master’s in sociology at JNU. She admitted in an interview that she was drawn to Bollywood after being fascinated by Chitrahaar, a TV programme featuring Bollywood songs, which was popular during her childhood. “No, I didn’t want to be Madhuri Dixit, I wanted to be Shah Rukh Khan,” she joked. Though she enjoyed quite a bit of success acting in box-office hits such as Tanu Weds Manu (2011) and its 2015 sequel, and the Salman Khan-starrer Prem Ratan Dhan Payo (2015), it is her offbeat roles that she holds dear to her heart.

“In every character I seek to play, in every story I want to be part of, I am basically trying to do something new – I am trying to learn something more as a performer, as an artiste, to challenge myself in a new way. And then if I can be a part of a story that is important, that needs to be told, if I can be the vehicle to tell that story, then I feel very blessed. I think that Nil Battey Sannata, Veere Di Wedding and Anaarkali of Aarah have all given me that opportunity, so I really feel very happy. I’m counting my career blessings right now!” says the 30-year-old.

She’s been vocal in her support of actor Tanushree Dutta, who accused co-actor Nana Patekar of sexual harassment on the sets of a film 10 years ago, and who raised the subject again this year sparking off India’s #MeToo movement. “What happened to Tanushree was criminal,” Swara said in an interview to Verve, referring to the way the film’s producers reportedly called up goons from a political party to bash Tanushree’s car and threaten and intimidate her. 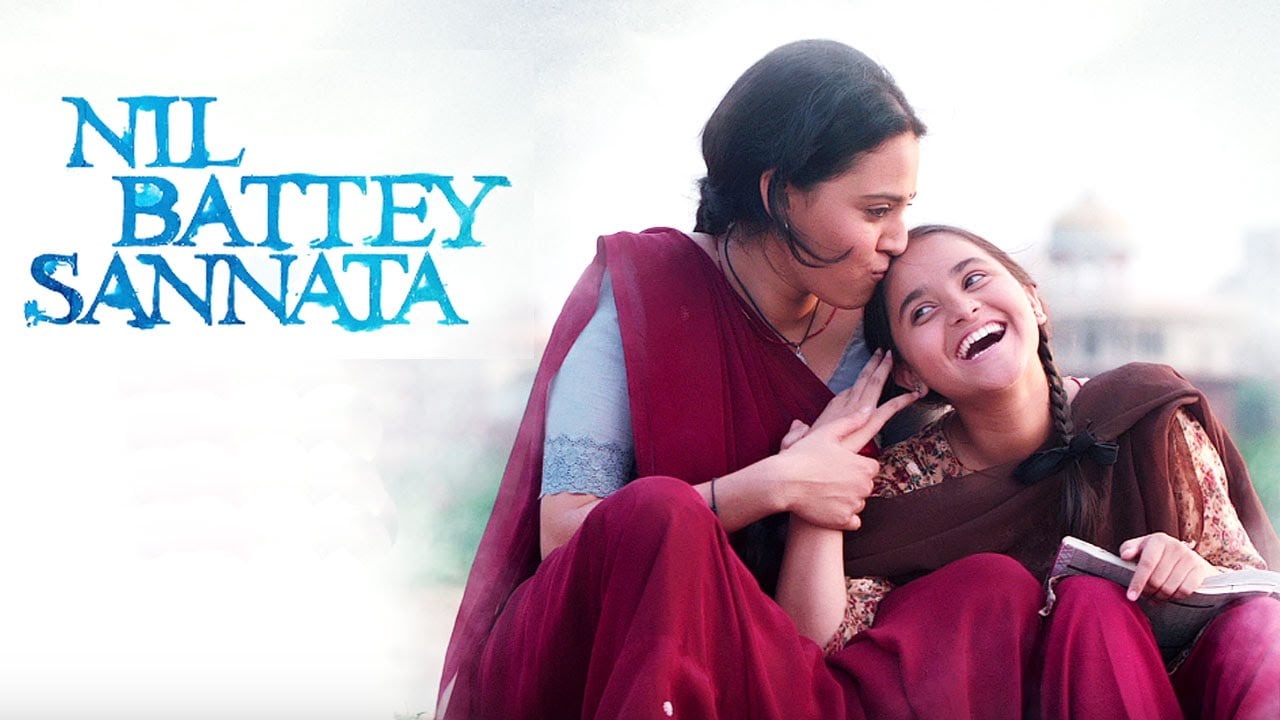 In Nil Battey Sannata, Swara played the role of a single mother who works four jobs to raise her 15-year-old daughter, and ends up going to school with her.

In a Film Companion talk show, the award-winning actor further opined that #MeToo survivors have reached a point when “we don’t care if you don’t give us work anymore. That moment – when you stop fearing the consequences – that’s when you begin to see change. And we’re actually seeing that change in Bollywood.”

Another occasion when Swara spoke her mind was her much-talked-about open letter to director Sanjay Leela Bhansali, in which she said his film Padmaavat had reduced women to ‘talking vaginas’, a comment that earned her even more hate on social media from Bhansali supporters and those generally offended by women using words like vagina in public discourse.

Swara explains, “I wrote that letter to Bhansali because I felt very strongly that the film was glorifying [outdated rituals like] sati and jauhar and I didn’t agree with the perspective with which the film showed those acts. Perhaps they did it unwittingly.”

Padmaavat had become such a part of the national conversation, she goes on, and the huge controversy over its release had seen many points of views being flung about. “I was one of the people speaking most vocally for the rights of Bhansali to make the film the way he did, for the rights of the film to be released in a safe way. I was one of the most vocal critics of the Karni Sena [a Rajput caste organisation that opposed the release of the film]. But I did feel that if there is a critique from a woman’s perspective, then that should also become part of the conversation. The letter did not originate from a place of any vicious intent. I think that everyone associated with the film, even if they disagreed with my letter, recognised that it was coming from a very clean place in my heart.” 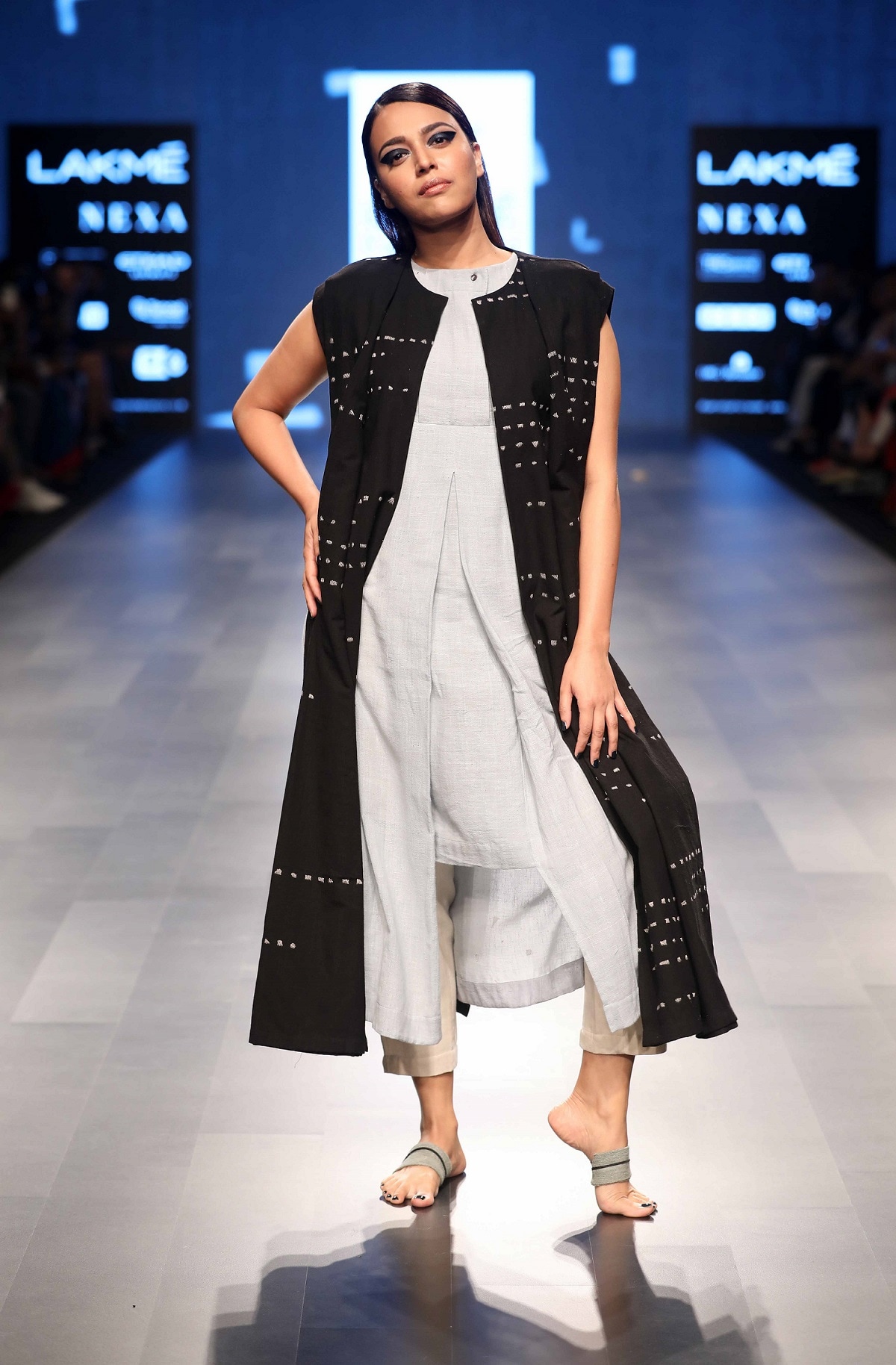 Swara walking the ramp barefoot for label Crow this year.

This has been a year of miniseries for Swara – she has shot three web series for different digital platforms, including It’s Not That Simple Season 2 for Voot and Rashbhari for Applause Entertainment. On the personal front, Swara shares that she’s having a big Diwali celebration back home in Delhi because her brother got married this year. “So it’s his and my sister-in-law’s first Diwali as a married couple.”

Soon after Diwali, she will start shooting for her next series where she plays a cop. “But it’s great, I love working so I’m always very happy to go back on set,” she smiles. No doubt her fans look forward to seeing her back on screen too.

Disclosure: All matters brought to Network18’s attention which are within the purview of the workplace have been forwarded to our Internal Committee for Prevention of Sexual Harassment at the workplace for appropriate action. The Internal Committee is independent and all recommendations made by it are followed through by Management action. Network18 Group has a zero tolerance policy when it comes to sexual harassment. The company complies fully with all legal provisions and seeks to ensure a speedy and effective Redressal on complaints.
Tags #MeToo campaign #MeToo movement Metoo Nana Patekar Padmaavat Sanjay Leela Bhansali Swara Bhaskar Tanushree Dutta unwind
Published : November 10, 2018 12:01 AM IST