Updated : December 20, 2019 06:15 PM IST
The three sisters – fondly known as Charu, Ranju and Bairu – also formed their own band, Voice Virus, which offers stage performances.
The performing arts run in their family: Their father K.V. Jayaraman was hailed as one of India’s most famous magicians and mother Jayam is the only female shadowgraphy artist in India.

These twins have more than just their genetic makeup in common – Ranjani Mahesh and Bhairavi Gopi also have a unique musical sensibility that has made them something of a phenomenon on music platform Smule, where the simple small-town girls from Tamil Nadu have a loyal fan following of over 40,000, and lakhs of YouTube listeners.

The performing arts run in their family: Their father K.V. Jayaraman was hailed as one of India’s most famous magicians and mother Jayam is the only female shadowgraphy artist in India. 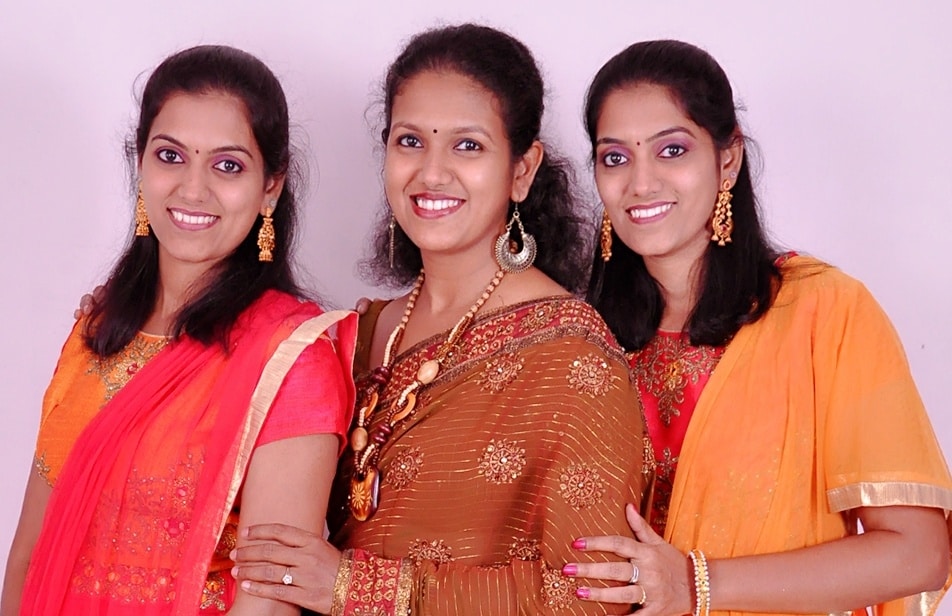 The twins with their sister Charumathy (centre).

The twins have another sister, Charumathy, who was almost like a godmother to them as she made sure that they followed their passions, and who is now the third member of their music band Voice Virus. Their family – the Palghat Brahmins – also has a musical lineage, and they naturally grew up surrounded by music with their grandmother being a classical singer and their father a violinist.

From singing together for recitals at the Bharatiya Vidya Bhavan as children, Ranjani was in college when she discovered she had a 'vocal cord twist' and was devastated with the doctor's dismissal of her career as a singer. But music was her life so she just moved her classical interests to an instrument. She opted for the veena with her guru Rajalakshmi Padmanaban. It was a fortuitous choice as the veena is almost like the mascot for classical music in southern India and so worked well for her in the long run. 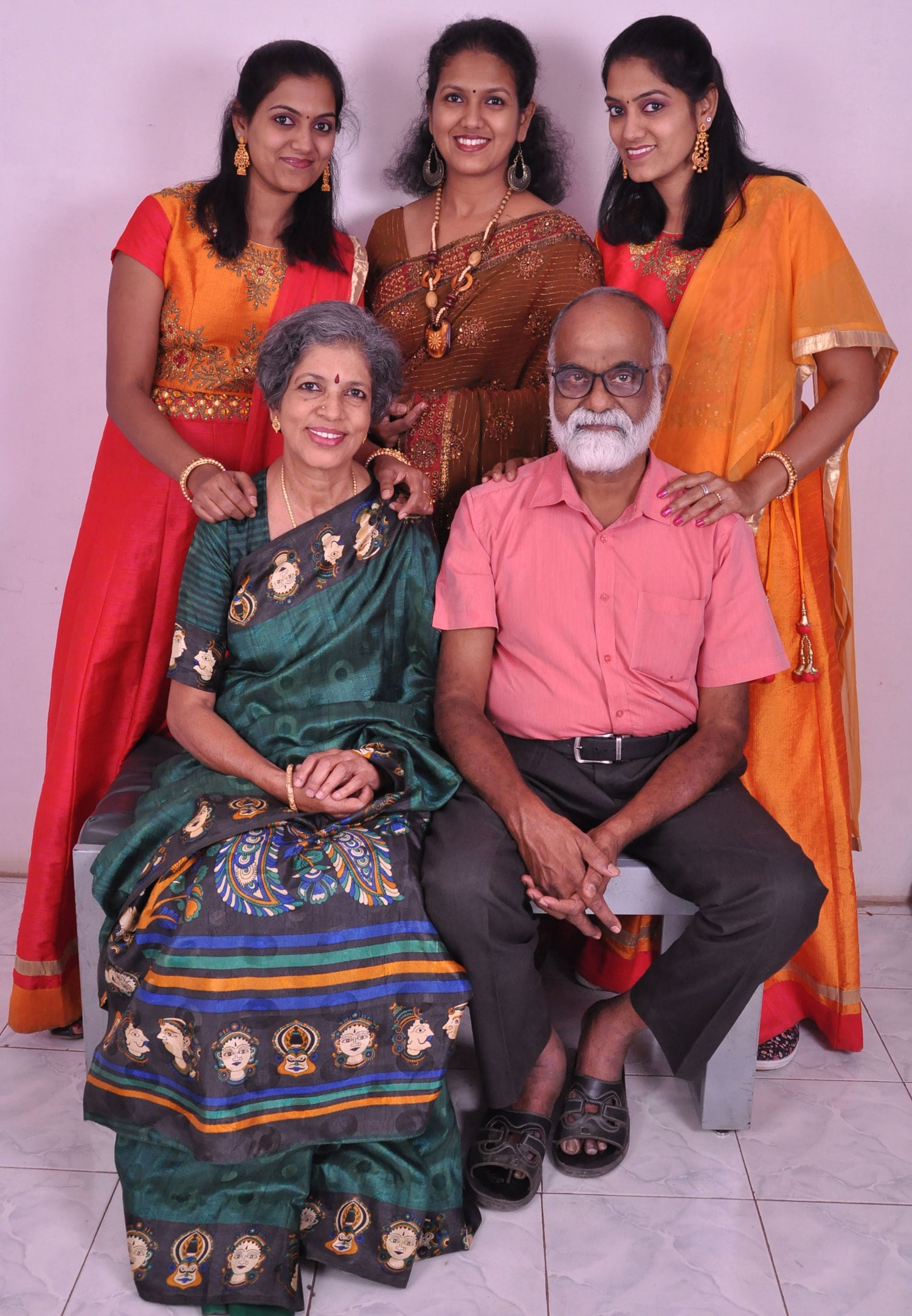 L-R: The twins with their sister Charumathy, father K.V. Jayaraman, and mother Jayam.

Ranjani completed her Master's in nutrition and dietetics, while Bhairavi completed her M.Phil in Tamil literature. Having been born just two minutes apart, both of them got married just two days apart as well at age 22. Ranjani had an arranged marriage that took her away across the seven seas to London, a big jump even for her. Bhairavi, who is a classical singer, fell in love and married a rhythm artist from the orchestra that she was a part of and stayed on in Coimbatore.

Both sisters won their own share of accolades for their respective input along the years: if Bhairavi won state awards for her singing in college, Ranjani, in turn, won accolades for her expertise in playing the veena for 15 years and also in London where she lived for almost 10 years, being part of many fusion bands such as the London Ragajyoti. She was even part of an all-women band, Pendent World, along with other Irish and English musicians, and travelled for performances to the US and Europe as well. 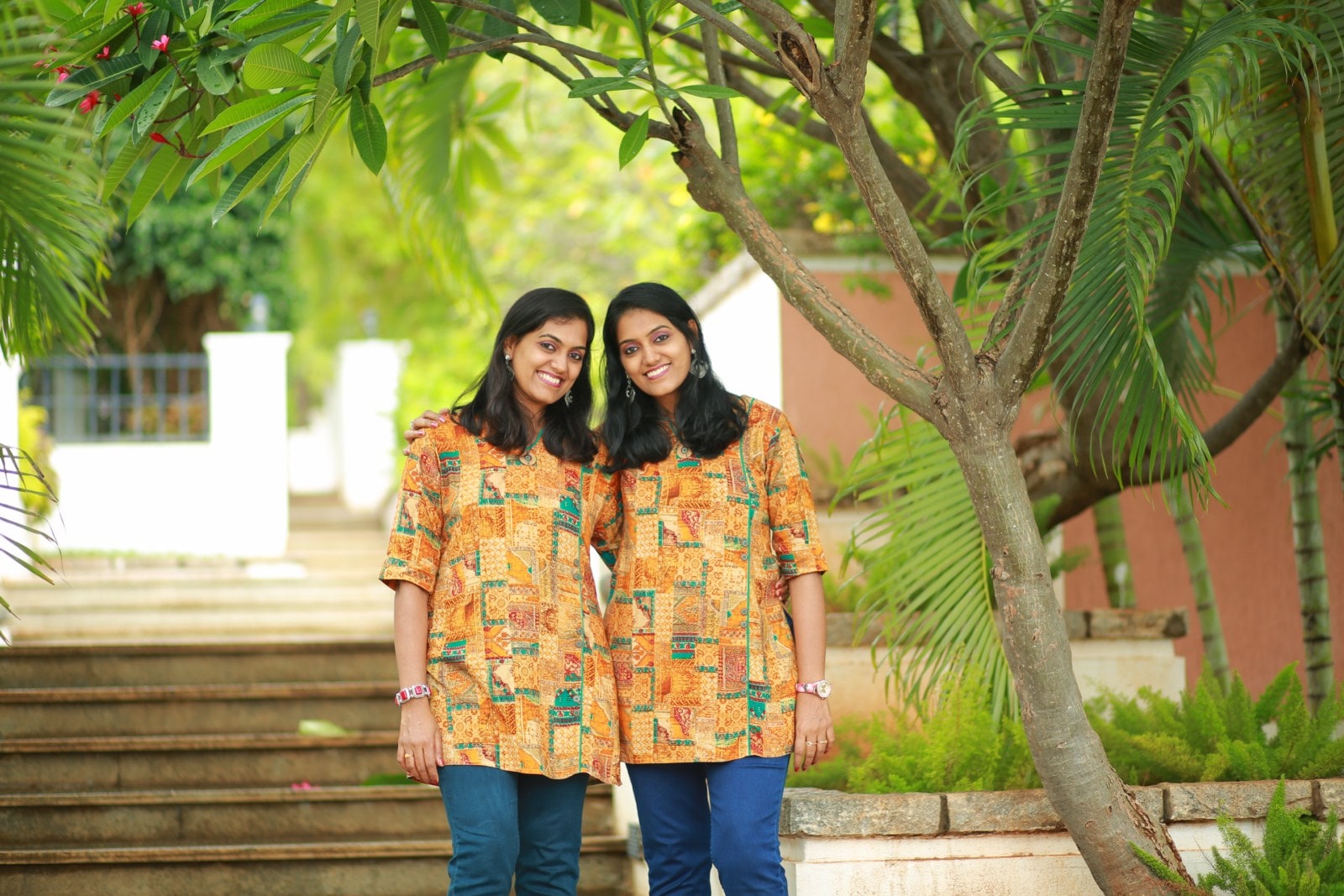 Ranjani Mahesh and Bhairavi Gopi.
While Ranjani went from Manchester (five hours away) to London to keep her passion alive, Bhairavi continued her M.Phil and worked as a lecturer in India. She moved on to become an RJ. In 2014, they were all united by destiny.

Having done a course in special education side-by-side in the UK, Ranjani on her move back to India decided to help autistic children combining her music as a medium of therapy. Classical Indian ragas have been proven to have a positive effect on the mind. Ranjani worked as a therapist in the Shankar Mahadevan Academy in Bengaluru. Her other sister Charumathy joined her at that point. 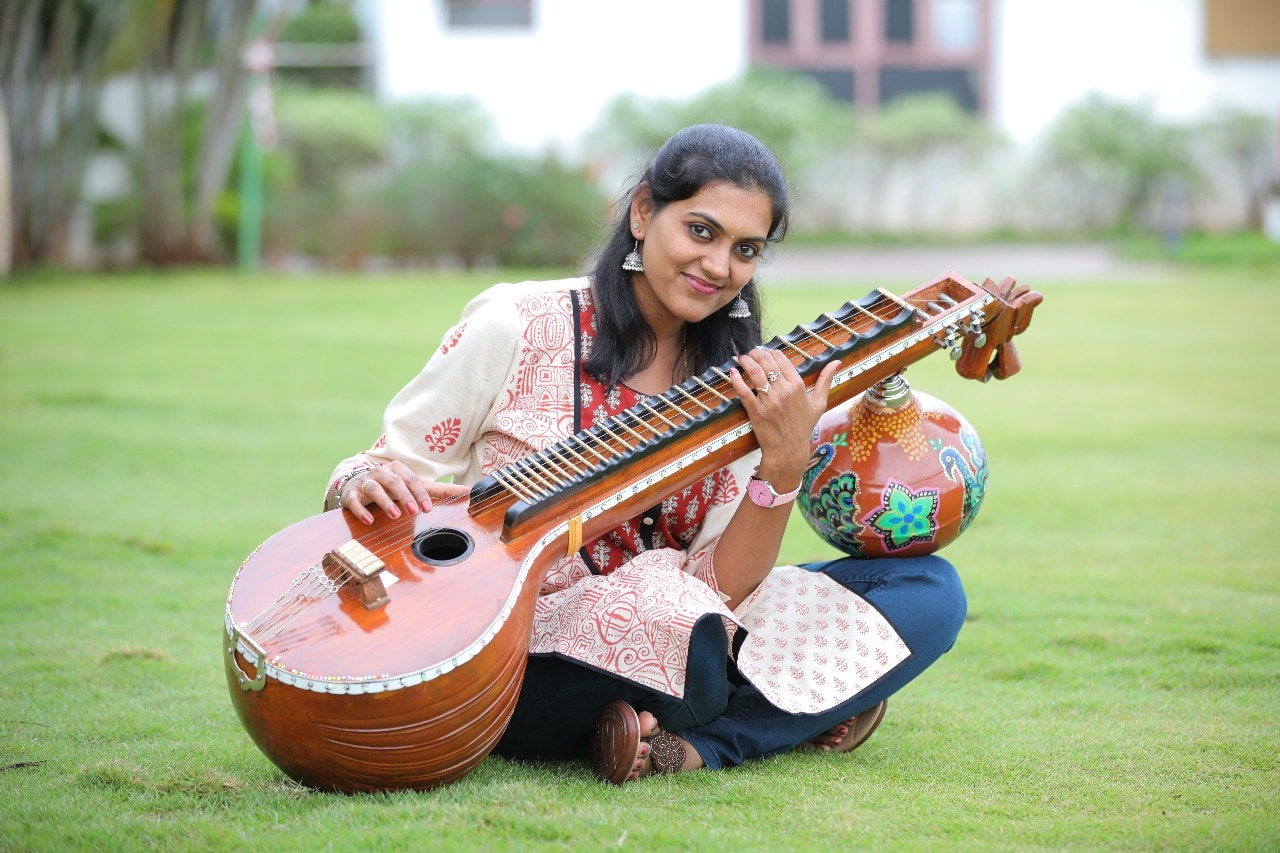 Today, the 39-year-old twins, their sister, and their families are finally enjoined in their lives and careers in Coimbatore. Ranjani continues to sharpen her veena skills with her current teacher Phani Narayana Veena Vadali of Hyderabad. Besides being a professional singer, Bhairavi also works as an RJ, dubbing and voiceover artiste, stage anchor and game-show organiser.

The three sisters – fondly known as Charu, Ranju and Bairu – also formed their own band, Voice Virus, which offers stage performances and has been featured on regional and national TV stations. Specialising in fusion music – combining Indian classical and filmi music in their own unique style – they also produce and direct their own music videos just in time for various special days of the year such as Valentine’s Day, Mothers’ Day and Indian festivals like Onam, many of which often go viral on social media. 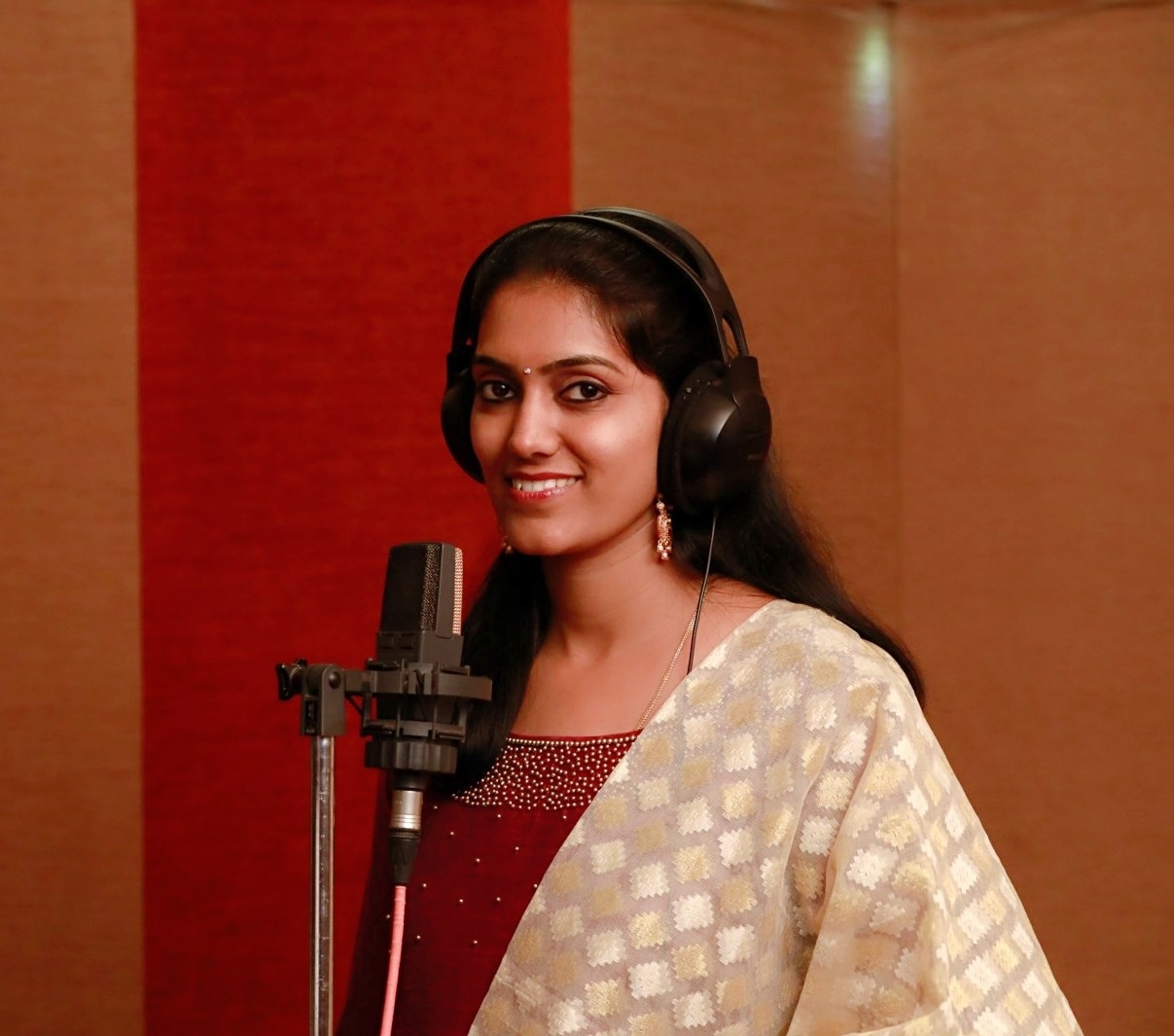 They admit they were lucky to be in the right place at the right time, as the digital world has lapped up their gifts. YouTube made them overnight sensations with their unplugged music and they soon came to be known as the 'Smule Twins'. Bhairavi’s Nitham Nitham Chicken Burger song and Ranjani’s Despaciato have gone viral on social media giving them over a million hits in less than a month. Surely the story of the Smule Twins is the stuff of a blockbuster movie itself!