How the modern iteration of a business, patronised by the likes of Indira Gandhi, contemporised heritage weaves and textiles

Updated : October 04, 2019 12:34:32 IST
The House of Angadi, which draws its roots from an ancestral handloom business, opens a multi-brand luxury retail outpost.
Designed by conservation architect Abha Narain Lambah and Brinda Somaya, it references the Chettinad and Dravidian architectural traditions.
The ancestral business patronised by the likes of Indira Gandhi and Nargis Dutt, hit headlines when their saris were worn by actor Deepika Padukone at her wedding.

K Radharaman defies all clichés associated with being a designer. Though well-dressed in a subtle, understated sort of way, in beautifully designed togs, err…menswear, he doesn’t possess the peacock-like quality which has come to define the ‘designer’ image.

Yet, Radharaman, the founder, CEO and design head of the House of Angadi, is among the few significant designers to have emerged out of Bangalore, a city associated more with IT companies than with craftsmanship. The bearded gentleman, shimmering between sleek and gruff, can build a textile empire on the back of his designing skills as effortlessly as he can talk about the millennia-old textile traditions of India. 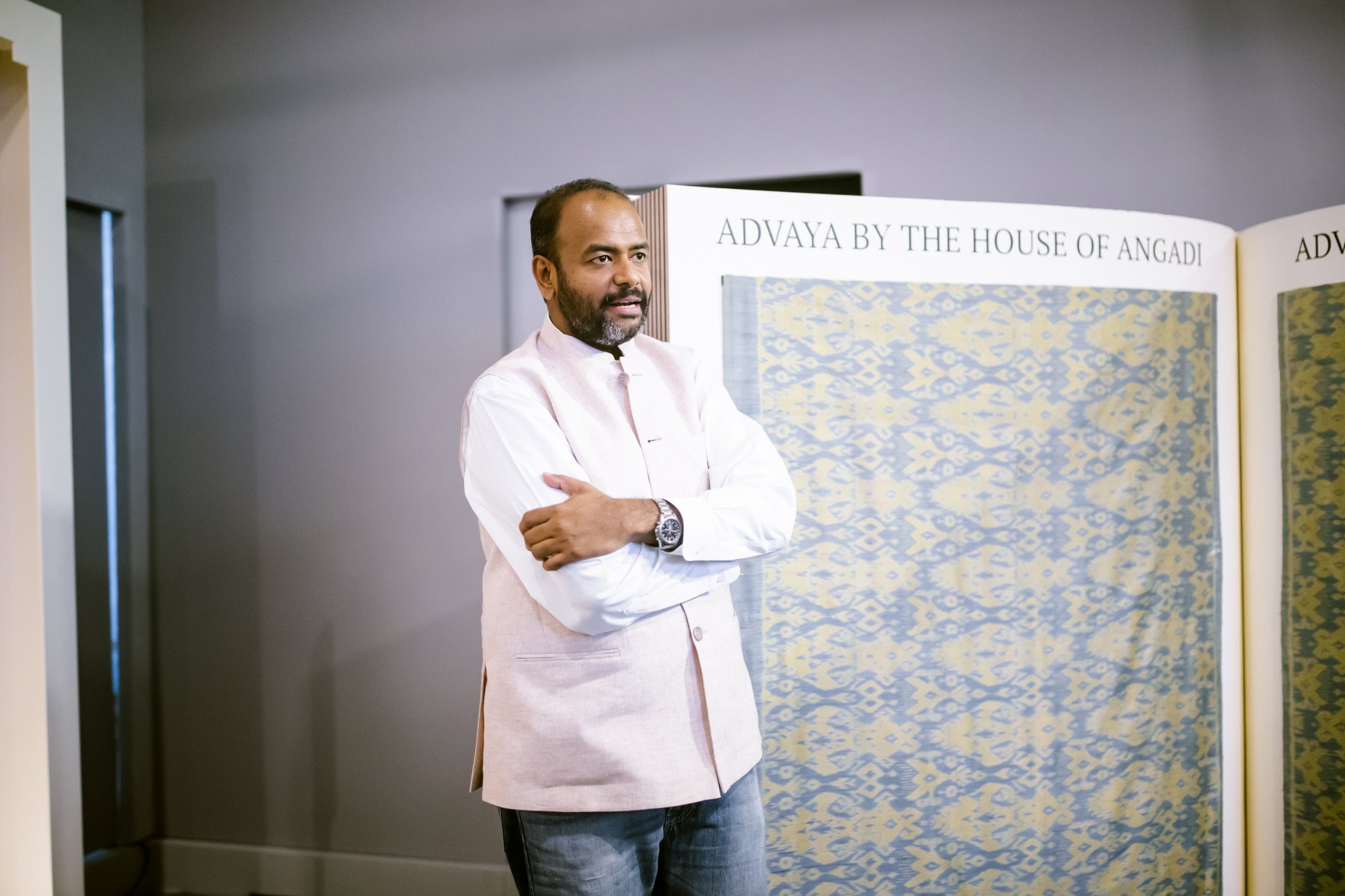 Radharaman, the founder, CEO and design head of the House of Angadi, is among the few significant designers to have emerged out of Bangalore, a city associated more with IT companies than with craftsmanship.

The House of Angadi and his contemporary label ADVAYA are contemporary renditions of traditional textiles, dyeing techniques such as Ikat and weaves, and India’s living unstitched garment heritage. Just last week, Radharaman opened the hefty and carved doors of Angadi Heritage, a landmark retail destination for Indian textiles and handcrafted luxury in Jayanagar.

For now, the House of Angadi’s new luxury address in Bangalore, designed to perfection by architects Abha Narain Lambah and Brinda Somaya, plays host to Angadi and Advaya saris, and a host of sustainable and understated fashion labels - both menswear and womenswear from across India.

Angadi Heritage is a play in a design oxymoron – epoxy gold glinting surfaces, decorative and painted ceilings and opulent chandeliers that drop-down several floors are quietly juxtaposed with antique wood door carvings and sculptural installations drawn from the Chettinad and Dravidian traditions. Many of the architectural flecks, like the long windows across the height of the tiered sandstone structure that tapers on top, allude to south India’s austere and yet architecturally grand palaces.

The brands Bangalore can buy at Angadi Heritage include Shades of India, 11.11, Injri, Suketu Dhir, Herringbone & Sui, Antar Agni, Anavila, and several more. “The idea was to get luxury Indian brands and labels, which work with textiles and garments, into Angadi Heritage.” Besides this sprawling luxury space, the 600-year-old House of Angadi runs two more outposts – Angadi Silks in Jayanagar and Angadi Galleria in Sadashivnagar, which is where, till now, the ingenious Advaya label is retailed from.

For the connoisseurs of Indian luxury and lovers of the timeless sari traditions, Angadi isn’t such a new entity. Indira Gandhi was one of the patrons of the saris weaved by Radharaman’s father, and so was Nargis Dutt. Jaya Jaitley, the former Samata Party president and textile curator, was spotted at the launch. Generations of chic handloom sari-wearing women have relied on Angadi to dress them in weaved masterpieces.

However, the House lay rather low until the brouhaha created by Sabyasachi Mukherjee ‘inadvertently’ being given the credit for their lush gold sari worn by Deepika Padukone at her wedding last year, exploded on India’s buzzing fashion scene. It pushed Radharaman, and his elegant label, to the forefront.

Radharaman inherited the legacy business form his father, R. Kothandaraman. According to the family grapevine, they hail from a community of Padmashali weavers, one of the traditional silk weaving communities of southern India, who migrated from Warangal to the Tanjore river delta in modern-day Tamil Nadu. Kothandaraman, who took over in 1954, modernised the business, bringing a fully-integrated handloom weaving facility and electricity and telephone services to the weaving clusters.

Radharaman, a graduate of Cornell University, remembers growing up listening to fascinating stories of the royal families and the contemporary royalty that his father, and grandfather, had weaved for. “I graduated as an engineer and all peers went on to work in Silicon Valley or became investment bankers. And here I was, looking at coming back to a city where temperatures touched 45-degree centigrade, to work in the family business,” he laughs. “But I was always fascinated by the tales told by my grandfather. Normally a reticent person, he opened up about the heritage of the business, a passionate tale I captured on video. What we had was worth preserving. The family and community had been court weavers to the maharajas. My grandfather, considered a legend, was sought out for during elections to gain ‘blessings’ of the entire community that look up to him. In the 60s, my father had imported mechanised dyeing machines from Italy and worked with the likes of Pupul Jaykar and Kamladevi Chattopadhyay. A kind of entrepreneurial and social welfare spirit informed the business and I was not letting go of that legacy.”

In 2001, Radharaman set up the House of Angadi, focused on retail with the first store in Indiranagar. He was driven by the belief that if a product, in this case, the sari, was made ‘differently’, it would sell well. “I used design interventions to make some changes. My design was not very radical then. Most people generally play around with motifs to change the design.” However, in 2012 when the House of Angadi set up base in the US and worked with global brands and fashion labels to create silk and silk-based textiles for them, the scion began making some dramatic design breakthroughs.

At an exhibition on the top level at the new Angadi Heritage, Radharaman chose to dip into his family vaults and his contemporary chest to put together an exquisite collection of archival heirloom pieces and pieces that reflect his experimentations under the label Advaya. Angadi Heritage is a play in a design oxymoron – epoxy gold glinting surfaces, decorative and painted ceilings and opulent chandeliers that drop-down several floors are quietly juxtaposed with antique wood door carvings and sculptural installations drawn from the Chettinad and Dravidian traditions

At the House, Radharaman mixes innovation and exemplary craftsmanship to create a new prototype for luxury handloom businesses in India. “For the western market, we began to play with the basic construction of the textile, which led me to also establish Advaya. I began exploring ways in which the traditional Kanjeevaram could be blended with linen and khadi instead of the traditional silk-by-silk composition. The idea was to fuse a weave as opulent and sumptuous as Kanjeevaram with a modern and minimal linen and khadi. It is a misconception to claim that Kanjeevaram is a weave. It, instead, refers to the Kanchipuram cluster of weavers and includes motifs, technique, colour and construction.”

Expectedly, he faced objection from weavers who considered this ‘rule-breaking design’ as sacrilege. For thousands of years, the basic structure of the Kanjeevaram, woven in the jacquard weaving technique, had not changed even though the weavers worked with new motifs and colours. “It is not easy to blend silk with linen or khadi. The weaving techniques for them are different, the strength is different, and the elasticity of the yarn is different,” says Radharaman.

In the linen-blended kanjeevarams, while the weft is linen, the wrap is kora. Many of the beautiful weaved saris in the Advaya collection interestingly sport a matt finish, with just the zari borders adding the sheen. “Linen reflects the richness and translucency of silk. Khadi borders became a rage with the younger crowd since it is very subtle and you can wear it to both formal occasions and at work,” says Radharaman. 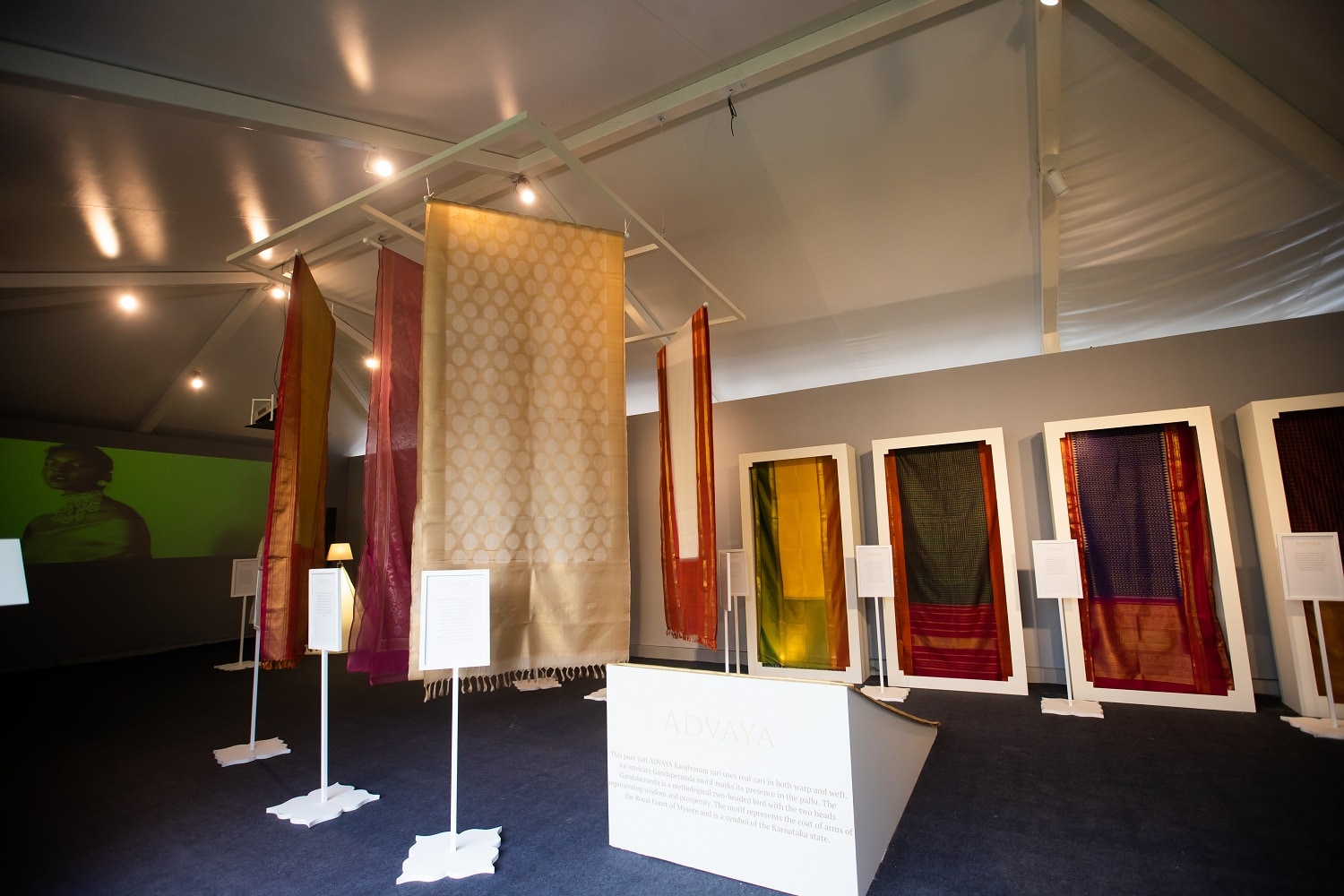 Angadi Heritage is a play in a design oxymoron – epoxy gold glinting surfaces, decorative and painted ceilings and opulent chandeliers that drop-down several floors are quietly juxtaposed with antique wood door carvings and sculptural installations drawn from the Chettinad and Dravidian traditions

Since then, he has broken several design barriers with unique Jamdanis woven in Bengal, Kota and Ikat, which he used for limited edition menswear at the exhibit, and Kantha. “The Kotas are very different conceptually,” he says, “and because of the way they are woven, their beauty of is a true luxury. The process requires the shuttle to be stopped at regular intervals at many locations and insert the weft for at least 20,000 times in a single sari. It takes a month or two of constant work to complete one sari and is very labour intensive. We have to retain the character of the fabric the construction even as we contemporise it,” he says about his other innovation.

Despite such groundbreaking innovations, Radharaman calls himself a traditionalist at heart. “I am a nonconformist but I love the traditional colours, motifs and patterns. Over 100 years, we have played within a narrow set of rules. However, the interlacing of waft and weft allows for so many permutations and combinations, that what one can do is infinite.”

Radharaman, who works with Italian designers to create and construct new weaves, fabrics, prints and patterns, rues that a kind of industrialisation has taken over fashion. “India is one of the few countries which still use handmade techniques. I have worked very closely with famous Italian luxury designers market and find that the entire process is industrial. In India, we do everything by hand. We don't perceive it as a luxury, yet we are sitting on top of a treasure trove.”