How the Gahilote Sisters are lighting sparks of joy through storytelling

Updated : December 20, 2019 06:52 PM IST
Every year since 2010, Rachna organises the Ghummakkad Narain - Travelling Literature Festival, under the aegis of UNESCO.
Another festival that the sisters have organised annually since 2010 is Kathakar, India’s only oral storytelling festival.
The second sister, Prarthana has conceptualised, directed and filmed the CoHear digital concerts of her husband, celebrated singer and musician Mohit Chauhan.

If ever a publishing house or media outlet needs a reference for litterateurs or bibliophiles, the names of the three Gahilote sisters surely follows. Rachna Gahilote Bisht, Prarthana Gahilote and Shaguna Gahilote were born and brought up among the "old trees, green hedges and grey heads" of 1980s Dehradun, a small town with numerous government institutions, a place of well-read and well-cultured people.

Through their childhood, they grew up with a generous supply of books and stories, attended numerous poetry sessions with their parents and had a number of well-known writers visiting their home. Given that they were introduced to books by their father, a well-known writer who brought light into the lives of 10 million visually impaired persons in the country by providing them books which till then were not available in Braille, it is not surprising that the siblings spent the rest of their lives bringing the same light of books to countless more souls. "As children, we read storybooks, comics, books on mythology, historical figures, reformers and English and Hindi literature. We know each other's strengths and use it to our advantage," says the eldest sister, Rachna, who over the past two decades, has won a string of awards for her work with women and children in various national and international organisations, including the National Commission for Women, The World Bank and UN Women. The Rashtra Gaurav Samman was also conferred to Rachna in recognition for upholding the rights of women and service to humanity on World Women's Rights Protection Day.

Every year since 2010, Rachna organises the Ghummakkad Narain - Travelling Literature Festival, under the aegis of UNESCO, the aim of which is to promote reading among schoolchildren across India. The festival has taken over 100 writers, storytellers and illustrators to schools across the country and reached out to more than one lakh people. Over the years, the festival has also donated over one lakh books to set up libraries in schools. 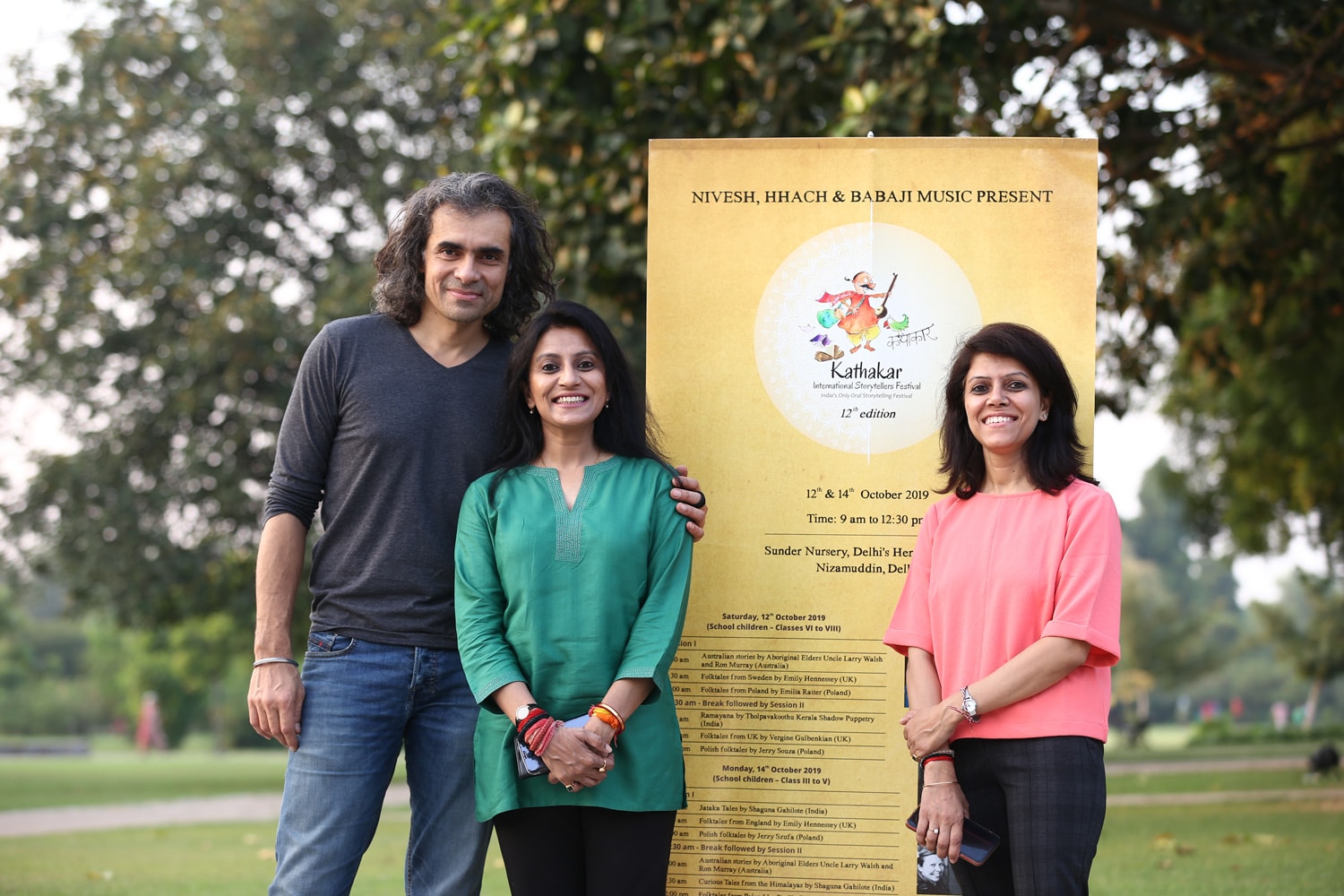 Prarthana and Shaguna Gahilote with filmmaker Imtiaz Ali at Kathakar.

"It's really fulfilling when teachers tell us that the books we donated were finished by the children within a month, and they used alternative means to get more books and also asked the administration to provide them with a budget for more books. The small spark that we ignited seems to grow into a fire," says Rachna with a glint in her eyes.

Another festival that the sisters have organised annually since 2010 is Kathakar, India’s only oral storytelling festival. Each year, the festival attracts over 3,000 schoolchildren and a similar number of adults. Kathakar is a platform for dying art forms such as Ladakh's Kesar saga, Uttar Pradesh's Swang, and Madhya Pradesh's Allah-Uddal among others. Since some of the artists are the last in their generation to be performing the art form, the festival also documents art forms from around the world as a reference for future generations. Interactions are also organised between Indian and international artists so that each can learn from the other to help preserve the platforms.

Some of the rarest international art forms have been curated at Kathakar, such as Spice Authur 702 from Japan, a Kamishibai group that uses pictures to tell stories; an Italian dying art form called Pulcinella puppetry by Bruno Leone; and Guyana-origin artist Godfrey Duncan who has been instrumental in reviving storytelling in the UK. The festival has also had participation from the likes of Sadhguru, Vishal Bhardwaj, Imitaz Ali, Manoj Bajpayee and Pankaj Tripathi. "Seeing a smile on the faces of both the young and the old gives us joy and belief that it is worth all the effort put together to organise it," adds Rachna.

The second sister, Prarthana has conceptualised, directed and filmed the CoHear digital concerts of her husband, celebrated singer and musician Mohit Chauhan. The first of its kind to find space on the digital medium, the concerts gave fans the opportunity to carry a bit of the musician live in their pockets wherever they went. Prarthana has also written, directed and shot documentaries and short films on subjects like animal welfare, environment conservation, heritage conservation, culture and travel. Excelling in Hindustani poetry, she was awarded the Rajiv Gandhi Yuva Kavi Award in 1991 while still in school. Since then, she has written anthologies of poems in both English and Hindi. "Hindustani couplets have been a way to breathe life into thoughts,” says Prarthana who has also written several lyrics for some of Mohit Chauhan's songs, many of which were included in his solo album Fitoor.

Prarthana and her younger sister Shaguna collaborated to write a collection of 11 folktales from the mountain region called Curious Tales from the Himalayas. "Folktales, as were preserved and popularised in the days of yore, have now been relegated to the backburner and this book stemmed from the need to preserve and keep in circulation these stories," says Prarthana. "It is more than just a tribute to the Himalayas that have filled my life with perpetual happiness and joy. It is actually an extension of one's love and life. The mountains, and particularly, the Himalayas have been the single most inspiring presence in my life and this book is a slice of just that," she says.

According to Prarthana, writing is a lonely job, an assignment is done in seclusion that mentally disconnects one from the rest of the world. "When one is writing, one doesn't quite know if people will like or enjoy what you may have written. The audience doesn't exist at that time. You write for yourself," she says.

Her sisters are Prarthana’s sounding board, her inspiration, her guides and her belief. "To say that they are my support system would possibly be reducing their place in my life—my sisters complete me. They are the reason why my life is full and enriched. I live in the comfort that even if the whole world turns against me, my sisters will have my back and stand by me," she says. Rachna Gahilote with her mother.

The best thing about having sisters is that there is never the dearth of a soulmate, says Prarthana. "You can share clothes, shoes, jewellery, bags and stand-in for the other whenever needed. We never buy one piece of anything. It always has to be three," she says. Her sisters also help Prarthana find the space and support to travel for her journalism, filling in for her at home and looking after things so that she can pursue her dreams without a worry about what she may have left behind. "My sisters are also the first people I go to when looking for advice. When in trouble, they are the ones I seek help from," she adds. And what’s the other best thing about sisters? “You can fight, but every fight gets resolved and the sun never sets on anger! That kind of relationship is rare and worth cherishing."

Youngest of the three, Shaguna Gahilote is a performance oral storyteller who took to storytelling about 15 years ago. After finishing her studies in the UK, Prarthana joined INTACH and has ever since been involved with preserving folk art forms while at UNESCO and the British Council. Her technique – pure storytelling – stems from the style of grandma’s folktales. “I only add a bit of voice modulation and some movement, and my performance solely rests on the story," she explains.

In 2011 and 2012, Shaguna organised a peace workshop called Peace Across Borders for school children from Pakistan, India and Bangladesh. "The new generation has no knowledge of the roots that the three countries share with each other and have only grown up hearing stories in the news," she explains. By bringing together the children, the special initiative got them to learn about their common histories and cultures in order to understand each other.

"When you see one child in the audience completely involved with your story, laughing and clapping at the crucial points, you know the story has been conveyed and that it shall live with this person for the rest of his life."

Needless to say, her sisters are her world. "The bond cannot be explained. It is a mix of being a sibling and a friend, one you can confide in, one with whom you can be brutally frank and still have her covering your back and be there with you through thick and thin. I really feel for those who lack a sister.”