On the eve of the momentous Christie’s auction of the Al Thani collection of jewels titled ‘Maharajas and Mughal Magnificence’, I made a trip to New York to catch a final glimpse of the pieces before they were dispersed, each making its way to a new home in different parts of the world.

An interesting observation that I made here while looking at the pieces was that though one considers jewellery to be mostly a woman’s prerogative in today’s time, more than 85 per cent of the jewellery in the exhibit belonged to and was worn by men.

I was intrigued by a magnificent turban ornament whose provenance stated that it belonged to the Maharaja of Nawanagar (present day Jamnagar, Gujarat). Since I am from Gujarat myself, I delved deeper into the Nawanagar jewels to know more. 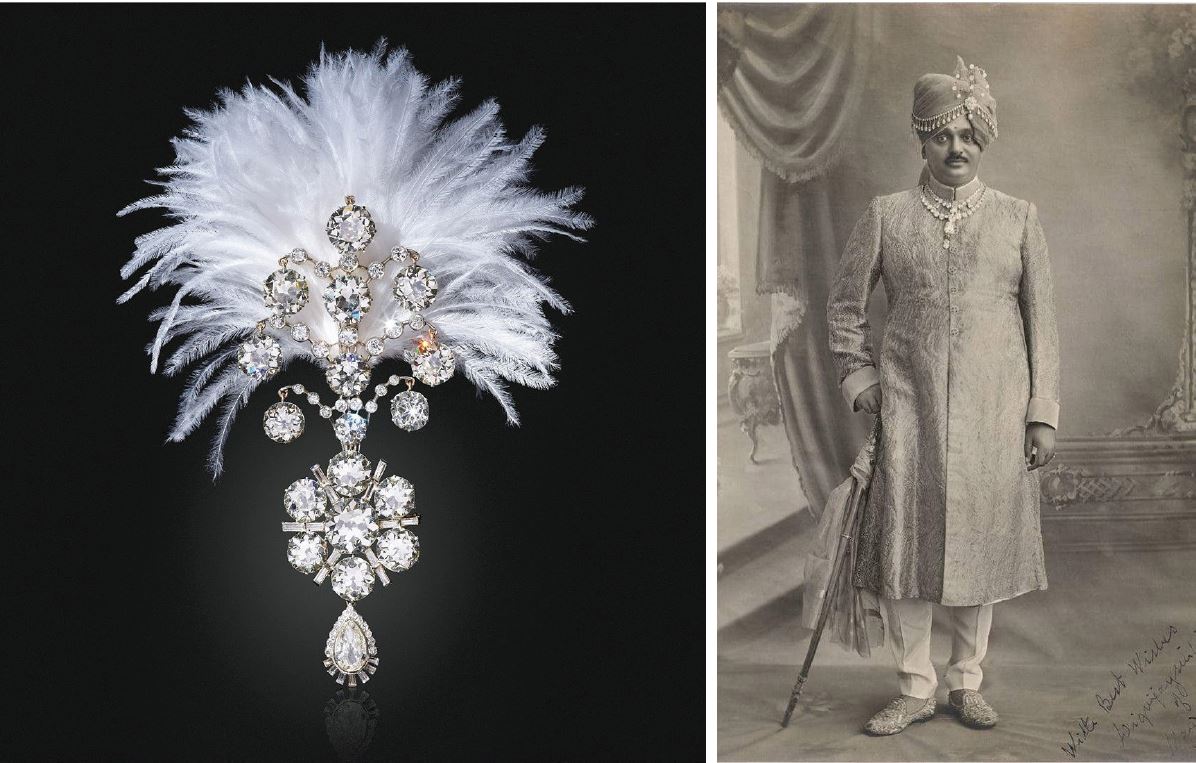 Turban ornament (jigha, left) made by Cartier for the Maharaja Sir Ranjitsinghji Jadeja of Nawanagar (right

The beginning of the 20th century saw a great deal of interest by the Indian maharajas for all things European, particularly jewellery. It also coincided with the visit of the famed jeweller Jacques Cartier to India. I stumbled upon a range of rare jewels that were commissioned by Maharaja Sir Ranjitsinhji Vibhaji Jadeja and Maharaja Digvijaysinhji Jadeja of Nawanagar with Cartier.

The princely state of Nawanagar was ruled by the Jadeja dynasty before Ranjitsinhji came to the throne in 1907. By then, he was a noted cricketer who had played for the English cricket team, Cambridge University and the county of Sussex. In fact, the Ranji Trophy, India’s first-class cricket tournament that has been the breeding ground for scores of international greats, was named in his honour later.

Ranjitsinhji had another great passion apart from cricket: collecting rare jewels. The ‘Nawanagar Jewels’ that he accumulated were described by his close friend, Jacques Cartier, as “unsurpassed in the world, not perhaps in quantity but certainly in quality.” Cartier’s sketch of the Nawanagar necklace

The collection is considered unique even when compared with other great jewellery collections such as those of the Hyderabad, Baroda, Indore and Kapurthala royal families. One of the reasons is that the pearl fisheries around Gujarat were known to produce natural black pearls – it is no wonder that the Nawanagar royal family had a rare necklace made of these.

They also famously had an emerald necklace owned by the Ottoman Sultans, a beautiful lemon-coloured diamond known as the ‘Tiger’s eye’, and many other exquisite pieces.

Coloured diamonds – Ranji’s favourite – were a large part of his collection, including unusual shades such as pink, blue, green and black. The book Cartier by Hans Nadelhoffer speaks of a red diamond and even a brown diamond bought by the Maharaja, which would no doubt command astronomical prices today.

But the most important jewel from the Nawanagar collection is the two-line Cartier diamond necklace called the Nawanagar necklace. It had two strands of first-class white diamonds, linked on both sides by a pair of square pink diamonds. The centre pendant comprised several pink diamonds, a large 26-carat blue diamond, a 12-carat green diamond, and the famous 136-carat ‘Queen of Holland’ diamond, even larger than the 105-carat Kohinoor!

Its total carat count was around 500 carats. Jacques Cartier described it as “the finest cascade of coloured diamonds in the world” and “a superb realisation of a connoisseur’s dream”.

But the connoisseur did not live long enough to enjoy his necklace. It was his nephew and successor Sir Digvijaysinhji Jadeja (1895-1966) who actually wore the necklace several times on state occasions (lead image). He too was a lover of jewellery and further expanded the Nawanagar collection.

Sadly, the necklace no longer exists except in archival photos.

But it was resurrected to celebrity status when Warner Bros collaborated with Cartier to recreate a replica as the centre-piece in Ocean’s 8. Though the design is exactly the same, the necklace used in the movie is reduced in size by 15 to 20 percent and adjusted to Anne Hathaway’s measurements as the original dimensions were for a man. And of course, those aren’t real diamonds; zirconium oxides were used instead. The commissioned piece took 15 artisans eight weeks of high-intensity work at Cartier’s high jewellery workshop in Paris, and was named the Toussaint Necklace after Cartier’s then creative director, Jeanne Toussaint – an independent, pioneering woman who was fascinated by Indian jewellery and inspired by the splendour of the great Indian Maharajas.

It’s only fitting that the movie version of the Nawanagar necklace was worn in a women-centric film starring some of Hollywood’s greatest stars, a fun flick with high fashion and glamour!

Puja Shah is the founder of Aurus Jewels based in Ahmedabad. She is a jewellery designer trained at Fashion Institute of Technology, New York, and a history buff.