Documentary filmmaker Jyothy Karat has been at the junction of man-animal conflict and ecological justice for several years through her work.

Having spent her childhood in the Nilgiris, Jyothy Karat was dismayed to return as an adult to see what had become of the southern Indian mountain range. Thus began her journey making documentaries on sustainable development in the region, human-animal conflict and displacement of indigenous communities.

Outside of the Nilgiris, the documentary filmmaker has worked on lake desiccation, air pollution and is now working on a project about climate change. Her documentaries are regularly broadcast in China, and her work with UNESCO has been exhibited at the UN headquarters besides in Belgium, Morocco and Portugal. 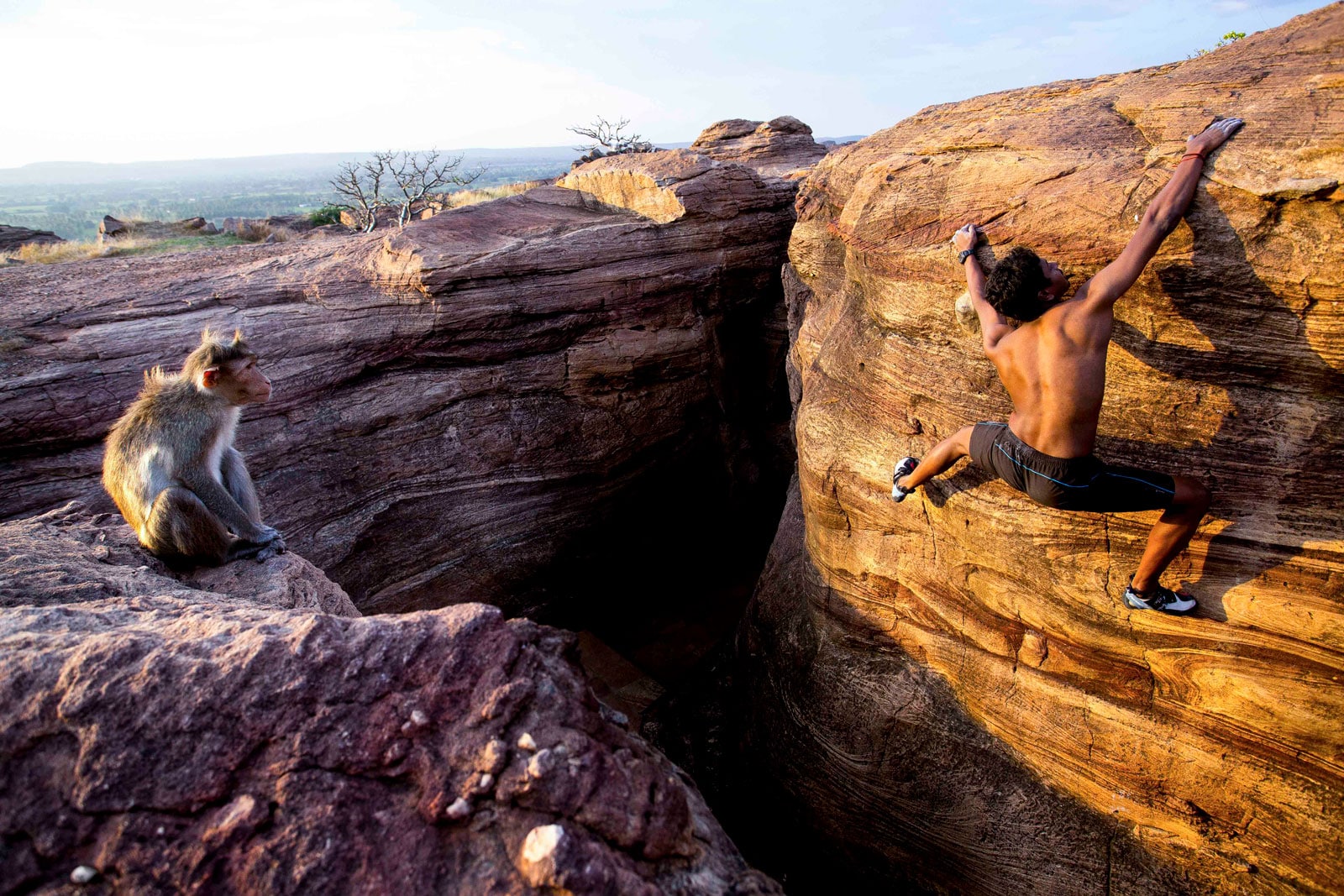 India's most decorated and accomplished climber, Praveen CM is seen bouldering in Badami, Karnataka. He holds the record of being the only man to successfully summit Mt Zambala, a treacherous mountain in Siachen Glacier.
Born and raised in Kozhikode, Kerala, Jyothy studied visual communication in Coimbatore, photography from the Light & Life Academy, Ooty and multimedia journalism from the Ateneo de Manila University, Philippines.
Recently married, she is head of media and communications for the world’s largest study on babies with brain injuries, led by researchers from Imperial College London. We speak to her about her latest projects and passions. 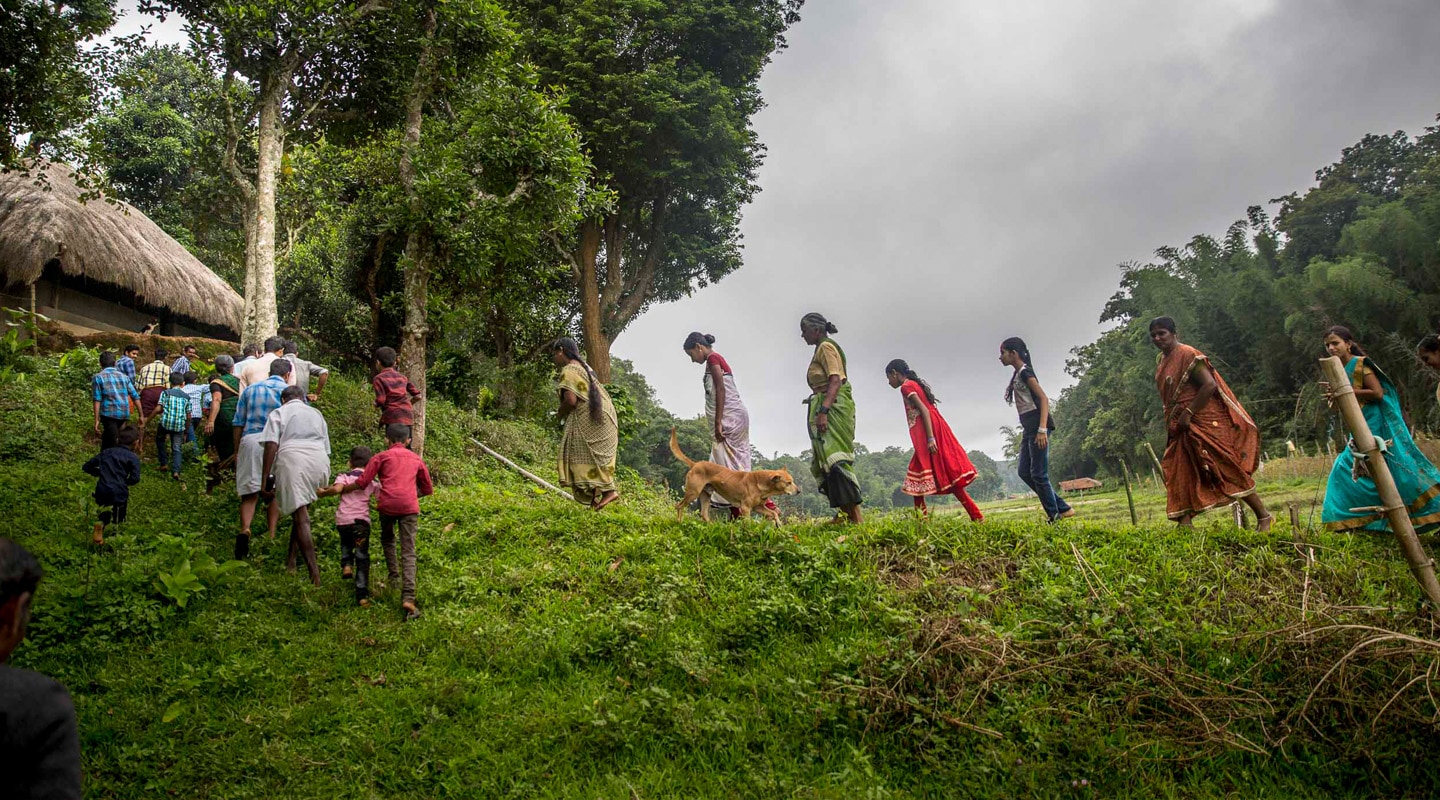 How long did it take to make your documentary on Kerala’s domesticated elephants, and what kind of support did you get from the people involved?
It took about a year and a half for research, production, and post-production. Some people were reserved, or suspicious. I was told that many had been lied to and tricked by filmmakers and animal-rights activists in the past. So they were reluctant to speak to me. But I was honest and persistent with them, clearly stating my true intentions. That paid off. This strategy has always worked for me, although it may take longer to gain access. I think they sensed that I just wanted to hear their stories and they told me. On the other hand, people intuit dishonesty and react to that almost impulsively. This has been my experience. 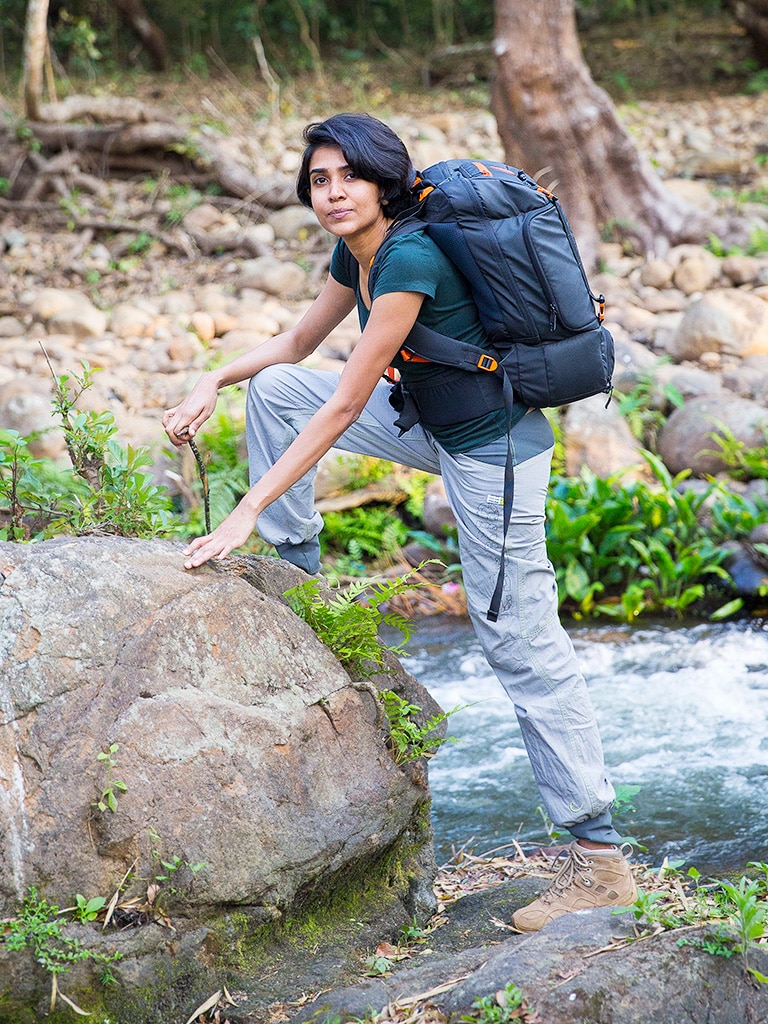 Jyothy Karat (Photo: Praveen CM)
What did you discover about the lives of Indian elephants in captivity and the wild?
There is a lot of propaganda surrounding the subject, which ultimately does not help the elephants. Half-informed skewed information and activism, even with good intentions, leads to disruptive policy changes and bad rules that are actually harmful to the existing elephants. I believe to craft effective policy to conserve, protect and nurture wild elephant populations we need conservationists, biologists, anthropologists, people's representatives, policymakers and even social psychologists to be sitting at the same table.
In an ideal world, these majestic creatures should have the right habitat and optimal climate they need to roam free. Unfortunately, we don’t live in an ideal world. India is home to the largest population of Asiatic elephants, and their habitats are shrinking at an alarming rate. Elephant corridors that are critical to their survival are being destroyed, human-elephant conflicts are on the rise, and climate change is threatening their already fragmented and shrinking ecosystems. 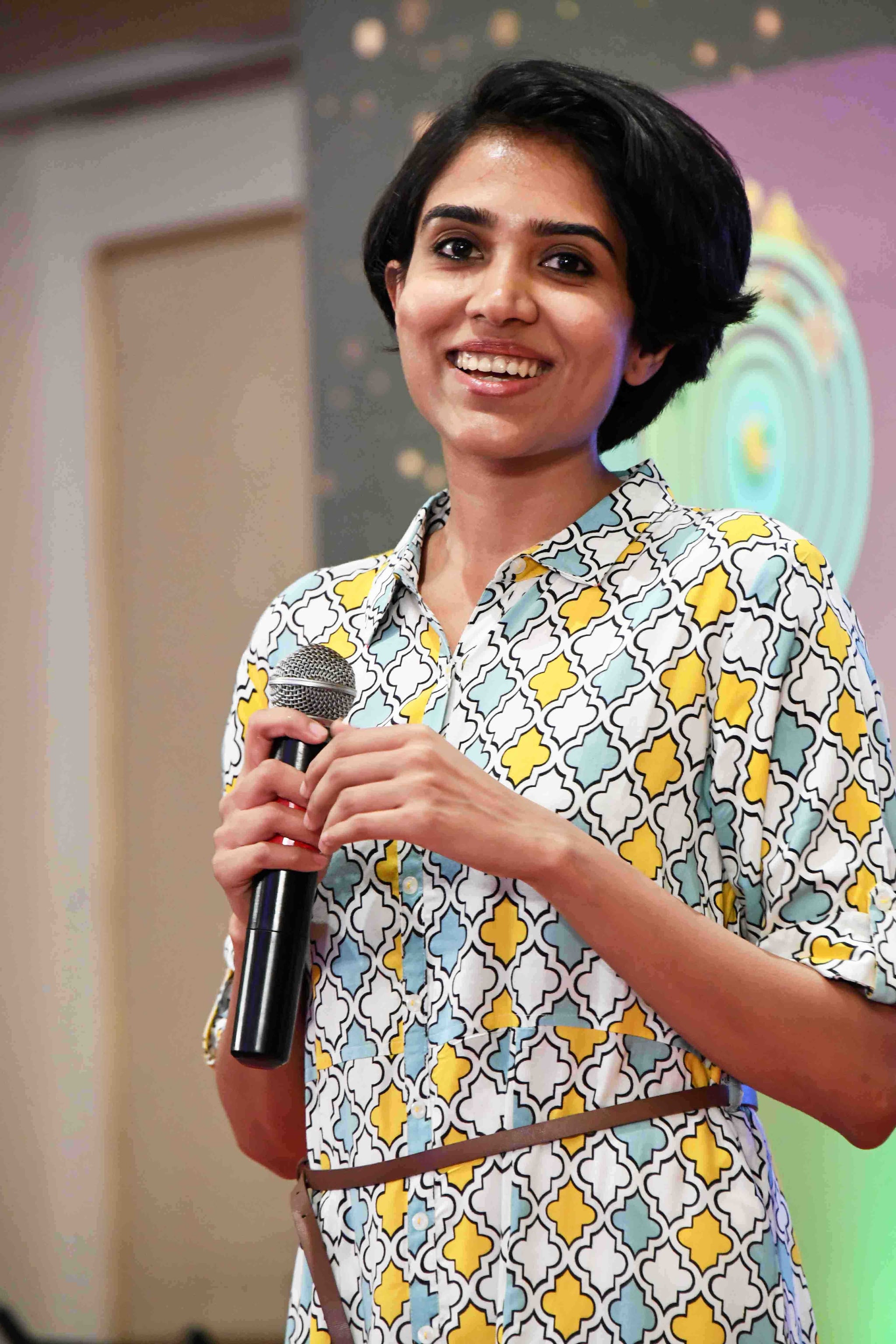 Jyothy Karat giving a talk at an event organised by Mathrubhumi in Kerala.
I feel bad to be the doomsayer, but it’s the truth. Life is difficult and is becoming harder for everybody, especially for those who live on the frontlines of climate change who are usually poor and / or marginalised. The rich and powerful don't seem to care either.
In that, I feel there’s a missed opportunity in this culture of elephants in Kerala. Here we have two very social species, interacting with each other in both positive and negative ways. What I saw in Kerala were male adult elephants trusting and responding to mahouts and other caregivers with whom they have had positive interactions. In my film Elephant Country, you will see how the elephant responds to his caregivers with sounds. Kerala is also full of stories about captive elephants exacting revenge on people who have hurt them. Now the interesting thing is that you find similar stories in the tales being told about wild elephants in the fringes of conflict with humans. I’m interested in that intersection, that commonality in both the situations (wild and captive) and how we can extrapolate lessons from one situation (captive) to learn and improve the situation in the other (wild). Elephants are social, intelligent beings wired to interact. If only, we listened!
Tell us about the other such projects you have worked on regarding the animal-human conflict and ecological justice. Which one left a deep impact on you?
My practice is ever-evolving and one learning leads to the other. The work I do and the experiences I have derived as a result have largely informed the person I have become. Projects closer to home keep me awake at nights, whether it is stories from the Nilgiris or elephants in Kerala. In propaganda-rich environments, it's hard to see clearly and derive truths. It takes time, research, funds and an immense amount of will. My hardest battle is with myself – questioning my role as a filmmaker in telling these stories that matter while making them socially relevant and engaging.
What have you noticed is the relationship between poverty and the environment? What direction is India headed?
I take a very anthropological approach in my work. So I interview a lot of people, even spend my time living with them. My observation is that modern constructs of poverty don't apply to the communities who live inside the forests if you look at them in isolation. Their social structures are so tightly knit and are so strong that all their basic needs are met. They have co-existed peacefully with the animals inside the forest for more than a thousand years. 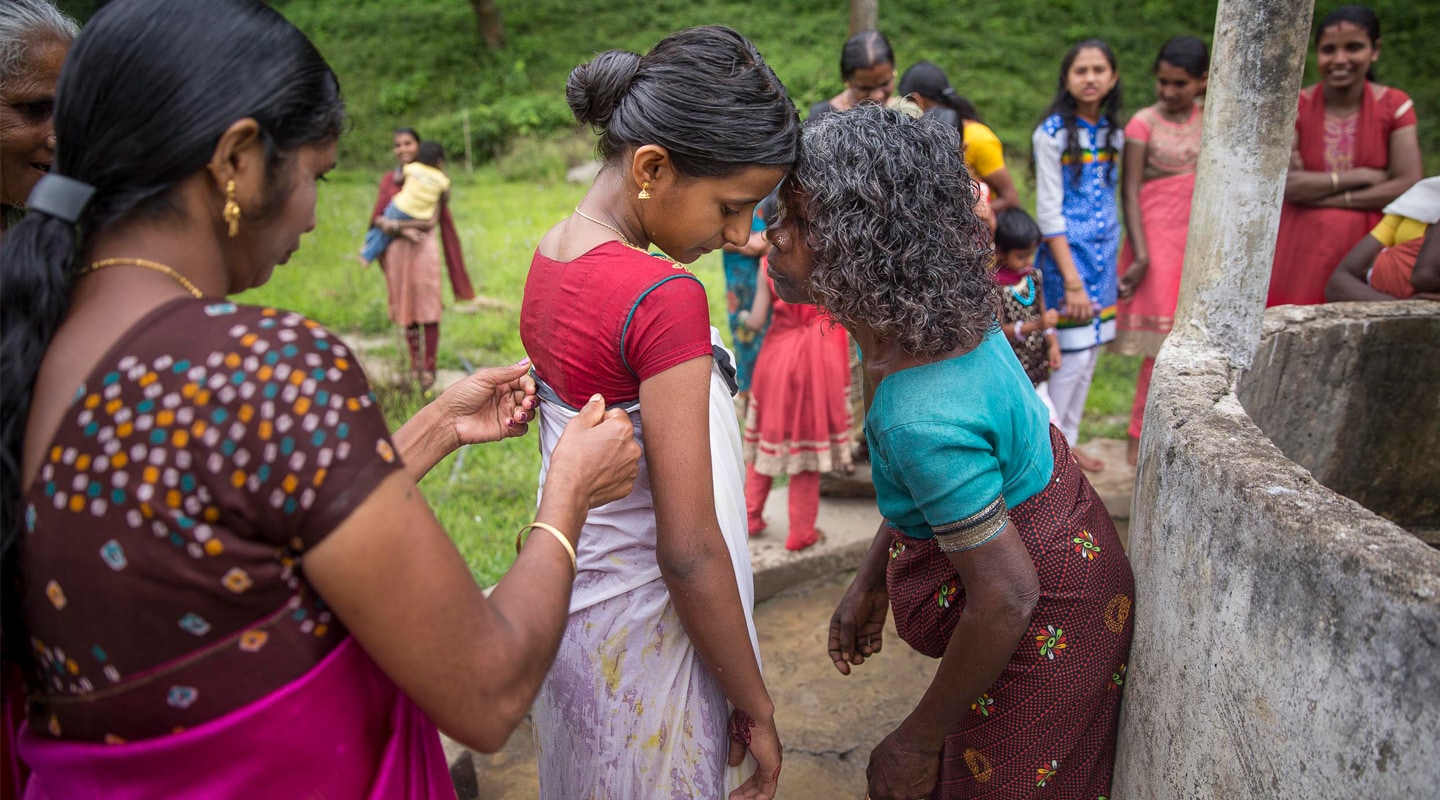 A Panniya woman whispers secrets of womanhood into the ears of 14-year-old Asha during her coming-of-age ceremony.
The poor and marginalised communities outside of the forest environments are in a very different space. They do little or nothing to degrade the environment or destroy wild habitats but suffer the most due to climate change and human-animal conflicts.
India has some good policies in place. Lack of enforcement is the problem. But I think there’s a growing sense of awareness amongst the educated young. I'm hopeful!
You’re an avid climber and adventure-junkie. How did you manage to bring together your photo-journalism with your passion?
Extreme sports including scuba diving and surfing were a result of a decade of working as a travel photographer. I’d be flown to different parts of the world and there was only one way of documenting the sport that was on offer – by learning it! So I learned as I went. Learned to swim at 25, learned to dive at 26, learned to climb at 30! All this gave me a competitive edge. Most often, I was hired to do specific stories about specific adventure sports abroad simply because there was no one around who had that skill in India. Ironically, I used to be the only woman in the room too! 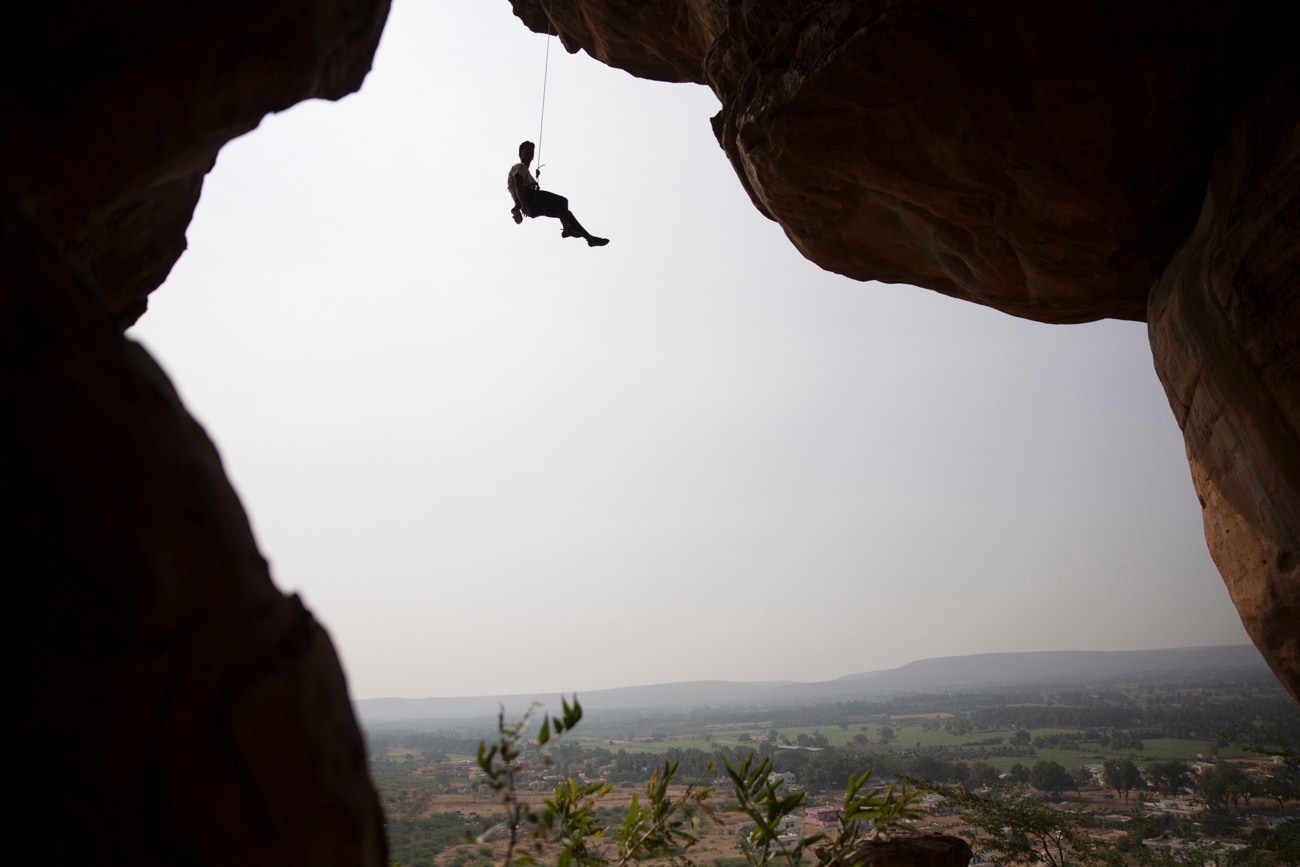 A climber seen at a famous climbing area in Badami, Karnataka.
Although skydiving and off-roading in New Zealand are pretty high in my list of memorable extreme adventure experiences, the most daredevil activity was scuba diving 100ft in a shark marine park in Fiji. Being surrounded by 30 or 40 bull sharks in open waters can put your life in sharp perspective!
What are you working on next?
I'm leaving to Leh with my team to film a story on artificial glaciers. Wish me luck!
First published in eShe magazine
Check out our in-depth Market Coverage, Business News & get real-time Stock Market Updates on CNBC-TV18. Also, Watch our channels CNBC-TV18, CNBC Awaaz and CNBC Bajar Live on-the-go!