Grover Zampa: The ancient art of making wine in a qvevri

Updated : July 20, 2019 12:02 AM IST
The leading wine brand introduces new-age Nomblot Egg concrete tanks and ancient Georgian qvevris, which are seeing a global renaissance, to age some batches of their experimental wines.
Grover is reclaiming its premier position in the Indian wine pantheon, introducing India to new varietals, new ways of ageing with their resultant flavours and aromas, and an entirely new definition of wine tourism.

Within the cool innards of Grover Zampa winery stand two egg-shaped concrete tanks with the label Chenin Blanc 2019 on them, looking rather incongruous amidst the towering perforated steel tanks that are fixtures at all wineries. At a little distance are a few clay amphorae or qvevris from Georgia.

Abhijit Shendage, the winemaker at Grover Zampa Vineyards, says, “At Grover Zampa, we are bringing into India ancient knowledge and some futuristic stuff too — qvevris from Georgia and egg and amphora-shaped cement tanks to mature some batches of wine. Grover is the only winery in India to experiment with such ancient methods of maturing wine, besides a few new global methods.” This puts them right on the cutting-edge, with the best of experimental wineries across the world. 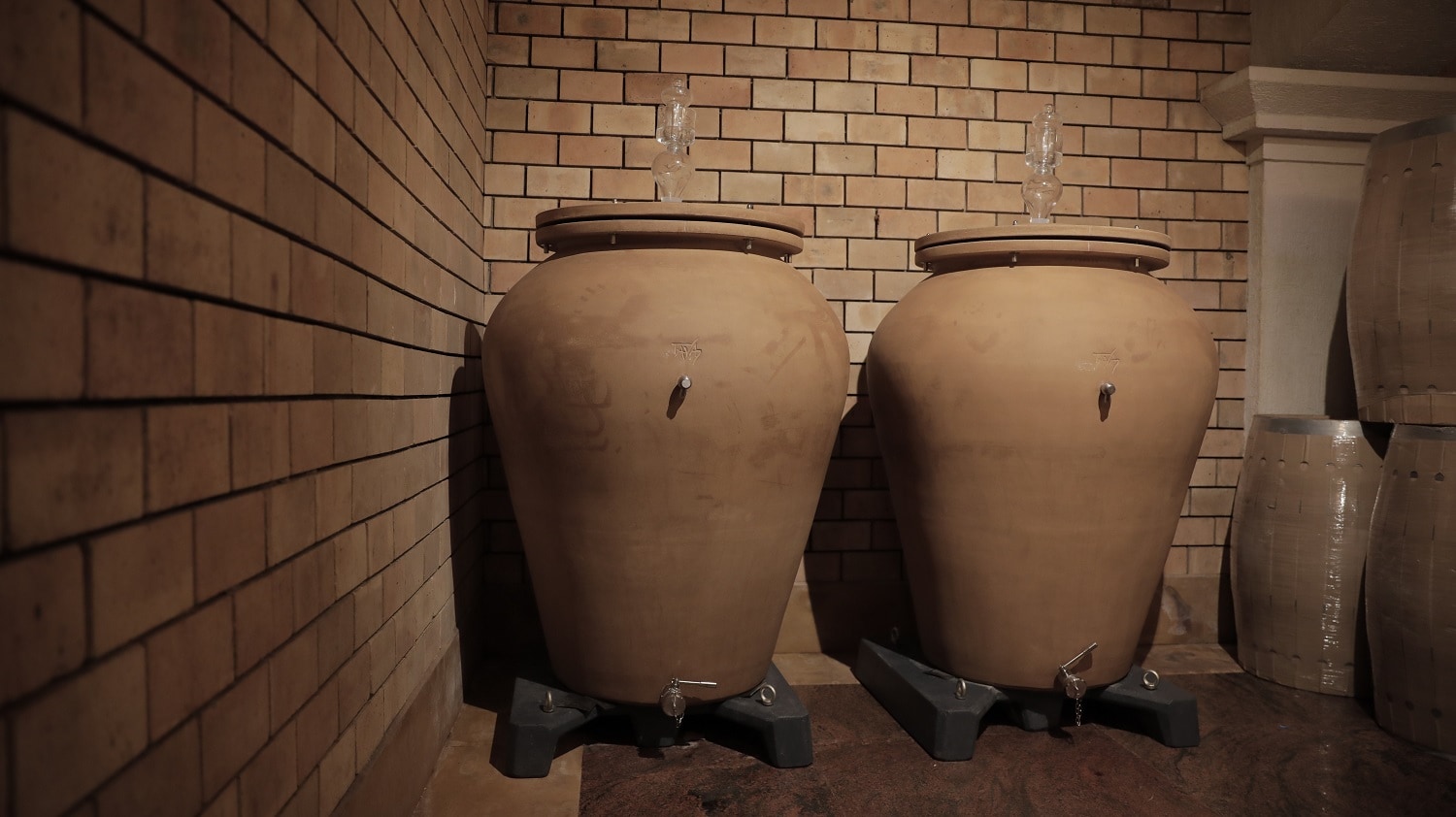 The art of making wine in a qvevri, the mighty clay amphorae from Georgia, is witnessing a renaissance. For over 8,000 years, Georgian amphora makers have been crafting clay into humungous egg-shape posts, an art that’s handed down generations. That’s how wine was made in large parts of the world, till the early 20th century nearly erased those 8,000 years, replacing ancient winemaking method with humungous steel tanks that make far more wine to meet the world demand. When the Soviet Union banned private winemaking, the Georgian winemakers (Georgia was a republic of USSR, till its breakup in 1991), installed qvevris in the basement of their homes to continue nurturing this ancient method.

Today, there is a worldwide demand for egg-shaped qvevris. “The wine is interred up to its neck to maintain a constant temperature,” says Shendage. “The egg shape, along with the temperature gradient between the inside and outside and the yeast activity, keep the juice moving around, slowly fostering flavours and textures.”  The excessive influence of the skin, seeds and stems is checked by their confinement in the vessel’s tapered bottom. “The wine is exposed to small amounts of oxygen without the contribution of flavour and tannin components from the vessel itself, as it happens with oak.”

Grover is returning to the wisdom of the ancients to achieve the truest expression of a given harvest. The clay amphorae are used to finish the Chenin Blanc, which have been aged for a while in steel tanks. The magic of amphorae is most evident in whites that remain in contact with the sediment for months, emerging enriched and smoother, absorbing the aromas that evoke flavours and scents of fruits, honey, jasmine and floral notes. 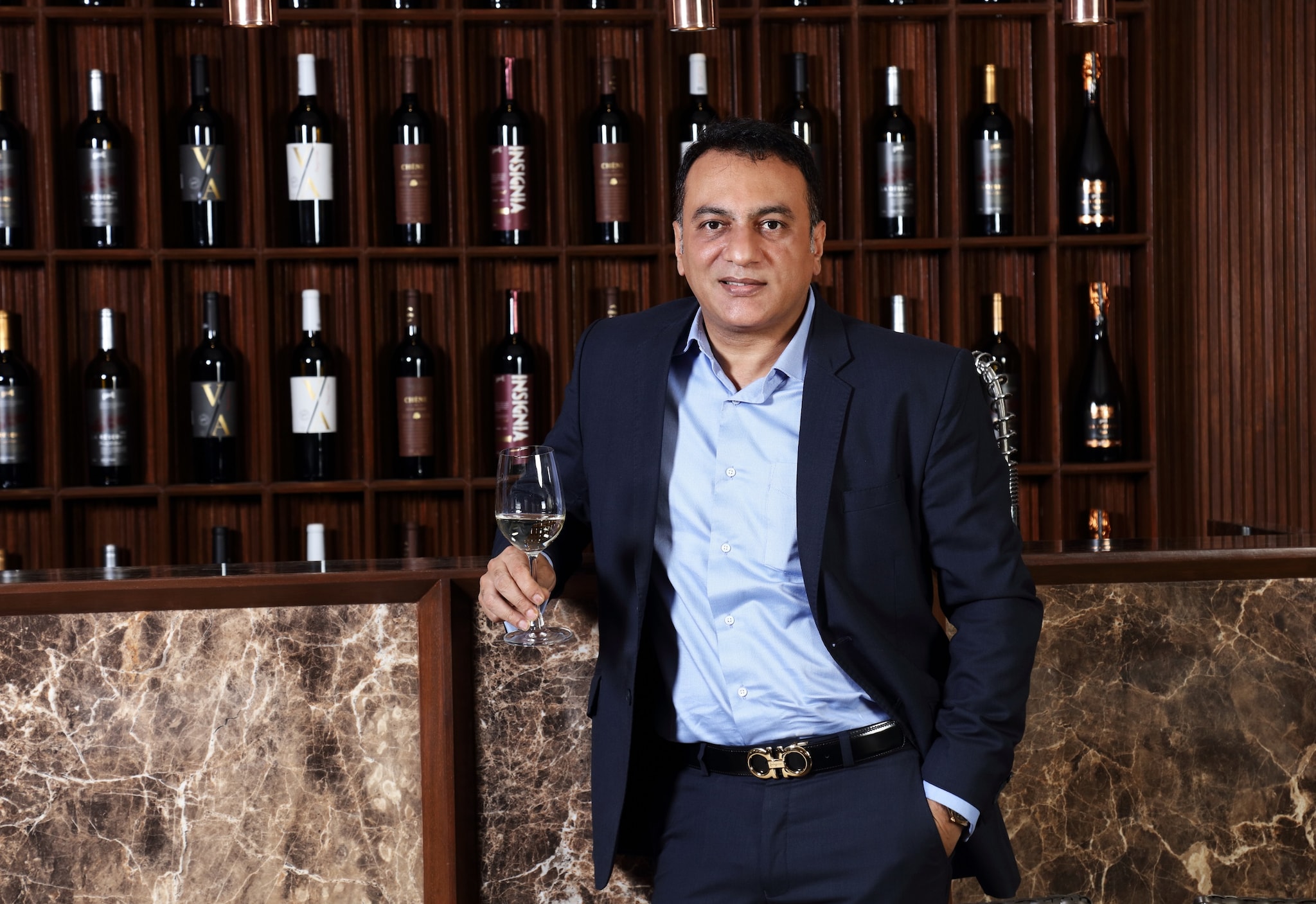 Grover is also among a select group of winemakers who mature wines in egg-shaped concrete tanks, the modern-day version of the ancient qvevri. Known as the Nomblot Egg, it was created in 2001 by French vatmaker Marc Nomblot on a whimsical request by Rhône winemaking brand, Michel Chapoutier. It was later adopted by Baux-de-Provence, a progressive appellation where nearly all vines are farmed organically and other winemakers globally. Grover introduced it in India just a few months ago. “Ageing in oak can produce woody, toasty aromas that may not always be needed. In stainless steel, the wine may be deprived of the bouquet and tannin-ameliorating effects of measured oxygen exposure,” says Shengde. “The egg-shaped concrete amphorae allow for natural oxygenation without the oakiness. The affable winemaker says, “For Grover, this is a new era of experimentation.”

Grover Zampa, set by late Kanwal Grover in the 1960s (then known as Grover Vineyards), has always been considered one of India’s finest winemakers. The family may no longer be that involved with the winemaking business – In 2012, Grover Vineyards merged with Nashik-based Vallee de Vin to form Grover Zampa Vineyards, the third-largest Indian vintner; in 2014, Singapore-based Ravi Vishwanathan’s Visvere Capital acquired about 30 per cent in Nashik Vintners (owners of Sula Wines) along with Anil Ambani-owned Reliance Capital.

Yet, the spirit of adventurism fostered by Kanwal Grover continues. The winemakers were the first in the country to cultivate the temperamental Viognier, a full-bodied white wine grape variety that originated in southern France and is loved for its beautiful notes of peach and tangerine.  The brand is also experimenting with a few Spanish, Italian and French grapes, besides a Georgian varietal called Saperavi and their first Riesling, which may be released around Diwali.

Their experimentation has also taken them towards novel grape varietals. “The larger vision is to build an all-encompassing range, with a bottle of wine each for the novice, aficionado and connoisseur alike,” says CEO Vivek Chandramohan. “We are expanding into a multi-brand lifestyle label, with wine at the core of our business. We are looking at widening our portfolio and offering more varietals that resonate with the millennials and new-age wine drinkers.” Besides, drones monitor vast expanses of the vineyards to help early identification of diseases, besides check for different parameters.

Of expansion plans and wine tourism

At the lush Nandi Hills, the old winery has been retrofitted with new state-of-the-art machines, new methods of maturation, and foudres or huge wooden vats that can hold up to 5000 litres and more. These gigantic barrels are typical of the Jura region and help ensure a better ratio of wooden surface to volume. 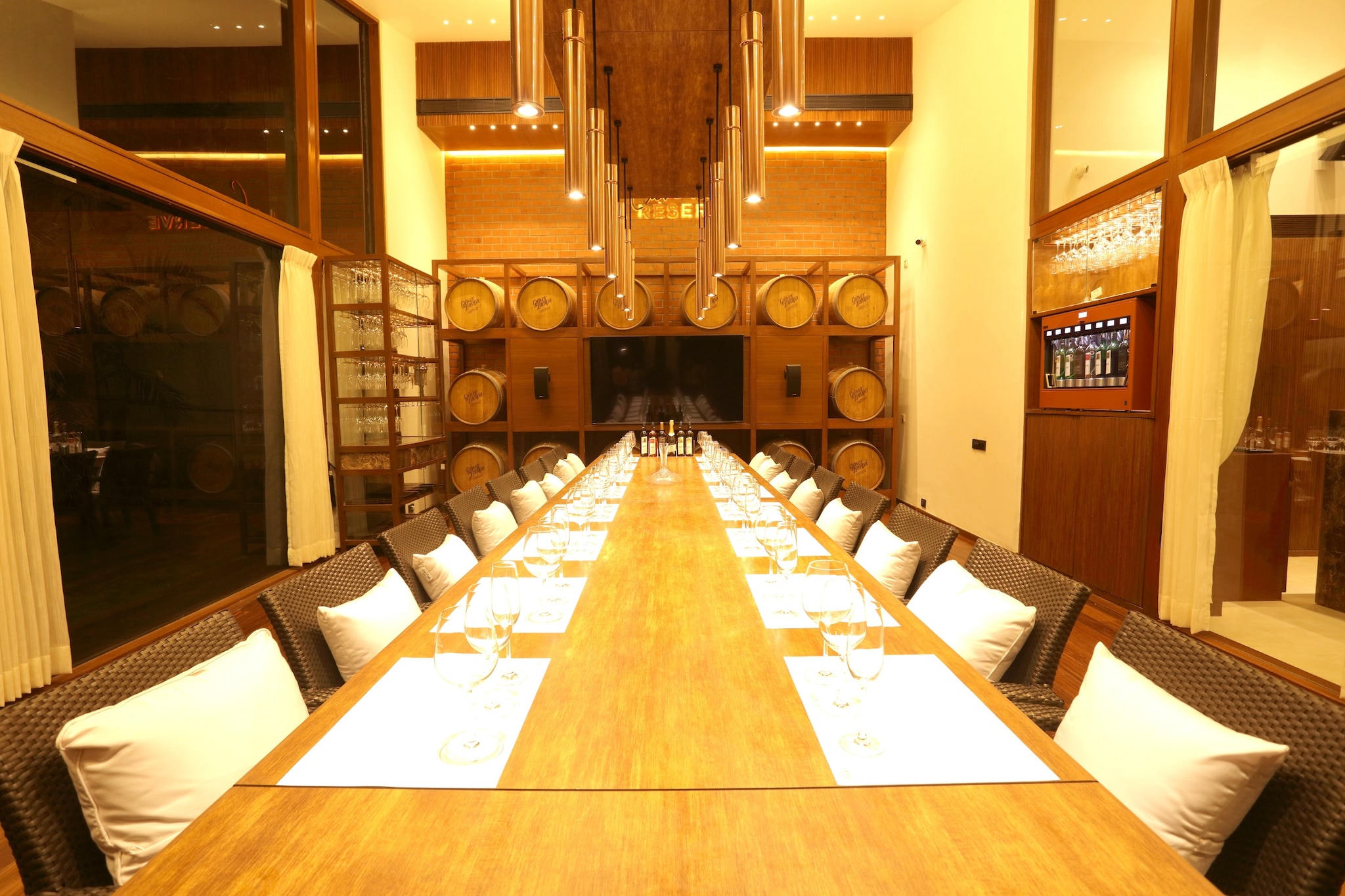 An element of wine tourism has been added to the sprawling Nandi Hills complex. From Grover’s ‘Lounge de La Reserve’, the landscape is of the rocky outcrop of Nandi Hills in the backdrop and the Koi fish pond. The first step towards its wine tourism goals, the restaurant provides piquant wine pairings and hosts sit-down meals and tastings. Within the vineyards is another space for special tastings and master classes, called ‘Cave the La Reserve’. At the ‘Boutique the La Reserve’, guests can buy any of the Grover wines, including their limited editions which are available only at the cellar.

“Grover winemakers will be launching 15 to 20 new limited edition wines, which will come from specific plots in the vineyards. These will be sold exclusively in the winery shop or served in its restaurants,” says Shengde. After its strategic investment in Château d’Etroyes this year, Grover will begin importing burgundies made there, under the La Reserve de Bourgogne (Chardonnay and Pinot Noir) label. And in January 2019, the brand bought over the Four Seasons winery and the Charosa winery estates in Maharashtra. It is constructing wine tourism projects at Four Season’s Pune land, with a 15 lac litre capacity spread over 50 acres, and access to another 200 acres, as well as at Charosa winery’s Nashik facility, with 10 lac litres capacity and a land bank of 230 acres.

The second-largest wine producer in India (the first happens to be Sula), Grover plans new investments to the tune of Rs 200 crore. The brand also hopes to enter the ready to drink (RTD) market, but more about that later: they aren’t revealing their plans just yet. "Indian wines have grown on an average of around 15% year on year in the last ten years. Although the base still remains small, we can expect double-digit growth as people become more aware of wines and travel more,” Chandramohan says at the sidelines of experience centre launch. “New product launches/introductions are tailor-made to cater to evolving consumer tastes and preferences. “

Grover is reclaiming its premier position in the Indian wine pantheon, introducing India to new varietals, new ways of ageing with their resultant flavours and aromas, and an entirely new definition of wine tourism.