GoT Season 8 Premier: Are you all set for the Long Night?

Updated : April 13, 2019 09:43 PM IST
In an interview with Entertainment Weekly, Maisie Williams who plays Arya Stark in the series said, “After reading the scripts I went back and watched season one again because so much of it refers back to that season.”
The season will also see the biggest battle of the series. Even bigger than the Battle of the Bastards, said Kit Harrington who plays Jon Snow in the series, in an interview with Jimmy Fallon.
HBO had announced earlier that the episodes are likely going to be 80 minutes long and the final season will have only 6 episodes in total.

"For The Night Is Dark And Full Of Terror."

The famous saying of Mellisandre is finally coming true, as "The Long Night" in the "Game of Thrones" is finally upon the Lords and Ladies of the Seven Kingdoms of Westeros in the season eight, who have now come together to fight the Army of the Dead and the White Walkers.

The Targaryens, the Starks and the Lannisters, have joined hands to kill the one true enemy. Or have they?

Back in Season 1, Eddard Stark had executed a brother of the Nights Watch for fleeing the Wall after he saw a White Walker, nobody believed him. However, the very first scenes of the first season are true and there’s no stopping them now.

In an interview with Entertainment Weekly, Maisie Williams who plays Arya Stark in the series said, “After reading the scripts I went back and watched season one again because so much of it refers back to that season.”

Season 7 was a season of homecoming, forging new alliances and reunion of sort.

In the very beginning of the series, Ned Stark said, "When winter comes, the lone wolf dies but the pack survives."

The Starks, who were scattered in the early series of the show, are now back to their home, and many of them are dead. (Remember Red Wedding and Ned Stark's execution?) 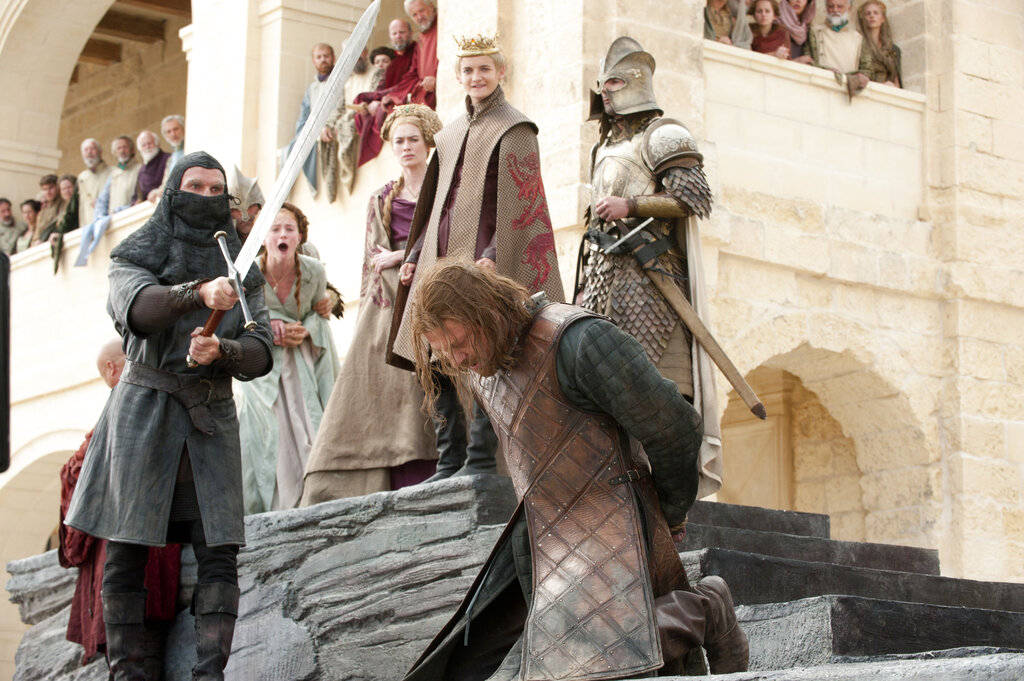 Execution of Ned Stark (played by Sean Bean) in "Game of Thrones." The final season of the popular series premieres on April 14. (HBO via AP)

We saw Arya and Bran Stark returning to Winterfell and Daenerys Stormborn heading home to Dragon Stone after having fled the country post her birth and the death of her father, The Mad King.

The last episode of the Season 7 revealed a lot of secrets which were previously not known to the audience. (Well, readers knew about it of course!)

The search for Dragon glass leads Jon Snow to the Dragon Stone where he could mine them and use as weapons for the white walkers and the Night King. He also forged a new alliance with the Dragon Queen while the high lords of Westeros came together for a truce in King’s Landing.

People in the Westeros, for the first time, have come to believe, in many years, the legends of dragons and the white walkers and they even got to see the strength and power of Daenerys’ dragons and the horror of a white in the Dragon Pit.

Who Is The Prince That Was Promised?

The King in the North, Jon Snow is not really a bastard but Daenerys' nephew, the son of Rhaegar Targaryen and Lyanna Stark, Aegon Targaryen. A new development that will unfold further in Season 8.

It will be quite exciting to see how the new development in the former Night Commander’s life will set the course of things in between him and the Mother of Dragons. As Jon Snow is the rightful heir to the Iron Throne and not Daenerys as everyone in her court claims to be. This photo provided by HBO shows Emilia Clarke as Daenerys Targaryen and Kit Harington as Jon Snow in a scene from HBO's "Game of Thrones." The final season premieres on Sunday. (Helen Sloan/Courtesy of HBO via AP)

The season will also see the biggest battle of the series. Even bigger than the Battle of the Bastards, said Kit Harrington who plays Jon Snow in the series, in an interview with Jimmy Fallon.

We finally saw the full extent of the Army of the Dead and even witnessed the death of one of Daenerys’ dragon, Viscerion, which later turned into one of Night King’s subjects, the Ice Dragon. The horrifying scenes of the army marching south after the Eastwatch getting demolished with Viscerion’s fire breath is what we all had been waiting for. At last the battle is about to commence. This image released by HBO shows Vladimir Furdik as The Night King on the season finale of "Game of Thrones." The final season premieres on Sunday. (HBO via AP)

While most of the continent is focussed on defeating Night King’s army, Cersei Lannister is still self-obsessed about her family (which now only comprises of herself and her unborn child) and conquering the Seven Kingdoms. The last time we checked she betrayed her brother (who are we kidding?) Jamie Lannister, who could have possibly joined forces with the Targaryen and Starks to honour his pledge and fight the Night King. This image released by HBO shows Lena Headey as Cersei Lannister in a scene from "Game of Thrones." The final season premiers on Sunday. (HBO via AP)

Cersei, being the driven and vengeful Lannister, has appeared to have executed her plan to hire the Golden Company from Essos, with the help of the Iron Bank and Euron Greyjoy. After burning down the Sept of Baelor, Cersei was seen as the woman who would go to extremes to get what she really wants. Maybe her plan of betraying everyone while they fight the army of the dead and she conquering the rest of the continent may actually bear some results if not all.

In the trailer and teasers released ahead of the Season premiere, David Benioff and D B Weiss, producers of the show, tried to show us what might unfold. In the crypts of Winterfell, the statues of Jon Snow, Sansa and Arya Stark indicated to the audience of the possible death of the Starks, wiping off another great family off Westeros.

After being misunderstood for many years and being accused of Joffrey Baratheon and Tywin Lannister's murder, Tyrion has finally found a place for himself as the Hand of the Queen to the Mother of Dragons. This image released by HBO shows Peter Dinklage in a scene from "Game of Thrones." Dinklage was nominated Thursday for an Emmy for outstanding supporting actor in a drama series. The 70th Emmy Awards will be held on Monday, Sept. 17. (HBO via AP)

Now a trusted adviser, it remains a mystery as to what Tyrion is planning in his head after he saw Jon Snow entering Daenerys' room aboard the ship heading to Winterfell.

An epic battle encompassing the Free Folks, Dothrakis, Unsullied, Brothers of the Night's Watch, Knights of the Westeros and the Dragons against the Night King and his army will be a sight to behold and a nail-biting too. This image released by HBO shows a scene from "Game of Thrones." The final season premieres on Sunday. (HBO via AP)

HBO had announced earlier that the episodes are likely going to be 80 minutes long and the final season will have only 6 episodes in total.

Winter is finally here and it brings the Long Night with it too.

As per the ‘tradition’ of the show (George RR Martin’s favourite thing too!), we may see a lot of our favourite characters dying in the final season. However, the pressing question of the hour still remains who will sit on the Iron Throne?

The GoT Season 8 will premiere on April 15 at 6.30 AM IST, along with the US premiere.
Tags game of thrones GoT Season 8 hbo unwind