Updated : November 01, 2019 06:08 PM IST
Cao Lau noodle variety is only found at the historic town of Hoi An in Central Vietnam.
Cao Lau takes a long time to prepare, and hence, people prefer to eat it at restaurants.

To begin with, the town of Hoi An is known for its rich heritage as a trading village. In fact, in 1999 the old town was declared a World Heritage Site by UNESCO as a well-preserved example of a Southeast Asian trading port of the 15th to 19th centuries. If you come visiting you will realise how the buildings display a blend of local and foreign influences. And this is where you will find out how along with the rich history, ‘Cao Lau noodles’ is very much a part of this town’s culture.

Apparently, in the 17th century, Dutch, Indian, Chinese and Japanese traders who came to Hoi on business and for exchange of goods would relish a steaming bowl of Cao Lau noodles while waiting for their ships to unload.

A source of pride

Cao Lau till this day is a source of pride for locals in Hoi An. They say that this unique noodle dish can be made only here.

On my trip to Hoi An, I enrolled for a guided tour with a local, named Tran Van Vu (he asked me to call him Harry) who helped me trace the roots of Cao Lau, how it is made to the final product.

So, the trip began with the extremely vivacious and energetic Harry taking me to paddy fields owned by a farming family to help us understand the source of the authentic Cao Lau noodles. Almost every field that you see in the area around Hoi An is next to the house. And such was this one. I was also joined by a small and fun group of travellers. Em Tạ Ngọc is 64 years old but he has been helping his parents make Cao Lau noodles since he was 11 years of age. Em starts working at the factory at his home at 1:00am every single morning.

After the field visit, we visited a family that has been making the Cau Lou noodles for generations. This is the Tạ Ngọc family. Here, we caught up with Em Tạ Ngọc. Today, he is 64 years old, but he has been helping his parents make Cao Lau noodles since he was 11 years of age.

He works in the factory every single day. The factory is actually a small home set-up. This man actually works 7 days a week, 364 days a year and takes only one day off and that day is the New Year Day!

And it is here where we got to know why Cao Lau can’t be made elsewhere. Em and his family determine the quantity of noodles to be made after taking the order the previous day, in advance. So every batch of noodles is made fresh and made to order. Orders are written on the wall in this fashion.

The secret lies in the water; authentic Cao Lau is prepared only with water drawn from ancient Cham wells hidden around Hoi An and Quang Nam Province. Noodles are pre-soaked in well water and lye made from wood ash brought from one of the eight Cham Islands, around 10 miles outside of Hoi An. In fact, they say that only Hoi An families with generations of noodle making hold the secret of this authentic product.

Now, coming back to the Tạ Ngọc family, Em starts working at the factory at his home at 1:00 am every morning. The process of making Cao Lau Noodle takes 4-5 hours. Em and his family determine the quantity of noodles to be made after taking the order the previous day. So every batch of noodles is made fresh and made to order. Em’s wife and children also work with him.  After some noodle has been freshly made and ready, Em’s wife takes it to the market. Cao Lau is best eaten fresh, but it can be dried under the sun, preserved and eaten for up to 6 months.

Also, they need to deliver the noodles to some of their customers early in the morning as many people in Hoi An have these for breakfast! Many locals have them for lunch or dinner as well. But, these noodles have to be eaten fresh. Hence Em and his family have to work through the night.

Cao Lau takes a long time to prepare. Hence, people prefer eating it at restaurants. In fact, even those who are the residents of Hoi An do not attempt to prepare the dish at home.

Sometimes, Em also has to deliver Cao Lau noodles to other cities in Vietnam or even overseas. In such a scenario, he has to dry them under the sun for about 2-3 days. When it gets dried completely, his wife packs them in a plastic bag and seals them. These dried Cao Lau noodles are good to be eaten anytime in the next 6 months.

But, we got to taste the fresh batch of these noodles.

To taste the authentic Cao Lau in Hoi An we decided to visit a street vendor who only serves Cao Lau with a select few other dishes. As we sat down on the bench, and it started to rain. Light, pleasant drizzle became heavy down-pour within minutes as a bowl of Cao Lau was served to us on the bench.

As a bowl of the noodles comes in front of you, you will realise the difference between Cao Lau and other noodle dishes. Cao Lau noodles are thicker than the regular ones and much chewier. In fact the noodles found in typical Vietnamese noodle dishes such as ‘pho’ are very different. We visited a street vendor who only serves Cao Lau in Hoi An.

Also, Cao Lau noodles are served with very little broth unlike ‘pho’. The broth is seasoned with basil and mint; sometimes chili peppers and a lime are provided on the side. Cao Lau should be served with salad greens and bean sprouts, although many restaurants leave these important ingredients out to save cost. Unless ordered vegetarian, like I did, thinly-sliced pork slices and deep-fried croutons are sprinkled on top to complete the dish. 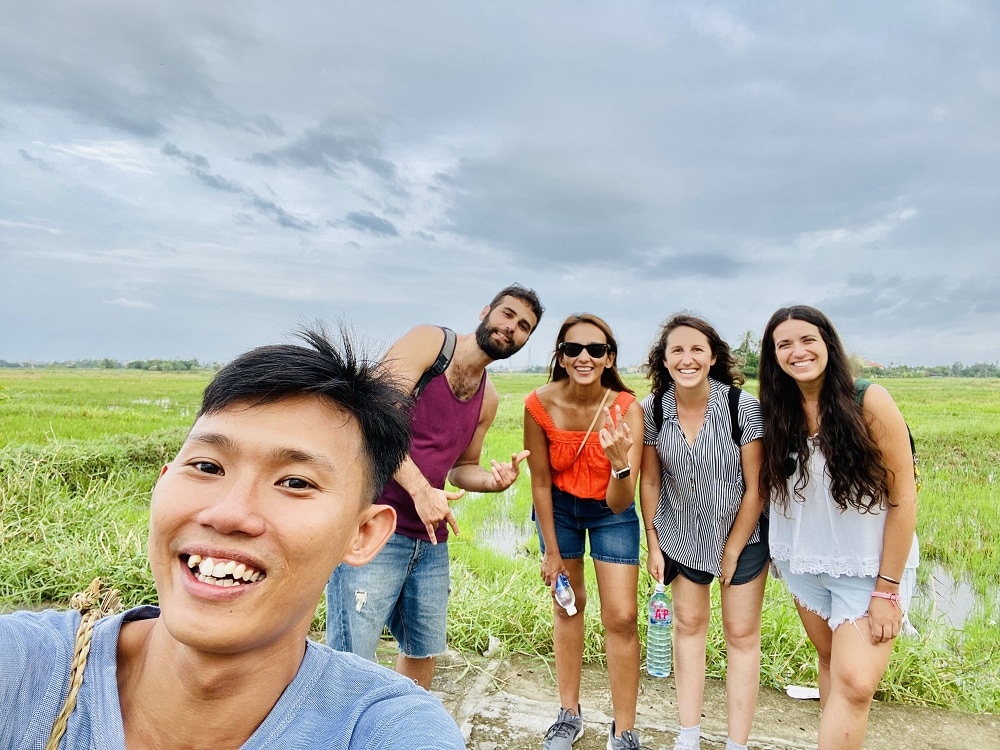 We enrolled for a guided tour with a local Tran Van Vu (he asked us to call him Harry) who helped us trace the roots of Cao Lau.
Despite the whole preparation time, a bowl of Cao Lau is in fact pretty cheap. It costs about Rs 100 – Rs 150. And the best part is that it is available from dawn to dusk at most restaurants serving it.
Tags Cao Lau Hoi An noodle dishes Tạ Ngọc family Vietnam