"Lay on a mat with knees folded and your heels should be pushed against the buttocks. That is the most satisfying opium-smoking posture. For greatest enjoyment, grab the 15cm opium pillow." Hall of Opium in Thailand’s Chiang Rai chronicles the history of opium.

In the inky glum 137 metre long tunnel, as I hastened my steps to run away from the demons stuck in the walls, Wilaiwan Soison, my Thai guide, was throwing opium ideas at me. She was not smoking nonsense. I was in the heart of the opium-producing Golden Triangle, the tip where Thailand, Myanmar and Laos meet at the confluence of Ruak and Mekong rivers. The Triangle which for long was the world’s opium hub, hence the Golden in its name - Black Gold is opium’s nickname. 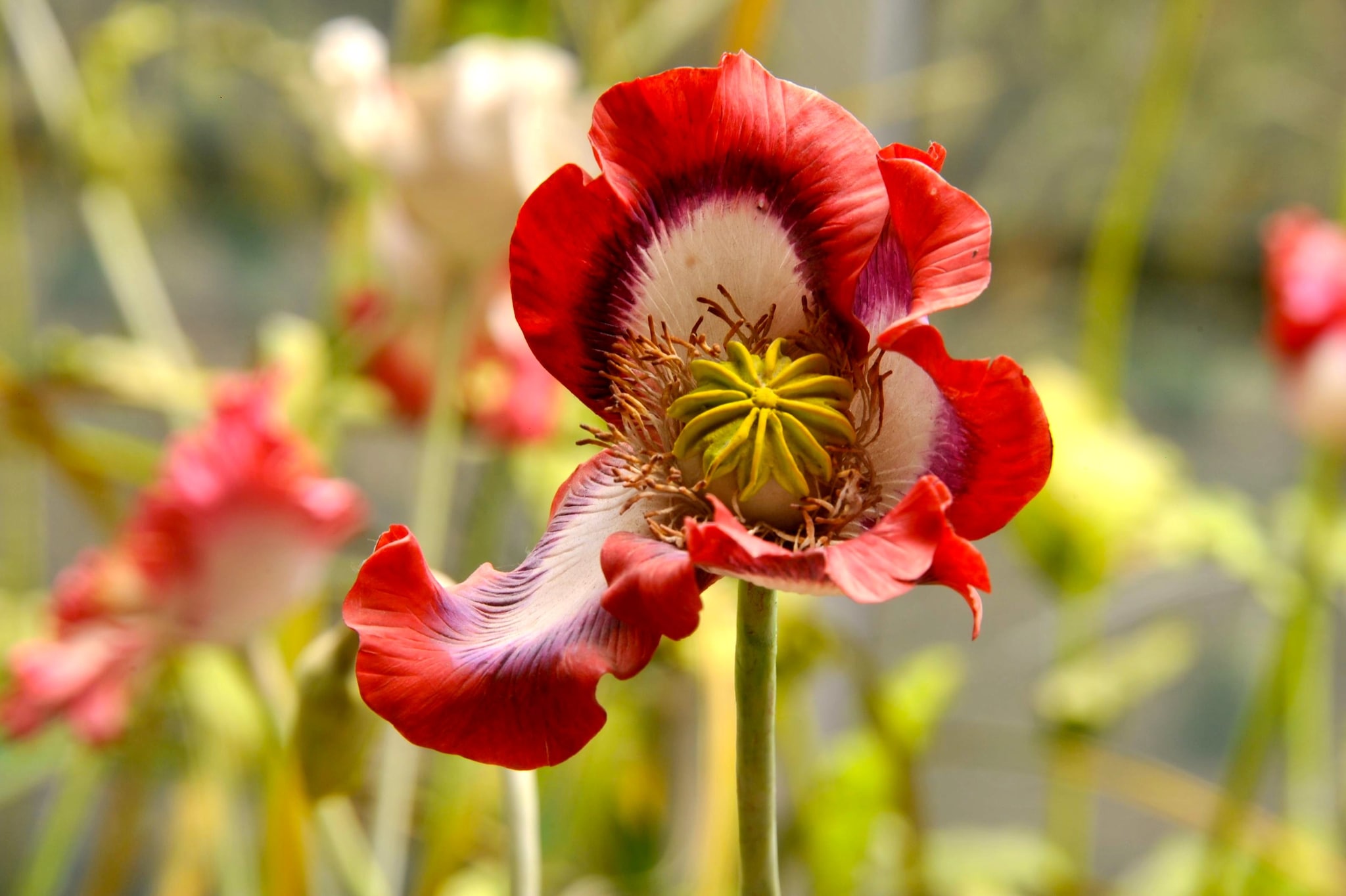 Plastic poppy flowers at the entrance of Hall of Opium.

In Chiang Rai, the northernmost tip of Thailand, Soison’s best-posture advice was a hole in my head. I do not smoke opium. Never did. Opium is illegal. My eyes were stuck on the demons with matted locks, ferocious eyes, curved talons and a silent mewl. They were opium addicts destroyed by the potent latex of the pretty poppy flower. Pods of poppy flower from which latex for opium is derived.

At the end of Hall of Opium’s dark tunnel, history was waiting. Opium has been in use since nearly 3,400 years before Christ. First cultivated by the Sumerians in lower Mesopotamia (Southwest Asia), the plant was passed on to the Assyrians who forwarded the baton to the Egyptians. In 330 BC, Alexander the Great is said to have introduced opium to the people of Persia and India. Soon, India and China became synonymous with opium. Photograph of opium weighing in Patna (Bihar) during the British rule in India.

Not surprisingly, India figures prominently in the Hall of Opium. There’s a sketch of an elephant with the story of how Moghul war elephants were fed opium to calm them down so the mahouts could control them more easily in battle. Portraits of Indian opium addicts stand nailed on white walls and in a black/white photograph from British Raj, a man with crisp toupee is busy weighing opium in Patna (Bihar). There’s a smug Queen Victoria gloating over British East India Company’s monopoly of opium and how the British greedy for Chinese silk paid not in silver coins but in chests of opium produced primarily in Bengal and Bihar. As I walked through the Hall and read through the history of Opium Wars and the world economies being driven by a seemingly innocuous latex, the demons returned in the horror stories of blood, gore and millions annihilated by the addiction. And, as if to appease the demons and wish away the evil of opium, the Hall of Opium ends in a Reflection Room that beseeches everyone to say no to opium and every other narcotic substance. Not far from the Hall of Opium is the small Opium Museum which reiterates the opium story interspersing with myths - the Akha tribe believes that the first poppy flower grew on the grave of a pretty young girl who had several suitors while the Lua tribe swears by the story of poppy rising out of the genitals of an old woman; the opium pipe was created by a red-faced god with six arms who blew three mighty breath and created three essential things for opium smoking: pipe, lamp, opium. The museum is stacked with ancient opium pipes, balance/weights used to measure opium, and ceramic pillows that were touted as ideal to “keep smoker’s head firmly soft and comfortably cool, and although they are very hard, after smoking a few pipes of opium, the smoker feels as though his head were resting on a cloud”.

As I stepped out of the Opium Museum, my head was not resting on the cloud. The evil of opium was swirling in my head and I had to see Buddha at the northernmost tip of Thailand. The Mekong river was placid and the Buddha smiled beatifically. Who needs Black Gold? Certainly, not me. The Buddha is enough.