The year 2019 concludes a decade of exceptional global heat and high-impact weather, the World Meteorological Organisation said in a statement, underscoring the delayed onset and withdrawal of Indian monsoon and devastating cyclone Fani as the year’s “high impact” events.

The year 2019 concludes a decade of exceptional global heat and high-impact weather, the World Meteorological Organisation said in a statement, underscoring the delayed onset and withdrawal of Indian monsoon and devastating cyclone Fani as the year’s “high impact” events.

The strong monsoon-maximum in 25 years-also impacted coal production and consumption in the country, where emissions are projected to rise by 1.8 percent in 2019, considerably lower than in 2018, according to the Global Carbon Budget (GCB) report.
India’s “record” hydropower performance fuelled by a strong monsoon was one of the factors driving up global carbon emissions marginally in 2019 despite a drop in the use of coal, the GCB report published by the Global Carbon Project (GCP) said.
The reports were launched at the 25th iteration of the United Nation’s Conference of Parties (COP 25) underway in Madrid, Spain where country representatives convened to work on the mechanics setting the Paris Agreement in motion in 2020. The reports emphasise “climate action now” and bat for a “sharp decline in carbon dioxide emissions.”
“Through most of 2019 it was looking as if coal use would grow globally, but weaker than expected economic performance in China and India, and a record hydropower year in India – caused by a strong monsoon – quickly changed the prospects for growth in coal use,” said Robbie Andrew, a senior researcher at the Norway-based CICERO Centre for International Climate Research, part of the GCP. Researchers said heavier rainfall led to both flooded coal mines and high hydropower generation. In addition, the Indian economy has slowed rapidly during the year.
“Carbon dioxide emissions must decline sharply if the world is to meet the ‘well below two degrees Celsius’ mark set out in the Paris Agreement, and every year with growing emissions makes that target even more difficult to reach,” said Andrew.
India, in its Intended Nationally Determined Contribution (INDC) submitted to the United Nations Framework Convention on Climate Change (UNFCCC), promised to reduce the emissions intensity of its GDP – the volume of emissions per unit of GDP – by 33-35 percent by 2030 and achieve 40 percent of its cumulative electric power from renewable power. It has agreed to create an additional carbon sink of 2.5 to 3 billion tonnes of carbon dioxide equivalent through additional forest and tree cover by 2030. 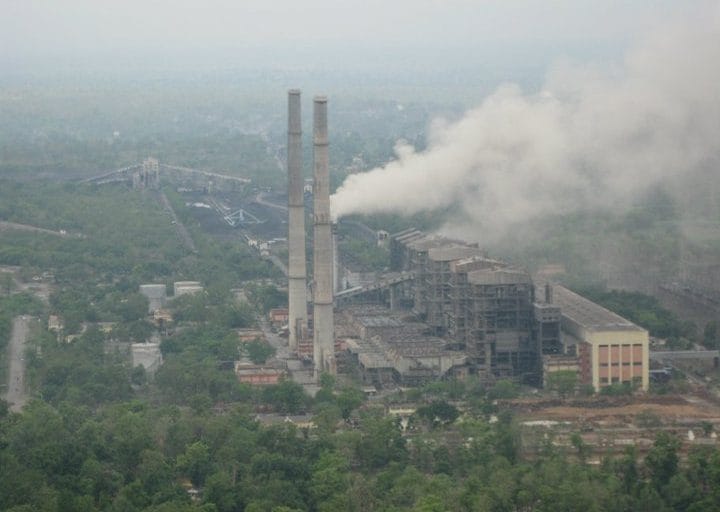 Deadline for meeting emission standards has been relaxed by five years for India’s thermal power plants, one of the major contributors to air pollution. Photo by Ashish.prajapati90/Wikimedia Commons.
For now, record atmospheric carbon dioxide levels have messed up the average global temperature in 2019.
Concentrations of carbon dioxide in the atmosphere hit a record level of 407.8 parts per million in 2018 and continued to rise in 2019. Carbon dioxide lasts in the atmosphere for centuries and the ocean for even longer, thus locking in climate change.
2019 is on course to be the second or third warmest year on record, it said, adding average temperatures for the five-year (2015-2019) and ten-year (2010-2019) periods are almost certain to be the highest on record, WMO said in a provisional statement on the State of the Global Climate.
“If we do not take urgent climate action now, then we are heading for a temperature increase of more than three degrees Celsius by the end of the century, with ever more harmful impacts on human wellbeing,” said WMO Secretary-General Petteri Taalas. “We are nowhere near on track to meet the Paris Agreement target,” he warned.
On a day-to-day basis, the impacts of climate change play out through extreme and “abnormal” weather. And, once again in 2019, weather and climate-related risks hit hard, observed Taalas.
Heatwaves and floods, which used to be “once in a century” events are becoming more regular occurrences. “Countries ranging from the Bahamas to Japan to Mozambique suffered the effect of devastating tropical cyclones. Wildfires swept through the Arctic and Australia,” said Taalas.
Strong monsoon and killer cyclones
In 2019 the onset and withdrawal of the Indian monsoon were delayed, causing a large rainfall deficit in June but an excess of precipitation in the following months.
“Over 1000 lives were reported to have been lost in various flooding episodes in India during the season. Monsoonal flooding also affected parts of southern China in June, with 83 deaths and over US$2.5 billion in economic losses reported,” the WMO statement said.
Data analysed by Mongabay-India revealed that in 2019 monsoon season, at least 1,351 people have already died in India due to floods, heavy rainfall and landslides compared to over 1,550 people in 2018.
Regular flooding occurred during the Indian summer monsoon season, particularly in western and northern India and neighbouring countries, WMO said. Overall pan-India rainfall for the summer monsoon season (June-September) was 10 percent above the 1961-2010 average, the first above-average year since 2013 and the wettest since 1994, despite a below-average June.
The late Indian southwest monsoon withdrawal is linked to the positive phase of the Indian Ocean Dipole, characterised by cooler than average sea-surface temperatures in the eastern Indian Ocean and warmer than average sea-surface temperatures in the west. The negative phase has the opposite pattern. The resulting change in the gradient of sea-surface temperature across the ocean basin affects the weather of the surrounding continents.
The director-general of the India Meteorological Department had stated to Mongabay-India that the seasonal reliability of the monsoons has been changing in the past few years. What used to be a steady combination of rains and brightness is giving way to long periods of inadequate rainfall followed by intense rain; in short – drought and floods.
In parallel to the disturbances on land, it was a “particularly extreme cyclone” season in the North Indian Ocean, the WMO report stated, highlighting the slightly above average global tropical cyclone activity in 2019 (till November 17).
Three cyclones reached maximum sustained winds of 100 knots or more, the first known instance in a single season, and the accumulated cyclone energy for the season was the highest on record by a large margin.
Extremely severe cyclonic storm Fani was the most significant cyclone to affect India since 2013, making landfall in the east of the country on the Odisha coast on May 3 with sustained winds of 100 knots, having earlier peaked at 135 knots in the Bay of Bengal. 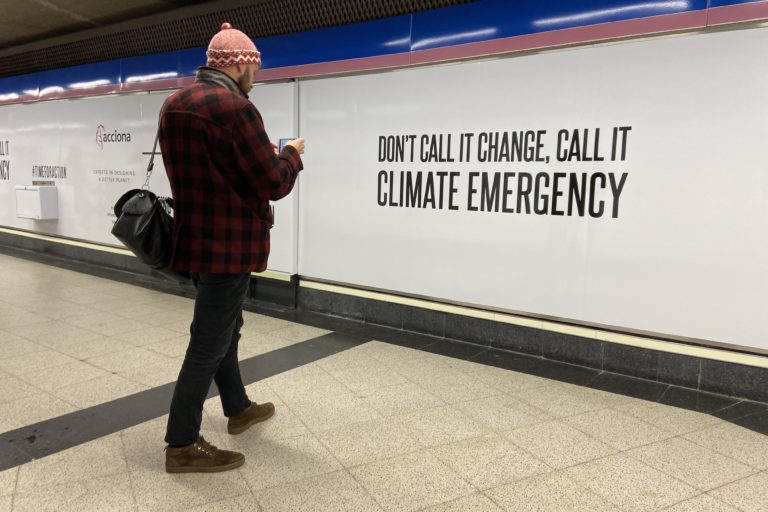 Madrid is hosting the 25th session of the Conference of the Parties (COP 25) to the UNFCCC. Photo by Kartik Chandramouli/Mongabay.
There was significant damage in coastal areas and loss of life, although extensive evacuations in affected coastal areas greatly reduced the impact. Ahead of Fani, a “record 1.2 million people in 24 hours” were evacuated to shelters before the cyclone made landfall in Odisha’s Puri.
According to an IPCC report it is likely that there will be fewer or the same number of tropical cyclones but more intense tropical cyclones (including tropical storms, hurricanes, and typhoons) in the future.
There were 14 cyclonic disturbances (depressions and cyclones) over the north Indian Ocean and adjoining land regions in 2018 against the long period average (LPA) of 12 disturbances per year, according to an Indian government report.
Of these, seven turned into tropical cyclones-against the annual average frequency of 4.5 cyclones per year in the north Indian Ocean region. The last such development of seven cyclones in a year occurred in 1985 (33 years back), it said. Private weather forecaster Skymet said it is very likely that in 2019, India may surpass the 2018 figure.
Meanwhile, the Arabian Sea too saw action. Cyclone Kyarr in October was one of the strongest cyclones on record in the Arabian Sea but did not make landfall, although associated high seas and storm surges had some coastal impacts.
Anjal Prakash, the coordinating lead author for the IPCC Special Report on the Ocean and Cryosphere in a Changing Climate (SROCC), said the WMO statement reaffirms what IPCC authors have been saying all along.
“The frequency and severity of intense cyclone events will be on the rise. The WMO has given us a little more information on the Indian monsoon,” Prakash told Mongabay-India. He also referenced a recent study that said altered rainfall patterns in many parts of the globe, including India, can be linked to the “rapid warming” of the Indo-Pacific Ocean.

As Europe reeled under two major heatwaves in late June and late July, claiming 1500 lives in France alone, record-setting high temperatures also hit health and well-being in Australia, India, and Japan.
In 2019 India stared at one of the longest heatwaves in three decades, which claimed over 200 lives, with experts warning that the spell will continue to impact people in poor urban neighbourhoods for weeks after the scorcher is over.
Madhavan Nair Rajeevan, who is the secretary of the Union Ministry of Earth Sciences, told Mongabay-India that the present episode is one of the worst heatwave spells and stressed that heatwave spells are increasing over India. A number of record high temperatures were set in India, including 48 degrees Celsius at New Delhi Airport on June 10.
Extreme heat can lead to dangerous, even deadly, health consequences, including heat stress and heatstroke. From 1992 to 2015, heat waves have resulted in 22,562 deaths across India.
Climate change potentially the greatest health threat of the 21st century
Climate change has hit human health, through the spread of vector-borne diseases and exposure to extreme weather events but most countries are not acting fully on their own plans to safeguard health from climate change impacts, the World Health Organization (WHO) said in Madrid in its ‘Health and Climate Change Survey Report’.
The report, which draws on data from 101 countries, provides the first global snapshot of progress on climate change and health.
While countries are increasingly prioritising climate change and health, with half of the countries surveyed having developed a national health and climate change strategy or plan, worryingly, only about 38 percent have finances in place to even partially implement their national strategy of plan, and fewer than 10 percent channelling resources to implement it completely.
Diarmid Campbell-Lendrum, Team Leader, Climate Change and Health, WHO, said the organisation considers climate change “potentially the greatest health threat of the 21st century.”
“All countries are facing problems in financing health mitigation. Developing countries have a problem in accessing international finance,” he said.
A small variation in climatic factors has a huge impact on vector-borne diseases such as malaria, Zika, dengue, and chikungunya. Rainfall creates breeding habitats for vectors and temperature has a major role for mosquitos, virus development, and transmission.
Recent research has pointed to the increased risk of transmission of chikungunya in India linked to a steady spike in average temperatures in the south Asian nation. The susceptible regions for the disease may shift towards non-endemic areas in India due to population movement and the availability of suitable eco-climatic conditions for the mosquito vector.
The WMO notes that changes in climatic conditions since 1950 are making it easier for the Aedes mosquito species to transmit dengue virus, increasing the risk of the occurrence of disease. In parallel, the global incidence of dengue has grown dramatically in recent decades, and about half of the world population is now at risk of infection. In 2019, the world has experienced a large increase in dengue cases, compared with the same time period in 2018.