Updated : January 15, 2020 09:32 PM IST
Yak of the high Himalayas is increasingly affected by climate change, with wider economic and social ramifications for the pastoralist societies that have thrived on yak economy.
As temperatures rise in the Arunachal Pradesh Himalayas, the traditional yak herders, Brokpas, are facing multiple challenges and adapting their herding practices to keep up.
In addition to climate change, other disturbances like political barriers have led to inbreeding among yaks of the region.

From a bird’s eye view, this animal’s extensive presence in the snow-clad alpine and the subalpine Himalayas makes the landscape look like a crumpled white sheet punctuated with shaggy black dots. It is the cornerstone of many Himalayan pastoral societies — for their livelihoods as well as their social and religious lives.

Climate scientists consider this cold-adaptive creature as the barometer of climate change, as impacts of temperature-driven changes in the climate are perceptible in it relatively immediately.

Yak (Bos grunniens) is a totemic animal of the high Himalayas, ubiquitous, pervading nearly every sphere of life in this region. But the species is increasingly affected by climate change, with wider economic and social ramifications for the pastoralist societies that have thrived on yak economy.

Perceptible changes in the climate and coping strategies

In the Arunachal Pradesh Himalayas, a yak pastoralist community known as Brokpa are facing climate woes. 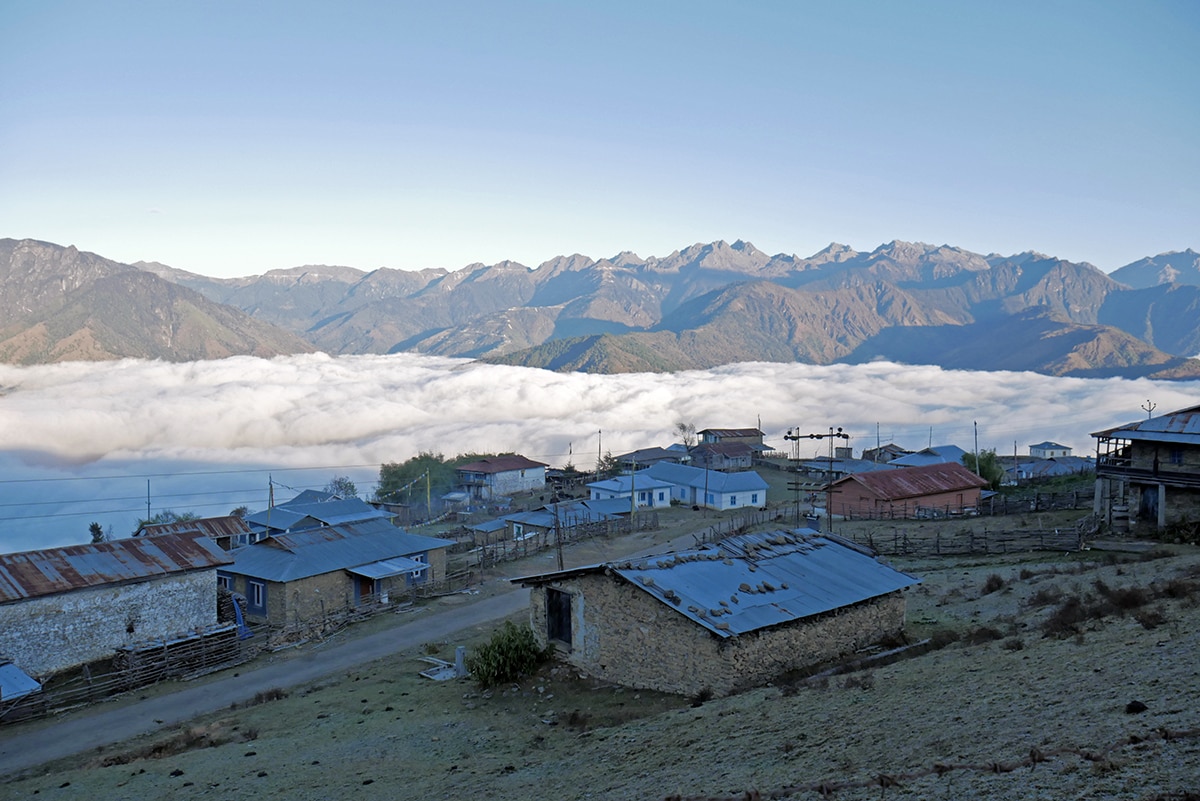 The brokpa settlement of Lubrang in the West Kameng district of Arunachal Pradesh. Photo by Sumit Das.

“Snowfall has decreased considerably in the region in the last couple of years. Two decades ago, at the time of the Losar festival, held in February, you would find the village covered in at least two-feet deep snow. But now you won’t find any snow at that time of the year,” said Brokpa Tsering, the gaonburha (village headman) of Lubrang, a yak pastoralist settlement in the West Kameng district of Arunachal Pradesh.

Another sign of rising temperature, according to Tsering, who owns about 200 yaks, is the appearance of a kind of leech that infests the landscape as soon as summer sets in. “There was no trace of these little devils until 10-12 years ago,” said the seasoned yak herder, who is now in his late fifties. “I’ve lived all my life here and had never heard of this before. But suddenly they appeared and spread all over. They mostly harm the yak calves.”

There are other perceptible signs too: with mercury soaring, an upslope proliferation of warm-climate plants like the rhododendron is leading to encroachment upon pastures on which yaks feed; and drying up of high altitude wetlands (HAW) or jheels, the only source of water for yaks and yak herders moving around mountaintop pastures, several Brokpa herders in West Kameng told Mongabay-India.

“Overall we have observed a general decline in fodder over the years, including Paisang leaves (Quercus griffithii; a kind of oak), yak’s favourite winter food. I suspect this is due to a rise in temperatures and increasingly erratic weather patterns,” Tsering said.

Scientific research supports the observations made by the yak pastoralists regarding the rise in temperature in the region.

A 2014 study published in the Indian Journal of Traditional Knowledge concluded that 78.3 percent of Brokpas in West Kameng and 85 percent of those in Tawang – that’s 81.6 percent of yak pastoralists in Arunachal – “were aware [of]…the changing climatic scenario.” The paper also documents various coping strategies adopted by the Brokpa pastoralists.

“The Brokpa yak pastoralists in Arunachal Pradesh are facing multiple challenges like temperature rise, degradation of high-altitude pastures, dwindling of the pure yak population, and a gradually shortening winter,” said Sanjit Maiti, currently a Fulbright visiting scholar at the School of Environment and Sustainability at the University of Michigan and co-author of the paper.

“The Brokpa pastoralists are responding to the changes in climate by modifying their transhumant yak herding practices,” said Maiti, who formerly worked as a scientist at National Research Centre on Yak (NRCY) in Dirang, Arunachal Pradesh. Transhumant herding is a form of pastoralism involving the seasonal movement of livestock between pastures

Brokpa climate adaptation strategies, according to Maiti, include the proliferation of yak-cattle hybridisation, migration to higher altitudes, herd diversification, changes in the migration calendar, changes in pasture utilisation practices and the rejuvenation of degraded high altitude pastures, feed supplementation, and adoption of modern healthcare.

Tsering explains how he and other pastoralists have been trying to adjust to the changes in climate by making changes in the annual migration calendar.

Like other Brokpas in Lubrang, Tsering also starts his summer hike to high altitude pastures along with his herd of yaks in April, as the snow starts to melt. His final destination is Senge, a grazing range at around 4,500 meters above sea level (masl) on the Arunachal Pradesh-Bhutan border. Tsering’s transitory life continues throughout the summer till late November when, with the onset of winter, he descends back to Lubrang. In the winter, Brokpa yak pastoralists stay in their permanent settlement area at an altitude of around 3,000 masl.

“Earlier we used to embark on the upward journey in late May or early June. But now you can’t do that,” Tsering said. “The yaks start feeling uncomfortable as early as late February because of the heat. The summer has extended and the temperature has risen.” Yaks usually live in temperatures below 10-15 degrees Celsius and can’t tolerate rising temperatures.

He says the period of migration has extended by one and a half months in recent years “because winter has shortened.”

Accustomed to very cold temperatures, the yak is able to survive up to minus 40 degrees but finds it difficult when the mercury crosses 13 degrees C. “The yak can efficiently conserve its body heat during cold weather conditions. What makes the yak more susceptible to heat stress is that it has minimal body mechanism to dissipate heat by way of sweating,” said Maiti, adding “which is why these animals need to be kept in the temperatures suitable to them.”

The erratic climate is not the only enemy the Brokpa yak herds are facing at the moment. The political restriction on movements of yaks to the ‘pure yak region’ aggravates the situation, blocking the flow of new yak germplasm to Arunachal Pradesh.

The wild ‘pure breed’ yak population, estimated at no more than 10,000 to 15,000 individuals, is now in China’s Tibetan Autonomous Region (TAR), where border control is strict and free-crossing of yaks and their herders from the outside has been restricted.

The closure of the ‘pure yak region’ in Tibet has given rise to the problem of inbreeding in the yak herds in the rest of the Himalayas.

Yaks outside the ‘pure yak region’ are “thought to be suffering from inbreeding due to the lack of availability of new yak germplasm from the original yak area during the past few decades, and the resultant practice of prolonged use of the same bull within herds,” according to a 2016 report by the International Centre for Integrated Mountain Development (ICIMOD).

The problem of inbreeding has also affected the Brokpa yak herds. The Brokpa herders in Arunachal Pradesh today are facing the fate which befell Kyrgyz and Wakhi yak herds in the 1950s after the border between Afghanistan and China in the Wakhan Corridor was closed, leaving no possibility for Wakhi and Kyrgyz herders to get new yak germplasm.

Brokpa Tseng Dorji, a former yak herder and now field staffer at the National Research Centre-Yak (NRCY) in West Kameng, says: “Younger yaks in some herds are weak and smaller in size, and also more disease-prone. This is because they’re using the same old bulls for breeding. After the closure of Tibet, the previously unhindered yak traffic was stopped. In the days of my grandfather, they used to bring pure goleng bulls (Bos taurus) from Tibet. But now there’s virtually no new yak germplasm from the pure yak region.”

A way of life under threat

In the face of these difficulties, the number of Brokpa families practicing transhumant yak rearing system has drastically plummeted, falling from 800 to around 200 families in Arunachal Pradesh.

Scientists at NRCY and some Brokpa yak pastoralists say that opting for yak-cattle hybridisation has proven an effective adaptive strategy to cope with climate change. Indeed, over the years many pastoralists have shifted to keeping hybrids as they are more heat-resistant and can better adapt to lower altitudes and rising temperatures. The most outstanding advantage of the hybrids is the fact that they thrive at the altitude interval where neither cattle nor purebred yaks do, i.e. between 3,000 and 4,000 meters. “That’s why many Brokpa herders now prefer these yak-cattle hybrids to purebred yaks,” Tsering says.

Tsering, however, says that overemphasis on hybridisation could, in fact, result in negative consequences. “For keeping dzomos (yak-cattle hybrids) you need not follow a transhumant system as you can keep it in lower altitudes. But, then, if you stop the annual migration the Brokpa has been known to practice since ages, you lose the essence of your identity. If you opt for a settled, sedentary life, you are no longer a Brokpa.” He further says he is ready to migrate to higher altitudes for his yaks’ comfort rather than opting for hybridisation.

“The biggest threat we are facing is the defection of the younger generation. They don’t want to continue the harsh traditional life of a transhumant Brokpa herder that requires one to move with yaks in higher altitudes in minus temperatures,” rues Norbu, a septuagenarian Brokpa herder from Chandar village in West Kameng who owns about 300 yaks, but has no one to look after the animals after he’s gone as all four of his sons have moved away for other occupations.

While the threat of losing their traditional way of life remains the biggest fear for Brokpa herders like Tsering, the women herders run the risk of being particularly vulnerable — in terms of losing their livelihoods and access to resources as these reclusive herders face the brunt of climate change. Traditionally there is no gendered division of labour in the Brokpa society — but the gender dynamics are changing with climate change.

As yak-rearing becomes more difficult, families are settling down as farmers, traders, and daily wage labourers, and as part of the formal monetised economy. In Lubrang, Tashi Lhamo and her husband Tashi Phuntsu used to lead the life of semi-nomadic yak herders up until the early 2000s. But as it grew difficult for them to keep following the traditional transhumant system, they decided to settle down to a sedentary life in Dirang.

When they were practicing transhumant yak pastoralism, Tashi Lhamo had equal access to resources as her husband as is the custom among the Brokpa herders. But once they settled down and integrated into the mainstream monetised economy, only Tashi Phuntsu managed to find a source of income by running some small businesses. “Now I’m a housewife devoting myself to the household chores. It’s very different from the life I used to lead as a Brokpa herder,” Tashi Lhamo says.

Even women who have taken up other work like that of construction workers, find that the pay for women and men labourers is different, a shift from their semi-nomadic pastoral life where both women and men had equal access to economic resources. And for women in Brokpa families that still continue to practice yak rearing, new challenges arise as they now need to spend more time on the high altitude pastures with yaks, where access to healthcare (maternal/reproductive) and menstrual hygiene is limited.
Tags Arunachal Pradesh climate change unwind