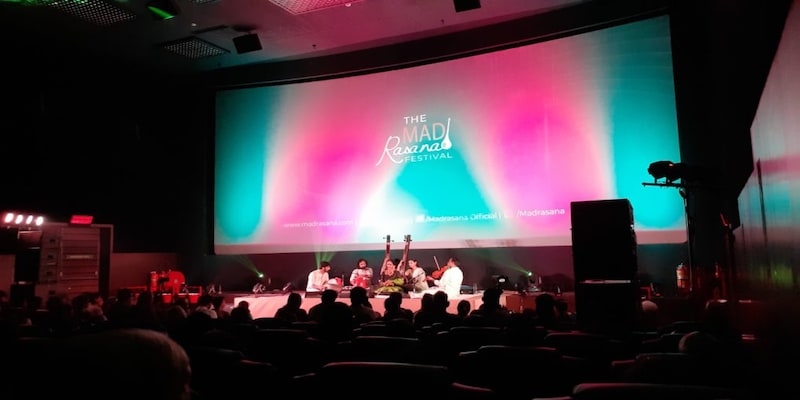 Often, a great deal of social status is attributed to an artiste on the basis of the sabha they manage to land, for their Margazhi performances.

The time is 9 am, and it’s the day after Christmas. Still sleepy after the merrymaking, wine and plum cake from the previous day, I hustle into a dimly-lit hall only to find it packed to the rafters. With every seat occupied mostly by middle-aged men and women decked in cotton kurtas and Kanjeevaram silk, a scattering of twenty-something sits cross-legged on the floor with their smartphones out and cameras open. The anticipation is palpable and cuts across ages and style statements. With no seats on offer, I lean against the wall and wait for it to begin.

The focus lights come on, and there she is. Decked in a green and black silk saree, Jayashri Ramnath (better known by her stage name, Bombay Jayashree) begins the first of her ragas. Flanked by percussionists on the Mridangam and Ghatam to her left, two Tanpura players behind her, and a violinist to her right, the Oscar-nominated Carnatic vocalist (remember, Pi’s Lullaby in Life of Pi?) begins weaving magic on her spellbound audience. It’s another day in December, and Chennai’s widely celebrated Margazhi music season is upon us.
You’d be forgiven for thinking we were at a morning concert at the Narda Gana Sabha or Chennai’s famed Music Academy. We are instead, sitting at a cinema screen at Chennai’s iconic Sathyam Cinemas, watching Jayashri and her five-member band perform at the Mad Rasana festival, with a larger-than-life cinema screen in the background. They go on to perform a composition in the Surya Raga — rather apt for a day that saw a rare Solar Eclipse — and Maiyo Maragadhamo, which as Jayashri describes, is a musical rendition from the Kamba Ramayanam, which is a Tamil re-telling of the Ramayana, written by the poet Kambar.
The Idea
For the last week, Sathyam Cinemas has played host to five top-rung Carnatic musicians who have chosen to step outside the sabha (a traditional Carnatic performance venue) and perform at the cinema. These names include the likes of Vignesh Ishwar, Sherthalai Rengatha Sharma, Jayanthi Kumaresh, Abhishek Raghuram and Bombay Jayashri. The show is free of entry for the 300-member audience.
“The idea of conducting Margazhi concerts at our cinema screens occurred to us last year when a friend recommended that we do it during the December music festival,” says Swaroop Reddy, Regional Director at PVR Cinemas (Sathyam Cinemas was owned by the SPI Group, where Swaroop was President, before PVR acquired the company and its multiplexes in 2018). “There is no commercial angle to the initiative since the event isn’t ticketed. The concerts are held in the morning when movies aren’t screened, and we hand out passes for those interested in attending,” he adds. “The objective is to open our multiplex to the performing arts, and get more young people to watch Carnatic concerts during Margazhi.”
Wanted: A New Platform
The Margazhi music season, often regarded as the most significant day in Chennai’s music calendar sees Carnatic artistes from far and wide descend on the city, and perform in various sabhas. Several decades of the tradition have seen performers, connoisseurs and audiences make the Margazhi season their own, picking and choosing from a list of several high-profile profile performance venues and performances.
Often, a great deal of social status is attributed to an artiste on the basis of the sabha they manage to land, for their Margazhi performances. “The question, however, has always remained: how do we take traditional concerts outside traditional performance venues?” says Akhila Krishnamurthy, Founder of Aalaap, a performing arts management company. She adds, “When we move a concert to a non-traditional performance venue, it removes a bit of the intimidation that such venues come with. It encourages younger and curious audiences to check out these concerts and not be intimidated by the setting.”
Akhila’s point is valid. “Sabha-hopping” as it has come to be known, often sees Carnatic connoisseurs pay critical attention to performances and even greater attention to detail when it’s even something seemingly simple as what to wear while attending these concerts. “But staging a Carnatic concert in a cinema theatre turns the equation on its head,” says Akhila, “It’s not so serious anymore. Artistes find a great platform to connect with younger, social-media-savvy audiences who are there for the novelty factor. The fact remains that while young performers have begun doing well for themselves, the average age group of audience during the Margazhi season remains much, much older. Taking concerts outside of sabhas is a step towards changing that.”
Inclusivity is the Key
Interestingly, when Akhila founded Aalaap in 2015, her company began making consumption of Carnatic music more inclusive, going so far as to stage 75 concerts in unconventional venues like yoga studios and terraces. More recently, similar initiatives like Chennai-based Motta Maadi Music have taken the concept forward by making music more inclusive through rooftop jam sessions, where audiences are encouraged to partake in performances, albeit with no restriction on the genre.
In the pursuit to get younger people to listen to Carnatic music, PVR is committed to taking the Sathyam model to other cities, as well. The multiplex is also confident of setting a precedent and is hopeful that other non-traditional performance venues will follow. “There are no plans just yet to sell tickets to these concerts — also because there is no legal framework for doing this within a cinema,” adds Swaroop. That is no doubt a good thing, for Sathyam’s cinema screens are going a long way in opening up the niche Carnatic music scene to the masses, many of whom have never attended a Margazhi concert before.
Check out our in-depth Market Coverage, Business News & get real-time Stock Market Updates on CNBC-TV18. Also, Watch our channels CNBC-TV18, CNBC Awaaz and CNBC Bajar Live on-the-go!