August 25, 1919. Aircraft Transport and Travel Limited (AT&T), a forerunner company of today’s British Airways, launched the world’s first daily international scheduled air service, between London and Paris. That first flight, which took off from Hounslow Heath, close to today’s Heathrow Airport, carrying one passenger, a consignment of leather, several braces of grouse and some jars of Devonshire cream.

1927: British Airways forerunner Imperial Airways launched premium, 18-seat Silver Wings flights, ‘a service deluxe’ departing from Croydon in London and flying to Paris. Advertising material stated that stewards ‘would point out places of interest en route, attend to the comfort of passengers and serve light refreshments from the buffet’. Mid-1930s: When Imperial Airways’ Empire Flying Boats operated the trunk routes to Africa, the Far East and Australia, the typical menu on the flying boat Corsair included Foie Gras or grapefruit, roast chicken, ox tongue and York ham with Russian or green salad, completed by peaches with Melba Sauce, Cheshire, Camembert and Kraft Cheeses offered a with a good wine list and an ‘Airways Cocktail’. Provisions were loaded on board in giant baskets. 1939: BOAC was formed from an amalgamation of Imperial Airways and the original British Airways. BOAC operated a network of services right throughout the war years to maintain the links for civil servants and urgently-required military personnel to the far-flung outposts of the British Empire. Food, such as it was, tended to be sandwiches and whatever could be packed into Thermos flasks. 1949: BOAC launched a first-class service on Boeing Stratocruiser long-haul flights. Passengers were served six-course dinners, afternoon teas, cocktails and canapés – menus for ‘invalids, infants, vegetarians etc’ and available if requested in advance. To create a celebratory atmosphere on board, complimentary cigarettes were offered upon take-off and after meals.

1953: The Rolls Royce prop-jet Vickers Viscount was introduced and ‘Silver Wing’ became the brand name for BEA’s First class service. Hot meals in round china dishes, set on trays with red and white striped tray liners, silver plated cutlery and clear plastic dishes with such items as lobster mayonnaise and a banana split for dessert were served. Petits fours and a bread roll completed the tray set. 1978: BA’s first- and business-class passengers are treated to in-flight catering inspired by the reign of Queen Elizabeth I (from 1558 to 1603). They were served dishes that were popular 400 years previously including ale and Posset, an Elizabethan drink made by mixing hot milk, spices and liquors. October 7, 1986: ‘La Brasserie’ was first introduced on night flights to Riyadh and Jeddah. A tray service, using top quality white china which included sculptured shells, crescents and cocottes. This was for late departing flights when it was not appropriate to offer a full meal service. 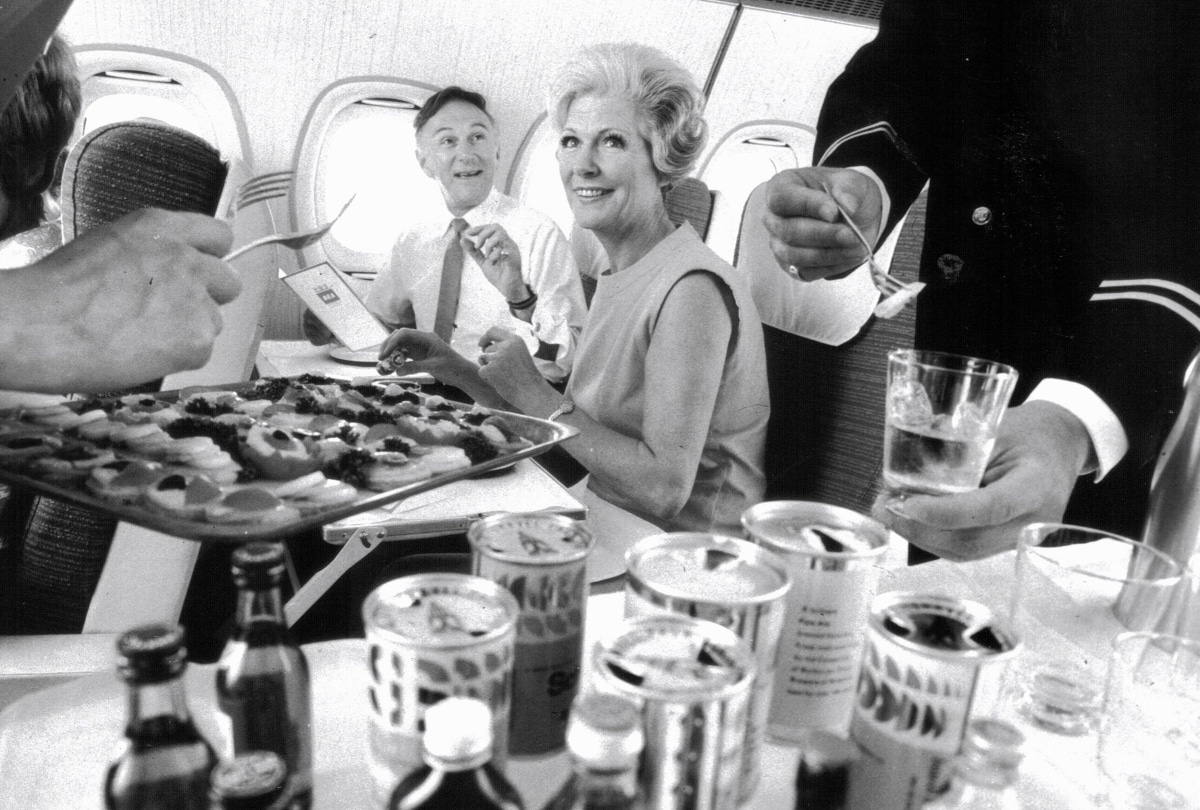 May 6, 1988: British Airways serve sausages for the first time in their in-flight meals on Concorde.

1991: The re-launch of the new First Class product involved new Regency striped white linen, spiral-stemmed wine and champagne flutes, marbled blue and white Royal Doulton china and new seat fabrics. The same year, BA re-launched their Economy Class product with a new name, ‘World Traveller’. Passengers enjoyed a large tray for main meal service on new grey and white melamine equipment. There was an appetiser, a choice of hot main meals, a dessert, and on some routes cheese and biscuits as well. A separate coffee and chocolate mints service was offered after the meal service, and nice extras included hot towels, orange juice before take-off while boiled sweets were offered before landing. 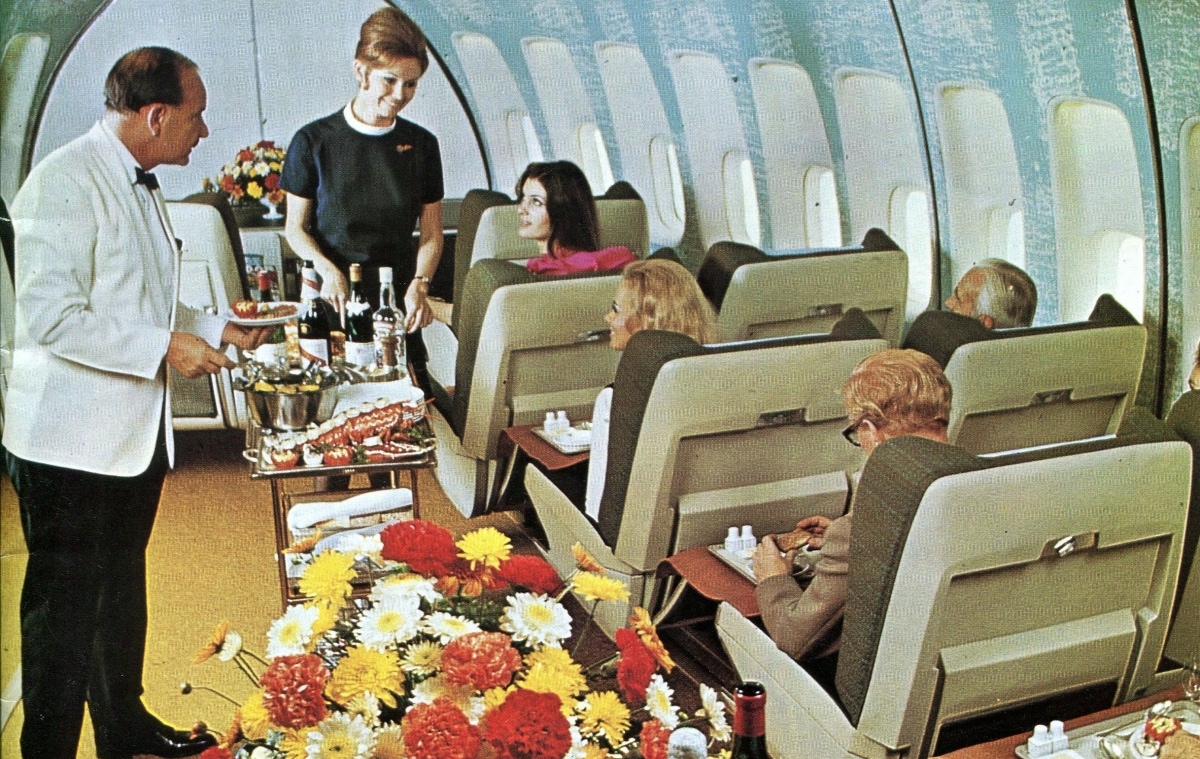 1993: The ‘First Class Sleeper Service’ was launched from New York to London and later extended to many other routes. It offered First Class passengers the opportunity to dine on the ground at the airport in BA’s exclusive restaurant before boarding their flight. Once on board, ‘Sleeper Suit’ pyjamas were offered. Sleep-inducing Charbonnel et Walker hot chocolate with cookies was served, and for those passengers who did not have time to eat on the ground, a hot and cold buffet menu was offered from the trolley in-flight, followed by cheese and dessert, hot chocolate, Horlicks, herb teas, and Hot Chocolate Cookies.

1995: Full-length 6ft beds are introduced to the first-class service, now branded simply as First. A newly flexible approach means meals are served whenever the passenger desires, with cabin crew having trained under Michel Roux at Bray’s Michelin-starred The Waterside Inn to ensure they reach the highest standards of service. BA proclaims this innovation ‘the first real 'a la carte' restaurant in the sky’. 2010: BA spent £100 million on new first-class cabins. Food and drinks are served as and when desired, and the afternoon tea service is based on that served in London’s Dorchester Hotel.