BOOK EXCERPT: 'Dreamers and Unicorns - How Leadership, Talent and Culture are the New Growth Drivers'

If you view growth of an enterprise from the tangible measures like revenue, growth, profitability etc, then terms like dreamers, unicorns and market shapers, and incumbents would be limited to organisations. If you use the new drivers of growth — leadership, talent and culture, the human side of work, workers and workplaces start emerging. Your focus turns from the tangible to intangible. It is more about the mindset than anything else. The categorisation is more future focused and up for debate. Inside every market shaper is a brewing team of incumbents. In every "incumbent" business lies a set of "Dreamers" who could become "market shapers". The biggest market shaper in the history of business has to be COVID-19.

The Human Version of Growth

In my experience, I find organisations to be a lot like human beings. They start off as infants where they learn languages that help them communicate with the world. It is a combination of nature and nurture that explains how they behave as adults. During the phase of adolescence, human beings experience rapid growth in their body structure— they gain height and build muscle. The invisible hormonal changes drive what is externally visible. As humans grow into adulthood, they make choices and these choices impact their future growth options. 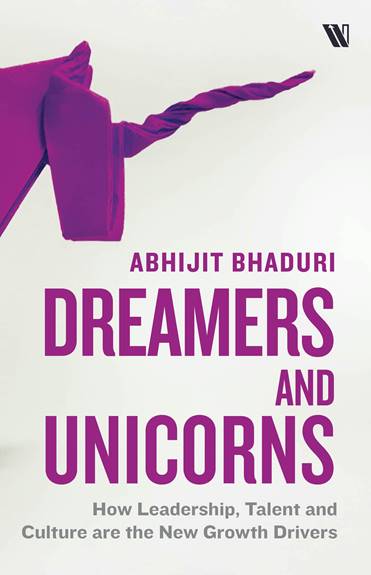 The American-German psychologist Erik Erikson found that our personality develops through eight stages of development, from infancy to adulthood. At each stage, the person experiences a challenge that impacts the psychosocial development of the individual.

1. Trust: In the first eighteen months, a child develops a basic belief whether others can be trusted or not. Later on in life it gives the child the belief that if there is a problem, others can be relied upon to help. 2. Independence: From eighteen months to three years, the child focuses on being independent. They exercise their free will and choice. This develops confidence in their own ability to handle the world. 3. Purpose: During the three to five years age range, children learn about interpersonal skills by playing with other children. They learn to take initiative and experiment. These are early experiences of leading others and to handle scenarios when others refuse to play by their rules. 4. Competency: During the five to twelve period, the peer group becomes very important in our life. This is a time when we discover early signs of our skills when kids show early signs of being a ‘natural’ in some areas. These could be sports or language or arts or some other area. At this stage when they compete with their peers, they realise that they are better than others in some areas and average or below average in some others. 5. Identity: The period of adolescence (between twelve and eighteen) is when gender identity gets formed as way of preparation for life as an adult. This is the time when occupational choices and gender choices get shaped. In some cultures, a certain occupation is associated with being a male. In another culture, the same occupation would be linked to being a female. This is a time for people to rebel and challenge the norms. 6. Love: Between the ages of eighteen and forty, people start to build deep relations with people beyond the family. They learn to experience love, warmth, safety and care in relationships. Avoiding intimacy, fearing commitment and relationships can lead to isolation and loneliness. 7. Altruism: There is a time to leave a legacy and it gets triggered between the ages of forty and sixty-five. The midlife crisis often gets us to think of going beyond the self.At this stage people experience a need to create something that will outlast them. This is also a time when those who feel successful actively mentor and find successors. They get involved in community building activities. At this stage people create positive changes that will benefit other people.

8. Wisdom: This is a stage when people look back at their lives and take stock. The stage sets in around sixty-five years of age and lasts till death. When people feel theirs was a life well-lived, it gives a feeling of completion. Else it may lead to a feeling of having wasted one’s life and that not enough time is left to make amends. Wisdom comes from a life lived well.

Human to Human not B2B or B2C: Build Trust

When an organisation gets formed, the leaders have to focus on gaining the trust of the employees, investors and the customers. As we enter the post pandemic world of work, trust between the employer and the employee will need to be regenerated because many promises have been broken. When employers install keystroke tracking software stealthily or scan employee emails it must be done with the employee having the freedom to opt out, if they so choose. The employees may feel the need to assure the employer that productivity will not suffer when they work out of remote locations. Many employers initially promised to treat the employees ‘like family members’ and then axed them when they were least expecting it. Every new beginning triggers the need for building trust in the relationships. That would be the first task of the leader.

Excerpted with permission from 'Dreamers and Unicorns-How Leadership, Talent and Culture are the New Growth Drivers' by Abhijit Bhaduri, published by Westland Publications.
Tags Book excerpt