The much anticipated annual art event has been on for 13 years but for the last two years, it has been virtual, thanks to the precautions taken due to the ongoing pandemic. 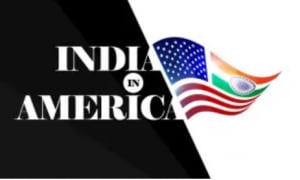 If you’re an admirer of noted Indian artists Bhupen Khakhar, MF Husain, SH Raza, and Manjit Bawa, March is a good time to be in New York when the Asian Art Week 2022 takes place. It is one Asia-centric week from March 16- March 25 of museum shows, gallery openings, and art auctions with talks, gatherings, and receptions too. The many events include a live auction at Christie’s of 40 works from the collection of noted Indian-American art collectors Mahinder and Sharad Tak on March 23. The Hindu God Vishnu as Venkateshwara, dated late 18th century.
“Over the last fifty years, Mahinder and Sharad Tak have put together one of the most important collections of South Asian modern and contemporary art in North America,” says Nishad Avari, Head of Sales, South Asian modern and contemporary art at Christie’s. “Apart from pioneering collectors, they are dedicated patrons of the arts and respected philanthropists.” Indeed, the Taks have been a part of the art community in America and have often hosted many of these noted artists from India and have nurtured friendships with them over the years.
According to Avari, the auction will include major paintings by Bhupen Khakhar, Manjit Bawa, Arpita Singh, and Sayed Haider Raza as well as Maqbool Fida Husain, Rameshwar Broota, Jogen Chowdhury, and Jagdish Swaminathan. Leading highlights from the collection to be offered in March include Bhupen Khakhar’s The Banyan Tree (1994) and Manjit Bawa’s Untitled (Devi) (1993), alongside major paintings by South Asian modernists including Maqbool Fida Husain, who painted a portrait of Mahinder, Sayed Haider Raza, Francis Newton Souza, Jagdish Swaminathan, Jogen Chowdhury, Rameshwar Broota and Arpita Singh. Untitled (Sohni) by Manjit Bawa
The Christie’s auction is just one of many art events taking place during Asia Week, with over 26 international art dealers, museums, and auction houses taking part and art lovers planning to come in from many parts of the world. The much anticipated annual art event has been on for 13 years but for the last two years, it has been virtual, thanks to the precautions taken due to the ongoing pandemic. Even this year’s press conference, which was meant to be live, had to be changed to virtual, due to Omicron.
Yet right now there is great excitement about the live events planned all over New York, at museums, galleries, and auction houses, all celebrating the many faces and aspects of Asian art. While Chinese, Japanese and Korean art has always been a big part of the Asia Week, over the years Indian art has also become a prime player with more and more art dealers showing South Asian and Himalayan antiquities. At the press conference, the dealers showcased some of their offerings.
This year two galleries are also showcasing contemporary Indian art. One of them is DAG with  “Women Artists from 20th Century India.” One of the highlights shown is an acrylic on a wood sculpture titled Surveyor and the Surveyed by Navjot, “which examines the representation of the female body from the point of view of women who have been instructed, since childhood, to survey their bodies as a response to being constantly surveyed by others.” Akar Prakar is a gallery in New Delhi that is showing online and one of the highlights is ‘Connecting’ by Jayashree Chakravarty. (Connecting by Jayashree Chakravarty in top image)
Dealers showcasing Indian art include Art Passages, Kapoor Galleries and Thomas Murray from the United States, Francesca Galloway (England), and  Oliver Forge and Brendan Lynch (England).
A lot of art is going to go under the hammer as there are six auction houses participating - Bonhams, Christie’s, Doyle, Heritage Auctions, iGavel, and Sotheby’s – there are 14 live auctions. Some of the highlights include at Bonhams a Gilt Copper Alloy Figure of Tara from Nepal, Early Malla Period, 13th century, estimated at US$500,000-700,000. At Christie’s, The Banyan Tree, a painting dated 1984, by Bhupen Khakhar (1934-2004). The estimate is: $1,800,000-2,500,000. At Sotheby’s. one of the highlights is Untitled (Sohni) by Manjit Bawa, with an estimate of $300,000-500,000. These are just a tasting of the many works available at auction during Asia Week. 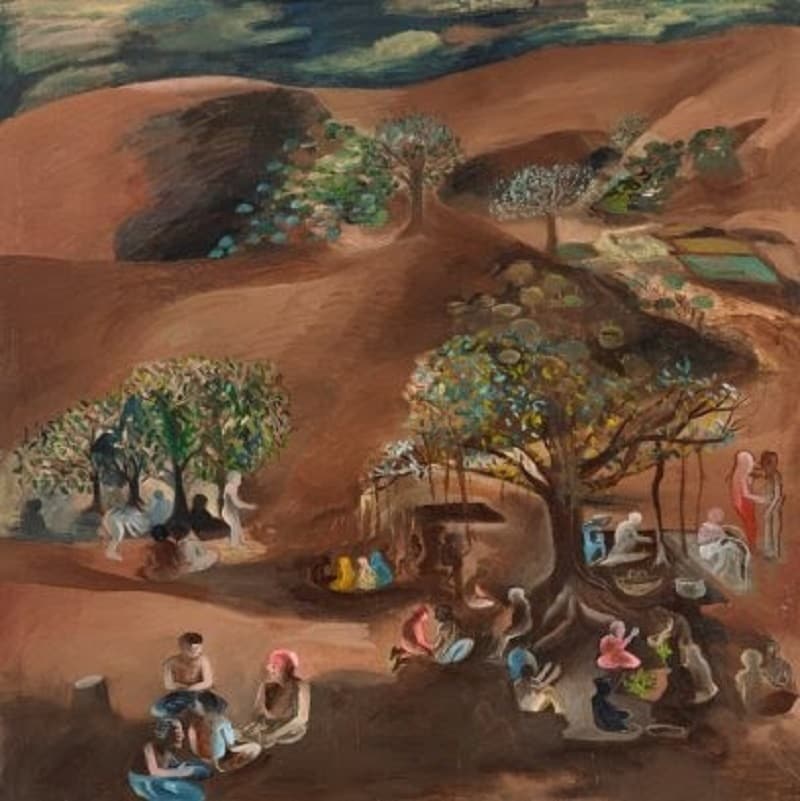 The Banyan Tree by Bhupen Khakhar
Says Asia Week New York chairman Dessa Goddard: “Everyone is excited to connect with the collectors and curators who have made New York such a major international destination for Asian art activities. Asia Week New York continues as an integral part of the Asian art market for international collectors, curators, and Asian art enthusiasts.”
During Asia Week, visitors should also catch the many shows of Asian art at the Metropolitan Museum of Art which will also host the much anticipated Met Reception on March 21st. It is a celebration of all Asia as one goes from one gallery to another, representing different parts of Asia. One of the must-see exhibitions at the Met during Asia Week is the magnificent  Bodhisattvas of Wisdom, Compassion, and Power (On view through October 30, 2022)  The Met’s Annual Lecture on the Arts of South and Southeast Asia will take place on March 18 - “Buddhist Art of Gandhara and the 'Year 5' Buddha: New Studies in Chronology and Iconography”
Even if you’re not an art collector, Asia Week is a great space to learn more about Asian art and understand the complexities of the art world from museums to art galleries and auction houses. It’s also a great opportunity to learn about different art forms from other parts of Asia, be it Korea, China, or Japan. Seen through the lens of art, the whole world can be your oyster during Asia Week New York.
—Lavina Melwani is a New York-based journalist who blogs at Lassi with Lavina. Read her columns here.
Check out our in-depth Market Coverage, Business News & get real-time Stock Market Updates on CNBC-TV18. Also, Watch our channels CNBC-TV18, CNBC Awaaz and CNBC Bajar Live on-the-go!