As plot over monoliths thickens, here's a throwback to another unsolved mystery — Cicada 3301

A group of mysterious monoliths is travelling the world since mid-November. Five shiny silver pillars have been spotted at sites across the globe, without explanations or warning.

Starting from the Utah Desert in the US to a hillside in Romania and California then to a nature reserve in The Netherlands and a beach in the UK — seems like the pillars are writing their version of Around The World In Eighty Days.

However, while the world is humming with the mysterious appearance and disappearance of these structures — which might or might not be the doing of an artist group — let's go back a little in time to a series of mystery puzzles that brought the internet on its knees.

The mysterious and the hardest puzzle on the internet?

Cicada 3301 is considered the most mysterious puzzle on the internet, their creators are vague, and the people who solve them are mysterious. However, the fact that they are hardest is debatable.

Kryptos, another famous puzzle is supposedly the hardest — it was created by Jim Sanborn and sculpted in front of the CIA headquarters in 1992. Kryptos might have taunted humanity for far longer than Cicada 3301 did, but at least, its origin is not mysterious.

Cicada 3301 first appeared on the internet on January 4, 2012, on 4Chan — an internet board where anyone can post pictures anonymously.

The accompanying text with the picture was harmless; you might have heard it when applying for a job:

"Hello. We are looking for highly intelligent individuals. To find them, we have devised a test."

"There is a message hidden in this image. Find it, and it will lead you on the road to finding us. We look forward to meeting the few that will make it all the way through. Good luck."

Harmless, right? Until you see the image: 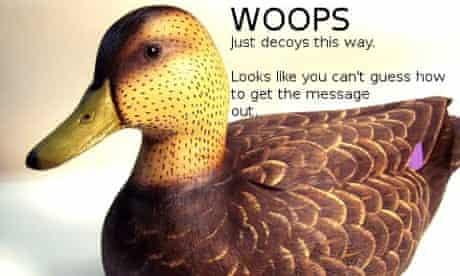 Several puzzles followed the first one. The first few were solvable using some wordplay and coding skills. However, as more followed, the references became less obvious.

The puzzles required the knowledge of everything from Victorian Occults to classical music to poetry. Some clues were accessible only from specific locations anywhere across the globe. However, all of them were focused around cybersecurity, steganography, and internet anonymity.

Whoever was looking for 'the most intelligent people on the planet', wanted someone who could discover hidden text.

As the difficulty of the puzzles grew, so did the cooperation. From message boards to chatrooms, players were collaborating to solve the puzzles. However, it soon became apparent that recruiters did not want followers.

The final puzzle that year directed the players to a Tor website, only the first to arrive players got to see what was on the address because soon original content was replaced by a message:

"We want the best, not the followers."

Cicada 3301 came back, exactly a year and a day later on January 5, 2013, more or less in the same version as before. It returned in January 2014, slightly different than the previous year, but more challenging than ever. The opening message of the most mind-blowing puzzle round that year read:

"Hello. Epiphany is upon you. Your pilgrimage has begun. Enlightenment awaits."

2014's was the last puzzle, and the codebreakers across the world are yet to break it.

It's nearly been six years since the last puzzle, yet we do not know what Cicada 3301 is, who they are, and what's their objective.

That hasn't stopped speculators from hazarding guesses though. Some believe that it is an intelligence agency recruiting officers. Some others believe a dark and secretive society created them.

Till date, there has been only one piece of information that can be partly trusted. Allegedly, one of the winners of the 2012 challenges leaked some contents of an email sent to them but kept their identity secret. The email reads:

"You have all wondered who we are, and so we shall now tell you. We are an international group. We have no name. We have no symbol. We have no membership rosters. We do not have a public website, and we do not advertise ourselves. We are a group of individuals who have proven ourselves, much like you have, by completing this recruitment contest, and we are drawn together by common beliefs. A careful reading of the texts used in the contest would have revealed some of these beliefs: that tyranny and oppression of any kind must end, that censorship is wrong and that privacy is an inalienable right."

While the email proves that it was not a recruitment tool used by CIA, MI6, NSA, or GCHQ, at the same time, it seems to be someone who has access to some hefty resources.

So far, the clues have appeared in eight nations and eleven US states, the secret recruiters have bought phone numbers, paid for server uptime, and offered something to the winners to earn their silence.
Tags data protection puzzle
Published : December 09, 2020 01:29 PM IST