Updated : August 09, 2019 02:04 PM IST
Calligraphy can be traced back to China as early as 200BC but Islamic calligraphy began in the 6th century and is strongly tied to the Quran.
Like life, there is a beginning and an end, how you use the pen will decide the fate of the letter, says Qamar,

She sat with kohl lined neatly in her eyes, a reed pen dipped in black ink and a sheet of white on a brown table. The colour of her wall a burnished orange, her dupatta the hue of a grey cloud and her story caught between the alphabets of Urdu and Devnagari. Not the trite loop of the Devnagari ‘k’ or the obvious dots of the Urdu ‘sh’, but turquoise letters standing statuesque as a peacock, a banyan tree, the name of Allah stretching with the swoosh of a green stroke.

In a first-floor room of Delhi’s Khirki Extension, Qamar Dagar, the country’s most celebrated pictorial calligrapher, was speaking mellifluously of her companions - the alphabet that became her soulmate unknowingly. In the crowded household of the famed dhrupad singers, the Dagar Brothers, Qamar could strum the tanpura but calligraphy was not a deliberate choice. The ancient art beckoned when she met her spiritual guru Hazrat Amin Abdullah Khan ‘Baba’ who taught her the tenets of simplicity and the incredible beauty of Iraqi calligrapher Hassan Massoudy’s work. 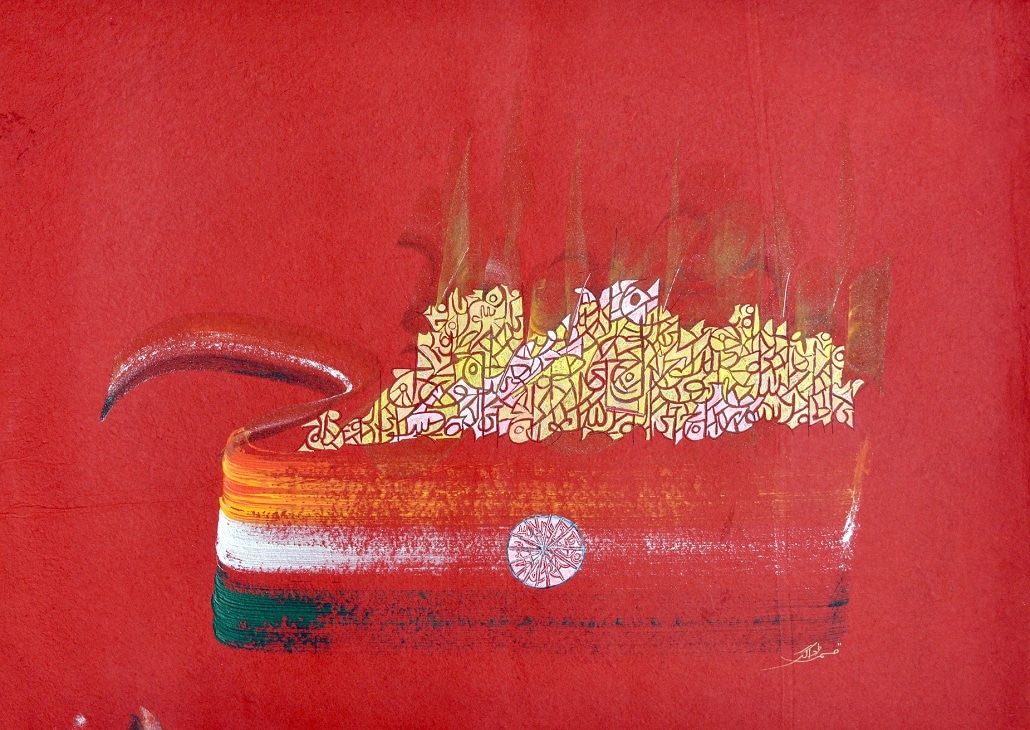 Having learnt the Urdu script, I know the lucidity of a straight Alif and the evocative curves of the Tashdeed, but I knew not much about calligraphy. Not even about Qamar Dagar, founder Director of Qalamkaari Creative Calligraphy, and recipient of Nari Shakti Samman. At Andaz (New Delhi) when Pratiti Rajpal, Director of Marketing Communications, rattled 401 Reasons to Fall in Love with Delhi (401 reasons because the hotel has 401 rooms), I spurned the forts, tombs, wrestlers, paan and paranthas and narrowed it to Six Heroes of Delhi list which is part of Hyatt’s FIND Experiences. It was in the Andaz’s Heroes list that I found Qamar Dagar, the calligraphist. Calligraphy can be traced back to China as early as 200BC but Islamic calligraphy began in the 6th century and is strongly tied to the Quran. The earliest calligraphers dipped their pens in piety and copied the verses of the Quran. For long, black was the artist’s only colour but gradually maroon joined black to narrate a tale, an emotion, a name with letters.

As Qamar spoke history in chaste Urdu, I gaped at the framed dervishes in blue, the neck of the peacock, the wave of the Yamuna, and the thick canopy of a banyan tree. Devnagari and Urdu letters were hidden in the motifs, a few evident, most elusive. Only when Qamar elaborated upon the seamless blend of the two scripts could I find the subliminal. “Here’s the sarkanda (reed pen) and here’s the green, the blue and the red. Pick your colour and write whatever you want,” Qamar began like a benign guru. Surrounded by beautiful letters, I was hesitant to write in a pretty long hand. What if my letters look drab? What if the Devnagari A turns bland with my pen? What if the dots become lifeless in my hand? The sarkanda was dangling between my fingers and ink was drying.

“If you hurry, the ink will dry faster and the stroke will turn prosaic. Go slow, let the stroke take its time to begin and end. Like life, there is a beginning and an end, how you use the pen will decide the fate of the letter. Think of calligraphy as if you were living a lifetime in the moment,” Qamar taught in her mellifluous voice. During the interview, Qamar Dagar calligraphed this author’s first name.

On a square white sheet, I drew the A of Devnagari, the Alif of Urdu; the strokes diffident, the curves indecisive and the ink faltering in my hands. While I struggled with the A and Alif, quietly with a few deft strokes Qamar calligraphed my first name in maroon and blue. Her strokes magnificent, the dots symmetrical, the pencil fill-in abstract and her signature at the righthand corner.

In the room with burnished orange wall, the letters of Qamar Dagar spoke through strokes.  I, surely, was daft as a calligrapher but of Andaz Delhi’s 401 Reasons to Fall in Love with Delhi, I fell in love with 1 reason. With letters and Qamar’s idea of life: Go slow, let the stroke take its time to begin and end. Like life, there is a beginning and an end, how you use the pen will decide the fate of the letter.

That thought is reason enough to love. And to live.

Good to know: A calligraphy lesson with Qamar Dagar is part of Andaz Delhi’s curated experiences in Delhi. The experience will soon be included in Hyatt’s Global FIND Experiences and can also be redeemed with Hyatt’s loyalty point.