By CNBC-TV18 | Jul 03, 2019, 12:29 PM IST (Updated)
When it comes to cricket, India's enthusiasm has always been unmatchable, with not only the players but also the fans making headlines. Lately, a number of team India fans have grabbed the limelight, becoming overnight sensations.
This time it is 87-year-old Charulata Patel, who won several hearts with her love and passion for cricket, as she cheered for her favourite team at the Edgbaston Cricket Ground on Tuesday during the India vs Bangladesh match.
India won the match, but the cameras only followed the elderly lady, who would later go on to become a sensation over the internet.
Patel now has thousands of admirers including skipper Virat Kohli and deputy Rohit Sharma. Among her admirers is also business tycoon and Mahindra Group chairman Anand Mahindra, who has, in fact, agreed to reimburse her future match tickets as he believes Patel is the lucky charm for the team.
"As per my tradition, I wasn’t watching the match. But I’m going to switch it on now just to see this lady... She looks like a match winner...," he said in a tweet.

As per my tradition, I wasn’t watching the match 😊 But I’m going to switch it on now just to see this lady...She looks like a match winner.... https://t.co/cn9BLpwfyj

When a follower asked the business tycoon to sponsor her match tickets, Mahindra gladly said he would do so, if one finds out who she is.

Find out who she is & I promise I will reimburse her ticket costs for the rest of the India matches!😊 https://t.co/dvRHLwtX2b

Kohli and Sharma met the lady after a thrilling 28-run win against Bangladesh and sought her blessings. 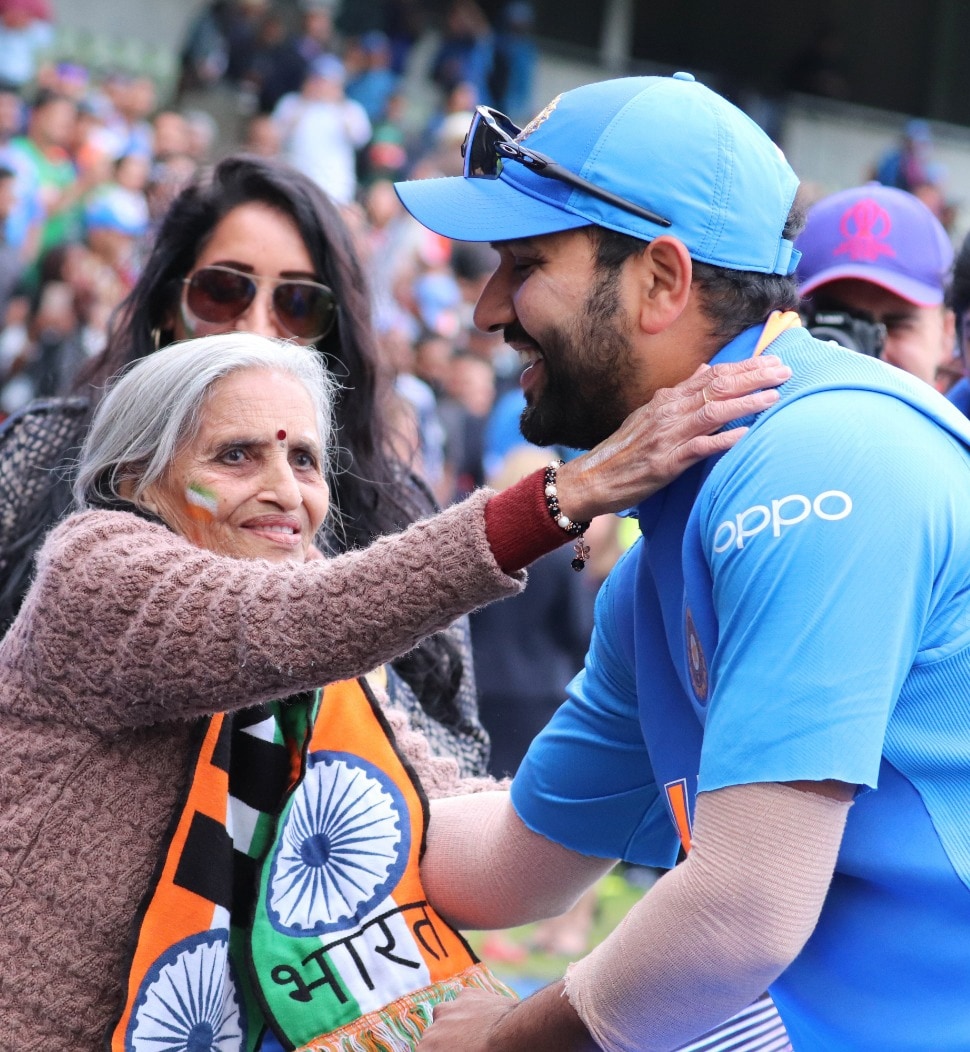 India opener Rohit Sharma greets 87-year-old Charulata Patel, who became a social media sensation after an image of her blowing a horn to cheer the Men in Blue during their World Cup match against Bangladesh went viral, at the Edgbaston Cricket Ground on July 2, 2019.  (Photo: IANS)
Kohli took to Twitter to say:

Also would like to thank all our fans for all the love & support & especially Charulata Patel ji. She's 87 and probably one of the most passionate & dedicated fans I've ever seen. Age is just a number, passion takes you leaps & bounds. With her blessings, on to the next one. 🙏🏼😇 pic.twitter.com/XHII8zw1F2