Updated : February 14, 2020 01:58 PM IST
The national carrier owns thousands of artefacts that are present not just in India, but overseas as well.
The artworks were replicated into in-flight menus, calendars, coasters, aircraft interiors and so much more.

Back in 2016, a courtesy call on an old friend and then newly appointed CMD of Air India (AI) Ashwani Lohani turned into an opportunity of a lifetime for art historian Meera Das. Something she would cherish for a lifetime. Das was given a rather arduous task of assembling all objet d'arts that AI had owned, till date.

As the national carrier is grappling with financial troubles, its decades-old, rich art collection has been put on display at the Nehru Centre at Worli, southern Mumbai. Maharajah of Skies: Portrait of Air India Through its Archives, showcases the history of the national carrier through these rare collectibles.

Among the several articles on display are paintings, including the works of VS Gaitonde and SH Raza, chinaware once served to the Pope, the 9 yards of wonder that made Air Indian stewardesses the most glamorous of their time, and even an ashtray exchanged for Surus, an elephant!

AI owns thousands of artefacts that are present not just in India, but overseas as well. And so, collating these from world over hasn’t exactly been trouble free. Das, along with Uttara Parikh, former commercial director of advertising and product development at AI, began by numbering, photographing, assembling and finally, storing the artefacts that the airline owned. For a brief period, the articles had found a home in the 18th floor of the national carrier’s headquarters at Nariman Point, but not anymore.

Sources of AI’s paintings are multiple; A few were commissioned, some purchased. Art enthusiasts would know that Gaitonde -- a quintessential and low profile Mumbaikar and Raza, who lived in France for many years, are among the most illustrious of Indian painters who were known all over the world. And the artworks were not just limited to their original medium – they were replicated into in-flight menus, calendars, coasters, aircraft interiors and so much more.

The airline’s booking offices overseas were built keeping in mind the rich culture of India. Thus, being ‘glocal’ was something they always pursued. Perhaps the message JRD Tata wanted to give was to find art even beyond just paintings. It is thence, perhaps the only company in the world to have their mascot replicated on things, as minute as even a matchstick. 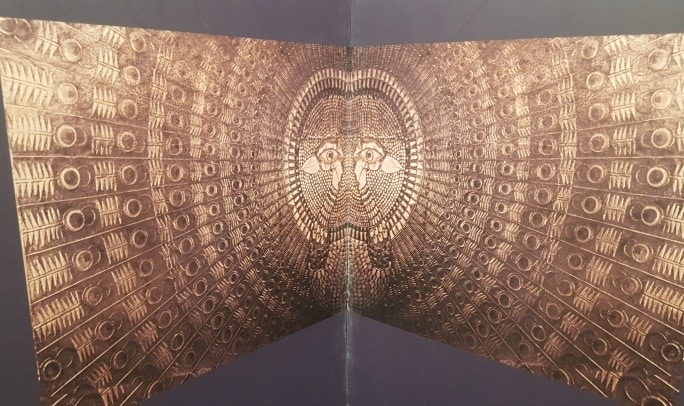 B Prabha’s Peacock, formerly kept in London’s booking office was in fact, only a single-headed peacock. It was positioned opposite a mirror to accentuate.

Can price tags be put on such art objects?  Perhaps no. “It is difficult to gauge the price of these works of arts,” says Meera Das, curator of the show. Unfortunately, one doesn’t know the fate of this rich heritage, if and when the carrier is sold off.