After 35 years in Hollywood and $2 billion in collections, this Indian tennis champ is a pro in cinema

Updated : September 08, 2019 01:25 PM IST
“Now more than ever the Hollywood dream needs to be multicultural and all inclusive,” says Amritraj.
Amritraj is also developing an Indian-American half hour comedy series like Fresh off the Boat with Paul Feig’s Diversity Initiative Powderkeg and ShivHans Pictures from writers Sameer Gardezi (Modern Family) and Jimy Shah.
This year, Amritraj announced the start of Hyde Park Entertainment Asia with the signing of some very hi-profile crème de la crème projects.

He’s made one hundred films in Hollywood with $2 billion in worldwide revenues. Not bad for a boy from Chennai who gave up the racquet for reel life. This year producer Ashok Amritraj completes 35 years in Hollywood, having made his first film as a newbie in 1984. Of course Amritraj, along with his brothers Vijay and Anand has had a shining parallel career in the tennis universe but is one of the most successful Indian-American producers in Hollywood. His Hyde Park Entertainment Group, which marks its 20th anniversary this year, started small and scrappy but is one of the leading independent entertainment companies in Hollywood today. It runs the gamut from development, financing, and production, and has partnered with major Hollywood studios. The big success stories which have been hits at the box-office and garnered awards include Premonition, Ghost Rider, Spirit of Vengeance, Walking Tall, 99 Times, Blue Valentine and Shopgirl. Amritraj has produced the films in collaboration with big studios and starring big stars including  Bruce Willis, Sandra Bullock, Sylvester Stallone, Angelina Jolie, Cate Blanchett, Dustin Hoﬀman, Steve Martin, Antonio Banderas, Robert De Niro, Dwayne “The Rock” Johnson, Jennifer Aniston, Nicolas Cage. When I last interviewed him a decade ago, I had observed about this tennis champ’s second career, “In an equivalent of dexterity and fancy footwork, he has built his cinematic success on passion, business acumen and a talent for networking.”

Hollywood is a tough city to succeed in and money alone cannot buy success. As Amritraj told me, “So many people come with money and leave with less. It’s got to be a combination of passion, of taste, of working incredibly hard.”

While Hyde Park, which has an office in London, continues to produce and finance studio and independent films and television from its headquarters in Los Angeles, it is expanding its production operations by adding an Asian base in Chennai, India.  His daughter Priya Amritraj is a chip of the old block and is director of film and television at Hyde Park Entertainment Group, passionate about diverse, women-driven films.

Ashok Amritraj continues his long-term feature film financing partnership with ImageNation Abu Dhabi but goes one step further this year in returning to his Indian roots. Now in its milestone year, the company is launching a new Asian division committed to showcasing the work of Indian and Asian filmmakers.

“Now more than ever the Hollywood dream needs to be multicultural and all inclusive,” says Amritraj, “I look forward to collaborating with wonderful Indian and Asian talent long into the future to tell unique and authentic stories that reflect our global world.”

Indeed, in this Asian century, what could be better than turning the laser light on that continent, especially on India? This year, Amritraj announced the start of Hyde Park Entertainment Asia with the signing of some very hi-profile crème de la crème projects. These include Pashmina, the exciting large-scale animated musical feature from Gurinder Chadha and Bend It Pictures with music by AR Rahman via Netflix which announced this project in March. The movie is based on the best-selling graphic novel by Nidhi Chanani and is about family and cultural connections.

Amritraj is also developing an Indian-American half hour comedy series like Fresh off the Boat with Paul Feig’s Diversity Initiative Powderkeg and ShivHans Pictures from writers Sameer Gardezi (Modern Family) and Jimy Shah.

Another much anticipated venture is a franchise of films based on Maximum City by  Suketu Mehta that explores the interconnecting power, politics, and criminal underworld of Mumbai. This exciting series will have the don of the Gangs of Wasseypur – Anurag Kashyap as the showrunner and director and Good Bad Films LLP will co- produce with Hyde Park.

Hyde Park’s Asian division also has under its belt Paradise Towers, a drama series adaptation of Shweta Bachchan Nanda’s bestselling novel about life in an exclusive Mumbai apartment complex. Zoya Akhtar recently directed Amazon's Made in Heaven and her Tiger Baby films collaborates with Hyde Park Entertainment. (Shweta Bachchan-Nanda is a columnist for Vogue and daughter of Indian superstars Jaya and Amitabh Bachchan.)

Noted Indian-American author Chitra Banerjee Divakaruni’s bestselling trilogy The Conch Bearer is adapted for a young adult fantasy series and Imitiaz Ali (Highway, Rockstar) will be the showrunner and will direct the pilot for the series.

Rounding up this list of amazing projects with pedigreed stars and film-makers is Deb, an 8-part television series from renowned writer-director Nagesh Kukunoor, whose film Dhanak won the Crystal Bear Grand Prix at the Berlin International Film Festival. The series is a modern-day, edge-of-your-seat thriller rooted in ancient Indian mythology. So we caught up with Ashok Amritraj who lives in Los Angeles to get his thoughts on the world of Hollywood and the place of Indians in it. He has been hugely successful in two careers – through the 70’s he was known for his tennis victories with his brothers, and in the 80’s he shifted gears to the entertainment industry. He’s got a lot of firsts in his Hollywood career – he was the first Indian producer in the Academy of Motion Pictures and has served on various Academy boards. He was one of the earliest Indian members of the Producers Guild.

Amritraj says the impetus started when many of the streaming platforms came along, and he says “the credit goes to Netflix which has done an extraordinary job of changing the world we live in and the way we consume content which comes in so many different forms including films, TV and documentaries”. 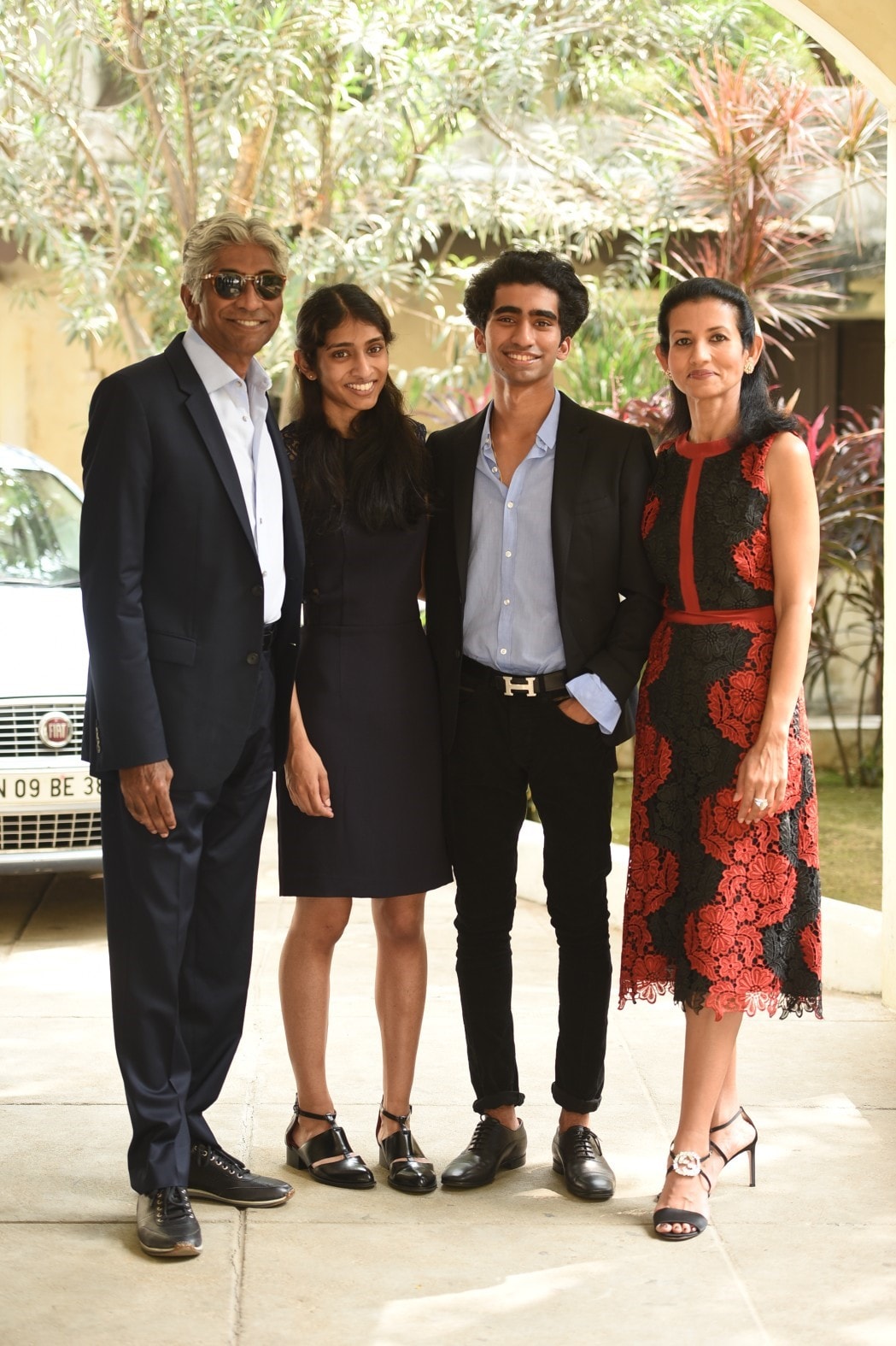 He was appointed the UN Goodwill ambassador for the Sustainable Development Goals in 2016 and has also received the Knight of the Order of Arts and of Letters (Chevalier de L’Ordre des Arts et des Lettres) from France. Diversity has always been high on Amritraj’s priorities. He recalls, “We created TV shows in India for National Geographic, and documentaries that revolved around diversity, gender equality, and universal education.”  India has always been close to his heart – he did ‘Jeans’, a film starring Aishwarya Rai which was nominated by India for the Foreign film Oscar.  He also hosted a TV show ‘Gateway to Hollywood’ which discovered Indian talent.

“I've always enjoyed mentoring, and connecting the world, but Hyde Park Entertainment Asia is now a very specific entity to create programming, and tell unique and wonderful stories from India with the wonderful filmmakers that are over there.  To me, it's always driven by the material and by the filmmaker, and that’s always been very important to me.” For Amritraj this is an important milestone in his Hollywood career.  Although these films are all in different stages of development, one thing is certain: these projects are finally giving Indian books and writing the importance they deserve and will showcase the best of Indian entertainment and thought.

These films give Asian actors and filmmakers the world stage. So bring on the popcorn – we have a lot to celebrate!