A new addition to the multibillion dollar American wedding industry

Updated : February 08, 2019 09:38 PM IST
As in India, in America too, wedding planners are always on the lookout for new trends, new twists to make each wedding the most innovative.
The latest to join this baraat is Chef Floyd Cardoz who is renowned as the initial purveyor of modern Indian food to America as chef for Danny Meyer’s Tabla and North End Grill.
Celebrity chefs Hemant Mathur and Gaurav Anand are catering topnotch weddings across America and destination weddings from Aruba to Italy, with a feast of Indian and international food and desserts.

How would you like chef Floyd Cardoz to whip up his specialties at your wedding? How about chef Gaurav Anand rocking your destination wedding with his signature dishes? Then there’s Michelin chef Hemant Mathur with his co-chef and wife Surbhi Sahni feeding your guests. Sounds like a fantasy? No, it’s reality and happening!

There was a time when you had to travel to the celebrity chefs to taste their food – now the celebrity chef is traveling to you via the Big, Fat Indian Wedding! As the Indian-American population has skyrocketed in the US and more and more children are coming of marriageable age, the Indian wedding phenomenon continues to dominate the landscape. As in India, here too in America, wedding planners are always on the lookout for new trends, new twists to make each wedding the most innovative. For many parents and affluent young couples, cost is not a factor, on this, the most important day of their lives. And so we have some celebrity chefs donning a new avatar – that of caterer! Now 500 to a 1000 people can taste the chef’s specialties at one time.

The latest to join this baraat is chef Floyd Cardoz who is renowned as the initial purveyor of modern Indian food to America as chef for Danny Meyer’s Tabla and North End Grill. A true celebrity chef he’s been on Bravo’s Top Chef Masters and received the James Beard Humanitarian Award of the Year. Since then he has conquered the taste buds of America through his many innovative restaurants which have included White Street, Paowalla and now the Bombay Bread Bar. The expansion has also taken place across continents with Indian Canteen becoming a popular fixture in Mumbai, and his latest O Pedro, celebrating Goan food. Cardoz recalls that over the years he was often asked to cater weddings but felt that he did not have the bandwidth at his restaurants to do so. Until he connected with the award-winning catering house of Neuman’s Kitchen, which is based in New York and Philadelphia and is affiliated with LCA, the Leading Caterers of America. He says, “They do things the way I like them done and that’s why I decided to work with them.”

What a coup for the bride to be able to say, “The wedding feast is designed by Floyd Cardoz!” The international menus will feature such fusion plates as Black Pepper Shrimp with wild watercress and watermelon salad as well as Shishito Pepper Pakoras and include options for a live chef station with Cardoz himself. The Cardoz menus will be available starting March 2019 and will begin with a focus on bridal and life cycle events as well as destination weddings. Cardoz says he will be bringing his sensibilities and his experience and giving the people exactly what they want, whether it is modern Indian or traditional food. He quotes a colleague who says, “If someone wants a Mercedes Benz, why would you tell them to get a Toyota Carolla? They want what they want. You should have the ability to give them what they want, without dumbing it down.”

One celebrity chef who has been doing wedding catering for many years and is quite a pro at it is Hemant Mathur who has half a dozen restaurants – Saar Bistro, Malai Marke, Chole, and Chote Nawab and now a brand new one Maska in Miami. Mathur who was the first Indian chef to be anointed with a Michelin star in New York, has the added hidden weapon of chef Surabhi Sahni, who is also his co-chef at Saar Bistro, their restaurant in Times Square. 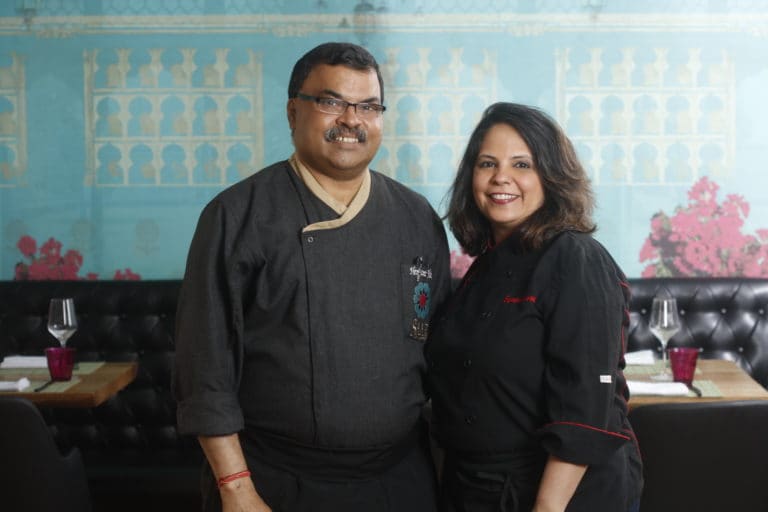 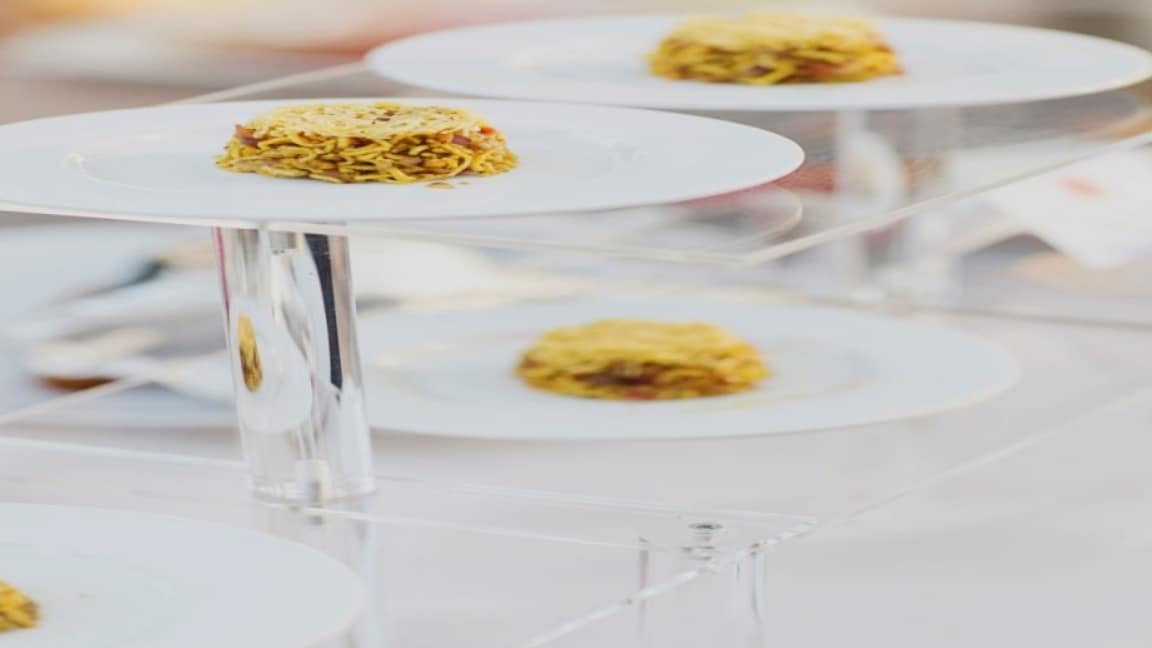 Their collaborations can be seen at major upscale fundraisers, the Mayor’s  Diwali Gracie Mansion celebration as well as at Indian weddings. Mathur and Sahni have been the leaders in the wedding scene and have done many big and small weddings including some very high profile ones such as that of Indian-American Hollywood celebrities Melanie Chandra in Turks and Caicos, Ami Seth in Puerto Rico and Aasif Mandvi in Atlanta. Sahni says that while each of the weddings they’ve done have been amazing, she particularly recalls Ami Seth’s wedding with a live dance floor on the beach.

While Mathur and Sahni are known for many signature dishes, she says, “We always sit and speak to the bride and groom and the wedding is geared towards what they like or dislike.  Since we also do a lot of crossover weddings we are mindful of the backgrounds of the bride and groom and include something of their heritage.  We are always excited when they want us to do a recipe from their family as that adds that special touch to the wedding.” Guests at a wedding catered by Hemant Mathur

Chef Gaurav Anand has three buzzing restaurants in New York City –Moti Mahal Delux, Bhatti Grill and Awadh and is actively involved with the culinary heartbeat of New York through food and wine festivals, cooking shows and TV appearances as well as elaborate galas. He has gone big time into the wedding catering business doing multimillion dollar weddings as well as small elegant boutique weddings. His trademark is glamour and the food part of the wedding turns into a major celebration with Indian street foods, exquisite presentation of international dishes and an elaborate dessert bar. 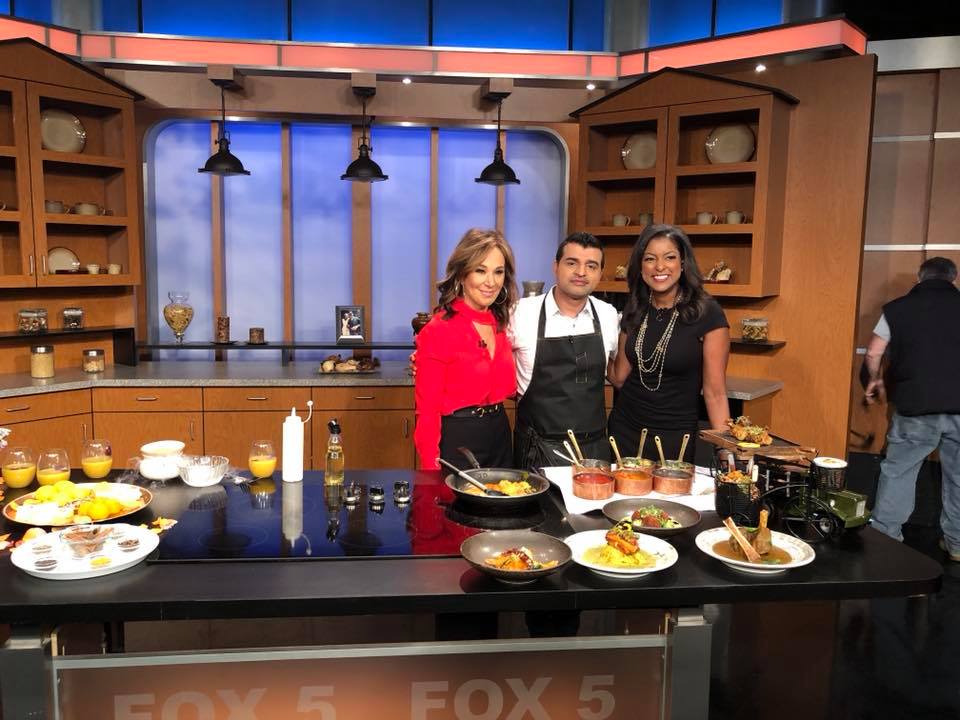 Anand points out that many of these weddings have different venues for each event, a huge team of vendors collaborating on many moving parts, and everything is custom created and designed down to the tiniest details. As he says, “South Asian weddings are becoming an institution, some taking more than a year to plan and several months to coordinate the logistics.”

The food is always the highlight, “The food is the center point and these weddings are moving towards sit-down dinners with anywhere from 4 -6 pre plated courses. The traditional buffet dinner is making an exit, with more interactive live stations of multinational cuisines being the focus of cocktail hour and receptions. Live stations keep the guests engaged, while the long cafeteria like buffet lines are avoided as guests mingle around the room and get a choice of various offerings.”

Anand points out the big, high-end Indian-American weddings are not only in New York but right across America, and abroad. Recent weddings he has catered have taken him to the Omni Hotel in Dallas, the Ritz and Mayflower Hotel in Washington DC. This year he is doing a big wedding in Lake Como in Italy, another in Kansas and at the Ritz Carlton in Aruba.

Indian-American chefs are certainly adding yet another layer to the all-American wedding cake!