To celebrate Women's Day this year, Twitter launched a special emoji that was activated with the hashtag #EveryWoman

Twitter has been at the epicenter of powerful public conversations, and women’s movements have been a part of that. For instance, in the first few months of 2020 there was an 87% growth in conversations in India to do with women’s day and women’s empowerment when compared to the same months in 2019 (Jan 1 - Feb 25).
Globally, there have been 125 million Tweets about feminism and equality over the past three years. Conversations are closely tied to International Women’s Day, as Twitter has seen a spike in Tweet volume over the past three years on and immediately surrounding March 8th. To celebrate the day this year, Twitter has launched a special emoji that is activated with the hashtags #EveryWoman and #प्रत्येकमहिला. 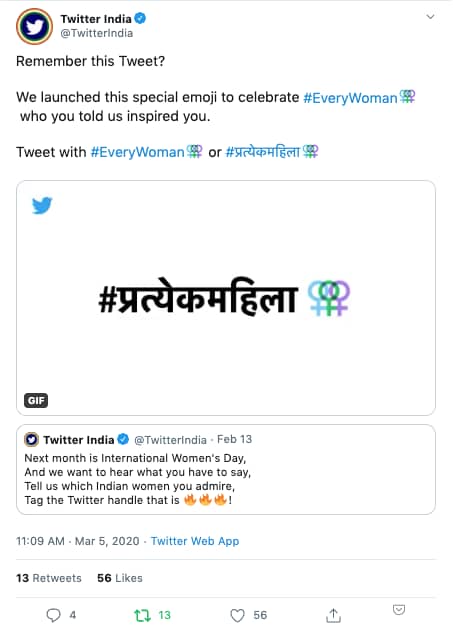 Maya Hari (@maya_hari), Vice President, Asia Pacific at Twitter said, “At Twitter, we see incredibly vibrant and diverse voices on our platform, from those engaging in joyful everyday conversations, to strong women who raise awareness about issues that matter. Through #EveryWoman, we want to highlight every shade and every kind of Indian woman, and honour those who are transforming how we are perceived in the workplace and beyond.”
#EveryWoman Champions by Twitter India:
Honouring #EveryWoman’s voice on the platform, Twitter India is celebrating these five inspiring women: 1) #VoiceOfChange: Chinmayi Sripaada @Chinmayi
Tamil playback singer Chinmayi Sripaada is a #VoiceOfChange on Twitter. She uses this voice to talk about harassment in the entertainment industry, while bringing to the fore stories of women from across India.
“Twitter is the mic that marginalised sections of society never had before. The platform has given the ability to women to use their words, advocate for themselves and speak up about the issues that are important to them. I feel glad to be recognised as a #VoiceOfChange by the platform, as it means I am using my voice well, to influence positive change and encouraging other women to voice their thoughts and perspectives too.” – Chinmayi Sripaada (@Chinmayi)
Here’s a video of Chinmayi Sripaada talking about being a part of the second wave of the #MeTooIndia movement and using Twitter as platform to raise her voice:

The #VoiceOfChange: @Chinmayi uses her voice for more than beautiful music. She Tweets for #EveryWomanpic.twitter.com/bUIOZJTF4L

2) #RecordBreaker: Dutee Chand @DuteeChand
Dutee Chand, India’s fastest woman clocking 100 metres in 11:24, is a #RecordBreaker both on and off the track. As the first Indian sportsperson to be open about being part of the LGBTQ+ community, she isn’t afraid of unchartered waters, using her Twitter handle to address gender bias in sports. Her most Retweeted Tweet of last year was when she claimed her Summer Olympic trophy telling the world ‘Pull me down, I will come back stronger!’
“My well-wishers in India and across the world have given me the motivation and strength over the years to be unapologetically who I am. It gives me happiness to be able to connect with my fans and friends, and let them know exactly how hard I have been working. I hope more Indian women use Twitter to speak up for themselves and get support from people and authorities across India.” – Dutee Chand (@DuteeChand)
Here’s Dutee Chand talking about her resilience to fight, stand up to the society and using Twitter to connect with her fans across the country:

The #RecordBreaker: @DuteeChand Tweets boldly about the challenges of being an elite athlete. She Tweets for #EveryWoman. pic.twitter.com/mYDOTSbEWP

3) #Catalyst: Kiran Mazumdar Shaw @kiranshaw
Kiran Mazumdar Shaw, a first-generation entrepreneur and scientist is globally lauded for her work in the biopharmaceuticals industry. She shattered gender stereotypes in the workplace by becoming a successful entrepreneur. Now, she uses Twitter to support women across STEM and create awareness about issues in and around Bengaluru where she lives.
Here’s a video of Kiran Mazumdar Shaw talking about breaking gender barriers in the corporate world and the myths around women entrepreneurs. She says, “It’s a myth to think that women are not bold enough to run daring businesses. It's myths that I think all of us have busted over time.”

The #Catalyst: @KiranShaw Tweets for women in science and women in the workplace. She Tweets for #EveryWoman pic.twitter.com/dg4Wc7uqB0

4) #TwitterTurk: Shereen Bhan @ShereenBhan
Shereen Bhan, a journalist, news anchor and Managing Editor, CNBC-TV18 uses Twitter to break a range of news, many of these stories have redefined the Indian economic landscape in recent times.
Check out this video of Shereen Bhan talking about her journey and advice to aspiring journalists. She says, “For me Twitter is about making connections for information and with people. It’s a great way to be able to tell your story and to reach out to people whom you may otherwise not be able to reach out to through the channel.”

The #TwitterTurk: From big scoops to interviewing Young Turks, @ShereenBhan keeps us plugged in to the fast-paced world of business news. She Tweets for #EveryWoman pic.twitter.com/k4SQobRRYN

5) #TwitterDiplomat: Late Sushma Swaraj @SushmaSwaraj
An illustrious leader and India’s former Minister of External Affairs, Late Sushma Swaraj had mastered Twitter. She was committed to public service, and used Twitter to promptly help those who directly reached out to her.
This video of Bansuri Swaraj pays tribute to her mother Late Sushma Swaraj. Bansuri speaks about her active contribution to public service through Twitter. She says, “Twitter has ensured that the government of the day across countries has now become more accountable and there’s a lot of power to the people to put their point of view across to their leaders directly.”

TwitterDiplomat: Late @SushmaSwaraj was a fierce advocate for using Twitter for governance, connecting with Indians across the world. She Tweeted for #EveryWoman pic.twitter.com/t0p6NKvKYd

Speaking about the initiative as well as conversations by women on the platform, Manish Maheshwari (@manishm345), Managing Director – Twitter India said, “Twitter is committed to powering positive change by fostering healthy conversations, sharing stories that inspire, and highlighting individuals who create real impact through Twitter. As a company committed to ensuring inclusivity and diversity, #IWD2020 is particularly special to us. In fact, Indians are the second largest group to follow @TwitterWomen after Americans. It is our honour to acknowledge these incredible Indian voices who make conversations on Twitter interesting and vibrant, inspiring #EveryWoman while at it.”
Transforming discourse on women-related conversations
From 2017 till now, #MeToo/#MeTooIndia, #SareeTwitter, #GirlsWhoDrinkBeer, #LahuKaLagaan and #JhumkaTwitter emerged as top women conversations and movements on the platform - showcasing a strong representation of celebrations and movements on the platform.
Tags
next story