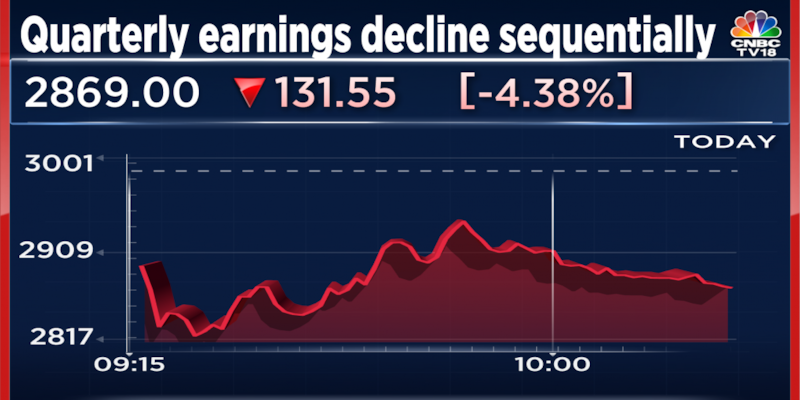 Shares of Timken India have outperformed the S&P BSE Sensex over the last 12 months.

Timken India Ltd. shares dropped as much as 6.6 percent in early trade on Tuesday after the company announced September quarter results after market hours on Monday.

Revenue from operations for the company increased 24.6 percent from the same period last year to Rs 695.4 crore. However, when compared to the June quarter, the revenue is marginally lower from the figure of Rs 699 crore.

Net profit for the period also increased 23 percent to Rs 97.6 crore but was lower on a sequential basis by 17.3 percent.

On a year-on-year basis, the company's operating profit increased by 6 percent while the EBITDA margin contracted by over 350 basis points to 18.8 percent from 22.2 percent during the year-ago period.

Timken India (previously known as Tata Timken) is primarily into manufacturing and distribution of tapered roller bearings, components, and accessories for the automotive sector and the railway industry. It also provides maintenance contract services and refurbishment services.
In a research report dated August 16, 2022, equity research firm ICICI Direct issued a ‘buy’ rating on the stock with a 12-month target price of Rs 3,560. The brokerage cited a strong balance sheet and growth prospects led by railways, wind, and exports behind its bullish stance.
Shares of Timken India are trading 4.3 percent lower at Rs 2,870, as of 10:20 AM. The stock has gained over 60 percent during the last 12 months, outperforming the benchmark Sensex, which has risen only 2 percent during the same period.
Check out our in-depth Market Coverage, Business News & get real-time Stock Market Updates on CNBC-TV18. Also, Watch our channels CNBC-TV18, CNBC Awaaz and CNBC Bajar Live on-the-go!