Mukesh Ambani chairs Reliance Industries (RIL), which has interests in petrochemicals, oil and gas, telecom and retail. Reliance was founded by his father late Shri Dhirubhai Ambani in 1966. Here's a look at his journey so far.

Indian businessman, Mukesh Ambani has completed 20 years as the Chairman and Managing director of now a global conglomerate, Reliance Industries. He took over in July 2002 after the demise of his father and the founder of the company, the late Shri Dhirubhai Ambani. Here is his journey in numbers at the helm of the company.
Strong growth
Reliance has achieved consistent and strong double-digit growth under the leadership of Mukesh Ambani in the past twenty years. In fact, the market capitalisation of Reliance has risen at an annualised rate of 20.6 percent in the last 20 years, that is from Rs 41,989 crore in March 2002 to Rs 17.81 lakh crore in March 2022. 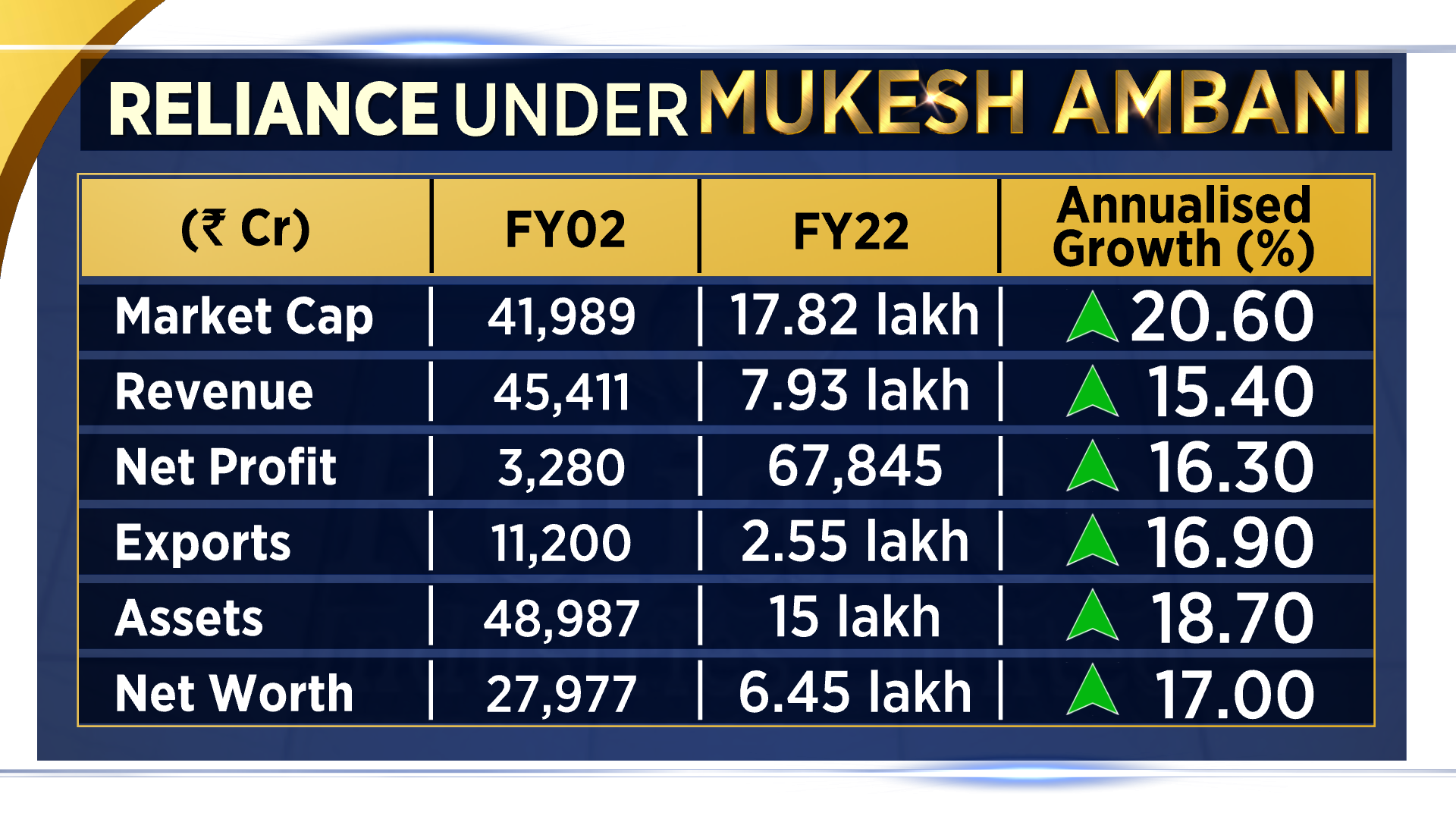 Significant investor wealth created
Reliance added Rs 17.4 lakh crore to investor wealth in the last two decades. This adds to an average of Rs 87,000 crore to investor wealth every year. In fact, according to Motilal Oswal's 26th annual wealth creation study, Reliance has emerged as the largest wealth creator, over  2016-21, creating wealth to the tune of nearly Rs 10 lakh crore and breaking its own previous record.
Traditional refining and petchem business
From a single refinery in 2002, Jamnagar is now the world’s largest single-location refining complex. The entire refining complex was built at costs much lower than comparable refineries around the world.
Reliance has added some of the world’s largest downstream units. It has set up the world’s largest refinery off-gas cracker at Jamnagar. It has a capacity of 1.5 million tonnes per annum (mtpa) along with downstream plants and utilities. RIL also added the world’s largest petcoke gasification unit.
Also Read: Reliance Retail strengthens new commerce business with Rs 2,850 crore METRO Cash & Carry acquisition
Fundraising record
Reliance set a record for capital fundraising in FY21. It raised more than Rs 2.5 lakh crore through a rights issue and minority stake sales in the Jio platform and Reliance Retail Ventures to global marquee investors. During FY2021, Reliance was the single-largest foreign direct investment (FDI) generator for India.
Meanwhile, in an interview to CNBC-TV18, Manish Chokhani of Enam Holdings said, “There is no one business because it works together as a constellation of stars that Jio is made more powerful because of its retail and retail is made for more powerful because of its broadband. The financial services will be a play alongside with what has been created on the retail side and so on. So, I do not think one should try to strip the elephant and see whether the trunk is better, or the leg is better, or the tail is better. This is an elephant which is a powerful elephant and moving with the agility of a tiger. So, it's a very rare combination and we are lucky in India to have witnessed the journey of this company and excitement about what lies ahead for them.”