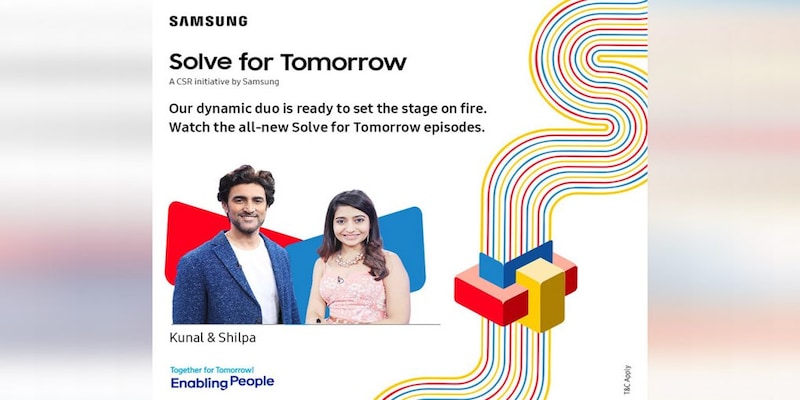 This summer, Indian tinkerers and dreamers had an unexpected windfall - the Solve for Tomorrow Competition came to India, for the very first time.

The Solve for Tomorrow competition began in 2010 in the US, with a vision to bring together young minds and empower them to achieve their full potential and pioneer positive social impact. Today, the competition is present in 33 countries, including India. The contest calls for young people between the ages of 16-22 to come forward with their solutions and ideas in the areas of Education, Environment, Agriculture and Healthcare.
The response in India has been overwhelming. When the application window opened on June 9th, 2022, the jury had no idea they would end up with over 18,000 entries. These entries were then whittled down to the Top 50 entries in Aug 2022, by a panel of social entrepreneurs, IIT faculty members, and mentors from Samsung India.
The Top 50 teams attended a design thinking online training followed by an in-person bootcamp at the FITT-IIT Campus in Delhi NCR. The boot camp consisted of sessions related to design thinking, critical thinking, meet-n-greet sessions with entrepreneurs, and motivational sessions. And now, the teams are down to the Top 10.
In the first episode of the six part Solve for Tomorrow series, hosts Network18's Shilpa Rathnam and Actor and Social Entrepreneur Kunal Kapoor talk to the various people at Samsung and FITT-IIT Delhi that are holding true to the vision of inspiring change and enabling changemakers in India through innovation.
In the second episode, Shilpa Rathnam and Kunal Kapoor talked to two of the shortlisted teams: Team Planeteers and Team Able Innovations.
Team Planeteers is an all girls team composed of Aeronautical Engineers Akshita Gaba, Nithika Pathak and Riya P Dey, who have shifted focus from outer space to our marine ecosystem. Their project, an underwater autonomous vehicle aptly named Aquarius, detects microplastics in the water, and then captures them, while leaving all forms of marine life unharmed.
Team Able Innovations comprises engineer duo Aryan Thosariwal and Pratik Raghuvanshi and their project, the Able Glasses, brings together the best of Indian Jugaad with precision engineering. The glasses use bone conduction technology to transmit sound directly to the cochlea, helping those with hearing impairments. The glasses also contain a camera that can help the visually impaired read, and a speaker that works with the camera to decode sign language used by those who cannot speak, and gives them a voice. They are the only team in the competition that is aiming to help with three types of disabilities at once.
Both teams were delighted by the support they've received so far. Team Able Innovation likened the grant money of Rs. 1 Cr to an expressway for the top 3 teams, allowing them the seed fund to create prototypes, and develop the best software and hardware in the most efficient manner. Team Planeteers, on the other hand, were most excited by their mentoring sessions. Their Samsung Mentor, Paul, was able to help them identify little flaws they can improve on, and also guided them on how to present their products in the market.
The next phase of the Solve for Tomorrow competition is set for November, when the Top 3 teams will be announced. In the meantime, you can look forward to four more episodes in this series, introducing you to the remaining eight teams.
This is a Partnered Post
Check out our in-depth Market Coverage, Business News & get real-time Stock Market Updates on CNBC-TV18. Also, Watch our channels CNBC-TV18, CNBC Awaaz and CNBC Bajar Live on-the-go!