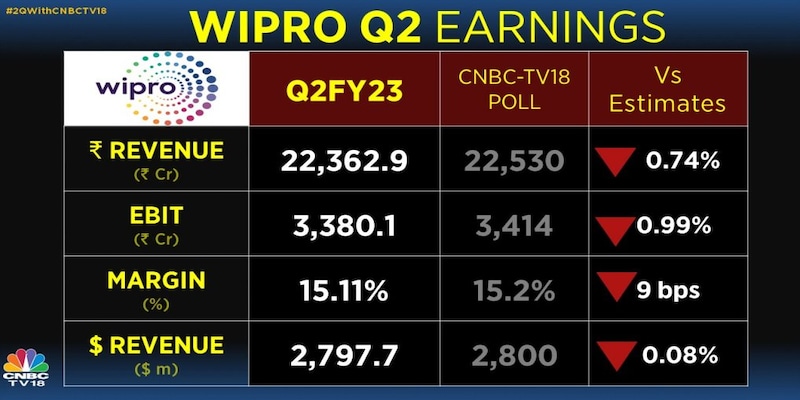 "We are acknowledging that we are in a time of more uncertainty with our guidance but we will shoot for double-digit growth," Wipro's MD & CEO Thierry Delaporte told reporters.
For the December quarter, the company expects US Dollar revenue to be in the range of $2,811 million to $2,853 million.
Revenue in US Dollar terms in the September quarter met expectations of $2,800 million. It increased 2.3 percent from the June quarter to $2,797 million.
Wipro's rupee revenue at Rs 22,362.9 crore increased 5.1 percent from the June quarter. The figure was lower than the CNBC-TV18 poll of Rs 22,530 crore.
In constant currency terms, the company grew 4.1 percent, which is the best since the June quarter of fiscal year 2022. The growth is in-line with street expectations of 4-4.2 percent.
Also Read: HCL Tech Q2: Revenue guidance raised while margin expectations toned down On the operational front, Wipro's EBIT grew 6.2 percent quarter-on-quarter to Rs 3,380.1 crore and marginally missed expectations of Rs 3,414 crore. Ebit margin increased 15 basis points from the previous quarter to 15.11 percent, marginally lower than expectations of 15.15 percent.
CFO Jatin Dalal attributed the improvement in margins to better price realisations and strong operational improvements in automation-led productivity.
The management had mentioned previously that the EBIT margin will bottom at 15 percent. However, the management does not expect a significant improvement in margin during the December quarter.
Also Read: Infosys likely to maintain guidance amid healthy revenue growth | Earnings Preview
For the September quarter, Wipro's attrition rate stood at 23 percent, down 30 basis points from the June quarter. This was the second straight quarter of moderation in the company's attrition. Voluntary attrition is measured on a trailing twelve month basis. The management is confident of attrition moderating further in the upcoming quarters.
Also Read: HCL Tech adds 8,359 employees, attrition rate unchanged at 23.8% 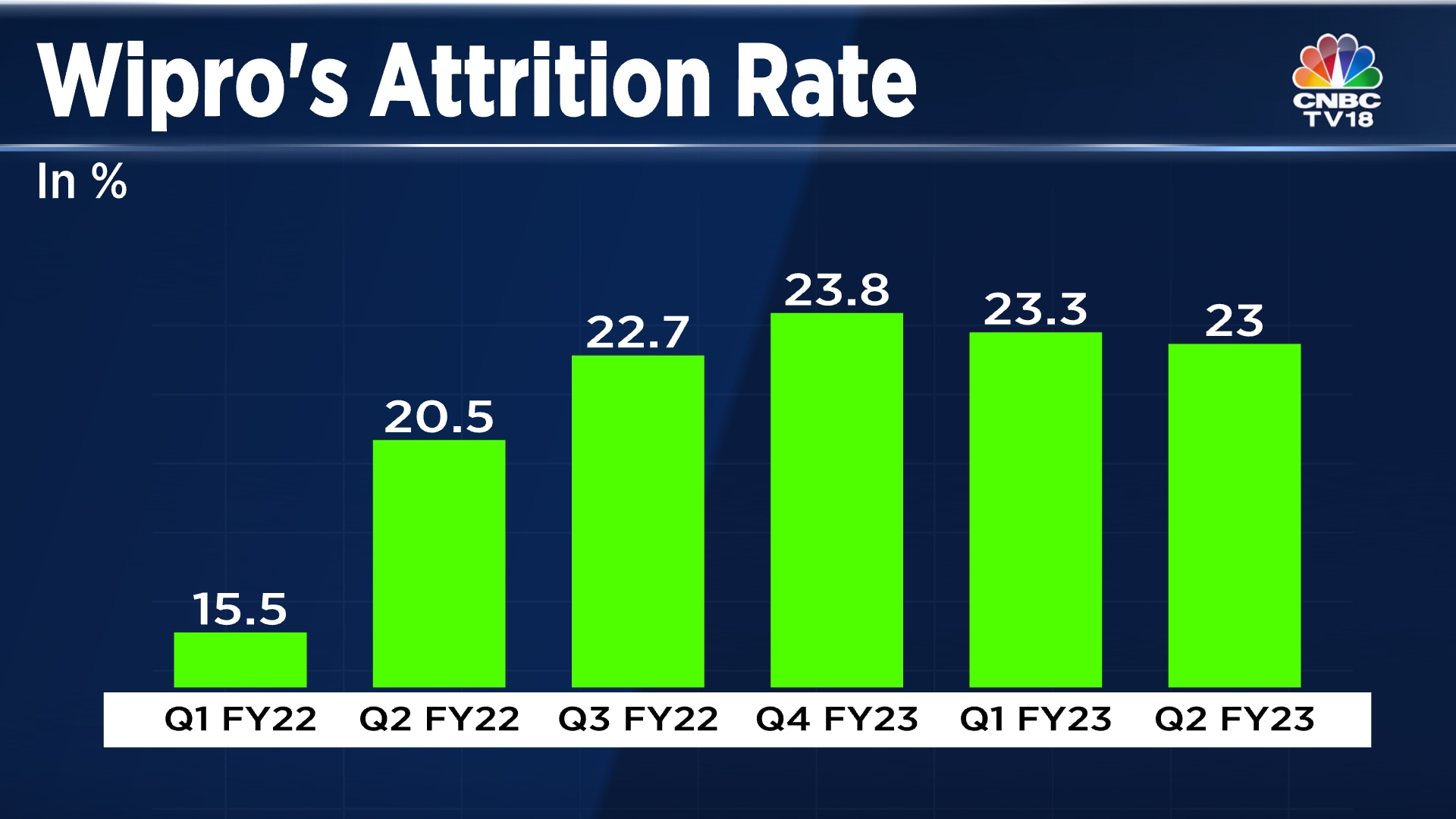 Wipro also promoted 10,000 of its employees in the September quarter and onboarded 14,000 freshers in the first half of this financial year. The company had been in the news for firing 300 employees for moonlighting and also for delaying the onboarding of a lot of freshers.
Also Read: 2,000 techies left in the lurch? Freshers detail ordeal as Wipro delays onboarding
Delaporte was categorical in his words when he said that the company does not accept moonlighting and that it is a clear position of the company that employees have to honor their contract. "We understand small side jobs but it is a question of ethics when there is a conflict of interest," he said.
He also told reporters that two out of the four core markets - Americas and Europe grew over 30 percent compared to last year. Large deal wins have also been strong, registering a growth of 42 percent in the first half of the current financial year.
The MD & CEO further added that the company has more large deals in the pipeline than ever before, saying that they are confident of winning more large deals going forward.
Check out our in-depth Market Coverage, Business News & get real-time Stock Market Updates on CNBC-TV18. Also, Watch our channels CNBC-TV18, CNBC Awaaz and CNBC Bajar Live on-the-go!