Voltas share price has been falling but Blue Star is gaining, and both are selling air conditioners

Voltas, owned by the $311 billion conglomerate Tata Group, and Blue Star, together control nearly 35 percent of the room AC market in India. Yet, the year 2022 could not have been more divergent for these two companies.
This brings us to the question that two companies, in the same industry, selling a common product, facing equal competition and inflationary pressures - yet, their share price returns on a year-to-date basis suggest otherwise.
Analysts that CNBC-TV18 spoke to attribute this divergence to a significant loss of market share for Voltas, different pricing strategies and geographic presence of both these companies. More importantly, Blue Star’s investors are gaining because Lloyds, owned by appliance maker Havells, is eating into Voltas’ market.
Let us dwell on these points individually:
Over the last 10 quarters, Voltas has lost nearly 4 percent in market share. For the September quarter of the current financial year, the company's market share stood at 22.8 percent as they stated in their earnings call, compared to the 26.8 percent peak that it had during the September quarter of financial year 2021. 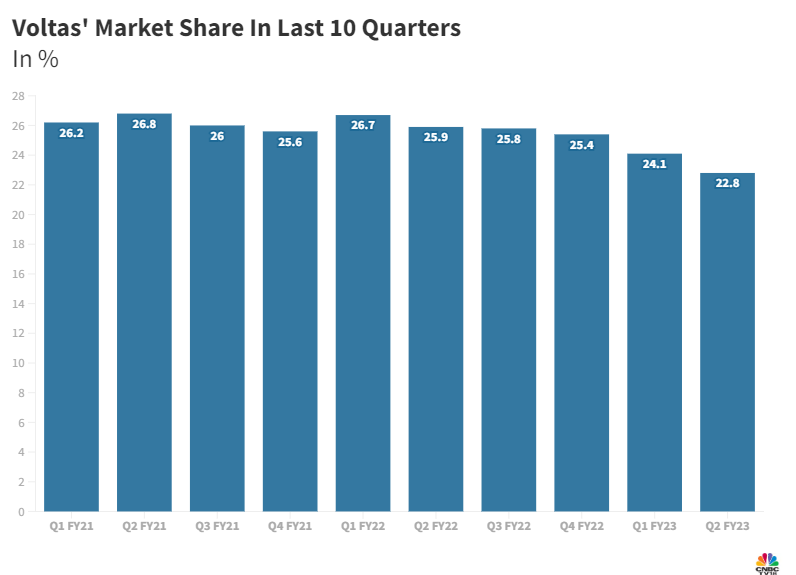 On the other hand, Blue Star may have not gained significant market share, but has not lost it either. Over the last 10 quarters, Blue Star has managed to grow its market share by 50 basis points to 13.25 percent from 12.75 percent. In an interaction with CNBC-TV18, Blue Star's management said that the company is targeting 15 percent market share by financial year 2025 and that achieving 14 percent share is possible within the next financial year.
At some level, the market is rewarding Blue Star’s resilience.
Why is Voltas losing market share?
During their March quarter earnings call of the last financial year, Voltas' management also attributed the drop in market share to price disruptions by competition. Analysts who CNBC-TV18 spoke to said that Lloyds, a brand from Havells India's stable has gained significant share in North India over the last few years. During the Covid period, when most companies struggled for supply-chain issues, Lloyd was the only player that came up with a new plant.
A report from Nomura states that between 6-7 lakh units of ACs were sold in the months of July and August. Due to relatively lower sales compared to peak season, even a sale of 10,000 units accounted for gain in market share.
Also Read: Voltas to enter bio medical refrigeration segment with Vestfrost deal
However, the Tata group company is a dominant player in the North and Southern parts of the country is trying to protect its margin on each AC sold, and at the same time, trying to limit the dent to its market share.

In the summer of 2022, Voltas earned more revenue but sold fewer ACs due to the 5-6 percent price hikes that it took in April. While Blue Star did not hike AC prices, it targeted the price-sensitive customers, and first time buyers, through, what it calls, the ‘mass premium’ range, which it launched in March 2020.
To make up for the lost market share, Voltas ended up offering additional discounts in May, according to analysts.
In a recent interview with CNBC-TV18, Blue Star's management said that they would review AC prices in January 2023, ahead of the next summer.
Going forward, Blue Star's management remains optimistic, even going to the extent of telling CNBC-TV18 that they expect an "excellent" second half of the current financial year, despite the months of winter.
For the full-year, the management expects the margin to be between 8-8.5 percent, adding that it is not seeing any form of slowdown in the order books. Voltas reported EBITDA margin of 8.5 percent in financial year 2022.
CNBC-TV18 wrote to the management of Voltas, seeking a comment, but they were unavailable for the same.
Some brokerages may have cut their price target on Voltas but have retained their buy recommendations. UBS cut its current financial year EPS estimates by 36 percent to build in weakness in demand and EBITDA margin. It expects the company's growth to taper in the near term. However, despite the cut in price target to Rs 1,330 from Rs 1,450, the brokerage has maintained its buy rating.
In fact, Nomura upgraded the stock to buy from hold on November 3, citing unsustainable competitive intensity and attractive valuations for Voltas Beko. However, it also cut its EPS estimates for financial years 2023, 2024 and 2025 by 13 percent, 9 percent and 6 percent respectively.
Citi expects the pressure on Voltas' margin due to its high-cost inventory to dissipate soon. Jefferies also expects Voltas to give double-digit returns from the current market price.
Check out our in-depth Market Coverage, Business News & get real-time Stock Market Updates on CNBC-TV18. Also, Watch our channels CNBC-TV18, CNBC Awaaz and CNBC Bajar Live on-the-go!