Uniparts India IPO: Here's everything about the company's issue that opens today

Uniparts India IPO: Here's everything about the company's issue that opens today

An Offer for Sale (OFS) means that the company will not receive any proceeds from the sale of shares.

The initial public offering (IPO) of Uniparts India, a manufacturer of systems and components for the off-market highway market in the agriculture and construction segment opens for subscription on Wednesday, November 30.

The entire issue is an Offer for Sale, where Ashoka Investment Holdings and Ambadevi Mauritius Holdings will sell their stake. Both these entities together hold 20.68 percent stake in the company currently.
An Offer for Sale (OFS) means that the company will not receive any proceeds from the sale of shares.
At the higher end of the price band, the company's implied market capitalisation would be around Rs 2,604 crore.
In an interaction with CNBC-TV18, Uniparts India Chairman & MD Gurdeep Soni said that the company is not in need of any fresh cash and the IPO is an exit for private equity investors. 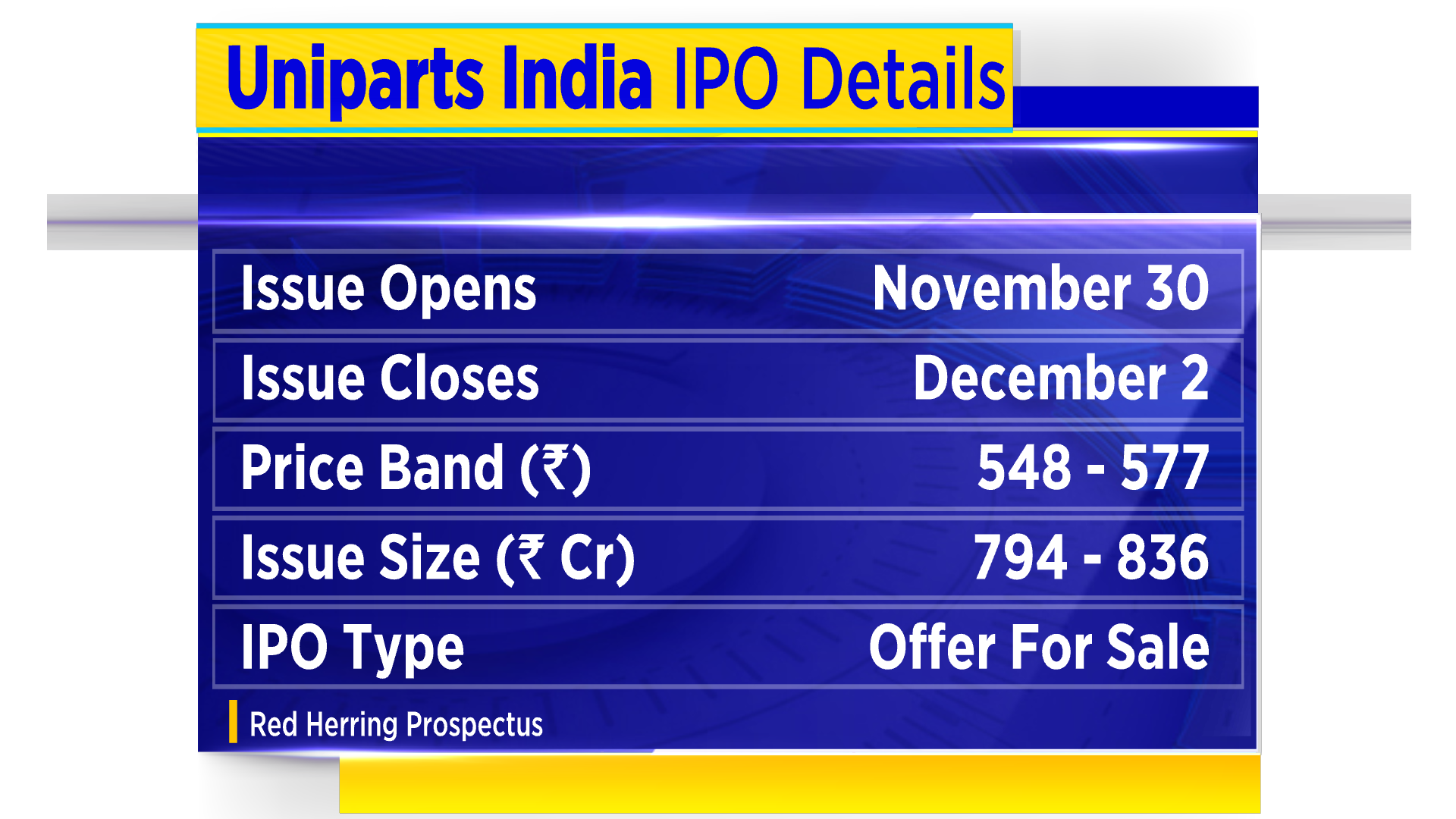 Ahead of the IPO, Uniparts India raised Rs 250.69 crore from 21 anchor investors, who subscribed to the company's shares at Rs 577 apiece. Anchor investors included Nomura, Morgan Stanley, BNP Paribas, Invesco, and Abbakus.
Uniparts India is a global manufacturer of engineered systems and solutions and is one of the leading supplier of systems and components for the off-highway market in the agriculture and construction, forestry, and mining segments. The company is present in over 25 countries.
Among the company's key products include the 3PL, which is a system that consists of different assemblies attached to an agricultural tractor. For the financial year 2022, 3PL contributed to more than half of the company's overall topline. Uniparts expects the global market for 3PL, valued at $370 million in 2021, to grow between 6-8 percent between 2021-2026.
PMP is another key product from the company's stable that are structural and load bearing parts of the equipment, varying in design and technical specification.
The company's RHP says that it had a 16.68 percent market share in the global 3 PL market and a 5.92 percent market share in the global PMP market. Uniparts India's revenue is diversified across geographies and only 13.4 percent of its revenue in financial year 2022 came from the Indian market. The US contributed to nearly half of the company's total topline.
Uniparts India's capex spend is 3 percent of the company's overall topline and that it plans on spending Rs 45 crore as capex during the current financial year.
The company has a diversified revenue base courtesy long-term relationships with key global customers, including major OEMs. Four out of its top five customers, TAFE, Class Tractors, and Kramp have been their customers for over a decade. 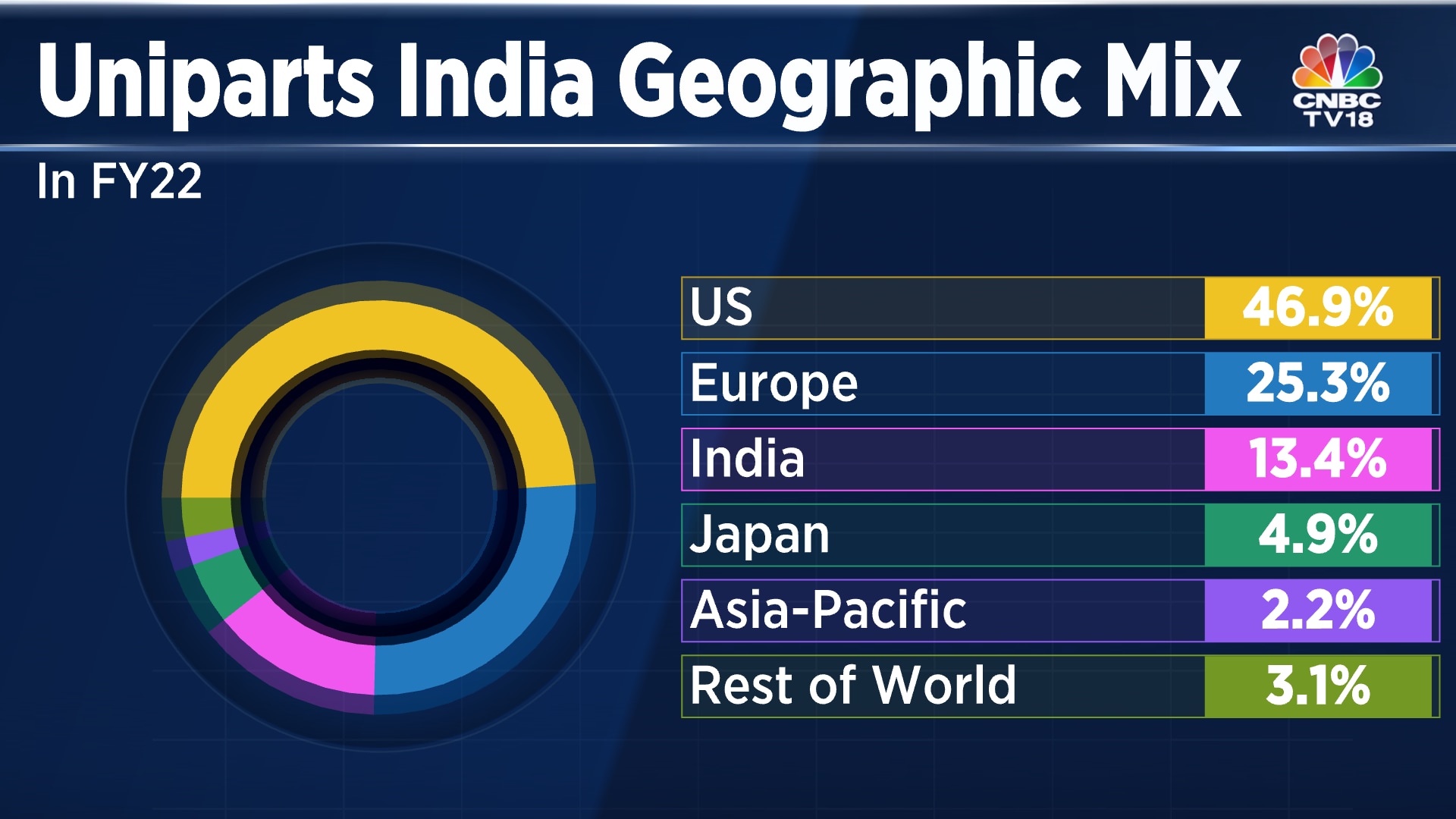 Uniparts India has five manufacturing facilities in the country, including two in Ludhiana, one at Visakhapatnam, and two in Noida. In the US, the company has a manufacturing, warehousing, and distribution facility in Iowa, which it acquired post its acquisition of Olsen Engineering in 2005. It also has a warehousing and distribution facility in Germany, which is a base for their key European customers. Other than the issue being a complete offer for sale with no fresh issue of equity shares, here some other risk factors associated with Uniparts India's IPO:
Revenue Concentration
As of June 30, 2022, nearly 78 percent of Uniparts India's topline came from sales to Original Equipment Manufacturers (OEMs). Within the OEM segment, the top 10 customers contributed to 71 percent of the segment revenue. The company's top 10 customers across segments and geographies also contributed to 71.3 percent of the company's overall topline as of June 30.
The company further mentioned that business is impacted by cyclical effects in the global and domestic economy, particularly in the agricultural sector.
Singh also mentioned that the company has a lot of customer stickiness and John Deere, one of the world's biggest tractor manufacturer contributes to 33 percent of the overall revenue.
Forex Fluctuations
The company in its Red Herring prospects mentions that it is exposed to foreign exchange rate fluctuations with regards to its borrowings, mostly in US Dollars. Their revenue, operating expenses, and finance costs are influenced by currencies of countries where they manufacture or sell products like the US, Europe and Japan.
A stronger Indian rupee would mean overseas sales and revenue will be adversely impacted and vice versa. As mentioned earlier, nearly 87 percent of the company's revenue comes from the export market.
The RHP also states that the company's arrangements with several of its customers do not include a provision for exchange rate fluctuations. "Accordingly, our ability to pass on the impact of future foreign currency fluctuations and reset prices with customers is therefore limited," the company said.
What Are Brokerages Saying?
ICICI Direct has assigned a subscribe rating to Uniparts India's IPO citing healthy financials, precision component product profile and inexpensive valuations.
Marwadi Financial Services has also cited reasonable valuations compared to peers, and market leading presence in global off-highway vehicle systems, as the rationale behind their subscribe rating on the IPO.
Motilal Oswal believes that Uniparts India is well placed to capture the growing industry opportunity in the tractor and constructor equipment space. Its efforts to move up the value chain has led to strong earnings recovery and expand addressable market as well as customer base. The brokerage has also assigned a subscribe rating to the IPO given the huge capex plans of the Indian and US governments.
Check out our in-depth Market Coverage, Business News & get real-time Stock Market Updates on CNBC-TV18. Also, Watch our channels CNBC-TV18, CNBC Awaaz and CNBC Bajar Live on-the-go!
Tags