Tata Consumer Products is taking a price hike in salt, one of its core categories, to protect margins as inflationary pressure remains mainly due to higher energy cost.

“We are taking up or we are in the process of taking up a price increase to set margins right,” said Sunil D'souza, MD & CEO, Tata Consumer Products, in an interview with CNBC-TV18.
“On the salt, there is continued pressure. Salt costs are driven by two components. One is brine, which is sort of flat after going up last year and energy is the big spoiler out here… And that's why you're seeing the stress on the salt margins,” he added.

Tata Consumer on Wednesday reported its first-quarter earnings with overall a good set of numbers on strong food & beverages business as tea business offset inflationary pressures in salt.
“Our gross margins on tea now have come back to what they should be in long term,” said D'souza, adding that premiumisation is beginning to play.
The profit increased 38 percent year-on-year (YoY) to Rs 255 crore in the June quarter as compared to Rs 240 crore during the same period last year. However, it was slightly lower than CNBC-TV18’s poll estimates of Rs 259 crore.
The company’s revenue increased 10.6 percent YoY to Rs 3,326 crore against Rs 3,008 crore while the EBITDA or earnings before interest, taxes, depreciation, and amortization – a measure of a company's overall financial performance – increased 14.4 percent to Rs 457.3 crore against Rs 399 crore. The margin was also in line with expectations, up 50 basis points to 13.8 percent from 13.3 percent. 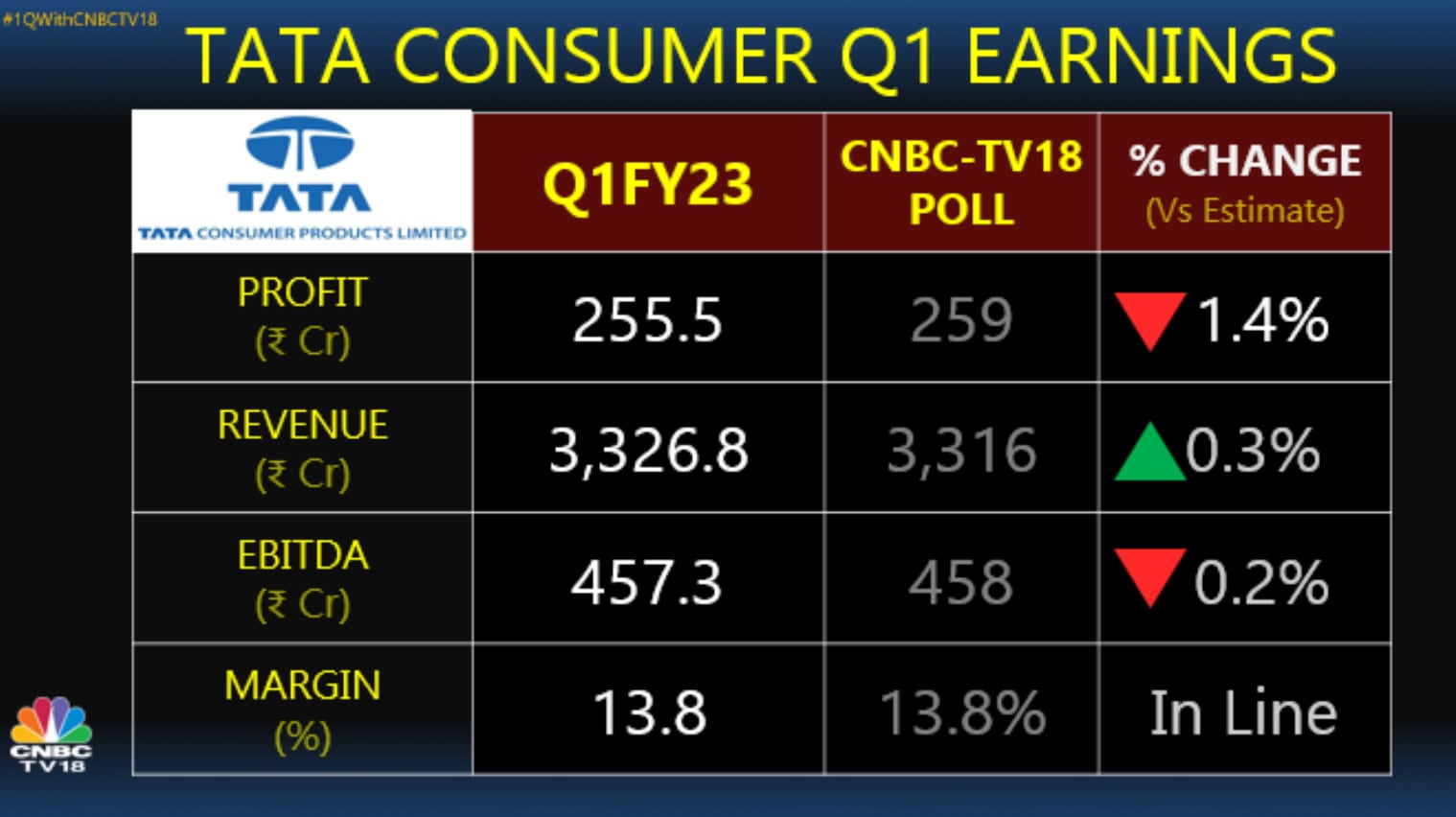 The India foods business grew in line with expectations, up 19 percent in Q1. Tata Sampann portfolio witnessed a rise of 6 percent.
Market share rose in both core categories, tea and salt, up by 40 basis points and 400 bps, respectively.
However, the company is seeing some pricing pressure in the lower end of tea portfolio, according to D'souza, who added that the drop in tea rates would be about 10 percent to drive volumes.
“It will be in the high single digits. That's about it. Because in the mid to higher end of the portfolio, we have not given back pricing, where we are seeing stress in specific geographies, especially in the Hindi belt in the rural areas. That is where we've gone aggressive to sort of give an injection to the volume growth again,” he said.
The branded business' India revenue grew 8.8 percent to Rs 2,145 crore YoY from Rs 1,971 crore while international revenue jumped 9 percent to Rs 836.6 crore YoY from Rs 767.6 crore.  Non-branded revenue was up 26.7 percent to Rs 351 crore.
Ad spends for the company went up by 33.7 percent to Rs 211.6 crore against Rs 158.21 crore YoY. As a percentage of sales, the ad spends were 6.4 percent in the last quarter against 5.3 percent.
The company's focus now remains on volume. "We're going for massive distribution expansion in urban and rural," added the CEO. The stock was trading nearly 2 percent lower at Rs 777 per share on BSE at the time of writing. It has gained 1.51 percent in the last one month and 4.55 percent this year so far.
Check out our in-depth Market Coverage, Business News & get real-time Stock Market Updates on CNBC-TV18. Also, Watch our channels CNBC-TV18, CNBC Awaaz and CNBC Bajar Live on-the-go!