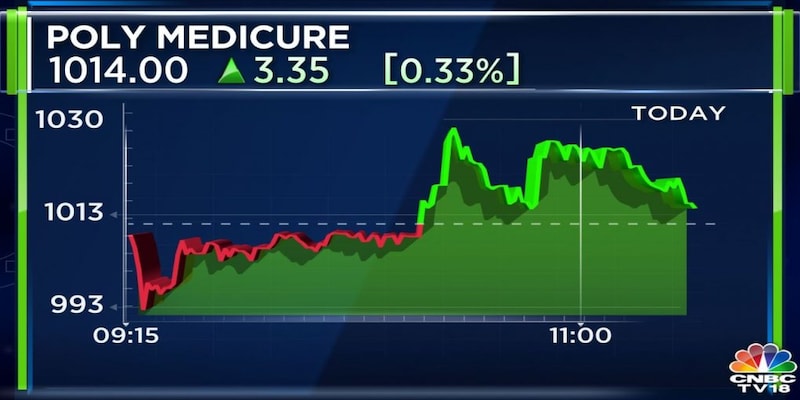 Poly Medicure is likely to benefit from the depreciation of the rupee as it receives over 65 percent of its revenue from exports. Raw material prices too have corrected from highs. The company said that it expects 200-250 basis point improvement in the company’s margin on account of this rupee deprecation.

Poly Medicure is likely to benefit from the depreciation of the rupee as it receives over 65 percent of its revenue from exports. Raw material prices, too, have corrected from highs. The company expects a 200-250 basis point improvement in its margin on account of this rupee deprecation.
The rupee depreciated by 32 paise or 0.4 percent to hit a record low of 82.64 against the dollar on Monday before making up lost ground. It had slipped below the 82 mark for the first time ever in the previous session.
Speaking to CNBC-TV18, Himanshu Baid, MD at Poly Medicure, said, "Rupee depreciation is really going to help the company in the long run. Also, raw metal prices have softened in the last three to four months, I think that will also benefit the company."
On margin, Baid said, "When we net off our imports and exports, we will have almost our surplus of around $50 million, let us say when we net off everything. Based on that, I think that will be around 40 percent of the company's revenue when we net it off. Based on that, I think we would see 200 to 250 basis points of profit margin overall."
He added, "We will see more improvement in quarter three and four. But from quarter two onwards, we already see a positive trend." On growth, Baid said 20 percent revenue growth is on the cards for financial year 2023. “One-third would be domestic and two-thirds will be export. Exports actually have grown better in last few months. But I think overall, we see exports growing around 20 percent plus and domestic market going to 25 percent of plus," he said.
The company has started manufacturing dialysis machines indigenously dialysis machines and the company aims to sell around 500 machines by next year. They have already placed 140 machines till now.
Watch video for more.
Also Read: Jaypee group firms clear divestment of cement unit to reduce debt
Check out our in-depth Market Coverage, Business News & get real-time Stock Market Updates on CNBC-TV18. Also, Watch our channels CNBC-TV18, CNBC Awaaz and CNBC Bajar Live on-the-go!