Patanjali Foods reported its earnings for the first quarter of financial year 2023 on Wednesday with a revenue growth of 37 percent and the profit jumping sharply, aided by a 5x rise in other income.

Patanjali Foods on Thursday said that it expects its edible oil sales to continue to grow going forward with the prices declining. The edible oil prices have declined between 18 percent and 26 percent in the first quarter of financial year, it said.
According to recent reports, the edible oil prices are likely to further come down by Rs 10-12 as processors and manufacturers pass on the benefits of a fall in global prices to consumers.
Edible oil prices had surged sharply in the recent times due to Indonesia banning exports of palm oil to other nations and the Ukraine-Russia war. India imports about two-thirds of its total edible oil consumption.
A major reduction in edible oil prices came after Indonesia lifted the ban on palm oil exports, helping global prices.
Patanjali Foods reported its earnings for the first quarter of financial year 2023 on Wednesday with a revenue growth of 37 percent and the profit jumping sharply, aided by a 5x rise in other income. Margins, however, have taken a hit due to inflation in edible oil earlier. 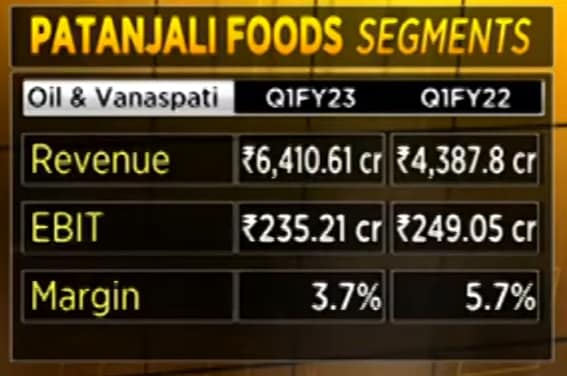 This, despite the Indian imports dropping anywhere between 8 percent and 10 percent in the first quarter, said the company.
“Our volumes are growing despite the Indian imports dropping substantially. Our volumes went up by 4 percent, so that is positive. We are expecting that this should continue to grow at the same pace and we are accelerating our edible oil volumes further," said Sanjeev Asthana, Chief Executive Officer, Patanjali Foods. The company’s market share in the edible oil segment is around 8 percent.
It expects food revenue of around Rs 4,500-5,000 crore for the current year. “Food on a standalone basis, the business part of it, should generate close to Rs 4,000 crore on an annual basis. So typically every quarter we should be hitting close to about Rs 1,000 crore,” said Asthana. 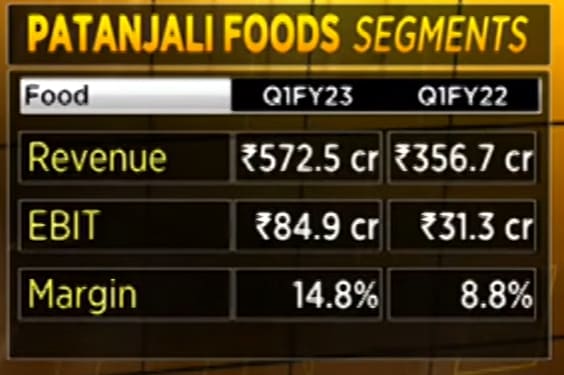 The stock was trading flat at Rs 1120 per share on BSE at the time of writing. It has gained 7.41 percent in the last one month and 31.7 percent during the year so far.
For the full interview, watch the accompanying video
Check out our in-depth Market Coverage, Business News & get real-time Stock Market Updates on CNBC-TV18. Also, Watch our channels CNBC-TV18, CNBC Awaaz and CNBC Bajar Live on-the-go!