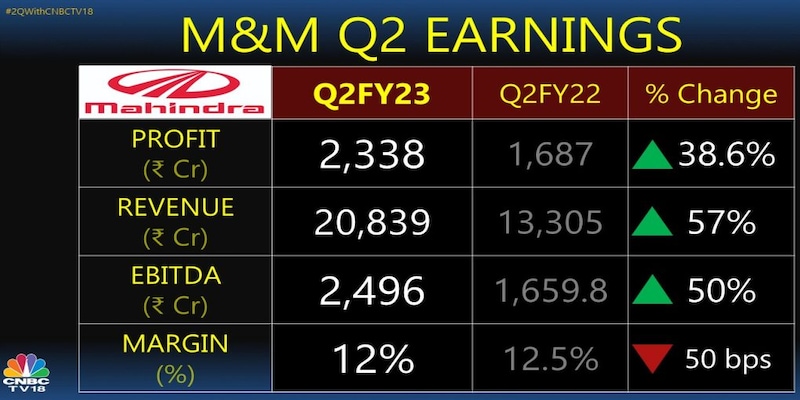 Mahindra & Mahindra Ltd (M&M), India's second most valued automaker by market cap, on Friday reported its highest ever quarterly revenue in the July-September period, both on a standalone as well as consolidated basis. The company's net profit for this quarter stood at Rs 2,338 crore, up 39 percent as compared to the year-ago quarter.
While most earnings parameters of the company were higher than the CNBC-TV18 poll, the company's EBITDA margin was in-line with what the street was working with. On a year-on-year basis,  M&M's revenue increased 57 percent while EBITDA saw growth of 50 percent. However, its EBITDA margin fell 50 basis points from last year and was nearly flat when compared to the June quarter. 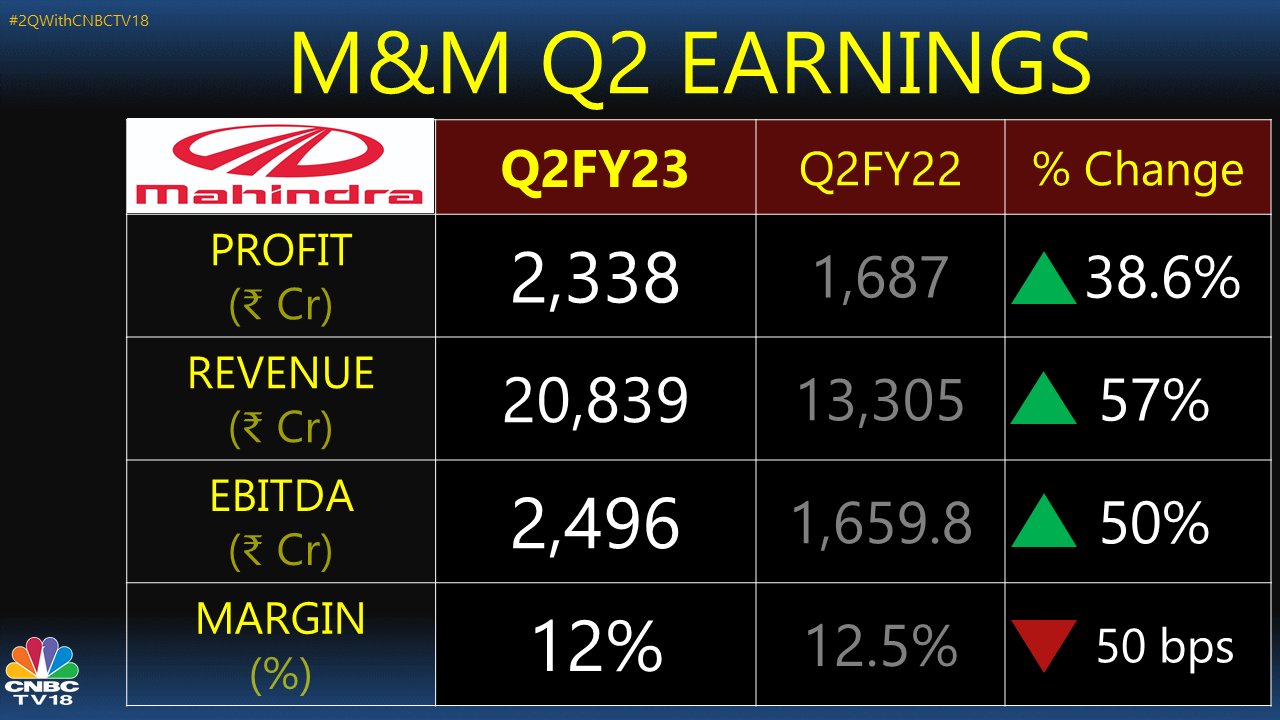 There was also an exceptional item worth Rs 247.86 crore, which pushed the profit figure down to Rs 2,090 crore. The exceptional item was classified as impairment provisions for long-term investments and gains on the sale of certain investments. On a consolidated basis, the exceptional item was worth Rs 706.14 crore.
Market expert Prakash Diwan is "fascinated" with the kind of comeback M&M has made in recent times, especially on the Passenger Vehicles front. "We all understand that the farm equipment segment is a bit weak, but the PV segment has made up for all those weaknesses elsewhere," he told CNBC-TV18 in an interview post the earnings.
Diwan expects the next big trigger for M&M to be the scale-up in electric vehicles.
Mahindra & Mahindra is now the market leader in the SUV segment for three consecutive quarters in terms of revenue market share. Within the Light Commercial Vehicles segment (2-3.5T), the company achieved a 60 percent market share in the September quarter, a growth of 10.8 percent from the same period last year.
Electric three-wheelers also achieved their highest ever quarterly billing of 10,625 units.
Within the farm equipment segment, the company had a market share of 41.5 percent for the first half of the current financial year. Domestic volumes were the second-highest ever while exports were the highest during the quarter.
Revenue in M&M's automotive business increased 86 percent from last year to Rs 14,725 crore.
Piyush Parag of Sharekhan attributes this growth to the price hikes taken by the company, as well as fewer discounts that they offered during the initial festive season days.
Both Diwan and Parag believe that commentary from the management on tractor demand will be key, especially with competition coming up with medium-term plans of their own.
However, shares of M&M have given up gains from earlier in the day and are currently trading 0.3 percent lower at Rs 1,294.25. Ahead of earnings, shares of M&M had gained nearly 60 percent this year, ranking among the top performers on the Nifty 50 index.
Check out our in-depth Market Coverage, Business News & get real-time Stock Market Updates on CNBC-TV18. Also, Watch our channels CNBC-TV18, CNBC Awaaz and CNBC Bajar Live on-the-go!