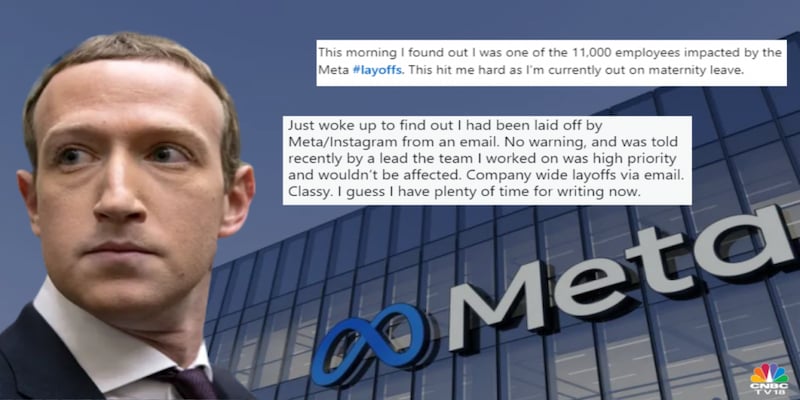 An employee Carlos Giffoni took to Twitter and said “Just woke up to find out I had been laid off by Meta/Instagram from an email. No warning, and was told recently by a lead the team I worked on was high priority and wouldn’t be affected. Company wide layoffs via email. Classy. I guess I have plenty of time for writing now,”

The internet is abuzz with stories of Meta employees who recently became ex-employees after the parent company of Facebook said that it would let go of more than 11,000 employees. The employees have taken to social media to share their accounts of finding out they were laid off on Wednesday.

Himanshu V is one of the over 11,000 Meta employees who have been impacted by mass layoffs.  The IIT-Kharagpur graduate in a LinkedIn post said he has “no idea” what is next in store for him.
“I relocated to Canada to join #Meta and 2 days after joining, my journey came to an end as I am impacted by the massive layoff. What's next for me? Honestly, I have no idea! I'm looking forward to whatever comes next.”
A former communication manager at Facebook, Aneeka Patel, took to LinkedIn and wrote: “This morning I found out I was one of the 11,000 employees impacted by the Meta #layoffs. This hit me hard as I’m currently out on maternity leave." She said she was grateful for working at Meta and now will focus a few months on dedicating her time to her daughter and will take up some roles in communication after that.
Want to know more about what all Mark Zuckerberg said while announcing the layoff? Read this
Former product marketing lead Sabina Sequeria also took to LinkedIn and said that although she was laid off after nearly five years of service at Meta, she was still thankful for working with incredibly talented individuals to build Groups, Video, and Events products at Facebook.
Despite the optimism from several laid-off staff, not all ex-employee responses were positive.
While announcing the layoff of 13 percent of the workforce, the CEO of Meta apologised to the workforce for overinvesting in the business and admitted that he "got this wrong," calling the layoffs a "last choice." On Wednesday morning, the layoffs were communicated to the workers by email.
An employee Carlos Giffoni took to Twitter and said, “Just woke up to find out I had been laid off by Meta/Instagram from an email. No warning and I was told recently by a lead the team I worked on was high-priority and wouldn’t be affected. Company-wide layoffs via email. Classy. I guess I have plenty of time for writing now.”
Another former employee tweeted that we only have a "short period" to find another job due to their immigration status. Former Meta Recruiter Brianna Sgro took to LinkedIn and wrote, "I'm sad, hurt, uncertain, disappointed, and now jobless."
Also Read:
Meta offers immigration support to H-1B visa holders impacted by its lay-offs
Meanwhile, Mark Zuckerberg said that for those who are working on a visa, there’s a notice period before termination and some visa grace periods, which means everyone will have time to make plans and work through their immigration status. "We have dedicated immigration specialists to help guide you based on what you and your family need," he said.
While announcing the layoff, the company also said that everyone impacted would receive their November 15, 2022, vesting and the firm would also cover the cost of healthcare for people and their families for six months.
"We’ll provide three months of career support with an external vendor, including early access to unpublished job leads," Meta said.
Also Read: Twitter layoffs: One employee receives anniversary gift after being fired, another laid off for helping others
Check out our in-depth Market Coverage, Business News & get real-time Stock Market Updates on CNBC-TV18. Also, Watch our channels CNBC-TV18, CNBC Awaaz and CNBC Bajar Live on-the-go!