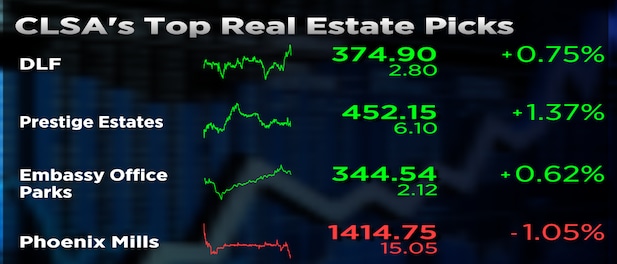 India's real estate sector is likely to have a muted performance this year as indicated by broking firm CLSA's 2023 outlook on the space.

The firm expects growth in the housing segment to moderate to 10 percent compared to last year while that in the office segment is likely to remain flat.

However, the brokerage did say that office space demand will rebound once physical attendance in offices nears pre-Covid levels but that will happen over the next two to three quarters.

It also remains positive on the housing upcycle in the medium-to-long term with a hope that the interest rate cycle will reverse in financial year 2024.

The Reserve Bank of India has already hiked interest rates five times in a row with policy repo rate now at 6.25 percent.

DLF, Prestige Estates, Embassy Office Parks REIT and Phoenix Mills are CLSA's top picks from within the real estate basket.
The firm has upgraded Phoenix Mills to buy from the earlier rating of outperform and also raised its price target to Rs 1,711 from Rs 1,688 earlier.
CLSA believes that same store rental growth for malls can be at 12 percent this year and that accelerated momentum will continue for discretionary categories like apparel, QSR, footwear, jewellery and beverages.

Also upgraded was Godrej Properties to outperform from the earlier rating of underperform. However, CLSA cut its price target to Rs 1,417 from Rs 1,523 earlier citing a weak profitability outlook.